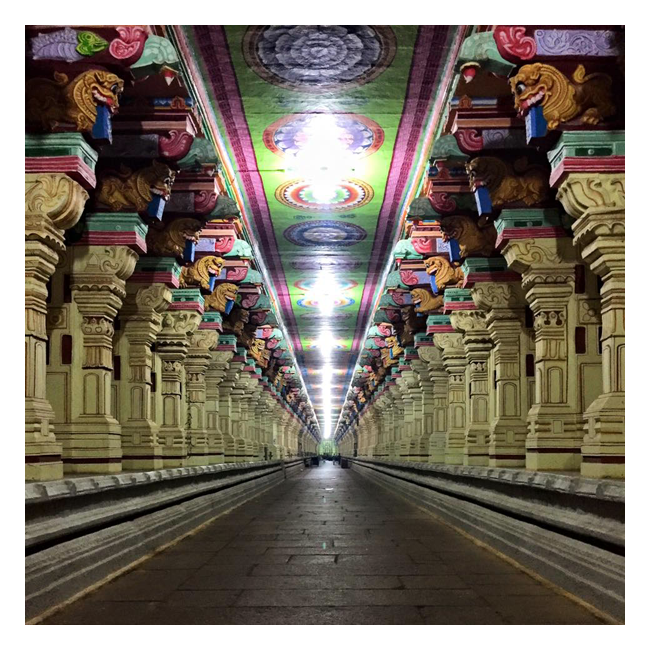 Ramanathaswamy Temple is a Hindu Temple dedicated to the god Shiva.

Rameshwaram Temple or Ramanathaswamy Temple is located on the Rameshwaram Island in Tamil Nadu.

Till the 10th century the Rameswaram temple was in the form of a small thatched shed, which was maintained under the governance of a saint. The temple and its structural constructions as we see now are mainly evolved between the period of 12th and 16th century CE by various kings. Rameshwaram temple has the longest corridor among all Hindu temples present in India.

It is one of the most important pilgrimage sites for the followers of Hinduism.   It is one of the 12 Jyothirlinga temples of Lord Shiva, where the lord is worshipped in the form of a pillar of light.  It is considered as one of the holy Char Dhams, which includes Badrinath, Puri and Dwarka, other than Rameshwaram.

Thousands of devotees throng to this historical temple throughout the year. 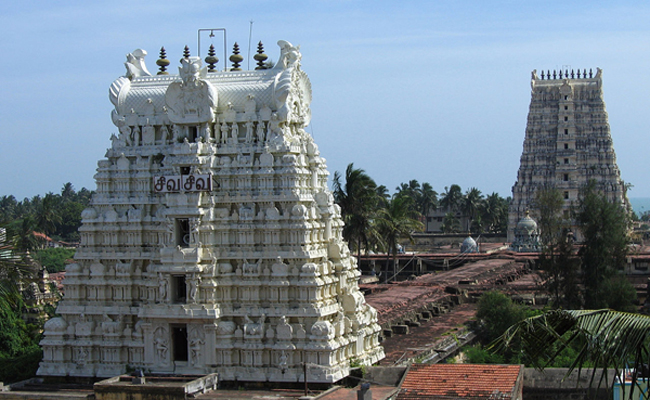 Stretched over a vast area of 15 acres, Ramanathaswamy Temple is the typical specimen of Dravidian style of architecture. High fortifications encircle the temple, making a rectangle along with big pyramidal spires ‘gopura’ doorways on every side.
The skyscraping gopurams truly dominate the skyline of Rameshwaram.

Till the 10th century the Rameswaram temple was in the form of a small thatched shed, which was maintained under the governance of a saint. The temple and its structural constructions as we see now are mainly evolved between the period of 12th and 16th century CE by various kings. Like all ancient temples in South India, there is a high compound wall on all four sides of the temple premises, measuring about 865 feet from east to west and 657 feet from north to south. There are huge towers (Gopurams) to the east and the west and finished gate towers to the north and south of the premises. The eastern Rajgopuram (spire) soars to the height of 126 feet. However, the western ‘gopuram’ is not as high as the eastern ‘gopuram’, still it is equally captivating. The temple comprises numerous ‘mandaps’ having small shrines, dedicated to other deities. The colossal image of Nandi [Lord Shiva’s Bull] captures the attention, due to its sheer size. It measures 12 feet in its length and 9 feet in its height.

* I was very much interested in finding out about which dynasty the temple was constructed. Surprisingly, very little information exists. Even wikipedia does not have much information on it. Then I found this one site which has the best information on every aspect of the temple: “History of Rameshwaram”… click here.. 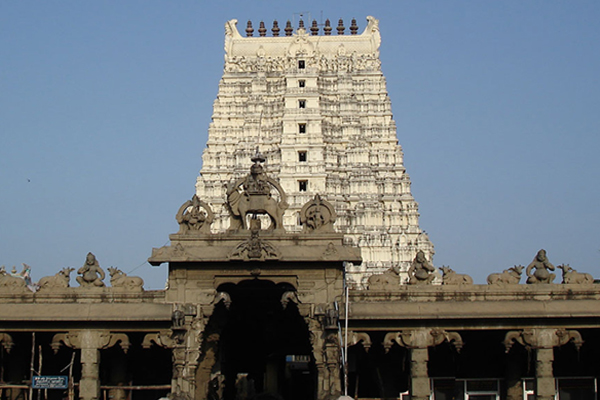 Rameshwara literally means “Lord of Rama”. The primary deity of the temple is Ramanathaswamy [Shiva] in the form of lingam.
According to a popular legend, it was Lord Rama who installed this Linga here.

There is another story about the lingam at the temple.
The Ramanathaswamy Temple is one of the 12 jyothirlingas.
In this temple Lord Shiva is worshipped as a Jyothirlinga [Pillar of Light] and is one of the 12 Jyothirlinga temples.
The Jyothirlinga of this temple has got another story behind it. As per Shiv Mahapuran, once Brahma [the Hindu God of creation] and Vishnu [the Hindu God of preservation] had an argument in terms of supremacy of creation. To test them, Shiva pierced the three worlds [Triloka] as a huge endless pillar of light, the jyotirlinga. Vishnu and Brahma split their ways to downwards and upwards respectively to find the end of the light in either directions. Brahma lied that he found out the end, while Vishnu conceded his defeat. Shiva appeared as a second pillar of light and cursed Brahma that he would have no place in ceremonies while Vishnu would be worshipped till the end of eternity. The jyotirlinga is the supreme partless reality, out of which Shiva partly appears. The jyothirlinga shrines, thus are places where Shiva appeared as a fiery column of light. There are 12 auspicious jyothirlingas, Ramanathaswamy Temple being one of them. At all these sites, the primary image is lingam represents the beginningless and endless Stambha pillar, symbolizing the infinite nature of Shiva.

Ramanathaswamy Temple is one of the Char Dham [four divine sites].
The temple is one of the holiest Hindu Char Dham [four divine sites] sites comprising Badrinath, Puri and Dwarka. Though the origins are not clearly known, the Advaita school of Hinduism established by Sankaracharya, who created Hindu monastic institutions across India, attributes the origin of Char Dham to the seer. The four monasteries lie across the four corners of India and their attendant temples are: Badrinath Temple at Badrinath in the North, Jagannath Temple at Puri in the East, Dwarakadheesh Temple at Dwarka in the West, and Ramanathaswamy Temple at Rameswaram in the South. 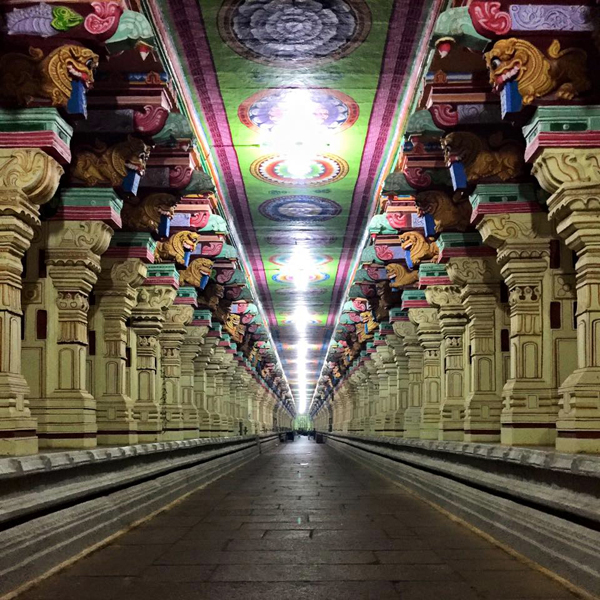 Temple Corridors:
The temple has also got the distinction of having the longest corridor among all the temples in India. There are three sets of corridors which have beautiful sandstone pillars, beams, ceiling and striking interiors. This pillared corridor extends to 4000 feet in length, embracing more than 4000 pillars. Erected on a raised plinth, granite pillars are intricately carved with beautiful images. A hard fact about this corridor reveals that the rock doesn’t belong to the island and it was imported from somewhere across the sea. 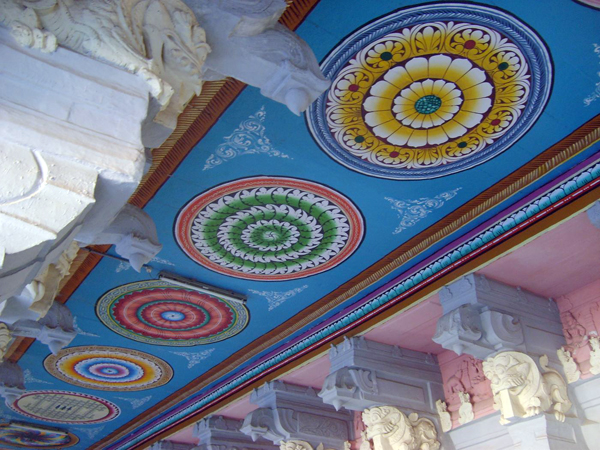 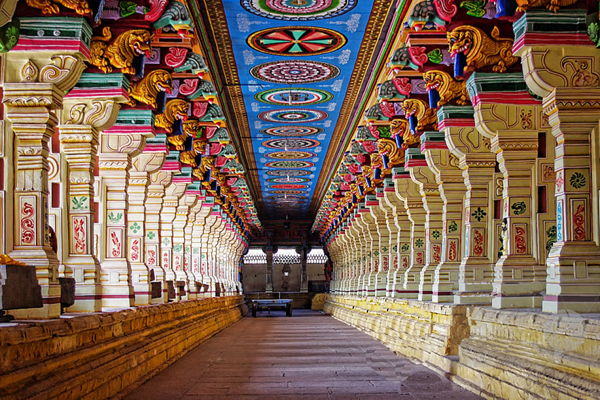 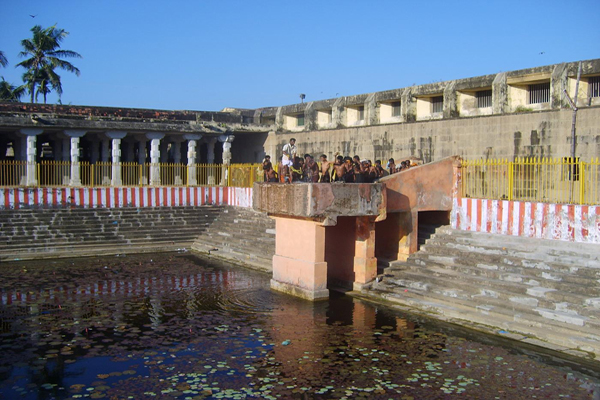 Twenty Two Tanks /Wells
Another important aspect of the temple is the bath at the temple tanks which is considered auspicious by Hindus. Ramanathswamy Temple has twenty two wells in its complex. Being the main attraction of this temple, the wells are also recognized with their distinct properties. All of these wells have water of different taste, temperature, salinity and have curative properties as well. It is said that these wells were made by Lord Rama himself, when he fired arrows in the sand. 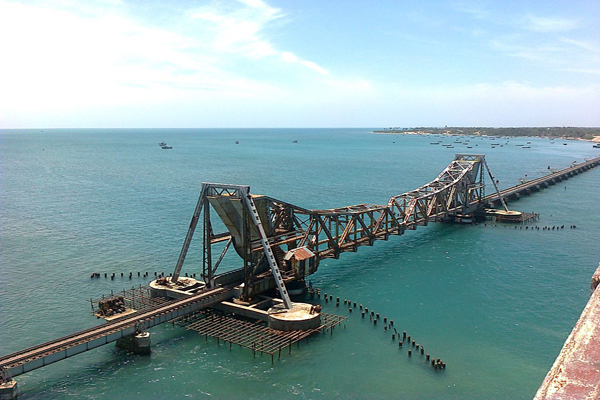 As mentioned earlier, the Ramanathswamy Temple is situated on Pamban Island also known as Rameswaram Island. It is an island located between peninsular India and Sri Lanka. The island is a part of India and forms the Ramanathapuram district of the state of Tamil Nadu. The principal town in the island is the pilgrimage centre of Rameswaram. 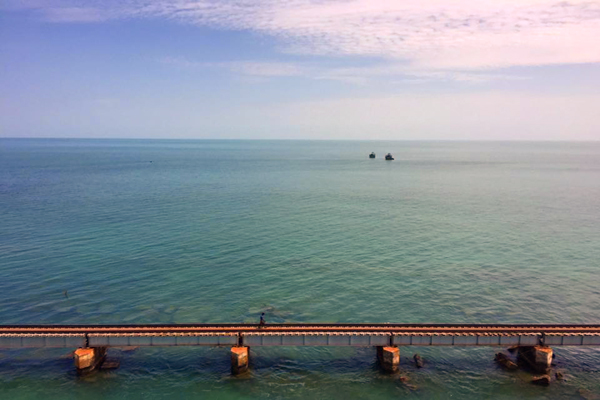 RAMA SETU:
Rameshwaram is famous for Rama Setu [Rama’s bridge or Adam’s bridge], was a former land connection between India and Sri Lanka. Rama Setu is a chain of limestone shoals, between Pamban Island [off the south-eastern coast of Tamil Nadu, India], and Mannar Island [off the north-western coast of Sri Lanka]. Geological evidence suggests that this bridge is a former land connection between India and Sri Lanka. The bridge is 50 km [30 mi] long. It was reportedly passable on foot up to the 15th century until storms deepened the channel: temple records seem to say that Adam’s Bridge was completely above sea level until it broke in a cyclone in 1480.

The bridge was first mentioned in the ancient Indian Sanskrit epic Ramayana of Valmiki. The name Rama’s Bridge or Rama Setu refers to the bridge built by the Vanara (ape men) army of Rama in Hindu theology with instructions from Nala, which he used to reach Lanka and rescue his wife Sita from the Rakshasa king, Ravana.