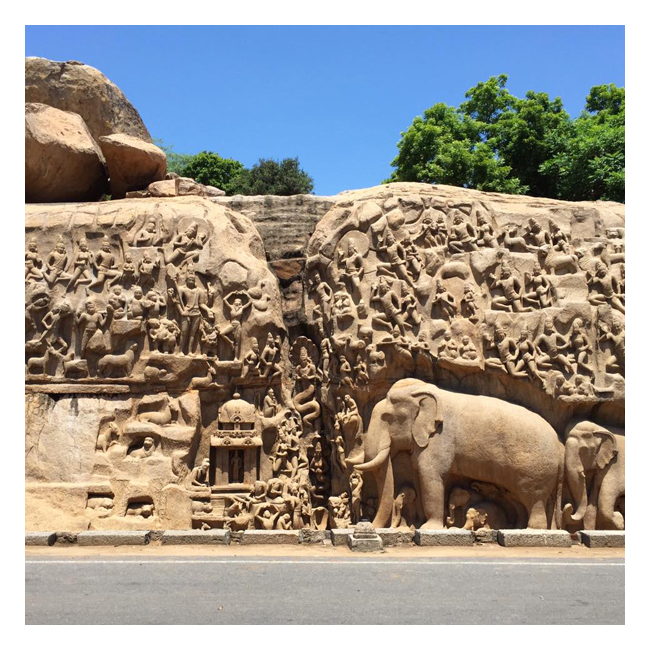 The site was inscribed inscribed on the World Heritage List in 1984.

The monument complex on the Coromandel Coast of the Bay of Bengal, in Kancheepuram district, Tamil Nadu, India. It is located near Chennai. With approximately 40 sanctuaries, including the largest open-air rock relief in the world. By the 7th century Mahabalipuram a port city of the South Indian dynasty of the Pallavas.

The Group of Monuments at Mahabalipuram that has been classified as a UNESCO World Heritage Site includes:
Rathas, or Temples in the form of chariots,
Mandapas, also called Cave Temples,
Giant open-air reliefs, such as the famous ‘Descent of the Ganges’, and
Shore Temple of Rivage, with thousands of sculptures to the glory of Shiva.

It is known especially for a group of sanctuaries carved out of rock in the 7th and 8th centuries by the Pallavas. 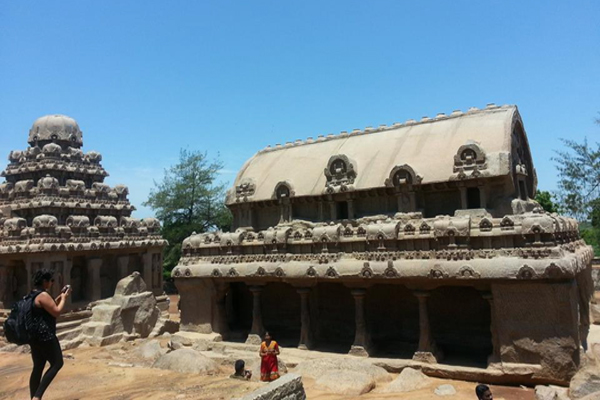 Ratha Temples / Temples are temples carved in the shape of chariots.

Ratha Temples are temples carved in the shape of chariots. These are five monolithic structures carved in diorite or granite rocks which project above the sandy beach and appear like chariots on a tableau or procession. The five Rathas, also known as the Pandava Rathas (Pandavas were five brothers and their common wife Draupadi of the epic Mahabharata) dated to the 7th century reign of the Pallava Dynasty are the Dharmaraja Ratha, the Bhima Ratha, the Arjuna Ratha, the Nakula and Sahadeva Ratha, and the Draupadi Ratha. They are carved from a single rock but with different layouts. They were not fully completed and hence no worship is offered in any of these temples. Apart from these five rathas there is also another ratha which was built in the late 7th century known as the Ganesha Ratha. The dating of this ratha is based on an inscription of the name of Parameshvaravarman I, who was the grandson of Mahamalla. 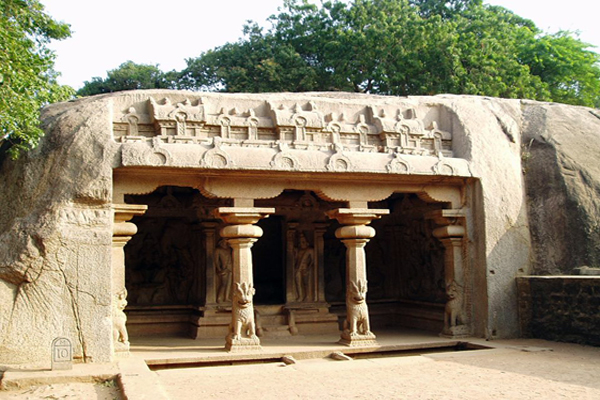 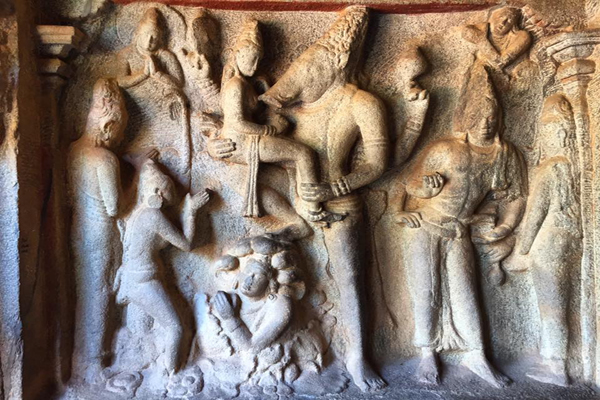 Mandapas or rock-cut Caves are sanctuaries or temples covered with bas-reliefs. The earliest period of use of caves as sanctuaries is traced to the Buddhist and Jain periods when these were excavated, the rocks cut and then carved using chisel and iron mallet. Of the eleven mandapas or caves seen in Mahabalipuram, the most notable are the Varaha Cave Temple, Krishna Cave Temple, Panchapandava Cave Temple, and the Mahishasuramardini Mandapa. These cut and decorated with panels in the Mamalla style during the Pallava period in the 7th century. Remnants seen in the caves also indicate that they were plastered and painted when built. One of the most impressive bas-reliefs, carved on the walls in the caves, is that of the goddess Durga (a form of goddess Shakti), who killed Mahishasura, the buffalo-headed demon. This bas-relief panel in the Mahsisuramardhini Cave Temple is considered a masterpiece of Indian art. Many of the caves of the Pallava period have remained incomplete. 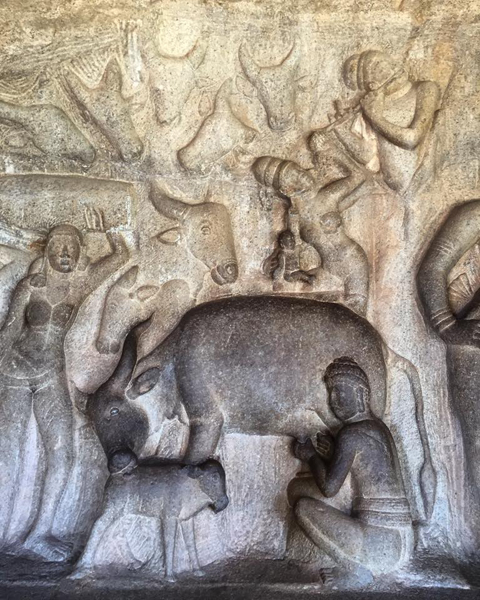 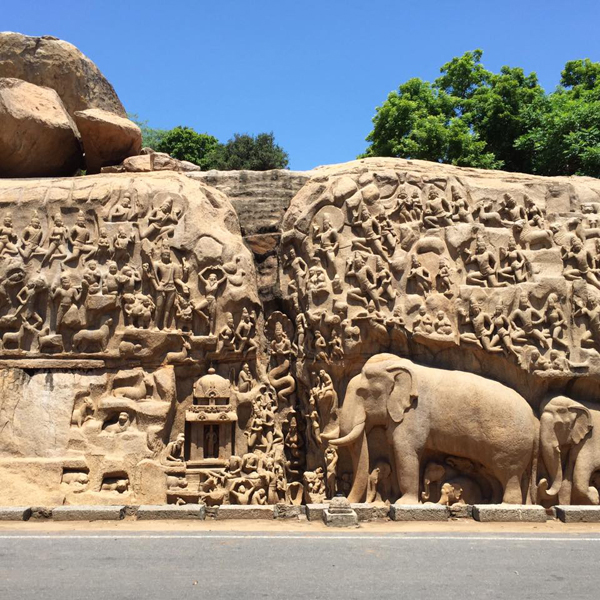 Rock reliefs are carved on rocks or on independent boulders. The most famous rock relief or bas-relief work seen in Mahablipuram is titled the Descent of the Ganges [also known as Arjuna’s Penance or Bhagiratha’s Penance], the largest open-air rock relief. It is also reported as the largest bas-relief work in the world. This bas-relief is carved on two huge boulders of 89 ft length and 30 ft height with innumerable depictions eulogizing through mythological episodes from the Hindu religious beliefs. These are of the early or middle 7th century creations on granite boulders and are considered by The Hindu to be “one of the marvels of the sculptural art of India.” 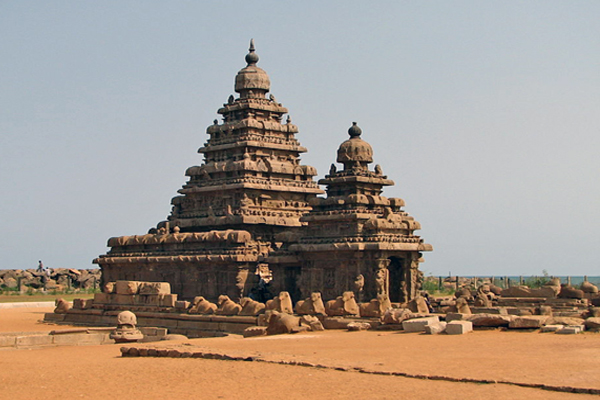 The structural temples were also built by the Pallava kings but during the early 8th century during the reign of Pallava king Rajasimha (AD 700-28). It is located right on the shores of the coast of the Indian Ocean and has sustained wave action and tsunamis. The most famous and prominent of this form of temples is the Shore Temple complex which has two small and one large temple enclosed within a two tier compound wall studded with images of Nandi, the vahana (vehicle) of Shiva. The main temple is tall (rising to a height of 60 feet and is a stepped pyramidal tower arranged in five tiers. It is decorated with thousands of sculptures dedicated to the worship of Lord Siva. There is also a small temple in the original forecourt of this temple. The other two temples in the same complex are behind this large main temple, face each other and are known as the Rajasimhesvara or Nripatisimha Pallava Vishnugriha and the Kshatriyasimhesvara. The latter temple is dedicated to Shiva while the former temple has an ancient reclining image of Anantashayana Vishnu carved in the bed of the river nearby. The temple walls on the rear side are carved with bas-relief panels depicting Siva, Parvati and their son Skanda. The mandapa in front of the Rajasimheshvara is extant up to the basement. The entire temple complex is covered by a prakara (compound wall) coped with Nandis. As the Shore Temple is located next to the sea, it is affected by the rough sea and salt laden winds. The efforts undertaken by ASI such as construction of groynes, wall paper pulp treatment and Casuarina tree plantations on the shore line are mitigation methods which have been implemented.