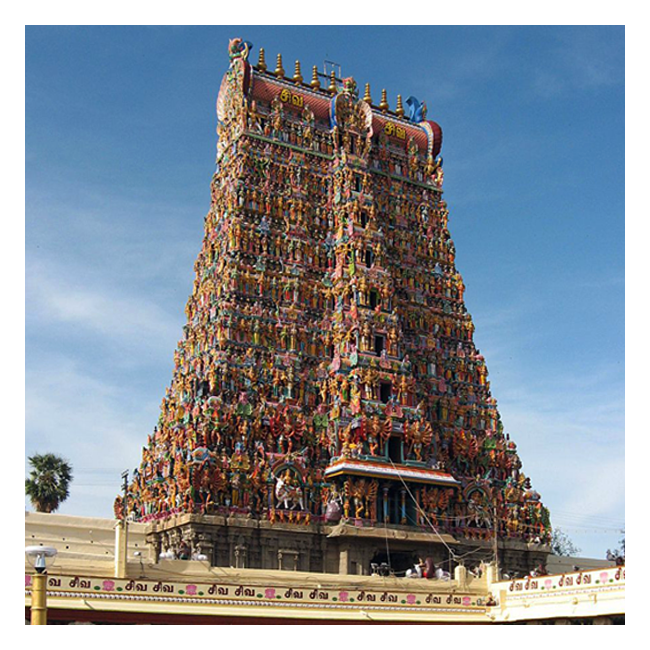 Meenakshi Amman Temple is a historic temple located on the southern bank of Vaigai River in the temple city of Madurai. It is dedicated to Parvati, known as Meenakshi, and her consort Shiva, here named Sundareswarar. The temple forms the heart and lifeline of the 2,500 year old city and is a significant symbol for the Tamil people. 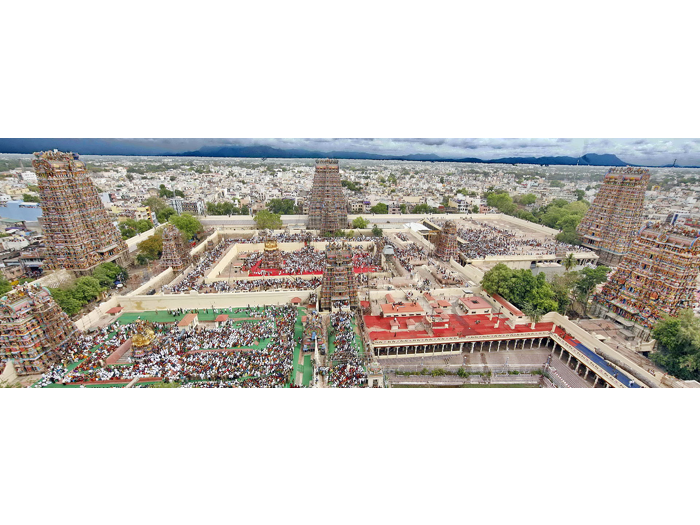 Meenakshi Amman Temple – The temple is the geographic and ritual center of the ancient city of Madurai. The streets happened to be radiating out like a lotus and its petals. It is one of the few temples in Tamil Nadu to have four entrances facing four directions. / Image by எஸ்ஸார் Via Wikimedia Creative Commons.

Meenakshi Amman Temple is situated in the heart of the city of Madurai. The temple covers an area of 17 acres. The entire city being built around it. Meenakshi Temple is one of the largest temple complexes in Tamil Nadu. The temple’s history is as old as the history of the city itself. The temple forms the heart and lifeline of the 2500-year-old city of Madurai. This ancient city is built around the Meenakshi Temple which has been the geographical and ritualistic center of the region since the times of the Pandyans. The temple is said to have been constructed by Kulashekara Pandyan.

The temple is the geographic and ritual center of the ancient city of Madurai. Ancient Tamil classics mention that the temple was the center of the city and the streets happened to be radiating out like a lotus and its petals. The temple complex is divided into a number of concentric quadrangular enclosures contained by high masonry walls.

The temple which has five entrances, covers an area 847 feet (254.1 meters) long and 792 feet (237.6 meters) wide in the North South direction, the circumference of the Adi Veedhi which is the path within the great walls is 830 feet (249 meters) on the east west and , measuring 730 feet (219 meters) from North South direction.

Though the present temple structure was built between 1623 and 1655 AD, it is said that the temple was actually built in the 6th century BC by survivors of Kumari Kadam. In the 14th century, the Mughal Muslim Commander Malik Kafur plundered the temple and looted its valuables. It was rebuilt by the Nayak ruler Vishwanatha Nayakar around the 16th century. 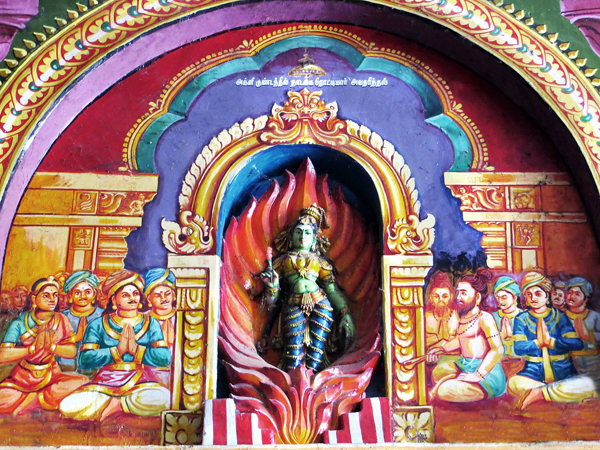 Birth of Tatatagai / Image by Rkkrajarajan via Wikimedia Creative Commons

Legend tells the tale that the second Pandyan king Malayadwaja Pandya and his wife Kanchananalaj were unable to conceive any children. In attempts to beget a child, Malaydwaja conducted many Vedic ritual. Finally, in the middle of one such ritual, an infant version of Goddess Parvati appeared. This infant was born with three breasts, but a voice from the heavens told her new parents not to worry because one of her breasts would disappear when she met her true love. The infant was named Tadaatagai and succeeded her father to the throne. She led armies on successful campaigns of conquest. In her last campaign in North India, she challenged Lord Shiva himself at Mount Kailash. The moment she looked at Shiva, she was unable to fight and bowed her head down in shyness, and her third breast vanished immediately. Tadaatagai realized that Shiva was her destined husband. She also realized that she was the incarnation of Parvati. Both Shiva and Tadaatagai returned to Madurai and the king arranged the coronation ceremony of his daughter, followed by her marriage to Shiva. According to mythology, the marriage of Meenakshi and Shiva actually took place in Madurai. It is still celebrated every year with great pomp and show. The marriage was to be the biggest event on earth, with the whole earth gathering near Madurai. Vishnu, the brother of Meenakshi, prepared to travel from his holy abode at Vaikuntam to preside over the marriage. 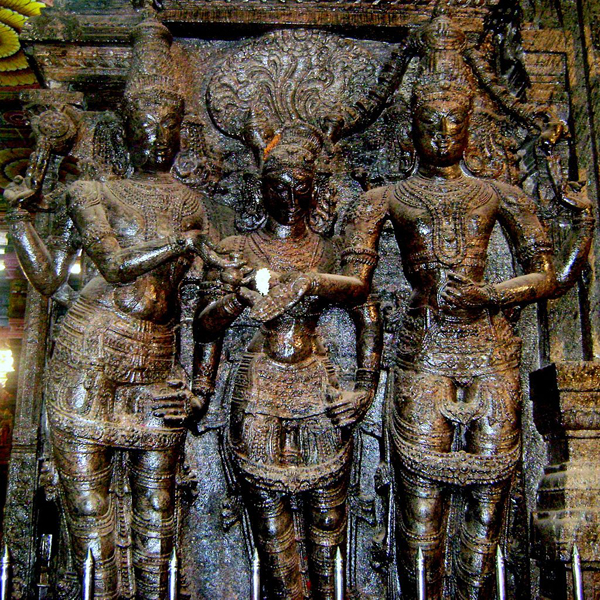 The temple is surrounded by gopurams [gateway tower]. There are 14 gopuram the tallest of which, the famous southern tower, rises to over 170 ft and was built in 1559. The oldest gopuram is the eastern one, built by Maravarman Sundara Pandyan during 1216-1238. Each gopuram is a multi-storeyed structure, covered with thousands of stone figures of animals, gods and demons painted in bright hues. The outer gopuram presents steeply pyramidal tower encrusted with plaster figures, while the inner gopuram serves as the entrance to the inner enclosure of Sundareswarar shrine. 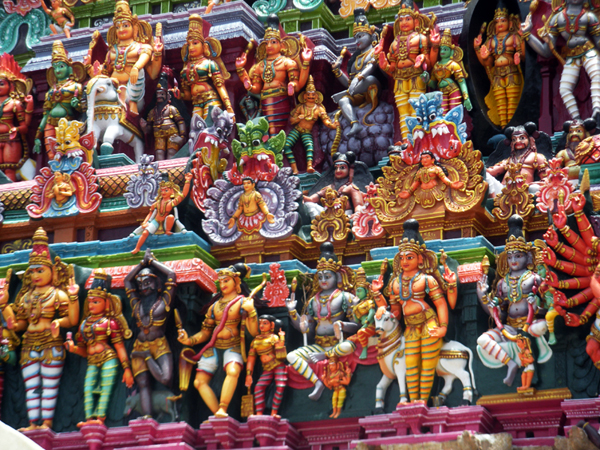 Each gopuram is a multi-storeyed structure, covered with thousands of stone figures of animals, gods and demons painted in bright hues – Meenakshi Amman Temple / Image by Nsmohan Via Wikimedia Creative Commons. 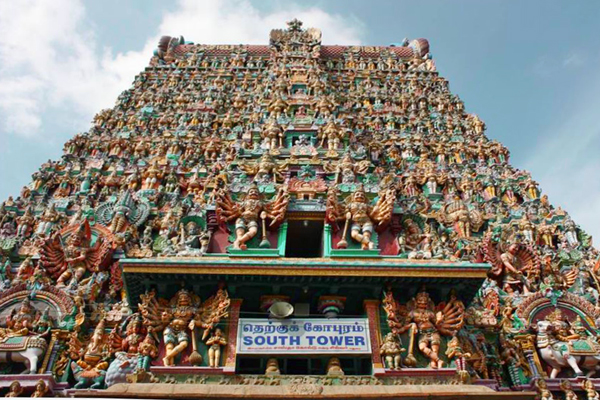 The southern tower, rises to over 170 ft, and was built in 1559 – Meenakshi Amman Temple/ Image courtesy Tanvi Sinha. 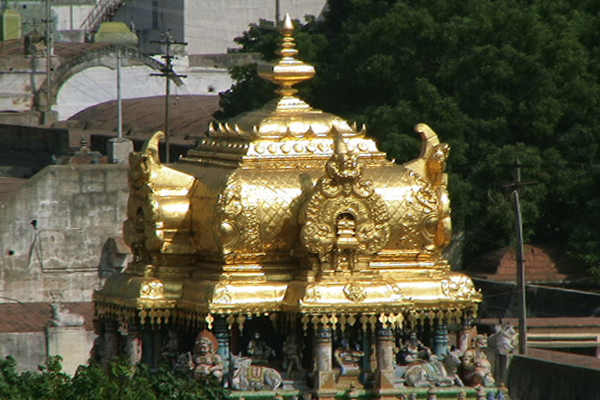 The central shrine of Meenakshi Amman temple and her consort Sundareswarar are surrounded by three enclosures, and each of these are protected by four minor towers at the four points of the compass, the outer tower growing larger and reaching higher to the corresponding inner one. The Meenakshi shrine has the emerald-hued black stone image of Meenakshi. The Sundareswarar shrine lies at the centre of the complex, suggesting that the ritual dominance of the goddess developed later. Both the Meenakshi and Sundareswarar shrines have gold plated Vimanam [tower over sanctum]. The golden top can be seen from a great distance in the west through the apertures of two successive towers. The area covered by the shrine of Sundareswarar is exactly one fourth of the area of the temple and that of Meenakshi is one fourth that of Sundareswarar. 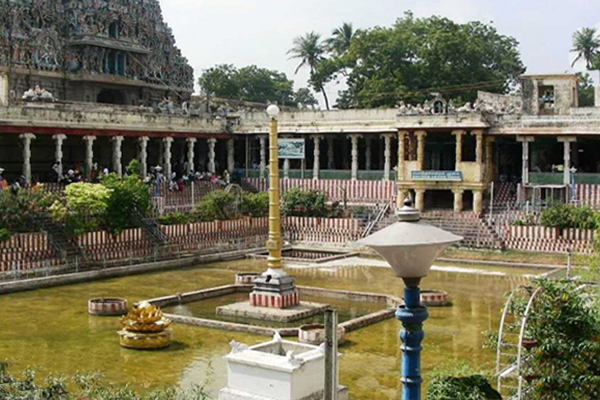 Potramarai Kulam  [Golden Lotus Tank] : This pond is situated within the temple complex.  It was in this pond that the Golden Lotus for Indra to perform his pooja bloomed. This pond is also known as Adhi Theertham, Sivaganga and Uthama Theertham.

The tank is encircled by a pillared corridor. There are steps that lead down to the tank, enabling worshippers to take bathe in it. If a devote bathe in the waters of this pond of Golden Lotus on Amavasya (new moon) day, the first day of the month, days of eclipse and other auspicious days and worship the Lord, they will be blessed with all their aspirations for success. 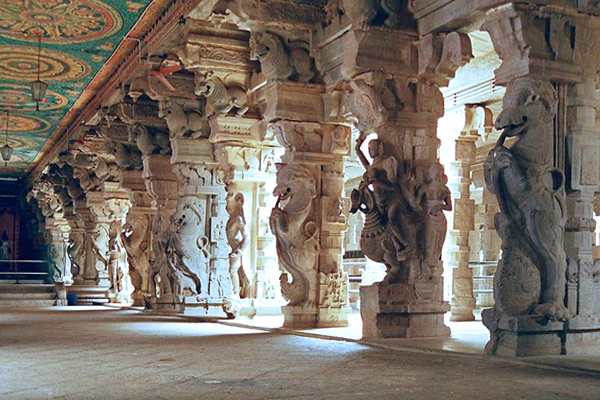 Killikoontu [Parrot Cage] Mandapam: The corridor surrounding the sanctum the Meenakshi is called kilikoondu Mandapam [bird cage corridor]. The space was once used to keep green parrots that were trained to utter the name of Meenakshi. There are two large cages full of squawking green parrots.

Kambatadi Mandapam [Hall of Temple Tree]: It has seated Nandi (sacred bull) and various manifestations of Shiva carved on the pillars. It also contains the famous “Marriage of Meenakshi” sculpture. Sculptures of Shiva and Kali trying to out-dance one another are pelted with balls of ghee by devotees. A golden flagstaff with 32 sections symbolizes the human backbone and is surrounded by various gods, including Durga and Siddar.

Puthu Mandapam [New Hall] constructed by Tirumala Nayak contains large number of sculptures. It is situated opposite to the east gopuram.

Asta Shakti Mandapam [Hall of Eight Goddess]: This is the first hall in the entrance of Meenakshi shrine tower near to East Tower. Ashta indicates eight, and Shakthi refers to goddess. The hall has statues of the eight forms of Goddess Sakthi, [the consort of Lord Shiva] – Kaumari, Rowthiri, Vaishnavi, Mahalakshmi, Yangnarubini, Shyamala, Maheswari and Manonmani – sculptured into the pillars of the mandapam individually. There are drawings depicting the life of Meenakshi Amman on the roof of the mandapam. There are statues of Vallaba Vinayagar and Murugan at the entrance of this mandapam. The gopurams (towers) can be viewed from this hall. This mandapam is said to have been constructed by the queens Uruthirapathiammal and Tholiammal [1623-1659] who were the wives of Thirumalainaicker.

Viravasantharaya Mandapam:  is a large hall with huge corridors. To the south of this hall is the Kalyana Mandapam, to the south of the pillared hall, is where the marriage of Shiva and Parvati is celebrated every year during the Chithirai Festival in mid-April.

Oonjal [swing] Mandapam: The golden idols of Meenakshi and Sundareswarar are seated on the swing in the Oonjal Madapam. Every Friday and hymns are sung as the deities swing to and fro. The shrine has a 3-storied gopuram guarded by two stern dwarapalakas [guardians] and supported by golden, rectangular columns that bear lotus markings. Along the perimeter of the chamber, granite panels of the divine couple are present. The hall is situated in the western bank of the temple tank.

The Mudali Pillai Mandapam or Iruttu Mandapam [Dark Hall] is a wide and long hall built by Muthu Pillai during 1613. On the pillars of the halls, there are fine sculptures depicting the story of Shiva taking the form of Bikshadanar to teach the sages a lesson.

Meenakshi Nayaka Mandapa: This mandapam which is seen next to the Ashta Sakthi mandapam was constructed by Meenakshi Naicker belonging to the Naicker clan in the year 1708. There are sculptures depicting Goddess Meenakshi and Lord Shiva who took the form of a hunter and huntress to rid a Brahmin of his sin. The twelve Sun signs of zodiac have been depicted in a square shape structure on top of the mandapam. This mandapam is 160 feet in length and has pillars that have been arranged in six rows. This big hall consists of 110 pillars carrying the figures of a queer animal with a lion’s body and an elephant’s head called Yalli. a spacious columned hall used for shops and stores. This hall has a dedicated lamp-holder with 1,008 lamps, which are lit and decorated on festive occasions. The sculptures on the pillars tell us about some of the miracles of Lord Shiva and also the story of Meenakshi’s birth and her life as the princess of Madurai.

Nagara Mandapam [Hall of beating drums]: lies opposite to Sundareswarar shrine was built by Achaya Rayar, the minister of Rani Mangammal in 1635.

Kolu Mandapam: is a hall for displaying dolls during the Navarathri festival celebrated during September–October. This hall is situated in the second corridor of the Meenakshi shrine at the western side.

Mandapam of 63 saints: This Mandapam built in 1569 by one Ariyanatha Mudaliyar is situated in the front corridor of the Swami sannidhi in the south row. This mandapam houses the sacred icon of Shekkizhar Swamigal and 63 Nayanmars. 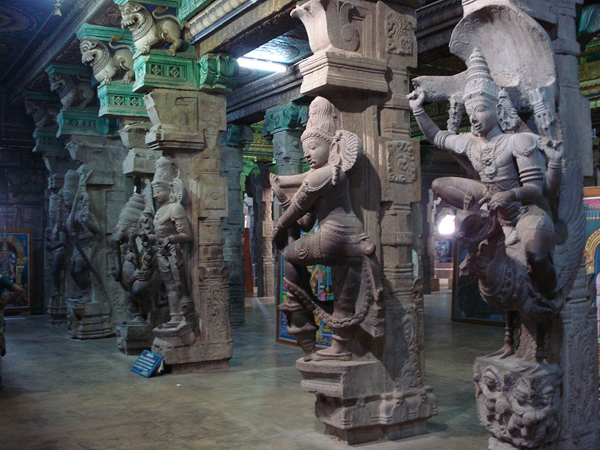 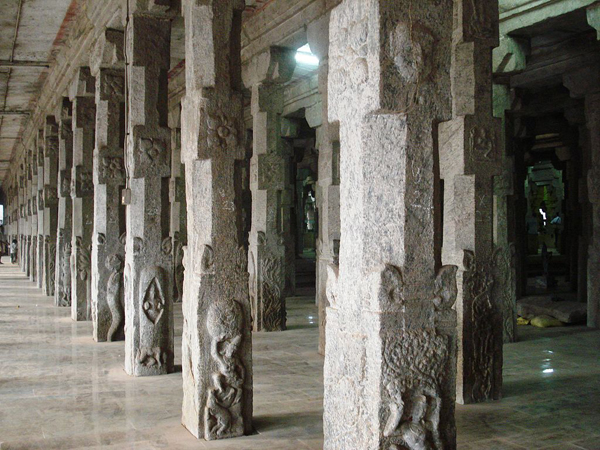 The Thousand Pillar Mandapam: regared as the ‘wonder of the palace’. There are around 985 beautifully decorated columns. Each pillar is beautifully sculptured and presents the glory of the Dravidan sculpture. This hall also houses a Temple Art Museum, where you can see icons, photographs, drawings, etc., exhibiting the 1200 years old history.