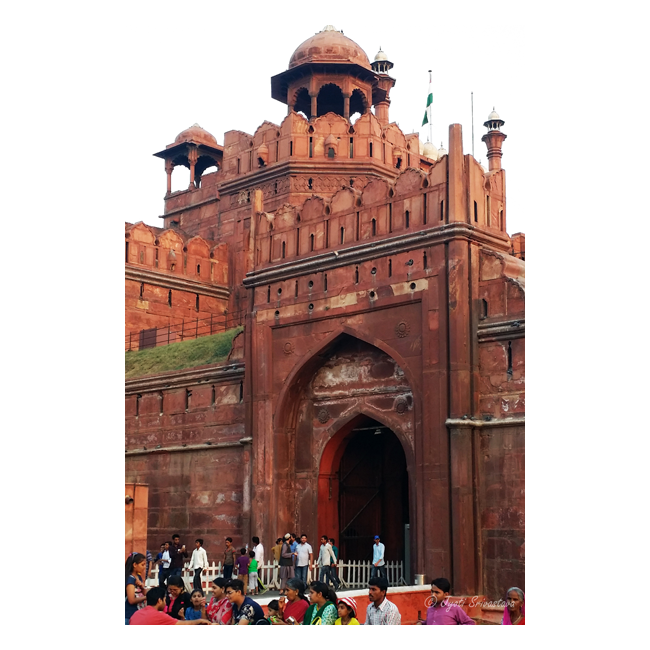 The site was inscribed on the World Heritage List in 2007.

Architect: Ustad Ahmad Lahauri
He was also the chief architect of Taj Mahal.

The Red Fort Complex was was designated a UNESCO World Heritage Site in 2007. 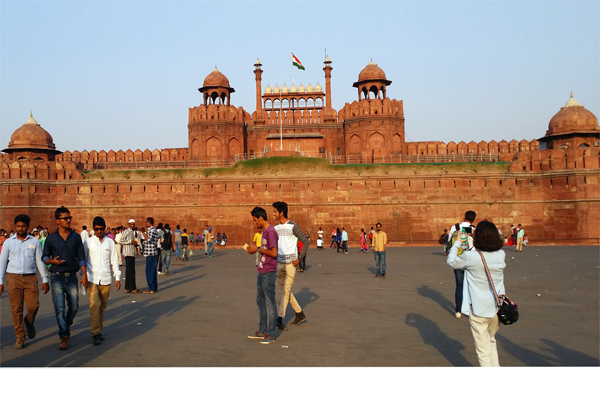 Shah Jehan [1628-58] the Fifth Mughal Emperor shifted the capital from Agra to delhi in 1638 AD, and established Shahjehanabad, the seventh city of Delhi. He commenced the construction of his citadel “Lal Qila” or the Red Fort on May 12th 1639. It took 9 years and 3 months to complete it. The building was built under the supervision of master builder Hamid and Ahmed. Originally it was known as “Qila-i-Mubarak”.

The Fort is built using red sandstone and is octagonal in plan with the rampart surrounded by moat. It was originally connected to River Yamuna. The highly fortified citadel has two main gates:
– The Lahori Gate on the west, and,
– The Delhi Gate or “Hathi Gate” in the south. 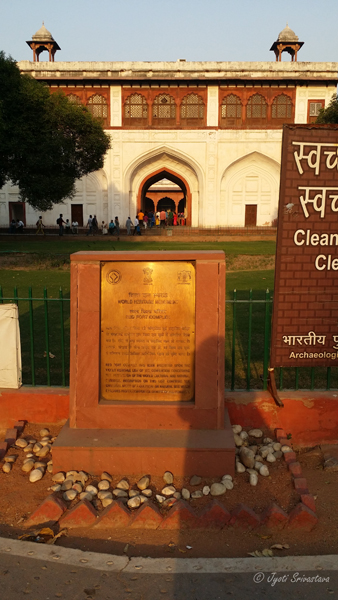 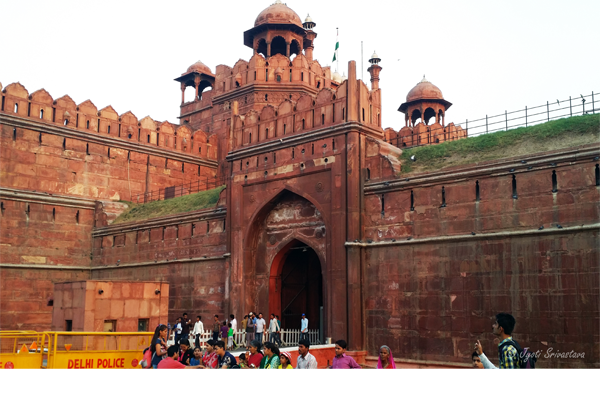 The fort is entered through the Lahore Gate, which faces towards the Chandini Chowk, the city’s most crowded and diverse market. On Independence Day [August 15th], the Prime Minister of India hoists the ‘tricolor’ national flag at the main gate of the fort and delivers a nationally-broadcast speech from its ramparts. 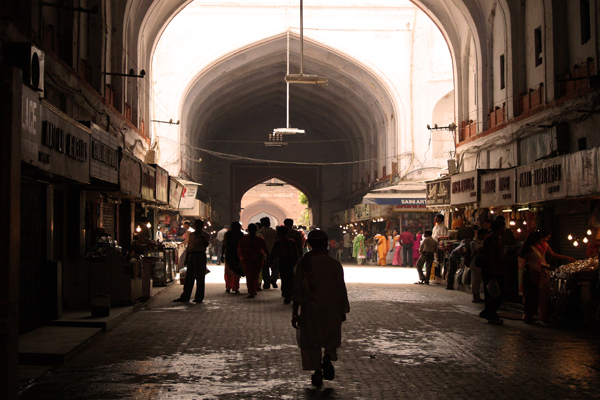 Walking through the Lahore gate one immediately this covered two-story market place Chhatta Chowk. Chhatta Chowk means covered baazer [market], which in the 17th century India was extremely unusual and this one especially is unique in Mughal architecture. The bazaar was earlier known as Bazaar-i-Musaqqaf. Saqaf means roof. Chhatta Chowk is 268 feet long x 27 feet wide. On both sides there are shops. It is said that the design was chosen by Shah Jehan himself. In Shah Jehan time, there were shops on both the upper and lower levels. They catered to the luxury items of imperial household as they specialized in silk, brocade, velvet, gold and silverware, jewelry and gems. 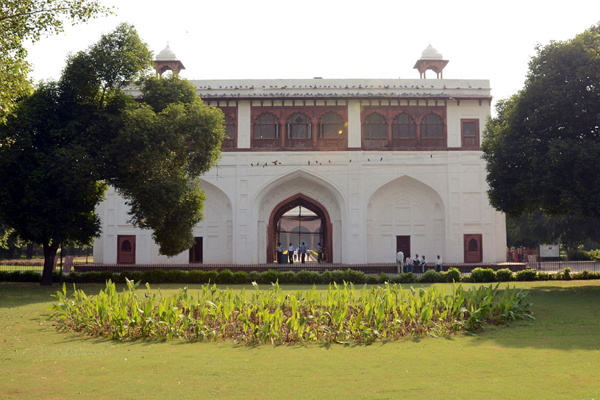 Naubat Khana stands at the entrance of the palatial complex.  It used to be musician’s gallery.  In its days of glory, musicians from Naubat Khana announced the arrival of the Emperor or other prominent dignitaries. Music was played five times a day  at chosen times. Most of the royal palaces of India have essentially Naubat Khana at the entrance.

Faced with red sandstone this large three-storied building is rectangular in plan and richly carved floral designs on red stone walls. These were originally painted in gold, while the interior was painted in other colors. Several layers of these paintings can be traced even now in the entrance chamber. 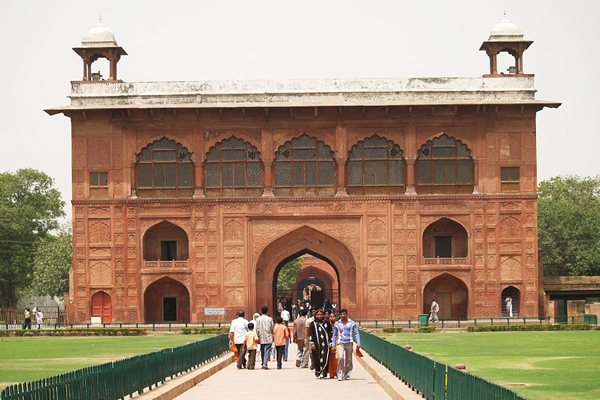 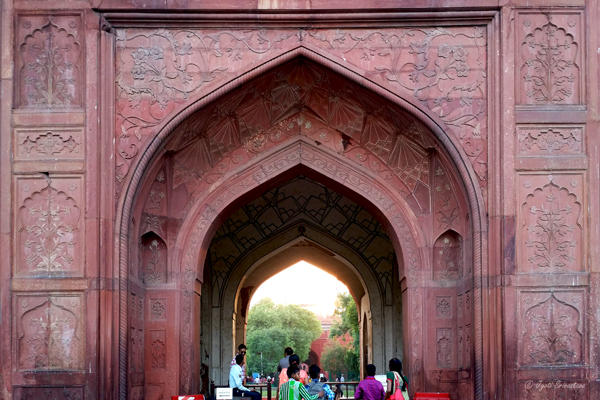 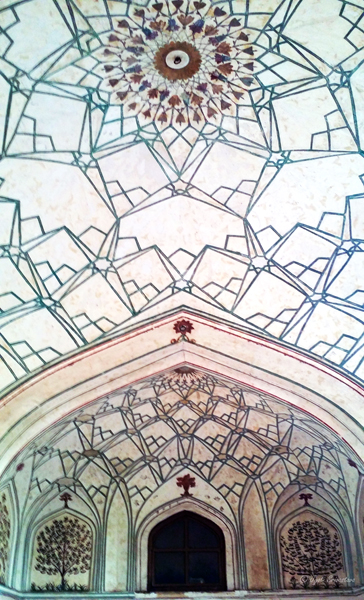 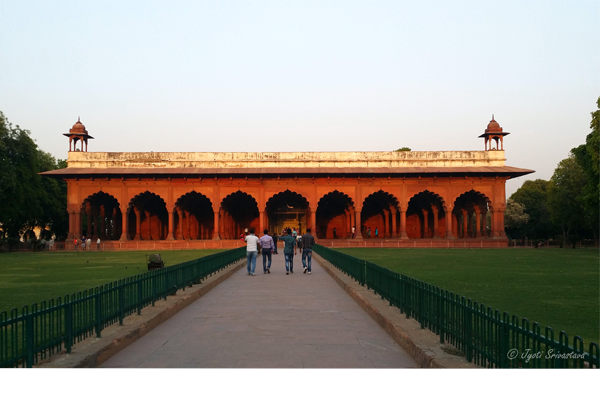 This magnificient hall was the Mughal Emperor’s Hall of Public Audience. It contained delicate inlaid and carved marble jharoka or the Imperial Throne. It was here that the celebration of Red Fort took place.

The hall was originally covered over with a coat of burnished white shell lime plaster. Its ceiling and columns painted with gold. The Emperor in his throne was seperated from the courtiers in the hall by a gold plated railing and a silver railing was erected on the three sides of the hall.

The Diwan-i-Am consists of a front hall, open on three sides, backed by a set of rooms faced in red sandstones. the hall is divided into 27 square bays on a system of columns that support the arches. The roof is spanned by beams of sandstone. 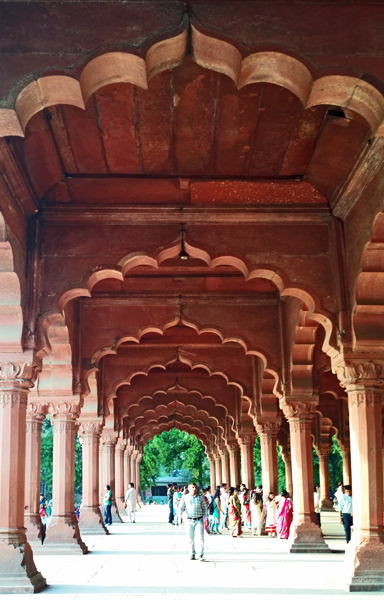 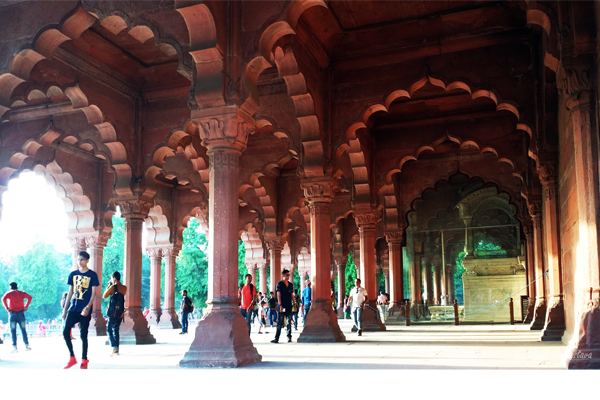 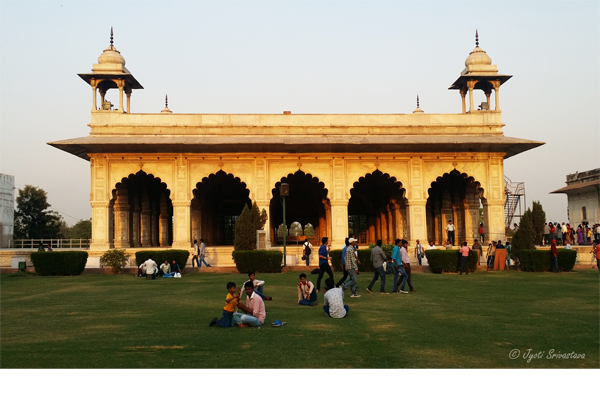 Diwan-i-Khas, also known as Shah Mahal was the Hall of Private Audience used by the Emperor for receiving selected courtiers and visitors.
It consists of a rectangular central chamber surrounded by series of arches rising from piers. It measures 90 x 67 feet. The lower parts of the piers are inlaid with floral designs, while the upper portions are painted and gilded. The four corners of the roof are surmounted by pillared chhatris. The ceiling, which was originally inlaid with silver and gold. The current ceiling was installed in 1911.

Over the marble pedestal, in its center stood the famous “Peacock Throne”, which was removed in 1739 by Nadir Shah. Through the centre of the hall flowed the Stream of Paradise (Nahar-i-Bihisht). The building used to have red awnings, or shamianas. Over the corner-arches of the northern and southern walls below the cornice is inscribed the famous verse of Amir Khusrow: “If there be a paradise on earth, it is this, it is this, it is this.” 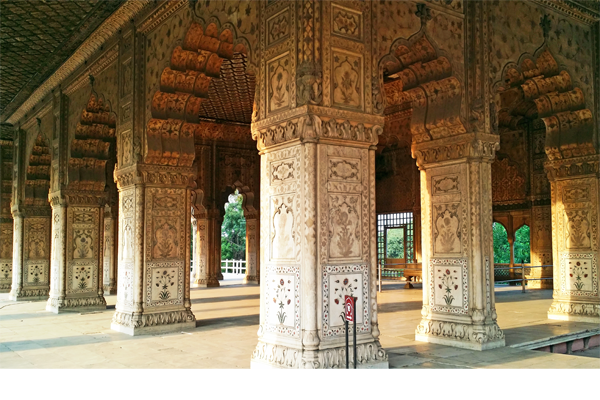 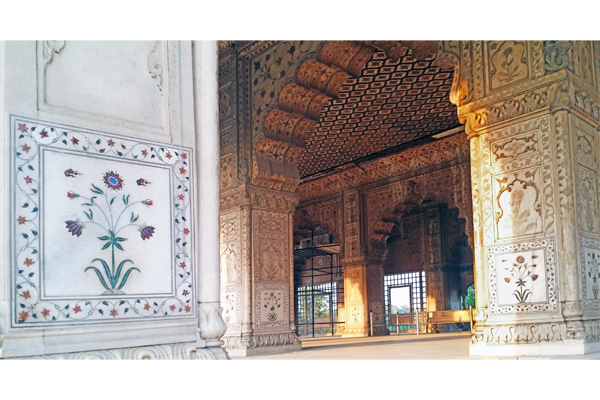 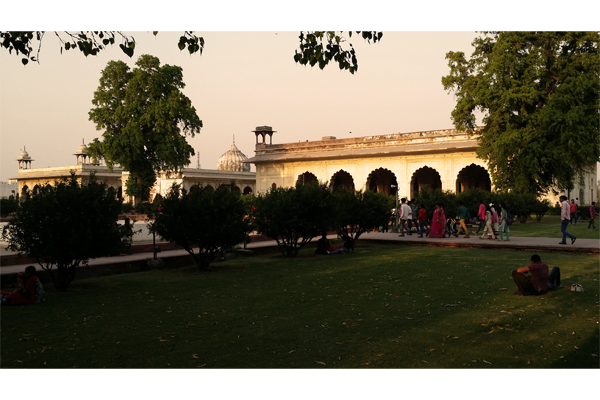 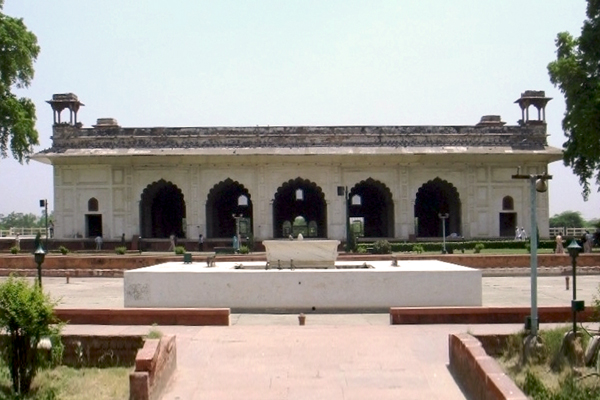 The Rang-Mahal, resting on a basement, consists of a large hall, originally painted on the interior, from which it derives its name, meaning the ‘palace of colour’. Divided into six compartments by engrailed arches set on piers, the two apartments on its northern and southern ends contain marble dados. Over the walls and ceilings of these apartments are embedded tiny pieces of mirror, which reflect a burning match or other light and create thus a picturesque effect. These apartments are known as Shish-Mahal [‘house of mirrors’]. Through its center along its length flowed the channel known as Nahr-i-Bihisht. In its center is a marble basin, which is said to have been provided originally with an ivory fountain. 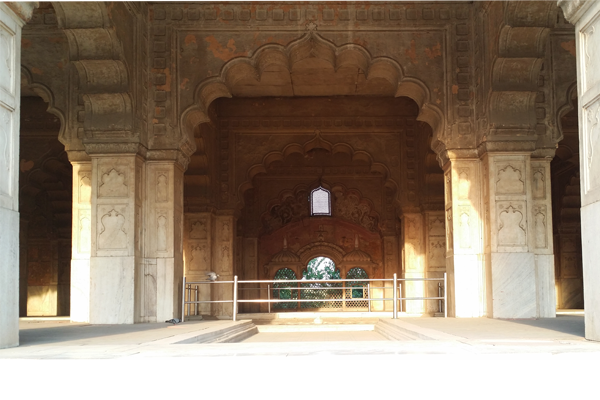 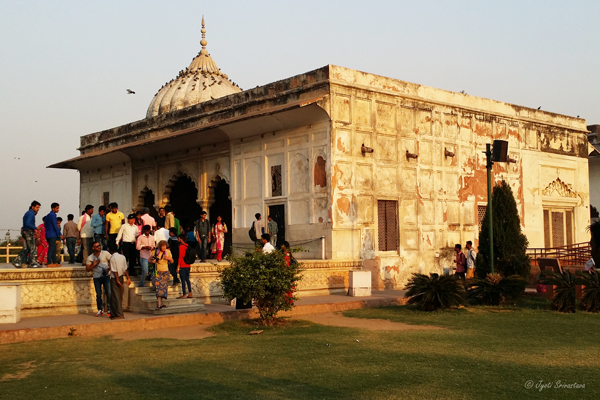 It consists of three parts: the Chamber of Telling Beads [Viz-tasbih-khana], the sleeping chamber [khwabga]) and the wardrobe [tosha-khana] or sitting room [baithak]. The interior is decorated with carved white marble painted with colourful floral decorations. The ceiling was also partially gilded. The marble screen was carved with the scale of justice [Mizan-i-adal], and above it is a particularly important item of Mughal art. The scale used was a depiction of the emperor’s justice.[2]

The projecting tower to the east of the Khas Mahal is called the Octagonal Tower [Muthamman Burj]. The emperor would address his subjects every morning in a ceremony called Jharokha Darshan. 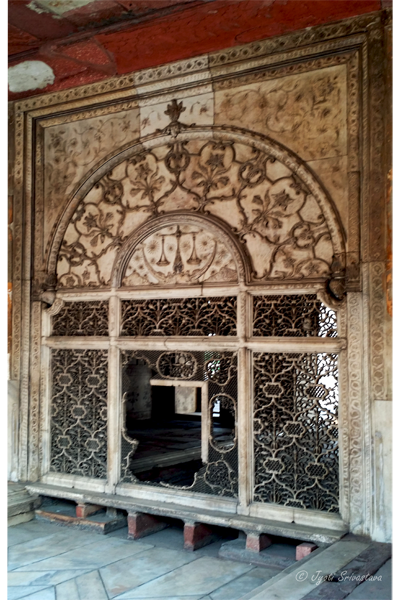