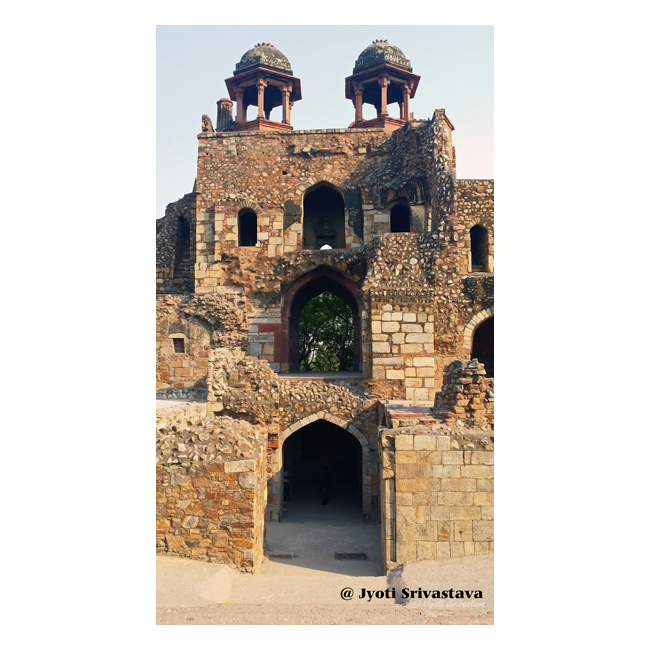 Purana Qila [Old Fort / Purana means Old, and Kila means Fort]..
Purana Qila is one of the oldest forts in Delhi. Old Fort is 5000 years old and was basically the boundary wall of the city of Delhi then. The city was built by the Mughal emperor Humayun. He decided to build a city that was called Dipanah that means the refuge of faith. Its current form was built by the Afghan king Sher Shah Suri, who made this citadel of Purana-Qila with an extensive city-area sprawling around it. It seems that the Purana-Qala was still incomplete at Sher Shah’s death in 1545, and was perhaps completed by his son Islam Shah. 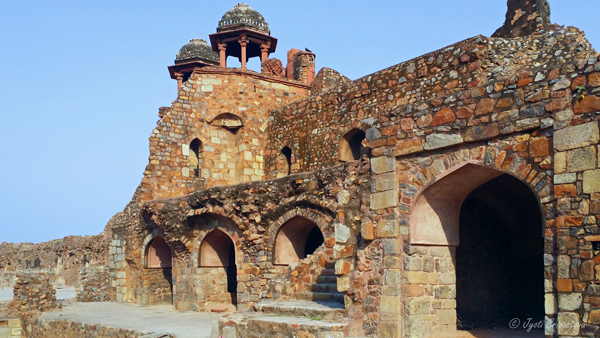 HISTORY of PURANA QILA:
The Purana Qila [or Old Fort] is located on the site which has a long history of habitation. There are monuments in Delhi older than Purana Kila. But arguable no other place in the city has a history that runs as deeper than that of Purana Kila.
Excavations have revealed definite cultural layers continuously from the 4th / 3rd centuries BC to the Mughal Period, and the pottery fragments that could date from approx 1000 to 500 BC.

Archaeological Excavations at the site have found remains of at least 8 dynasties – the Mauryan, Gupta, later Gupta, Sultanate, Rajput, Kushan, Mughal as well as, the Indraprastha era. The excavated artifacts include 12th century sculpture of Vishnu, terracotta seals from the Gupta period, pottery from the Kushan and Gupta periods, structures from the Rajput and Kushan periods, copper coins, terracotta human figurines, charred wheat and rice grains and many more remains from the Mauryan period.

Purana Kila’s Mahabharata connections: The Purana Kila stands on a mound, which is believed to be the site of the town of Indrapasta, which according to the epic Mahabharata, was the capital city founded by the Pandavas on the bank of River Yamuna. It is popularly known as Pandavon-ka-kila.

In 1533, the second Mughal emperor Humayun [1530-40 and 155-56] decided to built a city that was called Dinpanah [the refuge of the faith] and he selected this site for the citadel of the city. It is believed that the walls and gates of the fort were completed within a year, and many of its buildings were added in the next few years.

Humayun’s reign was interrupted in 1540 when Sher Shah Suri , the Afghan cheiftan from eastern India ousted Humanyun from the throne and captured Delhi. More buildings were added to the fort by Sher Shah and his successors.

In 1955, Humanyun regained the throne but dies within a few months.

Is Purana Qila an Unlucky Fort?
Folklore has it that Purana Kila and associated bad luck.
The Fort was supposed to be unlucky for rulers who occupied the site; Humayun, Sher Shah Suri, and Hemu all had but relatively brief tenures ensconced there. Humayun on two separate occasions, having lost the fort to Sher Shah only five years after erecting it, and dying within a year of recapturing it 15 years later. After the death of Humayun, the Mughals considered the fort to be cursed and vacated the structure. Akbar did not rule from here and Shah Jahan built a new fort in Delhi known as Lal Qila [“Red Fort”].
Then there is also the story of Hindu king Hemu [Hem Chandra Vikramaditya] torso being hung outside the Purana Qila.

Who was Hemu? Hemu was Chief of the Army and Prime Minister to Adil Shah Suri of the Suri Dynasty. When he heard of the recapture of Delhi by Humayun, he marched to Delhi from Bengal. In the Battle of Delhi [October 1556], he defeated the forces of Akhbar. He had his Rajyabhishek or Coronation at Purana Qila on 7 October 1556, declared ‘Hindu Raj’ in North India, and was bestowed the title of Vikramaditya. But subsequently in the Second Battle of Panipat [Nov 1556], between the forces of Hemu and the army of Akbar; Hemu was defeated. His torso was hung outside the Purana Qila Fort to create terror among Hindus. 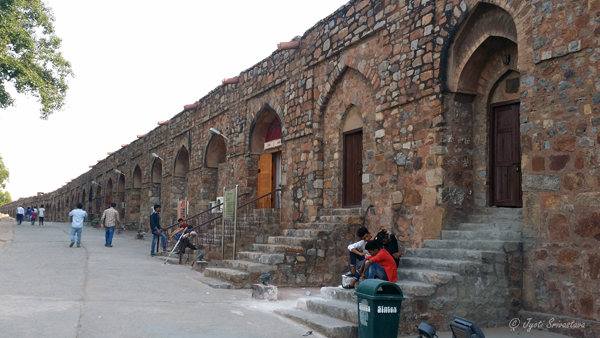 Archaeological Museum at Purana Qila: Collection of arts and artifacts excavated from this site. It all started with the excavations that were carried out at Purana Qila – once in 1954-55 & then again in 1969-73 by the Archaeological Survey of India [ASI].The findings & artifacts, which include pieces of art & crafts dating back to the Mauryan, Gupta, Mughal & other medieval periods, are evidence supporting the earliest settlements in the city & date back to 1000 BC. 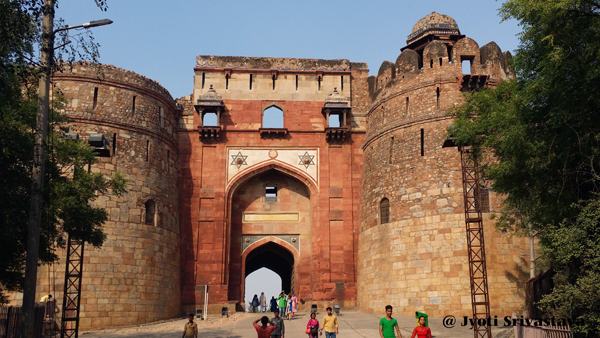 The Old Fort has three gates, West, North and South. The West is the main entrance called Bara Darwaza. It is a triple storey structure and the gate is 20 meters high. The walls have some holes for arrows and guns. There are two double storied arched gate ways called Humayun Darwaza [south gate] and Talaqi Darwaza [north gate]. The forth Darwaza had a moat linked to the river Yamuna, made perhaps to escape in the event of an attack. 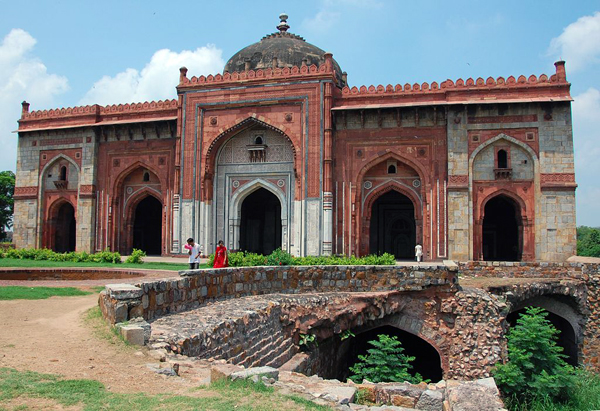 Qila-e-Kuhna Masjid / Mosque of Old Fort:   Qila-e-Kuhna Masjid was a prayer place for Mughals. The Masjid was built by Sher Shah in 1541. The hall width is 51 meters and the length is 15 meters and the center of the façade is 16.5 cm in height. The Masjid has 5 door ways with horse shoe arches. Red, yellow sand stone with white and black marble has been used to build and decorate the Masjid. The apparent idea was to construct the mosque with white marble but due to shortage of material other material had to be used. 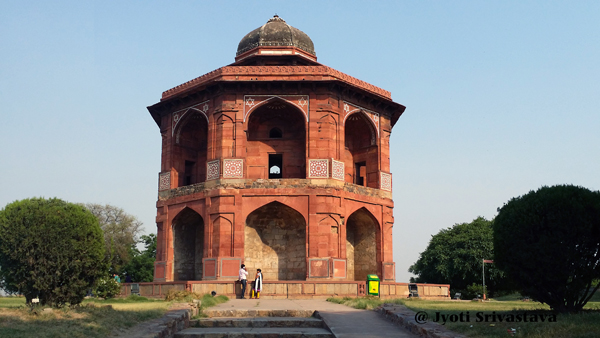 Sher Mandal is a double-storeyed octagonal red stone towerbuilt by Sher Shah as a pleasure resort. It is said that Humayun used this as his library. On Jan 20, 1556, he was on the roof of this building, when he heard the call for prayer. In hurry to descend, he fell down the stairs and was severely injured, and died three days later. Rumors exist that after the death of Humayun, the Mughals considered the fort to be cursed and vacated the structure. The Mughals then constructed a new fort known as Lal Quila [Red Fort]. 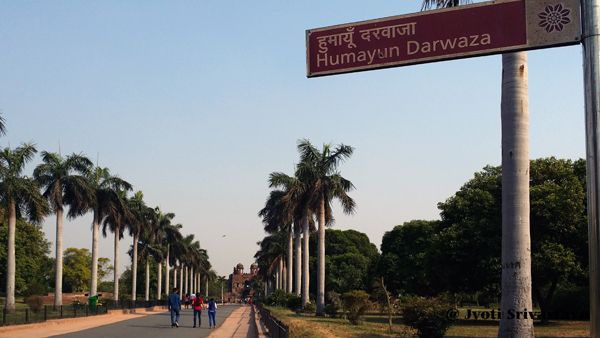 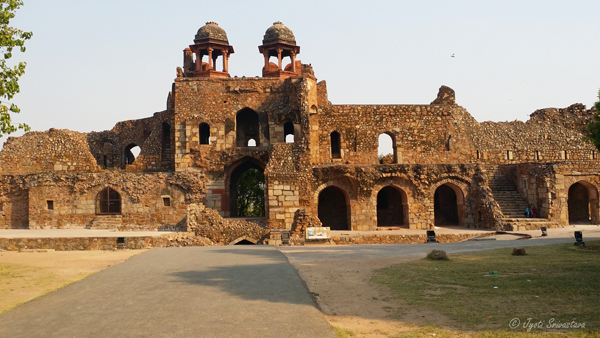 Humayun Darwaza: Although called Humanyun Darwaza, the gate is attributed partly to Sher Shah, on the basis of fading inscription in ink that was found in one of the room on the upper story. There are two entrances – one on top of the other. Lower one opened at the level of the water in the moat. Upper gate was approached by a drawbridge or causeway across the moat. 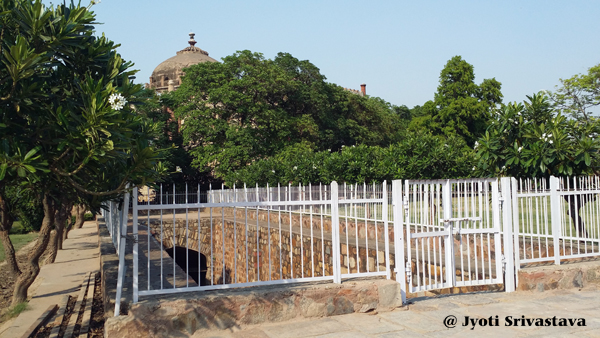 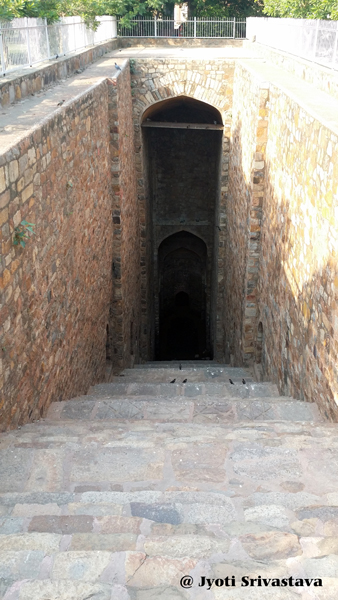 Baoli [Stepped Well] was a source of water for the inhabitants of the fort. Given the height on which the fort was built, the ground water would have been quite far down, therefore necessitating the construction of this deep well. The structure was designed to keep the water covered, so as to keep it clean and minimizing evaporation. A narror flight of 89 steps, separated by 8 landings and going down to a depth of 22 mts, gave access to water. 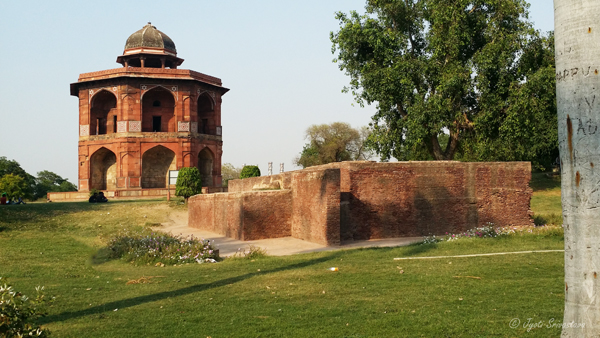 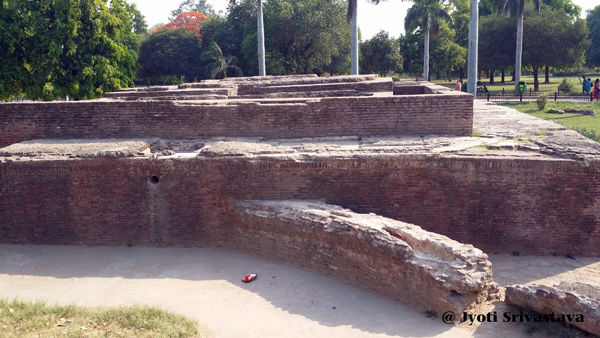 Hammam [Bath House]: The ruined brick structure is all that is left of the hammam [bath house]. The remains of terra cotta pipes and ribbed wall chute can be seen around a room measuring 3.2 mts square. Such bath houses , with provisions of hot and cold water and even steam rooms were important part of Mughal culture. In the years after the abandonment of the fort as a capital of the emire, this bath house was forgotten. It was revealed during the clearance of the village of Indrapat and conservation of the fort which was undertaken by the Archaeological Survey of India [ASI] in 1913-14. 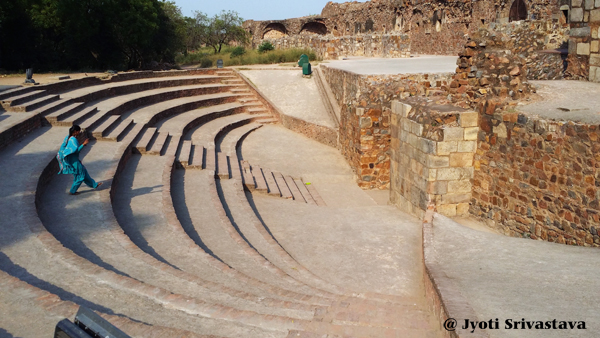 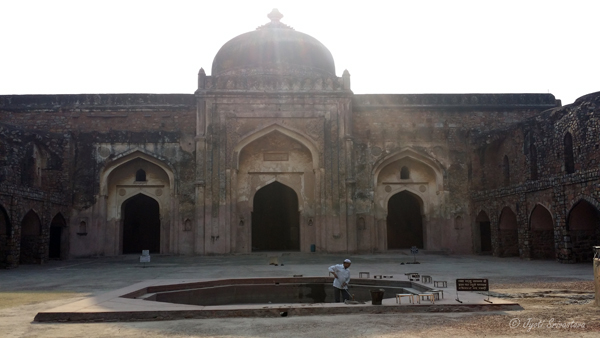 Khairul Manzil, a mosque and later a madarsa built by Maham Anga / stands opposite Purana Qila

Kairul Manzil, mosque built by Maham Anga, Akbar’s foster-mother, and which was later used as a madarsa. 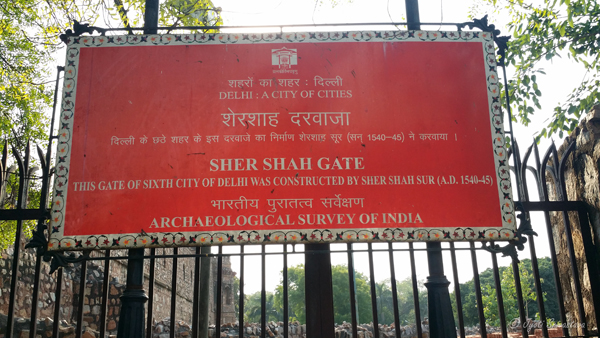 Sher Shah Suri Gate or Lal Darwaza. It was the South Gate to Shergarh, the city he founded, also lies opposite the Purana Qila complex, across Mathura Road, south-east of the Kairul Manzil.

Used bus, cab and Delhi Metro to navigate! Feels like a pro tourist. I was warned it’s too hot, it’s too crowded. I was like, I don’t care! I have 4 days and I am going to see everything I want to. Yey! I managed!

My Delhi trip was birthday gift from mom-dad! Made best use of it! Stayed with my cousin. Lots of people to thank for the trip!