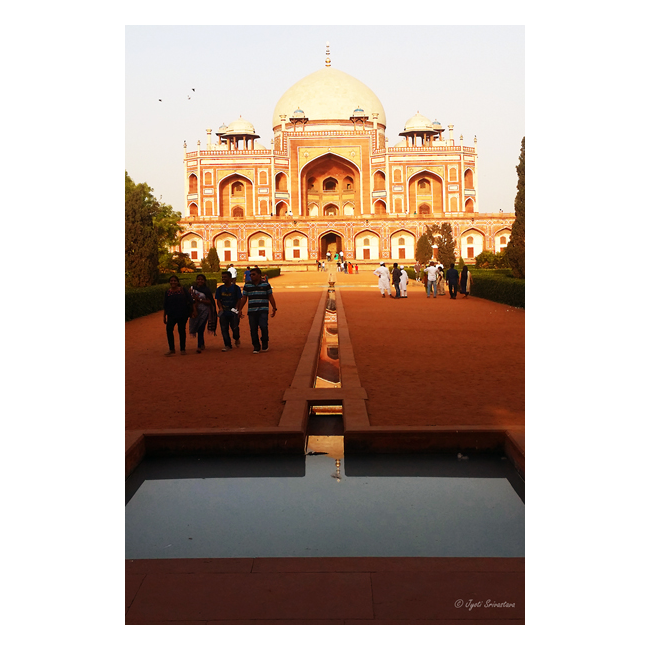 The site was inscribed on the World Heritage List in 1993.

It was built by his grieving widow Hamida Banu Begum,
with the patronage of Humayun’s son, the great Emperor Akbar.

It located in Nizamuddin East, Delhi, India;
close to the Dina-panah citadel also known as Purana Qila [Old Fort] that Humayun founded in 1533. 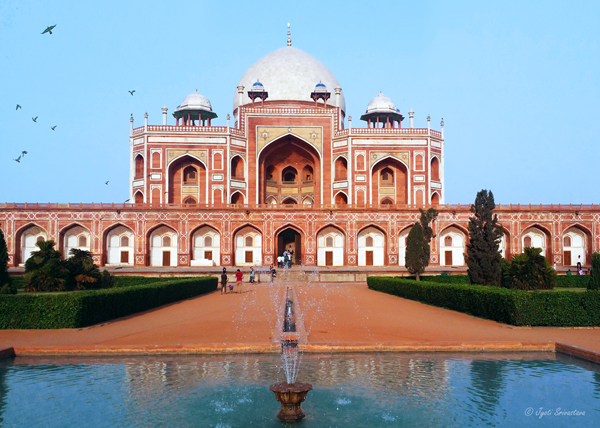 First Garden-Tomb/ Charbarg:  Humanyun’s tomb is of particular cultural significance as it was the first garden-tomb on the Indian subcontinent. Persian and Indian craftsmen worked together to build the garden-tomb, far grander than any tomb built before in the Islamic world. Humayun’s garden-tomb is an example of the charbagh (a four quadrant garden with the four rivers of Quranic paradise represented), with pools joined by channels. The garden is entered from lofty gateways on the south and from the west with pavilions located in the center of the eastern and northern walls.

First grand dynastic mausoleum/  Dormitory of the Mughals:   Humayun’s Tomb is the first of the grand dynastic mausoleums that were to become synonyms of Mughal architecture with the architectural style reaching its zenith 80 years later at the later Taj Mahal. Besides the main tomb enclosure of Humayun, several smaller monuments dot the pathway leading up to it, from the main entrance in the West, including one that even pre-dates the main tomb itself, by twenty years; it is the tomb complex of Isa Khan Niyazi, an Afghan noble in Sher Shah Suri’s court of the Suri dynasty, who fought against the Mughals, constructed in 1547 CE. Humayun’s garden-tomb is also called the ‘dormitory of the Mughals’ as in the cells are buried over 150 Mughal family members.

It was also the first structure to use red sandstone at such a scale.

The tomb stands in an extremely significant archaeological setting, centered at the Shrine of the 14th century Sufi Saint, Hazrat Nizamuddin Auliya, who was much revered by the rulers of Delhi, and whose residence, Chilla Nizamuddin Auliya lies just north-east of the tomb. Since it is considered auspicious to be buried near a saint’s grave, seven centuries of tomb building has led to the area becoming the densest ensemble of medieval Islamic buildings in India. 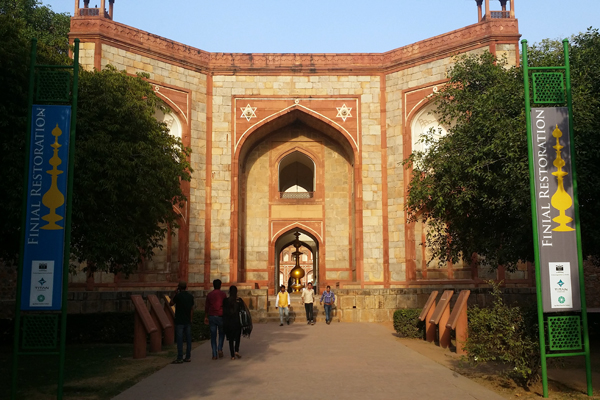 A lofty gateway on the south takes to the formal garden [Charbagh]. In the center of the garden is the mausoleum. 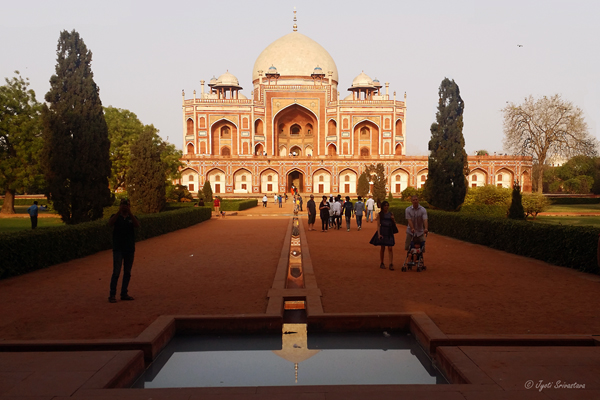 The mausoleum stands on a raised platform. A steep flight of steps takes to the platform. The building essentially square in design, though chamferred on the edges to appear octagonal.  It is surmounted by a 42.5 m high double dome. The double or ‘double-layered’ dome, has its outer layer which supports the white marble exterior, while the inner part gives shape to the cavernous interior volume. The exterior dome has pure white cladding, while in contrast, the rest of the building is made up of red sandstone. The dome is flanked by pillared kiosks [chhatris].  The domes and the chhatris are adorned with glazed ceramic tiles. The mausoleum has imposing Iwans on all the sides. Six-sided stars that adorn the main gateway, are also seen on the iwan of the main tomb structure. The entrance to the interior of the mausolum is through two lofty double-storeyed gateways on the side of the iwan.

The interior is a large octagonal chamber with vaulted roof compartments interconnected by galleries or corridors. This octagonal plan is repeated on the second-story. The structure is of dressed stone clad in red sandstone with white and black inlaid marble borders. 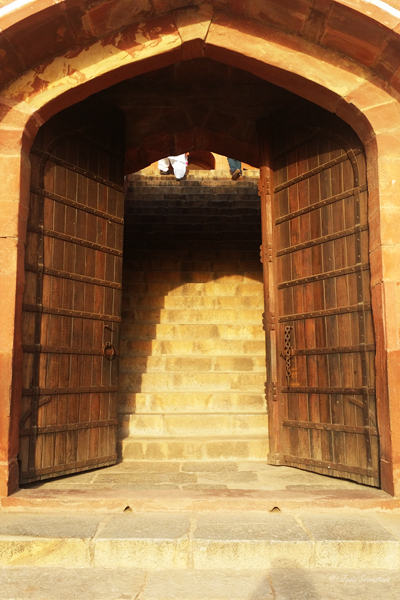 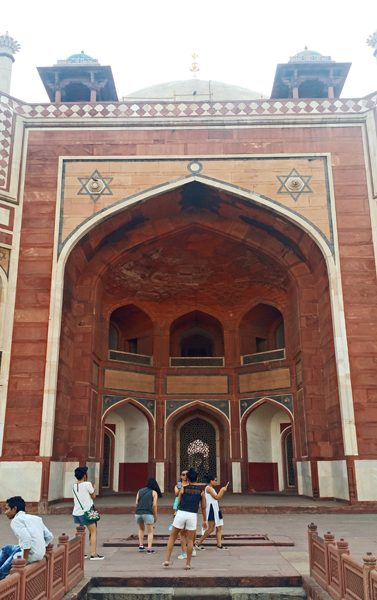 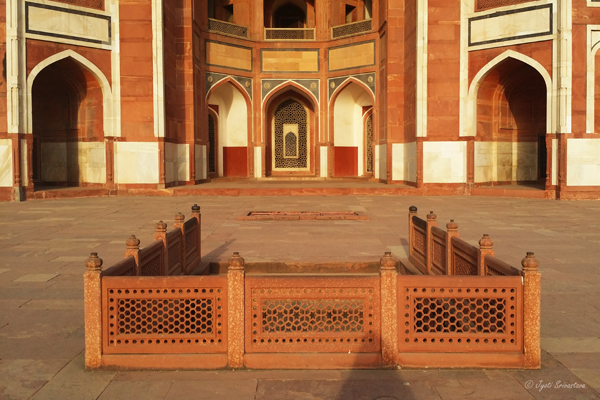 Humayun’s Tomb – the steps lead to this wide platform. 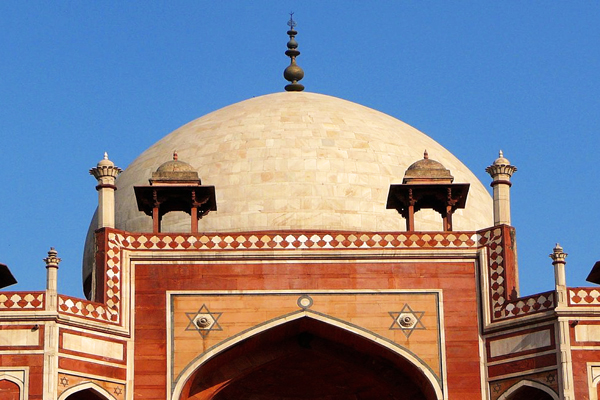 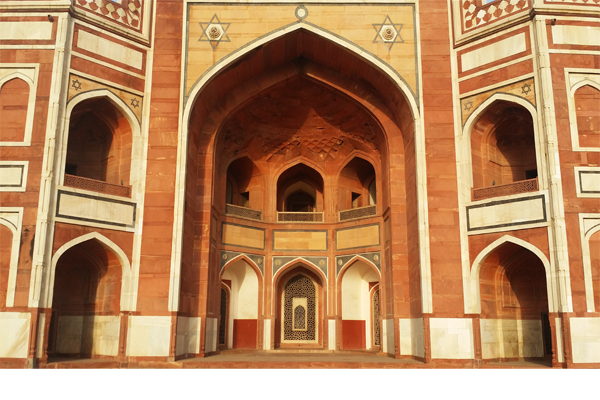 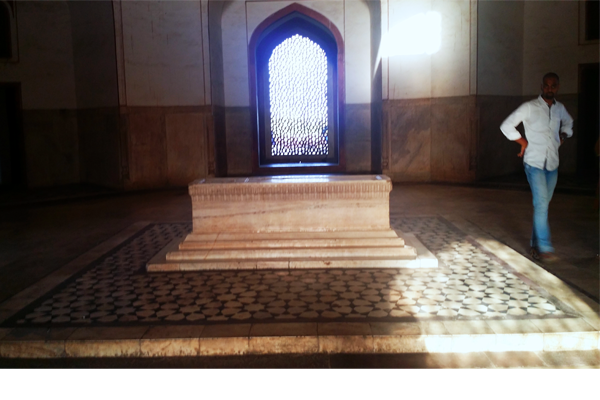 Humayun’s cenotaph stands alone in the main chamber; the real grave lies in the basement below 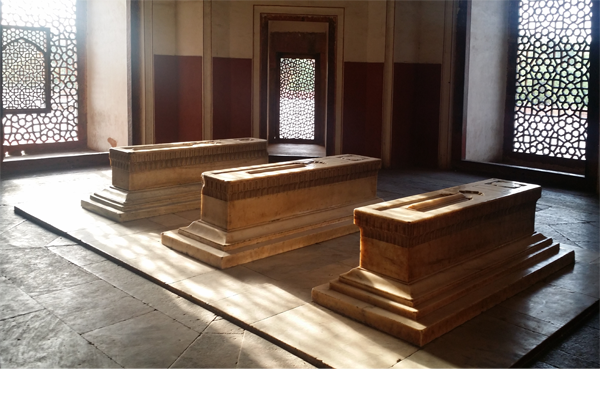 Side room with cenotaphs including that of Hamida Banu Begum and Dara Shikoh . 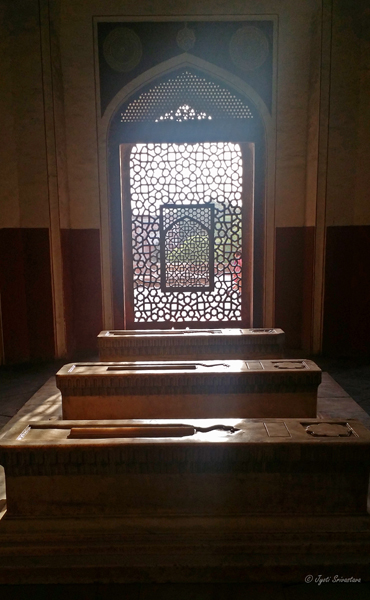 Jaali – Lattice screen – with symbolically cut out mihrab facing west or Mecca, over the marble

Stone Lattice and Spider Web: The tomb chamber is lit by light coming through jaalis [latticed screen]. It also allows breeze to enter, keeping chamber cool. But are these stone lattice inspired by spider web? There is an incidence in Quran when Prophet Mohammed and his companion were travelling from Mecca to Medina, and they were attacked. The took refuge in a cave. While they were inside, a spider spun a web across cave’s entrance. The enemies seeing the spider web, thought no one had entered the cave and left, leaving the Prophet unharmed. So spider web worked as a protector from enemies. 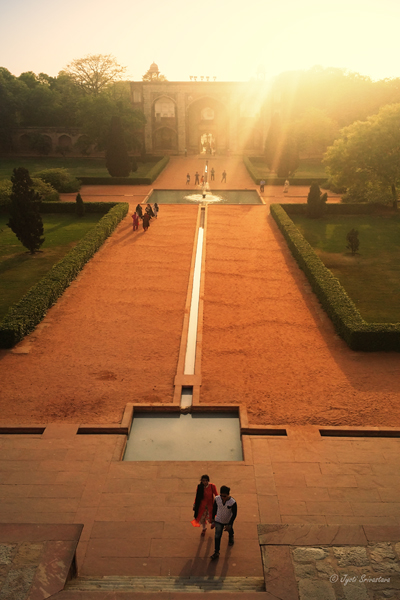 Char Bagh Garden [Four Gardens] is a Persian-style garden with quadrilateral layout. Humayun’s Tomb was the first of its kind in the South Asia region in such a scale. The highly geometrical and enclosed Paradise garden is divided into four squares by paved walkways [khiyabans] and two bisecting central water channels. These reflect the four rivers that flow in Jannat [the Islamic concept of paradise]. Each of the four square is further divided into smaller squares with pathways, a design typical of later Mughal gardens. The central water channels appear to be disappearing beneath the tomb structure and reappearing on the other side in a straight line, suggesting the Quranic verse, which talks of rivers flowing beneath the ‘Garden of Paradise’.

The entire tomb and the garden is enclosed within high rubble walls on three sides, the fourth side was meant to be the river Yamuna. The river has since shifted course away from the structure. The central walkways, terminate at two gates: a main one in the southern wall, and a smaller one in the western wall. Aligned at the center on the eastern wall lies a baradari, literally a pavilion with twelve doors, which is a building or room with twelve doors. On the northern wall lies a hammam [a bath chamber]. 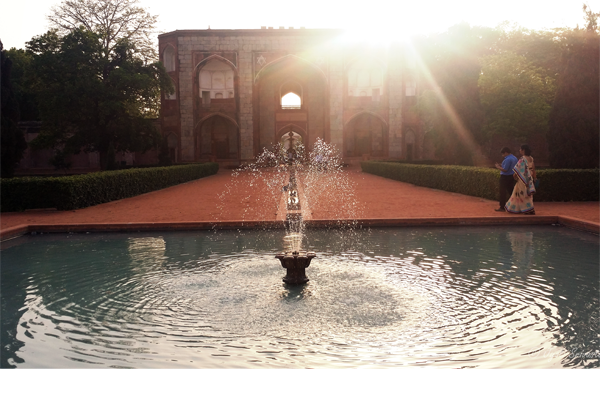 Charbagh Garden – Fountains at the end of water channels – a remarkable engineering innovation for the time. 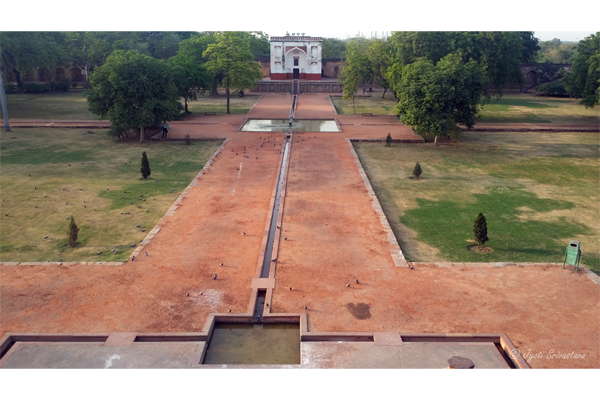 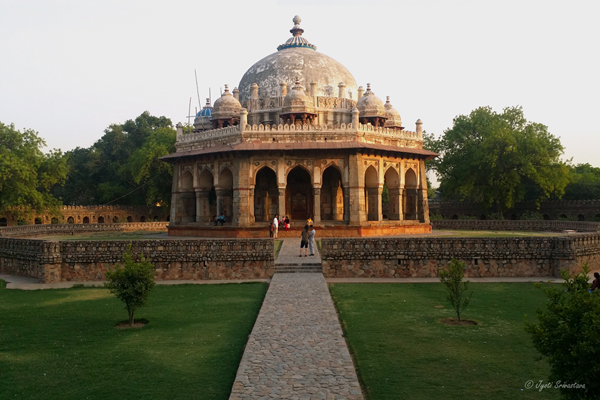 Several monuments dot the Humayun’s Tomb complex. Prominent among them is one tomb enclosure of  Isa Khan Nyazi – an Afghan noble in  court of Sher Shah Sure.  The enclosure includes a tomb and a mosque – both built during his own lifetime. Constructed in 1547 CE, this tomb pre-dates the Humanyn’s tomb, by 20 years.  It has striking ornamentation in the form of canopies, glazed tiles and lattice screen. Along the western side of the enclosure is a three-bay-wide mosque in red sandstone. 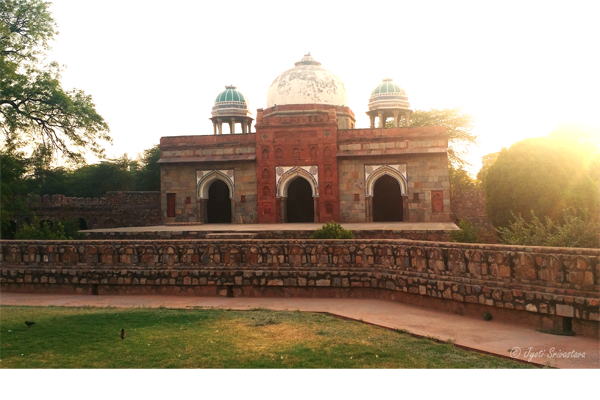 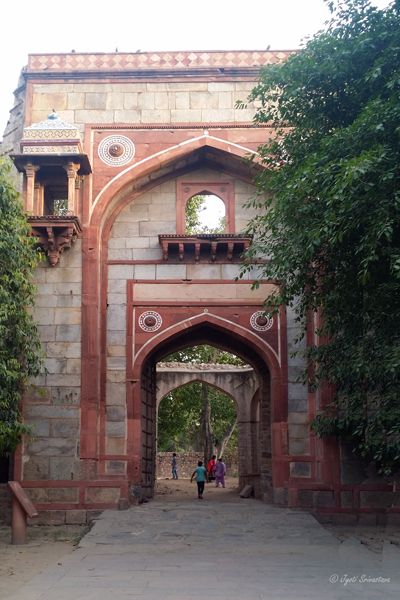 Gateway into Araba Sarai, south to the pathway towards Humayun’s tomb

Humayun’s Tomb conservation has been undertaken by the Aga Khan Trust for Culture and the Archaeological Survey of India [ASI] with the support of the TATA Trusts. The conservation efforts have helped preserve the monument for posterity. It is said to be the first ever conservation initiative undertaken by any non-government organization [NGO] in partnership with ASI at any of India’s World Heritage Sites.

Major conservation were required in the mausoleum and all attached structures, including the gateway, pavilions and the enclosure walls. While conservation works aims to recover the architectural integrity, authenticity of design, form and materials have been stringently maintained. 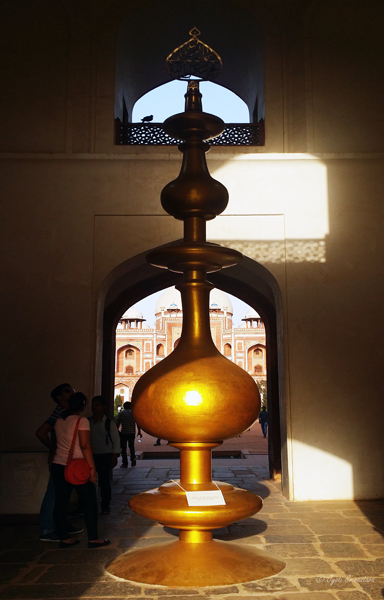 The restored finial comprises a 22-feet-tall octagonal log of wood, 300 kilos of copper, a brass inscription, at least six layers of gold leaf gilding, completed with a finishing of glass beads. An exhibition on the restoration efforts was conducted during the unveiling event along with a visual presentation of the preservation initiatives. 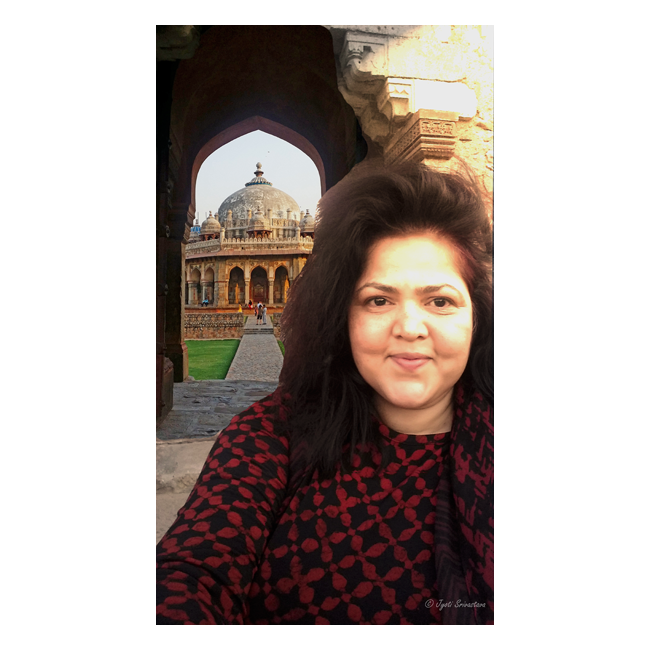 Finally a selfie in front of Isa Khan Nyazi enclosure