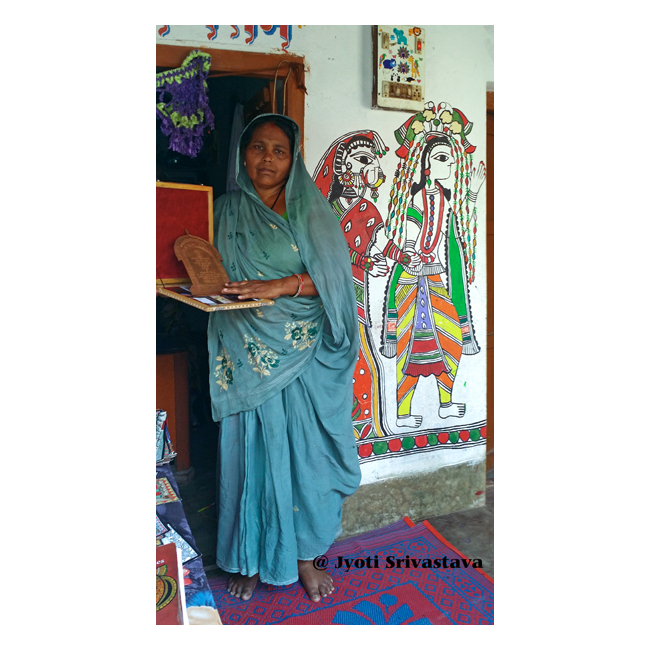 One of the highlights of my recent vacation in India, was meeting with the accomplished Madhubani painter Dulari Devi. She has won several awards, and many articles and books have been written on her. Madhubani art derives its name from the place where this art flourished – Madhubani – a town in the northern part of Bihar. The art is confined in and around that area, and is mostly practiced by women in the villages who have passed this art to their daughters through multiple generations. It is believed to be more than 2000 years old art form. This folk art has history, women’s monopoly and a distinct regional flavor! 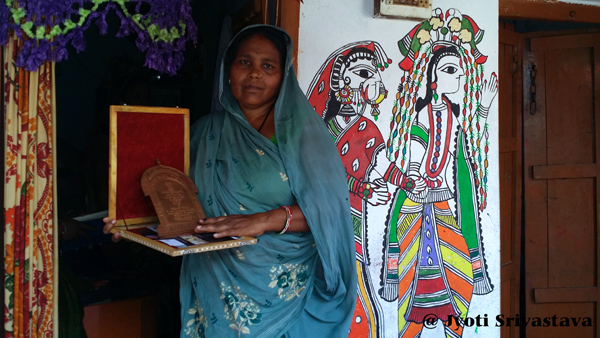 Madubani Art – Dulari Devi with her award / Bihar State Award for Excellence in Art in 2012-13.

Let me begin with the story about how we met with award winning artist Dulari Devi??

Our meeting with Dulari Devi was purely accidental!!!
I was intrigued by the vibrant Madhubani art, and wanted to visit any artist’s home to see how they practiced their art. But I have no ties with any Madhubani artists, so didn’t know who to meet, or even where to go. One day, talking to my cousin in Patna, I expressed my desire to go to Madhubani! He seemed very interested. That was a good sign!!! So we decided to take a road trip, and just find any artist in the village.

Thursday, April 28, 2016:
With no knowledge of any artists, and no appointments, we started our trip early morning. We stopped at several places to ask where to find any artist practicing Madhubani paintings. And on one such stop, we met with two men sitting in a roadside shop. One of them said that it was practiced at his home, by his wife!!! We requested him to take us to his home. He agreed.

We were still not aware who we were going to meet….
We were in Ranti village. Soon we were introduced to Dulari Devi. As our conversation progressed, we knew we had hit the jackpot!!! Dulari Devi has received several awards, including the Bihar State Award for Excellence in Art in 2012-13 [Presented by the Dept. of Industries, Government of Bihar].

Now this is another interesting story. Dulari Devi’s life story is nothing short of inspirational. Her’s is the story of a domestic helper, who went on to become an award-winning artist. She grew in a family of fishermen. It was difficult to make ends meet, and she had to contribute to family income. So she started working in people’s homes, washing dishes. She never went to school, and never received any training for another job. So even when she grew up, she continued working as a maid, washing dishes.

Her life changed when she started working in the house of artist Mahasundari Devi, as a maid.  Mahasundari Devi was an acclaimed artists, with national and state awards. She was considered to be a “living legend” of the art of painting. She left the “purdah (veil) system” which was prevalent at the time, and created her own niche as an artist. She founded a “cooperative society” which supported the growth and development of handicrafts and artists. In 2011, she received Padma Shri award from the Government of India.

Dulari Devi observed Mahasundari Devi paint, and requested to teach the skill. It was like the latent artist in Dulavi Devi was waiting for an opportunity to manifest and flourish! She quickly learnt the skill, and became a prolific painter. Soon people began noticing her art. Recognition was followed by increased sales. Money and fame made her a much more confident artist! Her story has been published in a book “Following My Paint Brush”.

Despite her success story, Dulari Devi is very unassuming. Although her life has improved from what it was, she still has a modest living. She was delightful to talk to, and we were so lucky to have found her. We requested to see her paintings and she willingly showed us. We bought some paintings. We can never be thankful enough for her time with us.

Above video [one minute] : As Dulari Devi was showing her paintings, the children from the neighborhood, gathered to see what was happening. Meet Dulari Devi, Rinku Devi [daughter-in-law], and neighbourhood children Sujita, Sandhaya, Sunaina, Chanda Devi, Puja Kumari and Shiv Kumar.

Image video [two minutes]: A typical household in Ranti Village with Madhubani paintings on the wall. There are gods and goddesses Rama, Laxman, Sita, Hamumana, Shiva, Durga and krishna, as well as contemporary themes. Also notice the symbols of fertility and prosperity: fish, turtle, parrot, conch shell, and lotus.

What is Madhubani Art?

There are few very distinctive features of this painting style,  which makes it a unique art form..

– Madhubani paintings been have traditionally created by the women in the villages. They pass this art to their daughters, and this has been carried out through multiple generations.
– Madhubani painting has remained confined to a compact geographical area. And that is the reason for Madhubani painting being accorded the coveted GI (Geographical Indication) status.
– The skills have been passed on from generation to generation through centuries. However, the content and style have largely remained the same. The central themes of most paintings are love, valor, devotion and fertility. It is common to find scenes of courtship and marriages and symbols of fertility and prosperity like fish, parrot, elephant, turtle, sun, moon, bamboo tree, lotus, etc. in prominence.
– Originally, colors used were derived from plants. Ochre and lampblack are also used for reddish brown and black respectively. Nowadays synthetic colors are used. But some traditional artists still make their own colors by extracting them from plants. Traditioannly they use twigs, brushes, matchsticks or nib-pens to make paintings. The coloring is of two styles: Kachni (hatching) and Bharni (shading.) Kachni uses delicate fine lines to fill the painting and not much color is used. Bharni (shading) uses solid colors to shade and fill the pictures. It uses black outlines filled with vibrant colors.
– The exact time when Mithila art originated is not known. Folklore has it that origin can be traced to the time of the Ramayana, when King Janaka of Nepal ordered his kingdom to decorate the town for the wedding of his daughter, Sita, to Lord Rama. As such, its heritage goes back at least 2,500 years.

How was Madhubani Art discovered?

Although Madhubani art has centuries old heritage, it was as a domestic ritual activity, and was unknown to the outside world. In the words of Karpuri Devi [daughter of Mahasundari Devi, and an artist in her own right].. “Decades ago, women in the village were not allowed to step outside the confines of the home. We had to be very discreet about our work. For years, the wall was our canvas. Paper came much later.”

It is only recently that Madhubani Art received national and international attention. It was discovered accidentally during a natural calamity in the early 20th century. In 1934, there was a massive earthquake on the India-Nepal border and the houses and walls tumbled down. Then British colonial officer in Madhubani District, William G. Archer, while inspecting the damage “discovered” the paintings on the newly exposed interior walls of Mithila homes. He was struck by reported similarities to the work of modern Western artists like Miro and Picasso. During the 1930s he took black and white photos of some of these paintings, which today are the earliest images of the art. He also wrote about the painting in a 1949 article in ‘Marg’ an Indo-Nepal Art Journal.

Another natural calamity made the art flourish as a source of income. The drought from 1966 to 1968 crippled the agricultural economy of the region. As part of a larger initiative to bring economic relief to the region, Ms. Pupul Jayakar, the then Director of the All Indo-Nepal Handicrafts Board, sent the Bombay-based artist Mr.Bhaskar Kulkarni to Mithila to encourage women there to replicate their mural paintings on paper which, to facilitate sales, as a source of income to ensure survival. 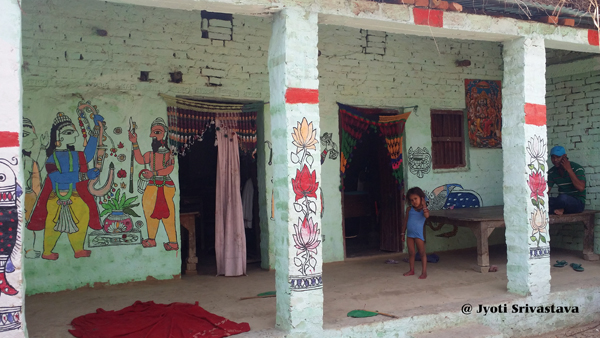 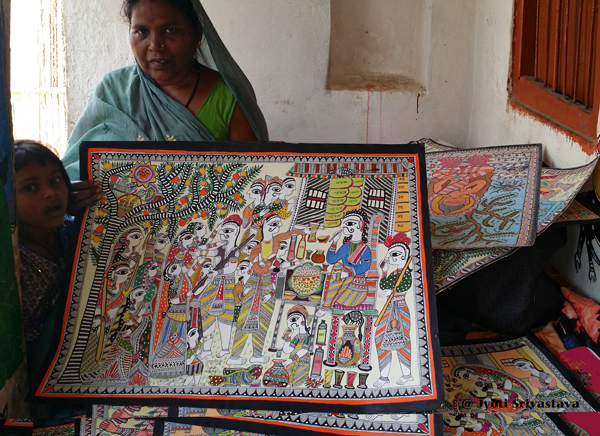 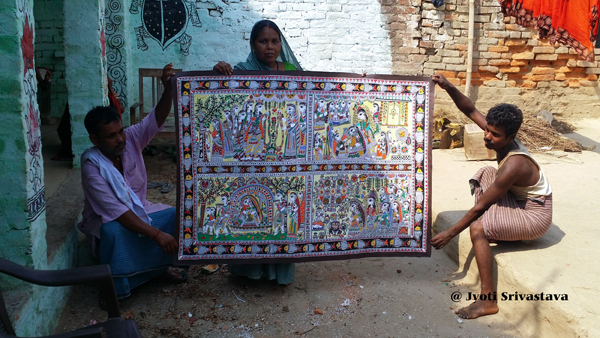 Dulari Devi showed us some paintings. She showed paintings by her and her students. It was time to buy a few. I purchased five paintings from her. What I liked the most, is that there were no middlemen. I bought the paintings directly from her, at her residence! I have reasons to believe that middlemen gobble up a lot of money. This was all going straight to her. 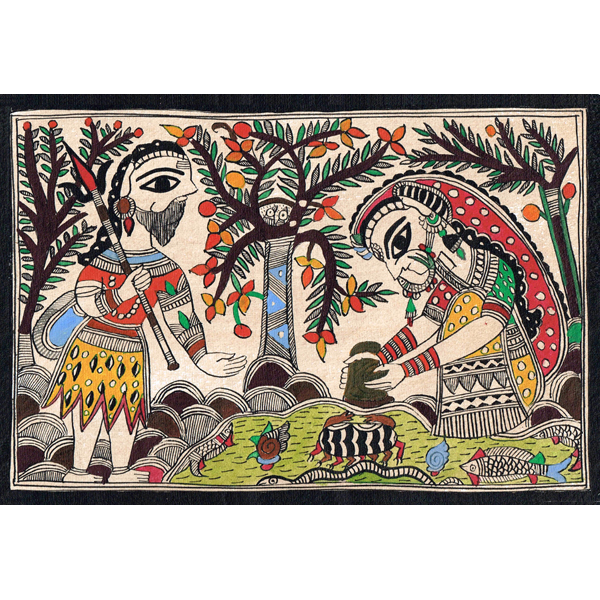 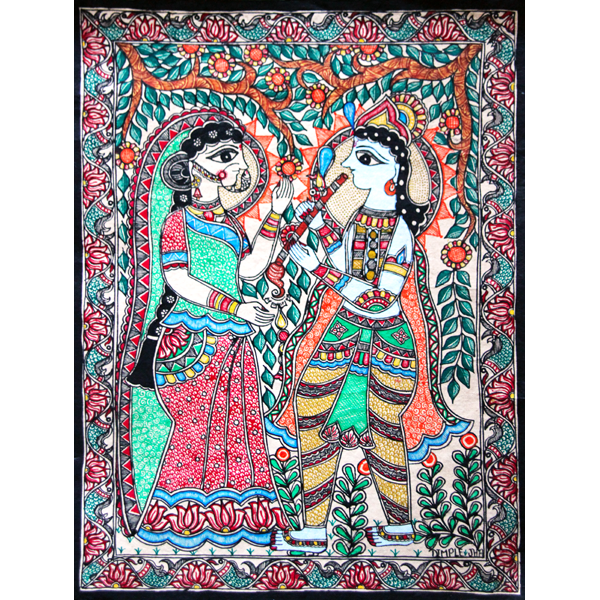 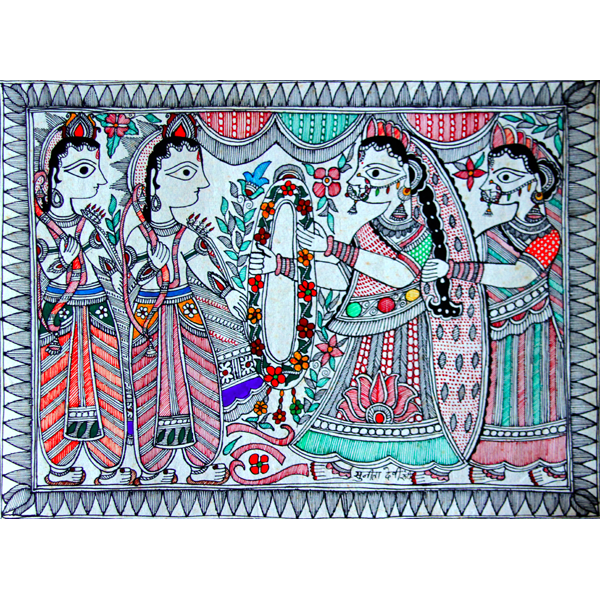 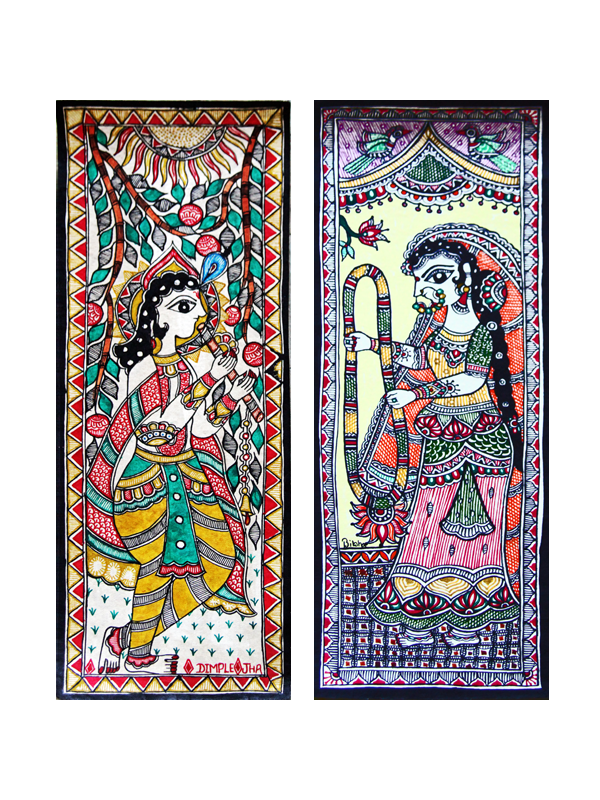 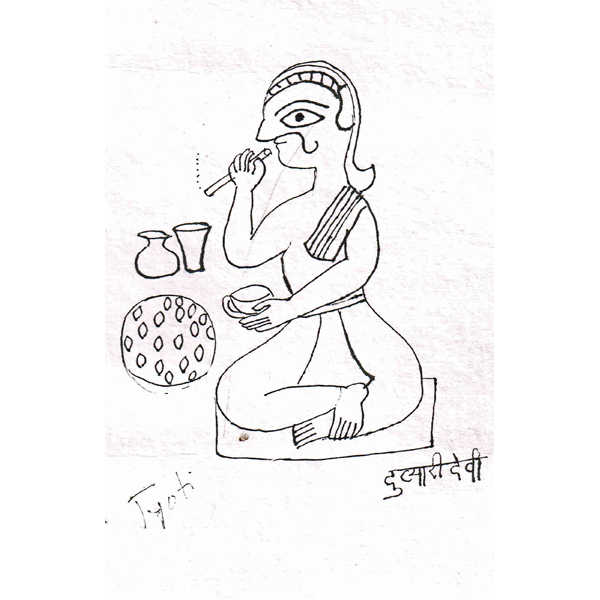 Madhubani Art / Dulari Devi drew this in front of us.. and gifted it to me.