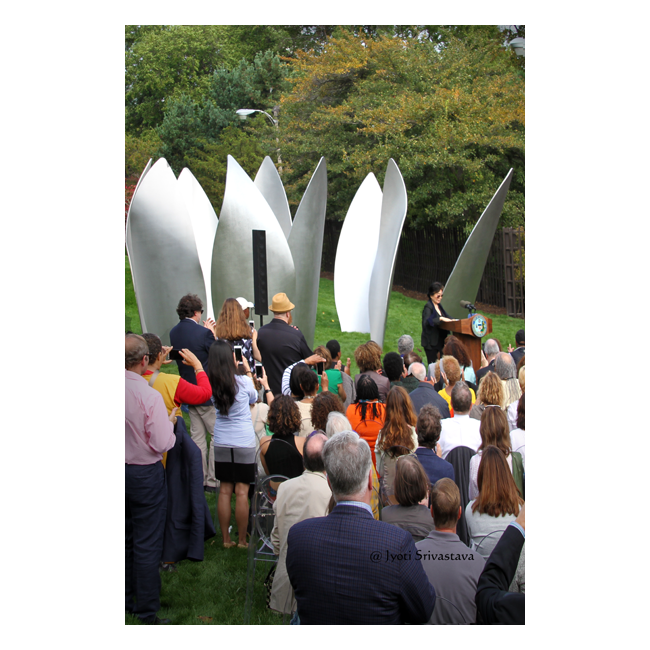 Sky Landing is funded by the nonprofit Project 120,
which has been investing in upgrades for the park including planting cherry trees and a visitors center.

PHOTO DOCUMENTATION of UNVEILING and DEDICATION of SKY LANDING by YOKO ONO. 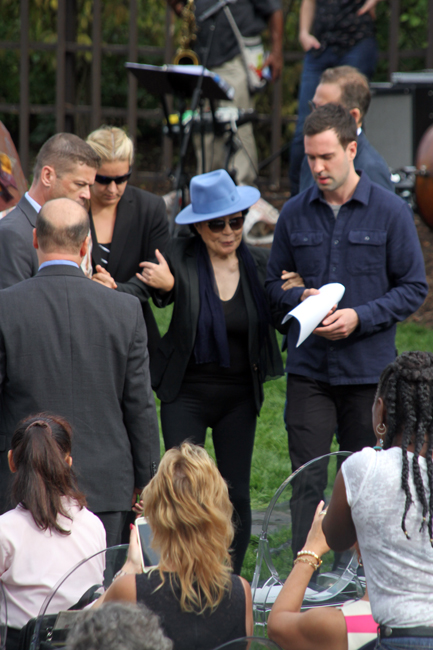 “Sky Landing” is a sculpture-&-landscaping installation which consists of a 12 steel lotus petals, each about 12-foot-tall rising up from the ground as a gesture of peace, hope and renewal. The sculpture is surrounded by mounds that form the yin yang symbol representing opposing but complementary forces found in all things in the universe.

A 13th steel lotus petal – “Mended Petal” – was dedicated at the Art Institute of Chicago, on Tuesday, October 18, 2016. It has been mended in the Japanese tradition of Kintsugi.

Sky Landing sits at the entrance of the “Garden of the Phoenix”, a Japanese garden on the site of the “Phoenix Pavilion” that Japan gave Chicago during the 1893 World’s Columbian Exposition.

Last year, a “Ground Healing Ceremony” was held  on June 12, 2015 , to prepare the site for the installation of “Sky Landing”. Actually, the ground-breaking event was designated a “Ground Healing,” to establish the site as a bridge between sky and earth.

City of Chicago Mayor Rahm Emanuel said, “the idea is that Sky Landing will become a place of congregation and contemplation”.

Sky Landing is a public-private partnership. It has been funded non-profit Project 120, with the Chicago Park District overseeing the project; which is part of a larger revitalization of the park.

Sky Landing is a part of a broader ongoing renovation of Jackson Park, which includes ecological restoration and a return to how it looked when it was originally designed by famed landscape architect Frederick Law Olmsted. Sky landing has been installed in harmony within the existing surrounding gardens and habitats of Jackson Park. The renovation also includes a new pavilion at a restored Jackson Park Music Court.

Also noteworthy is that Jackson park if the future home of Barack Obama presidential library. 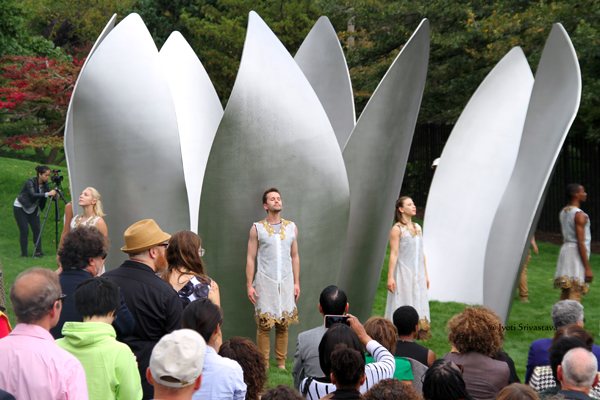 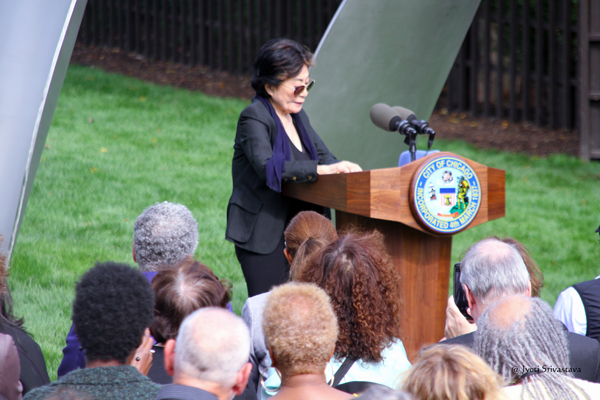 Carol L. Adams poured libation at the beginning of the dedication.

Mayor Rham Emanuel talked about the “Public Art Chicago: 50 for 50 Campaign” which aims to put a public art project in each of Chicago’s 50 wards. He said,  “With great works of art like Sky Landing, we provide residents and visitors growing access to arts and culture in neighborhoods across Chicago. We look forward to continued work with Project 120 on improving our historic parks and bringing history, art and nature together in our public spaces.”

The ceremony included the release of limited-edition eight-track compact disc “Sky Landing”. It features songs written by Yoko Ono and Chicago musicians led by Tatsu Aoki of the Miyumi Project.

Sky Landing – by Yoko Ono
Sky Landing is arguably the most location-specific and symbolically-significant
public art installation in Chicago..
Brief Story behind the location [Phoenix Garden] and the name [Sky Landing].

The location of Sky Landing – the Phoenix Garden in Jackson Park – was once the site of the Japanese Phoenix Pavilion during the 1893 World’s Columbian Exposition. Emperor Meiji of Japan gifted the Phoenix Pavilion to the city of Chicago. The Phoenix Pavilion, known as Ho-o-den was first designed by Masamichi Kuru, and prepared in Tokyo. It was reassembled in Chicago by Japanese workmen.  Ho-e means Phoenix, and den in this case was the pavilion.  Japan – the Land of the Rising Sun – has been from ancient times considered the birthplace of the Ho-o, or Phoenix.  Phoenix represents regeneration or rebirth. The Phoenix Pavilion at the Columbian Exposition of 1893, was very symbolic,  as it  showed to the world that Chicago had risen from the ashes of the Great Chicago Fire of 1871. The pavilion was one of the most notable pieces of Japanese architecture in the United States.

After the Exposition, it remained here as a gift to the city, and was intended to provide a place for Americans to continue to experience Japanese culture and for nature to flourish. The South Park District [now the Chicago Park District] maintained the building as a symbol of friendship between the two countries. It survived the Second World War. However, after more than 50 years in the Wooded Island,  the Phoenix Pavilion was burned down in 1946 in an act of vandalism.  Few pieces survived the fire. It includes four exquisitely carved – ranma panels – wooden  architectural transoms. These were stored under the bleachers of Soldier Field and were discovered in 1973 by Chicago Park District. Two of the ranma panels can be seen at the Art Institute of Chicago.  Interestingly, last year, three sliding doors, known as fusuma were discovered in Park District storage facility, creating quite an excitement among Chicago historians and art aficionados… click here..

Sky Landing is at the location of the burned down Phoenix Pavilion.
It is a lotus rising from the ashes of the lost Phoenix.
Lotus is a universal symbol of peace and resurrection.

The concept of Sky Landing was conceived in 2013, during an invited visit by Yoko Ono, as Project 120 had planted over 120 cherry trees as part of an evolving plan to restore the Japanese Garden and create ways that would serve as a living history lessons honoring Frederick Law Olmsted, and the Columbian Exposition. Ono was immediately drawn to and struck by the power of the place…  She recalled,

“I recall being immediately connected to the powerful site,
and feeling the tension between the sky and the ground.
I wanted the sky to land here, to cool it, and make it well again.”

Once the vision for Sky landing was complete, a “Ground Healing Ceremony” was held  on June 12, 2015 , to prepare the site for the installation.  On October 17, 2016, Sky Landing was dedicated.

Sky Landing represents the continued legacy of eastern and western unity and ensures that the site of the Phoenix Pavilion remains that of a cultural hub of enlightenment and discovery.

Yoko Ono was born in 1933 in Tokyo, Japan.  Her first name Yoko means “Ocean’s Child”.  At the age of two she moved to west coast of the United States,  and then back to Japan shortly before the outbreak of war in 1941. The sky has held a powerful significance for the artist since her youth when she and her younger siblings were sent to the countryside in the spring of 1945 to escape the bombings of Tokyo. She recalls.. “Towards the end of the Second World War, I looked like a little ghost because of the food shortage. I was hungry. It was getting easier to just lie down and watch the sky. That’s when I fell in love with the sky, I think. Since then, all my life, I have been in love with the sky. Even when everything was falling apart around me, the sky was always there for me.”

Sky Landing, which is a rising lotus,  symbolizes peace and at once reminds us of the song “Give Peace a Chance” written by her husband John Lennon [credited to Lennon–McCartney], and performed with Ono in Montreal, Canada. Released as a single in 1969, it became an anthem of the American anti-war movement during the 1970s.  Ten years later, in 1980, her husband John Lennon was killed in gun shooting violence. Yoko Ono who has witnessed the Second World War, and the brutal assassination of her husband  is now a world renowned peace activist. 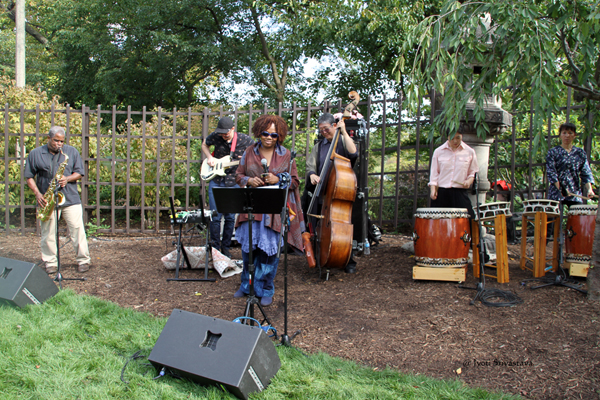 Here is vocalist Dee Alexande, with Tatsu Aoki and the Miyumi Project.

The sculpture-landscape installation is beautiful. But it was the music-&-dance at the ceremony that elevated the event to another level – making it a spiritual experience!! It created a perfect ambiance for Sky Landing : Peace Rising!

Tatsu Aoki’s Miyumi Project: is  a “Chicago style jazz innovation” –  a collaboration between African American and Asian-American jazz artists. The Miyumi Project explores a nexus of past and present cultures and is widely recognized for a groundbreaking merger of music from East and West.  Tatsu Aoki is a Chicago-based artist, composer, musician, educator and a consummate bassist. … click here..

Dee Alexander is a Chicago based vocalist and song writer… click here..

“Skylanding” was unveiled on the lyrics of “Rising” by Yoko Ono.
Vocalist was Chicago’s versatile jazz singer Dee Alexander.
Music was conceived by Yoko Ono in collaboration with Chicago bassist-bandleader Tatsu Aoki,
and performed by Tatsu Aoki’s Miyumi Project.

LYRICS: RISING – by YOKO ONO
Listen to your heart
Respect your intuition
Make your manifestation
There’s no limitation

Have courage
Have rage, we’re all together 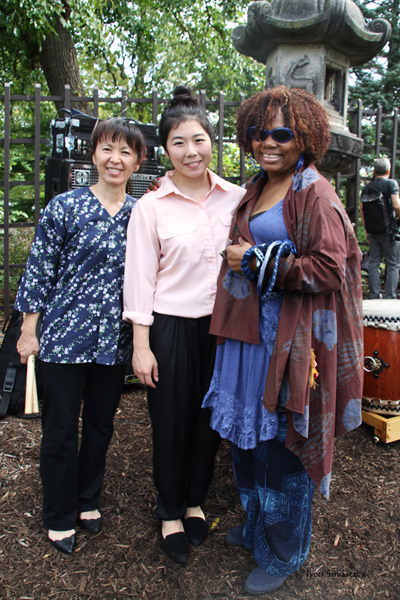 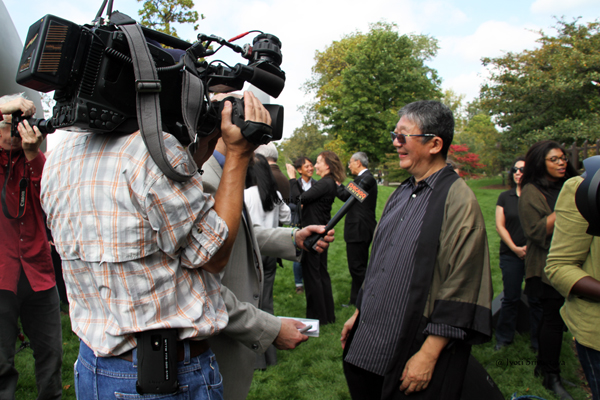 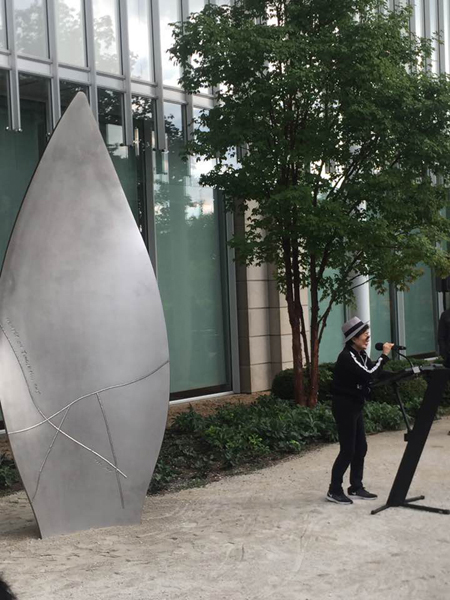 As mentioned earlier, a 13th steel lotus petal – Mended Petal-  has been installed at the Art Institute of Chicago.
It has been mended in the Japanese tradition of Kintsugi.

What’s special about Kintsugi?
“Most people would like damages to their broken items to be concealed and hidden by repair making the object look like new. But the Japanese art of Kintsugi follows a different philosophy. Rather than disguising the breakage, kintsugi restores the broken item incorporating the damage into the aesthetic of the restored item, making it part of the object’s history. Kintsugi uses lacquer resin mixed with powdered gold, silver, platinum, copper or bronze, resulting into something more beautiful than the original.”
Reference: Kintsugi ..click here.. 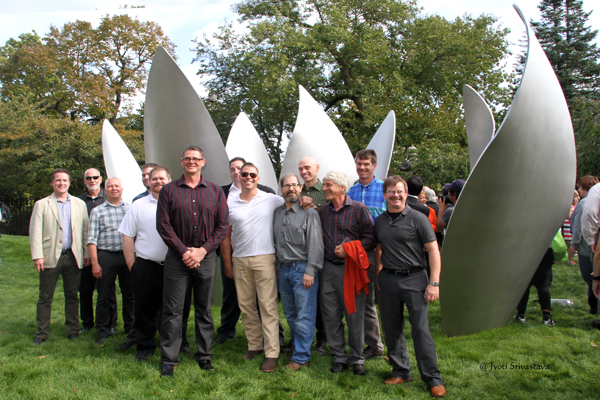