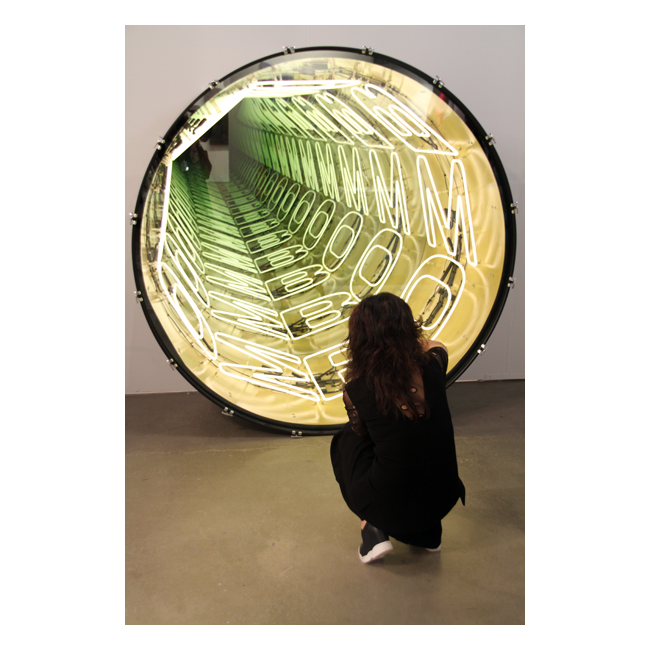 When I was at the EXPO, I saw Tony Karman, President and Director of EXPO Chicago. It was morning of Day One of the exposition, and I knew his mind would be preoccupied with a million things to do. I was wondering if was proper to request him for a photo. But I really wanted one! Well, quite hesitantly I approached him and said.. “I know you are extremely busy, but could I please take your photo.” His response, “Of Course. We are in this together!” His words at once made me feel so good. I know it’s not the first time he said it. I am sure many others have said it. But still it made an immense uplifting positive impact on me.

“We are in this together.” These are powerful words. As Robin Williams said, “No matter what people tell you, words and ideas can change the world.” And we have world history to prove it. But at EXPO, my mind was not in world history, but in the art-world. So I thought why not take a note of the text-based art.

Text Art is usually associated with Pop Art. Robert Indiana’s famous “Love” and “Hope” art. Roy Lichtenstein’s words like “Wham”, Blam”, Varoom” and “Kapow”;  or lines like “I Dont Care! I’d Rather Sink Thank Call Brad For Help”.  Another influential name would be Ed Ruscha, with his “20th Century Fox” sign! Then of course the iconic “Hope” poster for Barack Obama’s 2008 presidential campaign was designed by artist Shepard Fairy.

Coming home to Chicago, we have seen work by Matthew Hoffman, “You Are Beautiful,” and “Go For It”. Jason Pickleman’s graphics and logos. We also had large scale exhibition by Indiana based Kay Rosen’s “Go Do Good.”

So this EXPO 2016, I decided to pay attention to Text based Art!

I saw art by Ivan Navarro, Alfredo Jaar, Deborah Kass, Julio Cesar Morales, Mel Bochner, Hank Willis Thomas and Antoni Muntadas. I learned that most of Text Art have origins in social justice and political movements. Here are some of the art and a brief bio of the artist. 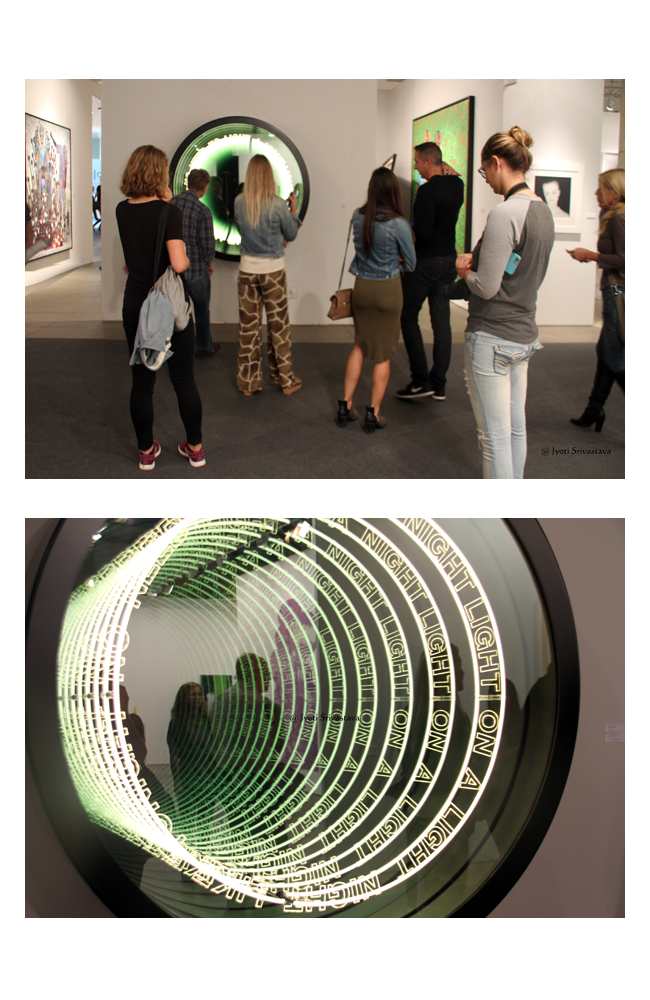 IVAN NAVARRO is an artist who works with light, mirrors, and neon to craft socially and politically relevant sculptures and installations. He was born 1972 in Santiago, Chile, and grew up during the dictatorship of General Augusto Pinochet. The dictatorship of his homeland has had a profound impact on his work, both in his choice of medium, and in the meaning his neon sculptures. Navarro was used to electricity being shut off to keep citizens at home and isolated; “All the pieces that I’ve made make reference to controlling activity, and electricity was a way to control people.” 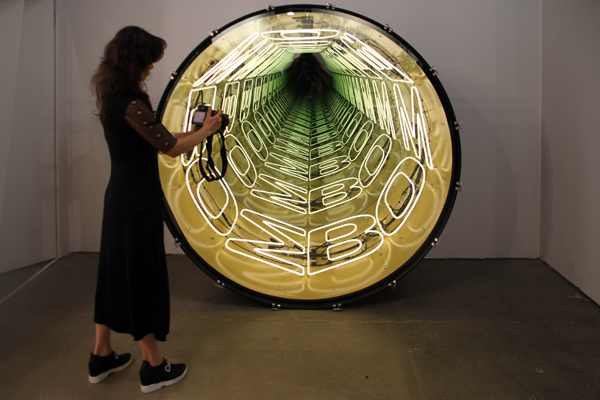 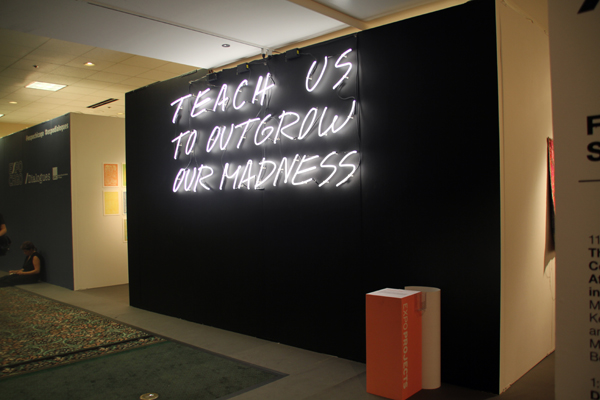 Teach Us to Outgrow Our Madness [1995] – by Alfredo Jaar /
Courtesy of Human Rights Watch.

ALFREDO JARR  is mostly known as an installation artist, often incorporating photography and covering socio-political issues and war. He is best known perhaps being the 6-year-long The Rwanda Project about the 1994 Rwandan genocide. He has also made numerous public intervention works. “There’s this huge gap between reality and its possible representations. And that gap is impossible to close. So as artists, we must try different strategies for representation.”

Human Rights Watch [HRW], a leading international human rights organization dedicated to defending and promoting human rights around the world, in partnership of Rhona Hoffman Gallery, presents Chilean born artist, architect, filmmaker and activist Alfredo Jaar’s “Teach Us to Outgrow Our Madeness”. Created specifically for EXPO Chicago, and inspired by writings of Nobel laureate Kenzaburo Oe, Jaar’s piece highlights the responsibility of each generation to learn from those who came before us. At once urgent and optimistic, the piece reflects the organization’s mission to protect human dignity wherever it is threatened. 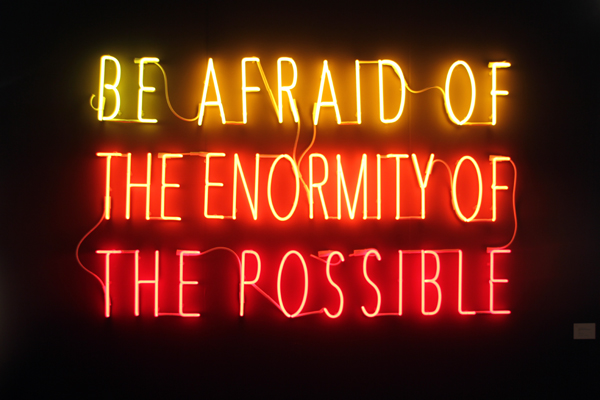 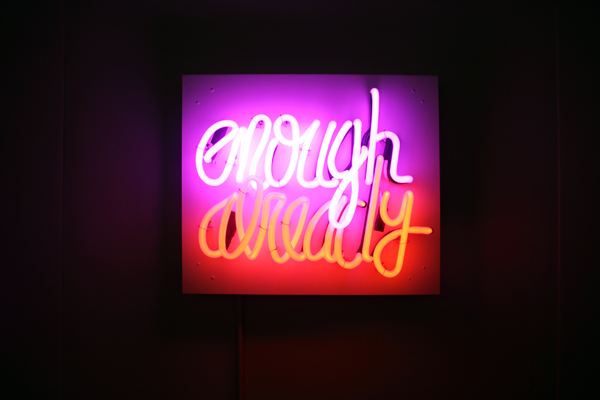 DEBORAH KASS  was born in 1952 in San Antonio, Texas. She lives and works in Brooklyn. Her work explores the intersection of pop culture, art history, and the self. Deborah Kass works in mixed media, and is most recognized for her paintings, prints, photography, sculptures and neon lighting installations. The artist mimics and reworks signature styles of iconic male artists of the 20th century including Frank Stella, Andy Warhol, Jackson Pollock, and Ed Ruscha. Kass uses appropriation in her work to explore notions of identity, politics, and her own cultural interests to alter the world of contemporary art and create a new hybrid of its own. Her work is found in the Museum of Modern Art, The Whitney Museum of American Art, The Guggenheim Museum, The Jewish Museum and countless other public and private collections 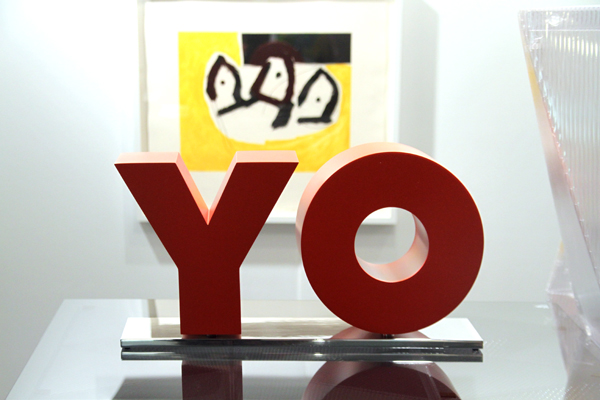 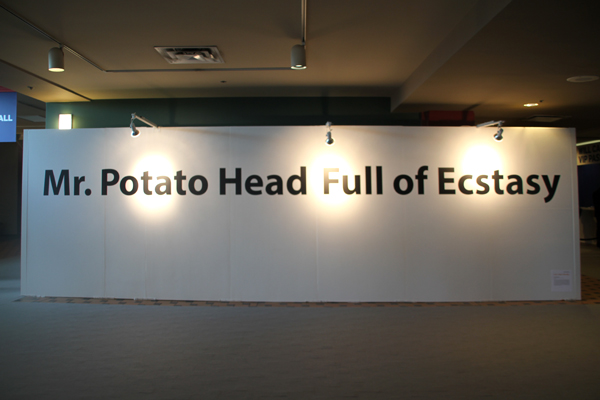 JULIO CESAR MORALES’s work seeks to illuminate the strange and the poetic in the political, particularly surrounding issues of displacement, migration, and informal economies. His approach involves extensive research; Morales collects images and anecdotes from media sources related to the often illicit trafficking of goods and people. For Narco Headlines, which was originally presented as a suite of handmade text-based drawings, Morales drew on his archive of internet news headlines relating to drug smuggling methods that were intercepted and thwarted by the authorities. These de-contextualized snippets of language function simultaneously as irreverent, absurdist poem-like testimonials to failed smuggling attempts, while also revealing the desperation-fueled ingenuity of underground economies. 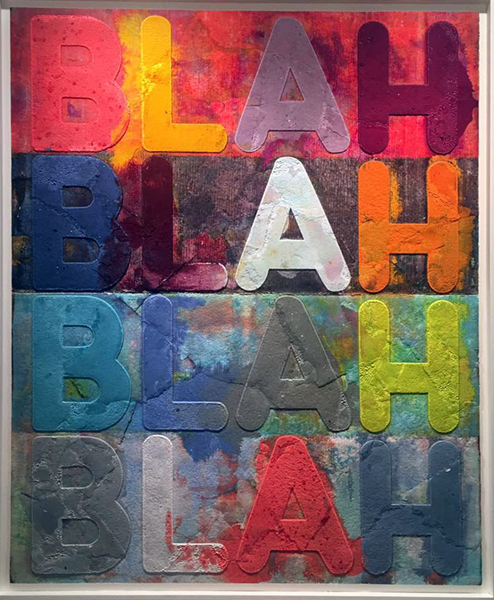 MEL BOCHNER  was born 1940 in Pittsburgh, Pennsylvania. He is an American conceptual artist. He moved to New York City in 1964, and became involved in two of the major movements of the period — Minimal Art, which was already being developed by artists such as Donald Judd, Dan Flavin, and Sol LeWitt; and Conceptual Art, a then-nascent movement of which Bochner would become a key figure. Starting in the 1960s, he evolved several of the exhibition strategies now taken for granted, including using the walls of the gallery as the subject of the work and using photo documentation of ephemeral and performance works.

It’s Not About You / It’s All About You – by Hank Willis Thomas
Jablonka Maruani Mercier Gallery.

HANK WILLIS THOMAS was born in 1976 in Plainfield, New Jersey. He is a contemporary African-American visual artist, photographer and arts educator whose primary interests are race, advertising and popular culture. He received his BFA from New York University’s Tisch School of the Arts and his MFA in photography, along with an MA in visual criticism, from California College of the Arts (CCA) in San Francisco. 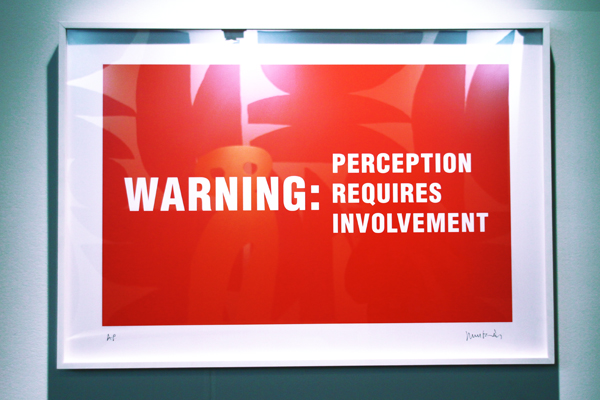 ANTONI MUNTDAS  was born in 1942, in Barcelona, Spain. He is a multidisciplinary installation and media artist. Antoni Muntadas was an early pioneer of video and installation in the mid-seventies, and he has continued to work with photography, video, installation, audio recording, and urban intervention. Over four decades, Muntadas has been creating projects, which critically reflect on key issues in the configuration of contemporary experience. His aim is to detect and decode the control and power mechanisms through which hegemonic ways of seeing are built, exploring the decisive role played by the mass media in this process. 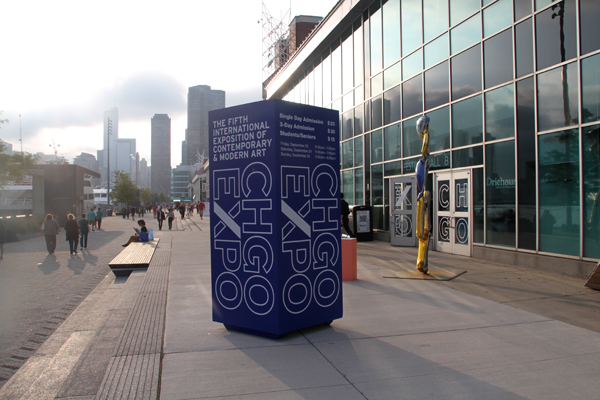 Not to be missed is the The graphics of EXPO Chicago!

2016 being an election year, text-based art has again become very important with snappy slogans like, “Stronger Together”, and “Make America Great Again”..  And I will end with selfie with Tony Karman. I will caption it, “We Are In This Together”. 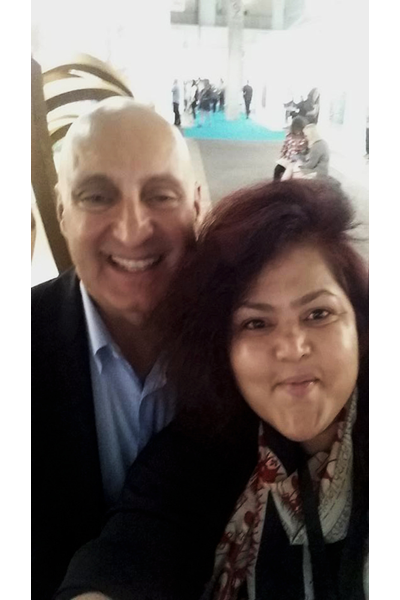 Selfie with Tony Karman . We are in this together. EXPO, Chicago, 2016.