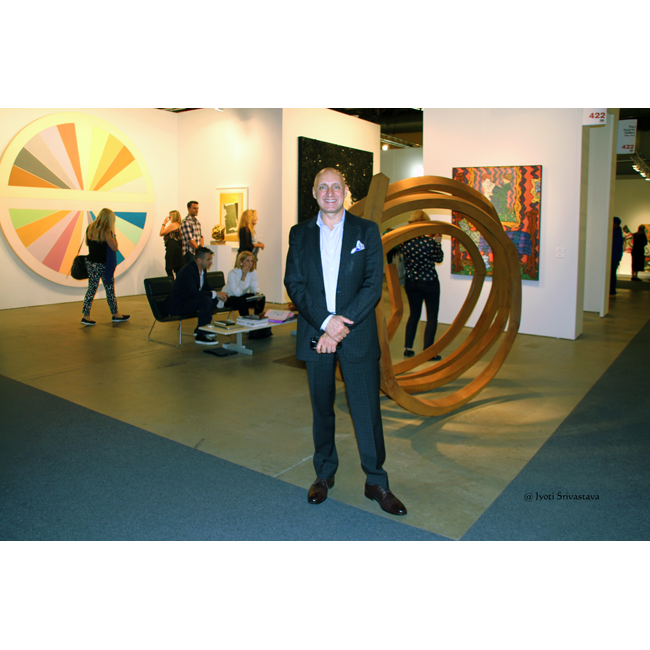 The 2016 EXPO CHICAGO, was the Fifth International Exposition of Contemporary & Modern Art. 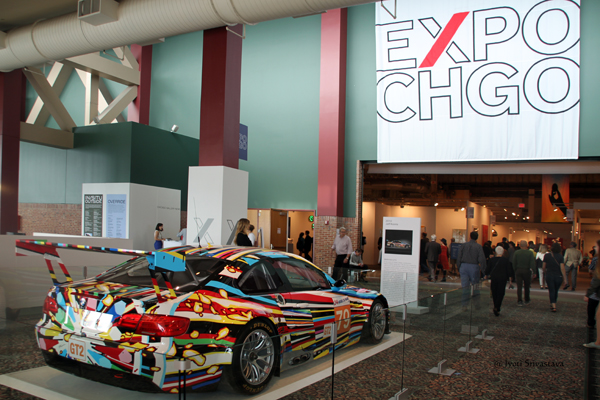 When you see an Art Car – a BMW painted by Jeff Koons – right at the entrance, you know you are entering a world class exhibition. Your expectations are already high.

When you see an image of a hand holding an egg, as an “art piece”, you know you are into a “contemporary” art exhibition!

And, when you see works by Joan Miro, Jaume Plensa and Magdalena Abakanowicz, you know how lucky you are to be living in Chicago.. where large-scale sculptures by these artists are a part of Chicago’s amazing Public Art collection, and can be seen at public places – free and open – for all to see!

Then I ran into a number of artist friends. Sharon Bladholm, Neil Goodman, Suzanne Cohan-Lange, Jason Hawk, Claire Molek, Deanna Krueger, Julia Haw and Dzine Rolon.. and I knew this is a much anticipated exhibition and has a wonderful audience.

Today, September 28, that is 6 days after I attended the exposition,  I feel I can write down what appealed to me in EXPO 2016. 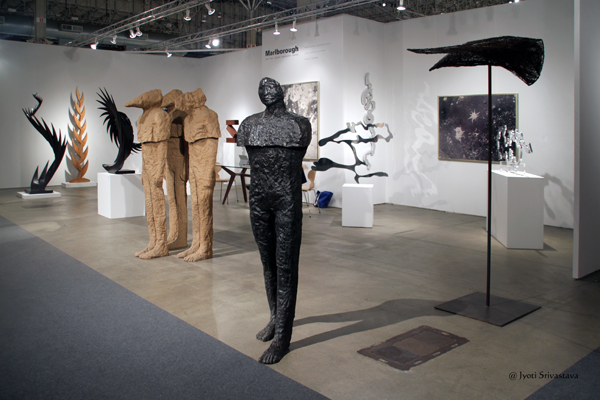 EXPO CHICAGO, is the International Exposition of Contemporary and Modern Art. The year 2016 marked its fifth edition, which started in year 2012. Expo Chicago is city’s major art fair and has been instrumental in attracting renowned galleries, curators, critics and collectors from around the world.

The 2016 EXPO CHICAGO featured about 145 leading galleries, from 53 cities, representing 22 countries from around the world. One can see what’s at display in art galleries at London, Berlin, Paris, Amsterdam, Madrid, San Francisco, Rome and New York City!

The 2016 program included – EXPOSURE – a section that affords younger galleries the opportunity to participate in a major international art fair.

EXPO ART WEEK (September 19–25, 2016) – With EXPO CHICAGO as the centerpiece, EXPO ART WEEK is presented in conjunction with Choose Chicago, the city’s tourism and marketing organization, and Chicago’s Department of Cultural Affairs and Special Events (DCASE). Museums and galleries across the city are celebrating the major international art exposition.  “Never before have so many events and openings been aligned with an art fair in Chicago — and no other city in the world would marshal the collaborative partnerships that have been created as a part of this special week.” – Tony Karman.

The year 2016 marks the inaugural project – OVERRIDE | A Billboard Project – a citywide public art initiative featuring 15 artists on 28 of Chicago’s digital billboards, providing EXPO CHICAGO a key opportunity beyond Navy Pier to showcase works in neighborhoods throughout the city.

In 2015, over 35,000 people attended the exposition and participated in off-site activities hosted by local institutions, non-profit organizations, and galleries. 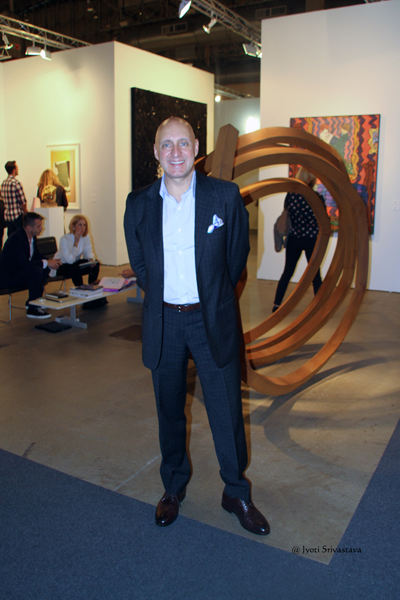 Tony Karman is the President and Director of EXPO Chicago. he has been active in the civic, business and cultural communities of Chicago for over 30 years. Karman’s past work includes: Vice President / Director of Art Chicago [Merchandise Mart Properties Inc.]; Principal KARMAN Projects Inc. [providing sponsership, acquisition, strategic brand development and marketing coordination for international clients], Director of Marketing and Development for the Auditorium Theater Council; and Associate Director, Department of Cultural Affairs, City of Chicago.. among others.

Originally for Rock Island, Illinois, Karman attended Augustana College and Kansas State University where he obtained a Bachelor of Fine Arts degree. In 2014, he was awarded an Honorary Doctorate from Columbia College, Chicago. He has traveled extensively and established numerous professional alliances and relationships around the world. He is a long-time resident of Chicago, where he lives with his wife Sondra Karman. 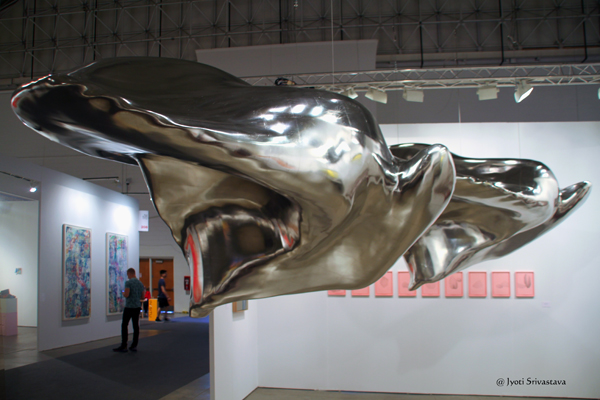 Of the more than 140 galleries I saw, the three I loved the most were the Marlborough Gallery, The Richard Gray Gallery, and Paul Kasmin Gallery.

I am particularly interested in sculptures. Some that I loved the most: “Storm Prototype” by Iñigo Manglano-Ovalle; “The Son of a Gigant” [2003] by Magdalena Abakanowicz [Marlborough Gallery]; “The Card Players” [2016] by Nicholas Guagnini [Bartolami Gallery], sculpture-set by Anthony Caro; and “Maquette for Centrifuge” by Roxy Paine [Paul Kasin Gallery].

As expected there were many remarkable paintings. Paintings by Phyllis Bramson, “God Keeper of All Living Things” [2016]; Untitled by William N. Copley [Paul Kasmin Gallery]

One major highlight was a video – a satirical video – “The Father of His Country”[2016] by Federico Solmi [Gallery: Luis De Jesus, Los Angeles]. Salomi is New York based artist. He uses bright colors and his animations are created by hand-drawn frames, painting, and 3-D animation.

Some Text-based Art particularly impressed me. This year I focused on Text-based art forms and learned about Ivan Navarro, Alfredo Jaar, Deborah Kass, and Mel Bochner. My post.. click here..

Seeing Art Car by Jeff Koons at the entrance, is possibly something I will remember forever.. .click here..

I am still amused that the image of a hand holding an egg can be a centerpiece of an international exhibition. I’m talking about “Egg” [2016] by Victoria Fu [IN/SITU program]. Well, if Andy Warhol’s Campbell’s Soup Cans can be at MOMA, then why not? Guess I still need a better grasp on Pop-Art. 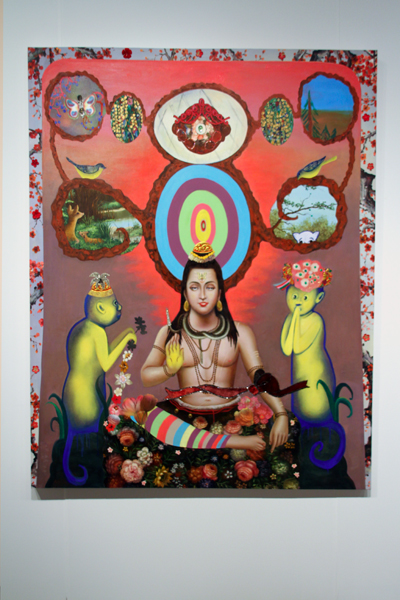 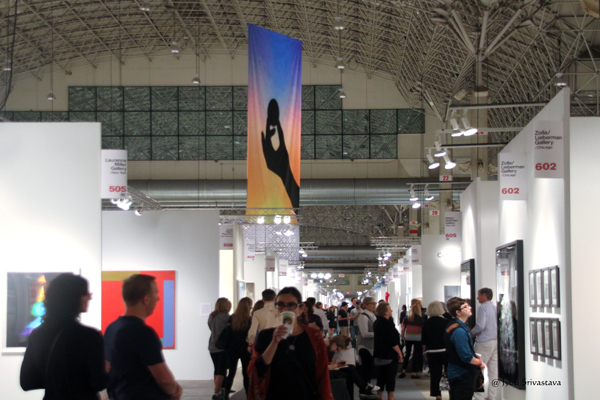 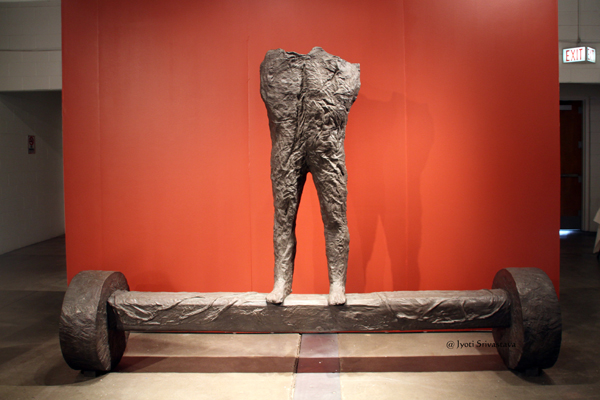 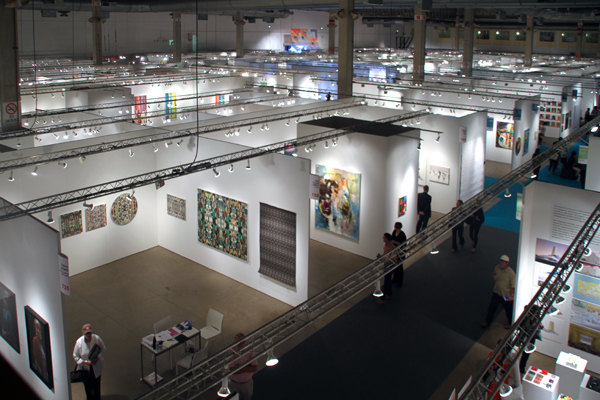 DIALOGUES
Dialogues offer panel discussions, conversations and provocative artistic discourse with leading artists, curators, designers and arts professionals on the current issues that engage them. was presented in partnership with the School of the Art Institute of Chicago (SAIC). It included internationally renowned curator Hans Ulrich Obrist, and artists like Kerry James Marshall, and Iván Navarro.

IN/SITU Outside
Inaugurated in 2014, IN/SITU Outside provides the opportunity for EXPO CHICAGO Exhibitors to present temporary public art installations situated along the Lakefront and throughout Chicago neighborhoods, presented in partnership with the Chicago Park District (CPD) and Department of Cultural Affairs and Special Events (DCASE).

EXPO Video
Presented in partnership with Columbia College Chicago, EXPO VIDEO is located on the main floor of EXPO CHICAGO. The program highlights some of the most exciting video and animation being made by artists represented by EXPO CHICAGO exhibitors. Presented in Navy Pier’s Festival Hall in a variety of screening formats including two large-format screening rooms, as well as several viewing stations designed by Studio Gange Architects.

EXPO Projects
Presented alongside IN/SITU in and around Navy Pier, featuring a curated selection of projects organized by EXPO CHICAGO. The site-specific installation program highlights large-scale and performative works by emerging and established artists represented by 2016 Exhibitors.

OVERRIDE / A Billboard Project
The year 2016 marks the inaugural project – OVERRIDE | A Billboard Project – a citywide public art initiative featuring 15 artists on 28 of Chicago’s digital billboards, providing EXPO CHICAGO a key opportunity beyond Navy Pier to showcase works in neighborhoods throughout the city.

EXPO Editions + Books
Inaugurated in 2014, EXPO Editions + Books showcases a cross-section of artist books, editions, prints, and more. From limited edition collectibles to zines and pocketbooks, the booths will offer a diverse array of print media and cultures that span across photography, collage, drawing, printmaking, art monographs, and creative writing.

CURATORIAL FORUM
The Curatorial Forum is designed to provide leading curators from national and international institutions with a unique networking opportunity at EXPO CHICAGO, the International Exposition of Contemporary and Modern Art. Attendees will have exclusive access to the exposition on opening day, as well as throughout its run, collection visits, studio visits and many VIP events. The Forum allows the curators to discuss current and upcoming exhibitions with colleagues, dealers and attending artists, acting as a catalyst for future collaborative programming within their own institutions as well as with EXPO CHICAGO.

EXPO ART WEEK (September 19–25, 2016)..
With EXPO CHICAGO as the centerpiece, EXPO ART WEEK is presented in conjunction with Choose Chicago, the city’s tourism and marketing organization, and Chicago’s Department of Cultural Affairs and Special Events (DCASE). This citywide celebration of arts and culture features an unprecedented number of institutional alignments and highlighted special events by the city’s most prestigious museums, non-profit organizations, and galleries, making the city a must-visit destination on the international arts calendar.

ART AFTER HOURS
Art After Hours is a citywide open gallery night, inviting international visitors and the Chicago community to experience the city’s vibrant art scene. Featuring alternative exhibition venues and performance spaces, galleries participating in Art After Hours are open during extended hours on Friday, September 23 from 6:00–9:00pm. Art After Hours is a core program of EXPO ART WEEK, September 19–25, 2016.

THE SEEN
The SEEN is Chicago’s International Journal of Contemporary and Modern Art. Its first edition was launched at the 2015 exposition.