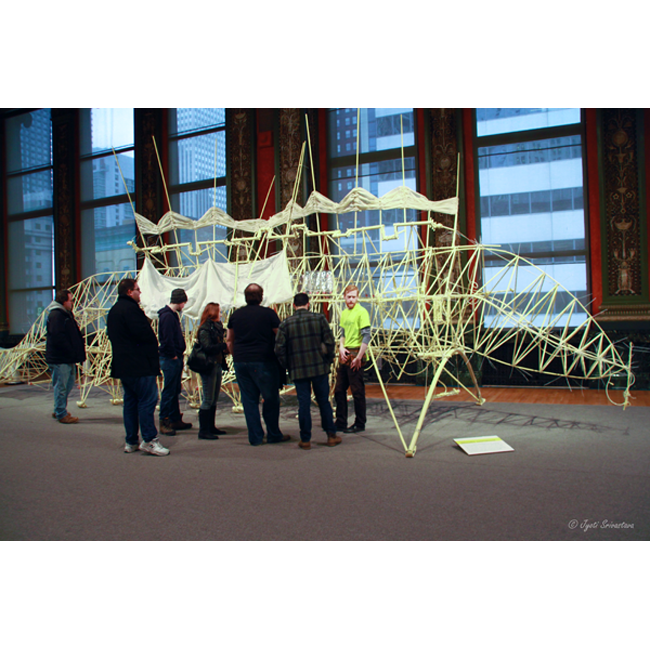 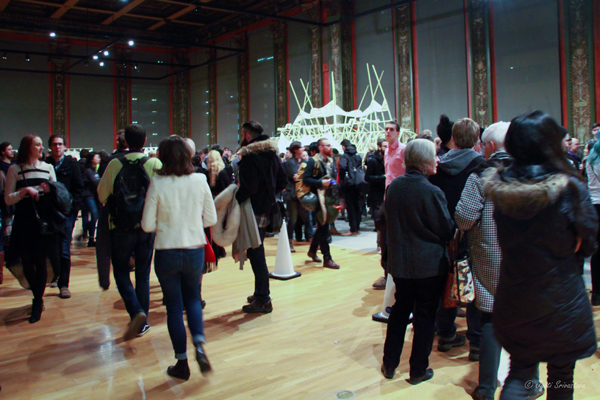 Friday, February 5, 2016, was the preview of the much anticipated  exhibition, “Strandbeest: The Dream Machines of Theo Jansen”. [Strandbeest is Dutch meaning beach animals / strand=beach; beests=beasts]. The opening reception was like never seen before.  People came out in droves to welcome the Strandbeests that have found a temporary new habitat at the Cultural Center. The exhibition rooms – Sidney Yates Gallery and Exhibit Hall – were chock-a-block full with curious visitors. They clapped and cheered as the gigantic kinetic centipede-like creatures took a stroll down the floor of the Sidney Yates Gallery! The artist Theo Jansen was extremely approachable and personable!  That added to the upbeat mood of the public! It was electric! The most well attended opening ever at the Chicago Cultural Center! 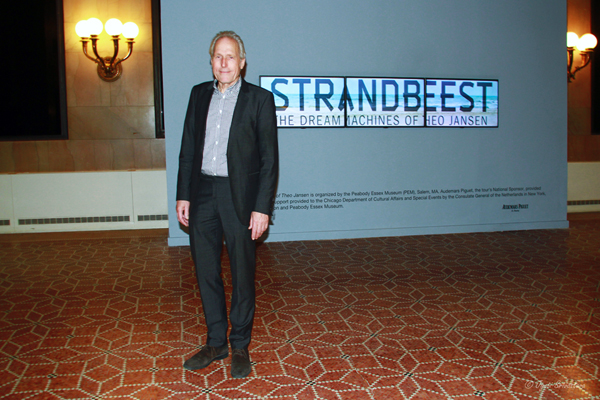 The “Strandbeests,” or beach beasts, are designed to stay on the beach and live off the sun and the sea breeze. The goal is survival. Jansen constantly works on improving his creations so they adapt to their sandy beach environment.

Jansen creates these Strandbeest from inexpensive, lightweight, widely available PVC tubes. He calls them “artistic proteins”. These are intricately assembled with plastic bottles and wing-like sails, to create various organs of the beest. The beest sport legs, which “prove to be more efficient on sand than wheels.. They don’t need to touch every inch of the ground along the way, as a wheel has to”. They have arms to toss sand in the air. The beest have stomach made of recycled plastic bottles containing air, that can be pumped up to a high pressure by the wind. The beest have nose-feelers that are able to detect wet sand towards the sea, and walk away from it. The nose-feelers can also sense an approaching storm and anchor itself to the earth. The more evolved beests have sweat-glands, so the water is distributed through the beest’s joints and sand won’t jam them. So, Jansen’s experiments have equipped the beests with sensing mechanisms. The creatures can detect water, rising-tide, and storm, and avoid these obstacles to survive.

Over time these skeletons have become increasingly better at surviving the elements such as storm and water and eventually I want to put these animals out in herds on the beaches, so they live their own lives.
– Theo Jansen. 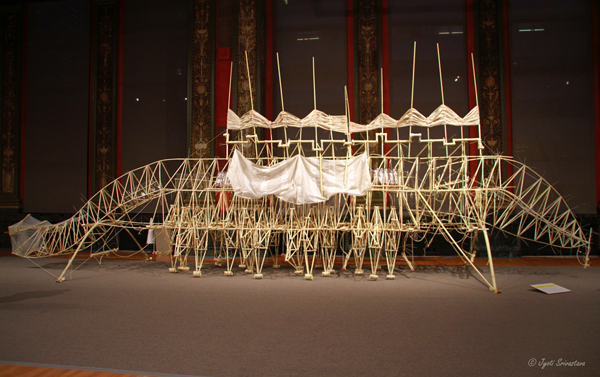 Jansen talks about Strandbeest going through evolutionary stages, and how much they have changed over the years to better apart to their environment.  First they have learned to walk, and now they have sensing-mechanisms to keep safe from dangers. Once their life is over, they become “extinct” and become part of “fossils”.

The best way to understand the evolutionary process of Strandbeest is to observe them first hand. The meticulously curated exhibition provides that opportunity! One can observe the different stages of evolution of Strandbeest “Animaris Suspendiss” – the biggest, most complex, and most evolved beest in the exhibition – on display in the Sidney Yates Gallery. It has with best survival skills. It can change direction to avoid incoming tide. The sails on its back are designed to pump air into wind stomachs allowing the beest to move when wind drops.

Animaris Ordis [2006-Present]: The walking unit that drives almost every beest, is very versatile. It can move on its own if the wind is strong enough. Sails help out when the wind is less robust. People can see Ordis in motion by pushing or pulling it. Suspendisse inherits these legs. Video below..

Animaris Apodiacula [2012-13]: Although it can no longer move, it represents an important moment in strandbeest evolution. Its outrigger skis adds stability and prevent toppling, allowing beest to grow larger. Suspendisse inherited these skis. 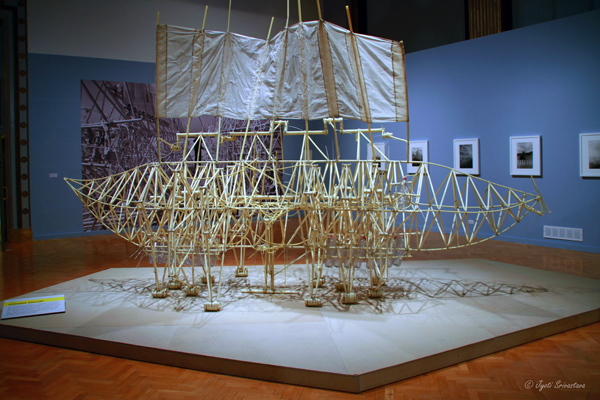 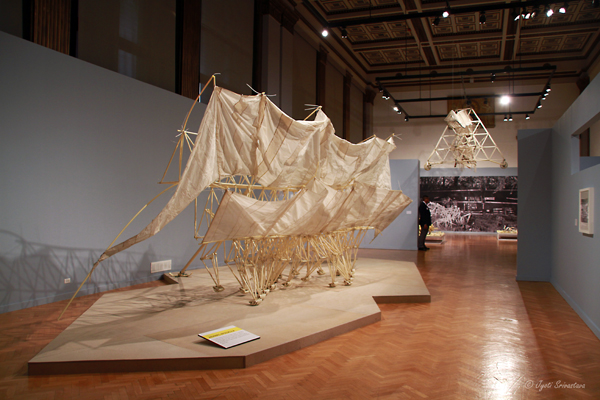 Strandbeest Survival / Reproduction: Jansen has stated that his goal is the survival of the beests.
The biggest question is what happens to Stranbeest when he is no longer able to make them?
Jansen has the answer..
What are they going to do after I am gone? I have all the confidence they will surprise me even in my grave. I have published all the secrets of the beest on the Internet. Since then thousands of students in the whole world are making Strandbeests. These students have the idea they are having a good time. But, in fact, they are abused by the Strandbeest for their reproduction. So, Strandbeests use students to get more Strandbeests. And, so, in all corners of the world you see small Strandbeests surviving in students rooms and on book shelves.
Theo Jansen.

So the Strandbeest will keep evolving with the help of students and Internet! 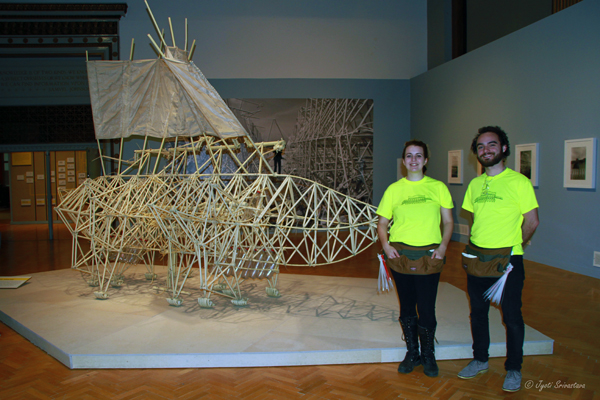 One of the highlights of the exhibition is the presence of handlers aptly nicknamed “Beest Wrangler”.  They tend to the creatures, provide daily demonstrations of their animation, and answer all kinds of questions of curious visitors.  And people had a lot of questions: How many parts do they have? How much do they weigh? How do they face the elements of nature? The Beest Wranglers were answering these questions with the knowledge and demeanor of skilled professionals!  I talked to a few of them and learned that they have been trained by Theo Jansen himself for about two weeks, just before the exhibition opened. 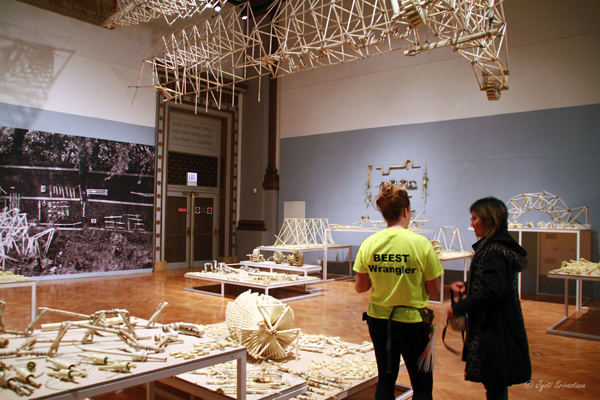 Hall of the Fossils: a roughly demarcated area in the Exhibit Hall attracted a lot of visitors. 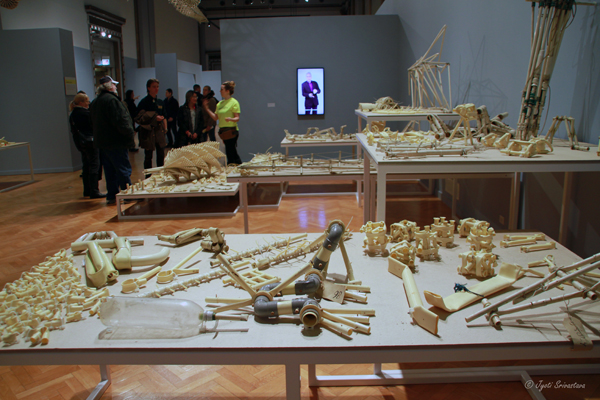 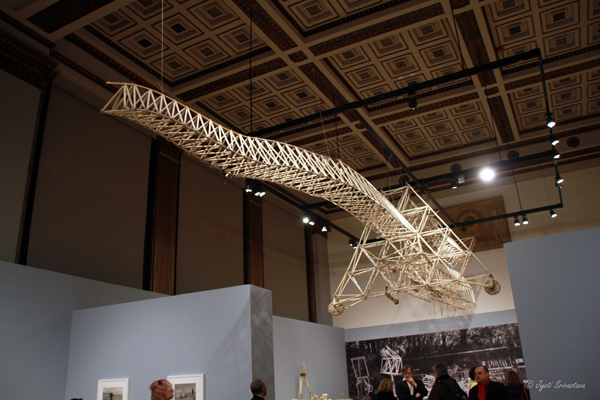 Suspended from the ceiling, in the Hall of Fossils is Animaris Excelsus [2006]. This Strandbeest is now a fossil and it can no longer move. When it was alive, it could exert tyhe force of hundred times its weight. The wheel mechanism is an evolutionary feature of this beest.

DAILY DEMONSTRATION: Another very popular feature of the exhibition is daily walking demonstration of A.Segundus and A.Suspendisse. The video below shows the performance of Animaris Umerus Segundus. The wind stomach in this beest are located in its “shoulder”. This system was too unstable to perform successfully on the beach. But it survives well in the clam conditions of the museum. Check out the timing for daily demonstration here..click here..
the video below shows Animalis Segundus taking a stroll in the Sidney Yates Gallery.. 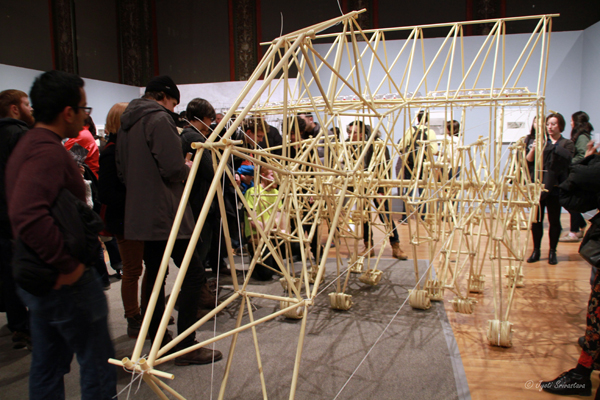 Animaris Segundus – Soon after the live demonstration, visitors flocked to have a closer look.

SOME MORE IMAGES FROM THE EXHIBITION: 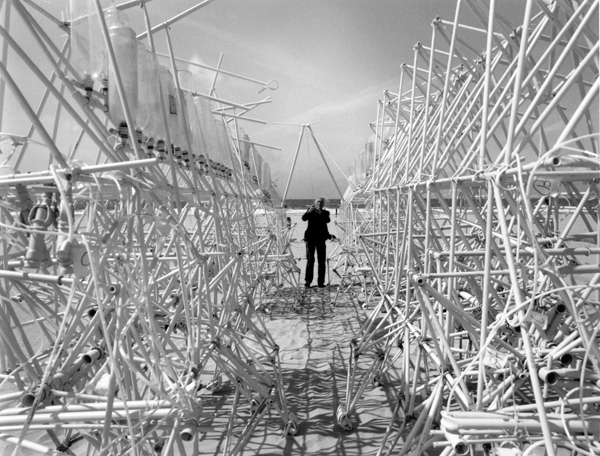 The Strandbeest photographs by Lena Herzog

Theo Jansen [2011], Scheveningen beach, The Netherlands. Photo by Lena Herzog. In fact she created all the photographs in the exhibition. She has documented Theo’s relationship with the Strandbeests and their evolution. 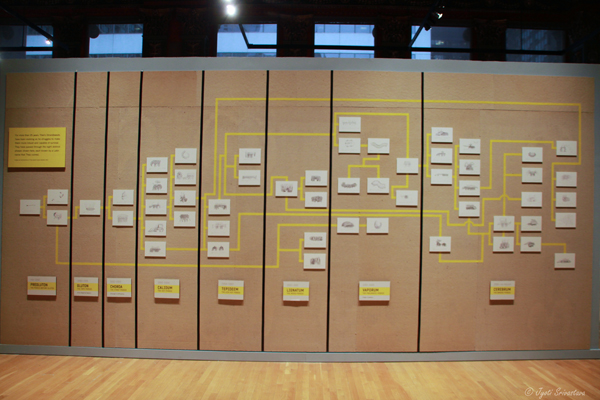 The Evolution of Strandbeests 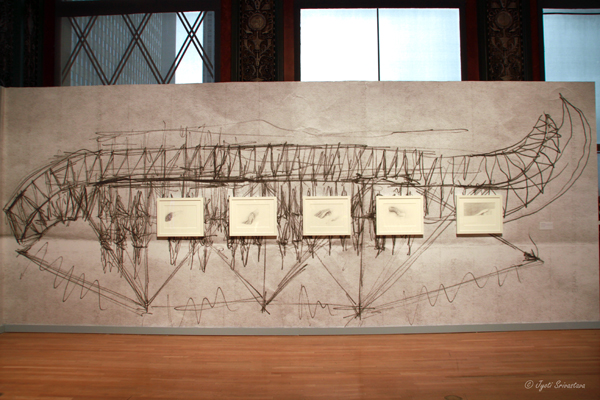 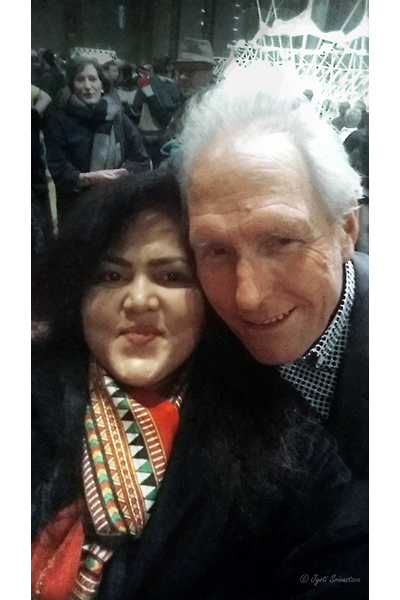 Here is my suggestion to anyone browsing through this post..
Even if you are not into art, even if you are not into science, go see this exhibition! This is about human creativity and hard work with unwavering passion! This is about countless experimentations, countless failures, the determination to never give up, the willingness to learn from the mistakes, and keep improving and evolving! This is about dedication to make something that survives the creator’s own life! An exhibition like this is once in a lifetime experience. Even when it is gone, the experience of seeing it will remain with you forever! And probably inspire you forever! So go see it!

Thank You Theo Jansen for Strandbeests!
Thank You DCASE for bringing this exhibition to Chicago! 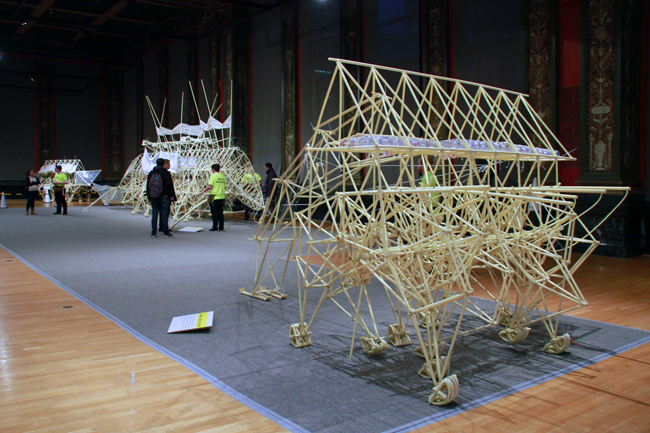