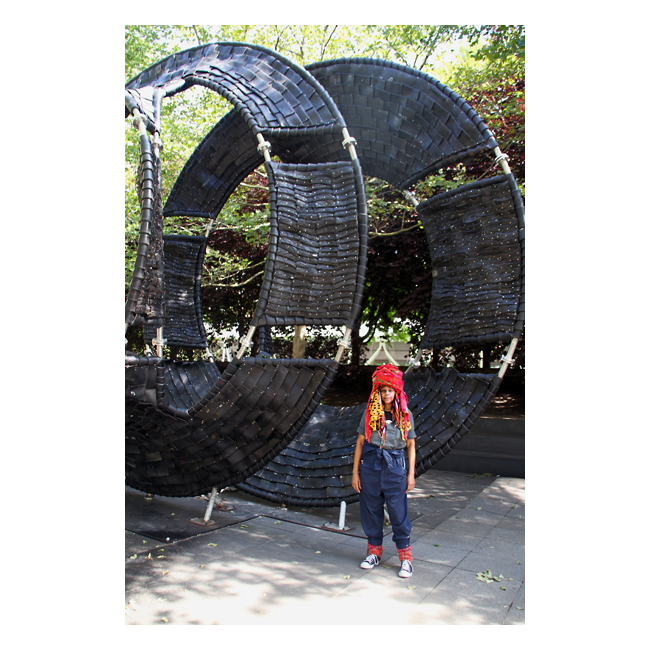 This is the sixth Rotating Large Scale Sculptural Exhibition at Boeing Gallery.

Chakaia Booker is the first African American artist to be showcased in the Boeing Galleries. 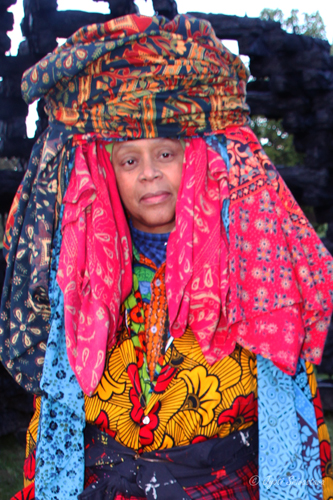 Chakaia Booker is instantly recognized with her signature headdress. Her art career began in the 1980s with making wearable art. It was partly a result of family influences, and partly a way of resolving the issue of having long arms. The garments had to be deconstructed and reshaped to fit the needs. “The wearable garment sculpture was about getting energy and feeling from a desired design.” From early on she started used discarded materials – broken plates, wood, metals and household objects – to make sculptures. She also took a few classes in weaving. The strong influence of garment-stitching and basket-weaving can be easily seen in her sculptures.

Booker began working with rubber tires in the early 1990s and presently continues to work in this medium. The various tread patterns, colors, and widths of the tires possess create a palette for Booker similar to the palette of painter.  The tire also represents her socio-economic concerns of working class, factory labor in the industrial environment – the emotional and physical scarring of people. The black tires symbolize the strength of African American identity.

“My intention is to translate materials into imagery that will stimulate people to consider themselves as part of the environment. Art should be dialogue with viewers.”
– Chakaia Booker.

Chakaia Booker was born in Newark, New Jersey in 1953. She received her BA in Sociology from Rutgers University (New Brunswick, New Jersey), and her MFA from the City College of New York. Based in NYC, Booker maintains a studio in a former commercial laundry in Allentown, Pennsylvania. She has received numerous awards and fellowships including a Guggenheim Fellowship for Creative Arts in 2005. Featured in the Whitney Biennial, her work has been featured in numerous solo and group shows around the world and is in the permanent collection at the Metropolitan Museum of Art and the Studio Museum in Harlem among many others. 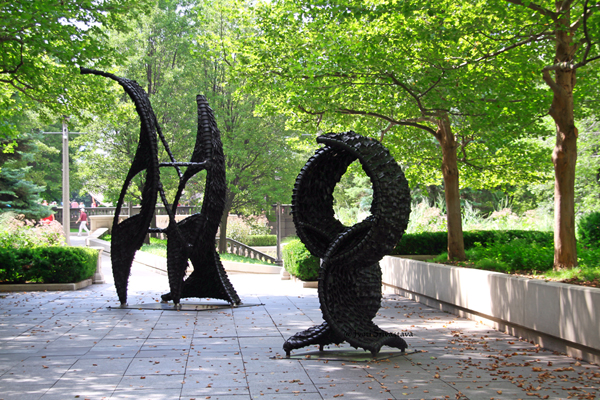 The Millennium Park Boeing Galleries have been venue for series of rotating exhibitions of world-class Contemporary Art by living artists. The 2016 exhibition includes the works by Chakaia Booker:

“I’m excited to be exhibiting my work in Chicago, at this scale and in the magnificent Millennium Park. My sculptures will act as sentinels for the Park, welcoming visitors to stop and enjoy nature and the arts.”
-Chakaia Booker. 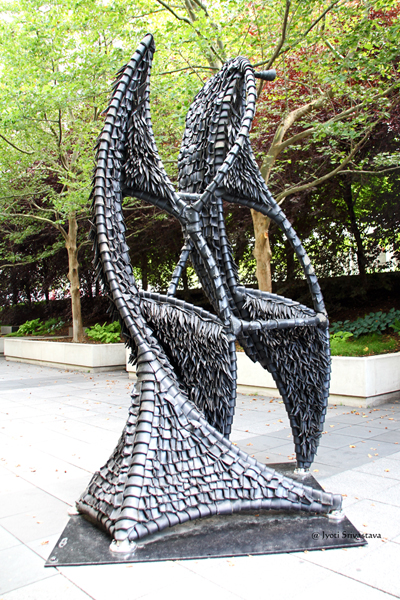 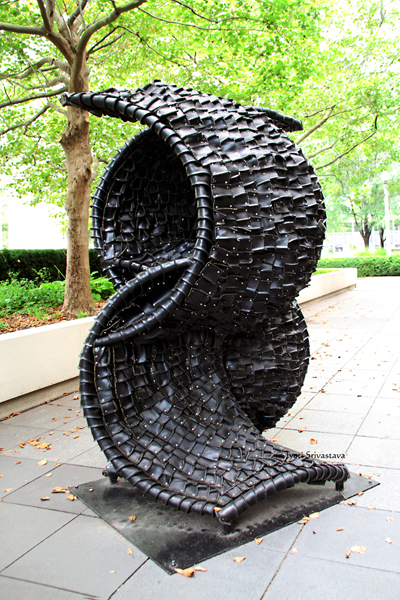 One Way – by Chakaia Booker 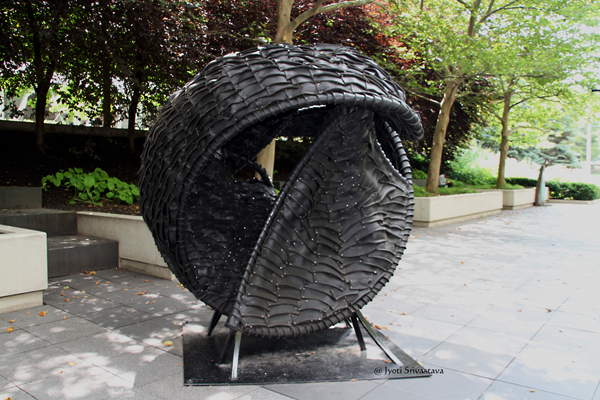 Pass the Buck – by Chakaia Booker 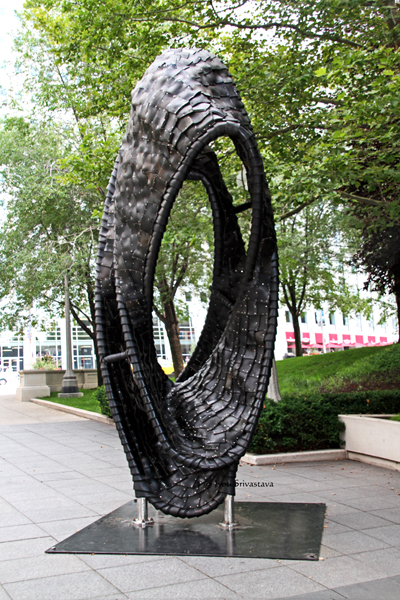 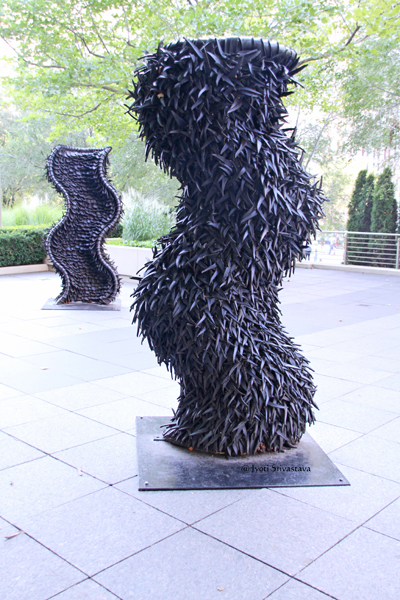 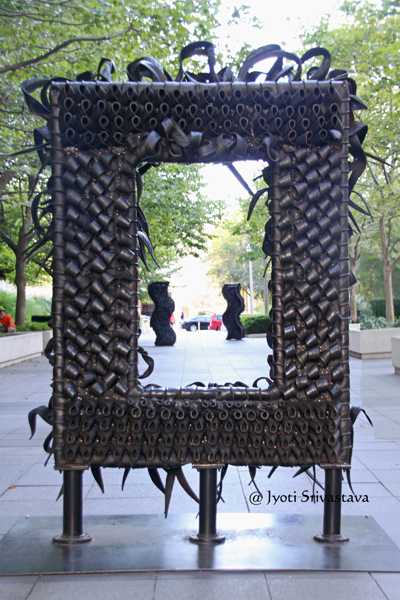 Take Out – by Chakaia Booker 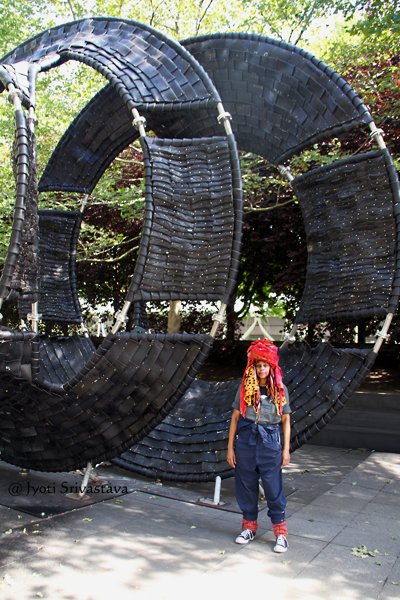 The Millennium Park exhibition marks the third exhibition by Chakaia Booker in Chicago.
Others are:
“Brick House” at Bloomingdale Trail at Damen.. click here.., and
Solo exhibition “Don’t Tread on Me” at Nathan Manilow Sculpture Park… click here.. 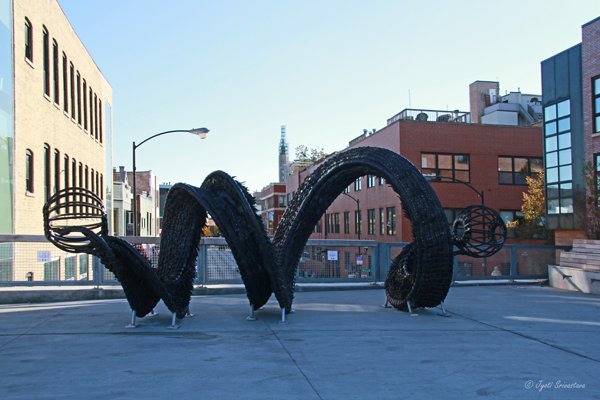 Brick House is the first in the series of temporary installations at Bloomingdale Trail, also known as 606.The piece was selected through an invitational process guided by a partnership between the Trust for Public Land, the Chicago Park District [CPD], and Chicago Department of Cultural Affairs and Special Events [DCASE]. For more.. click here.. 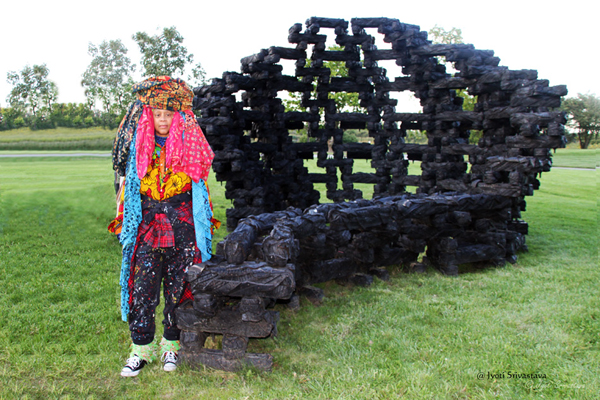 The Nathan Manilow Sculpture Park at Governors State University presents Solo Exhibition Series which brings exceptional artwork by nationally and internationally recognized artists to the park. In 2014, Chakaia Booker’s “Dont Tread on Me” was launched at the park. It consists of three outdoor pieces: Serendipity [1998], Meeting Ends [2005] and What’s Not [2009]. For more, click here..