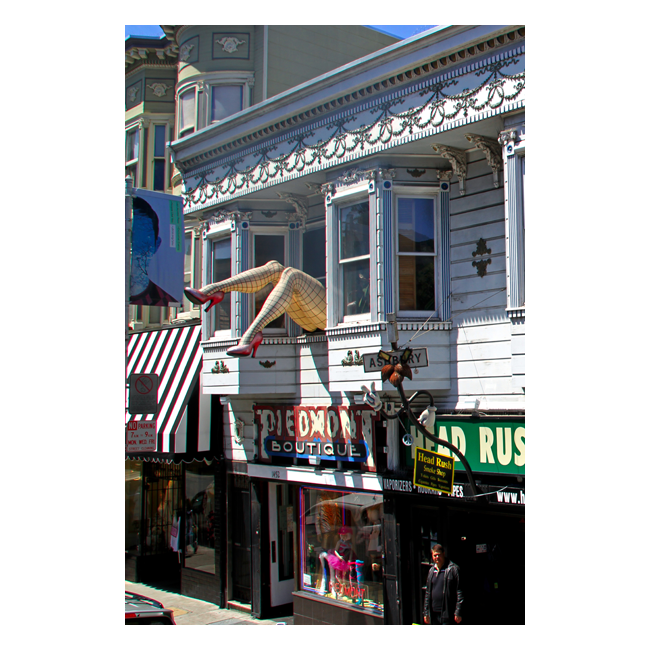 Haight-Ashbury is a district of San Francisco, California, named for the intersection of Haight and Ashbury streets.

It is also called The Haight and The Upper Haight.

The neighborhood is known for its history of, and being the origin of hippie counterculture. 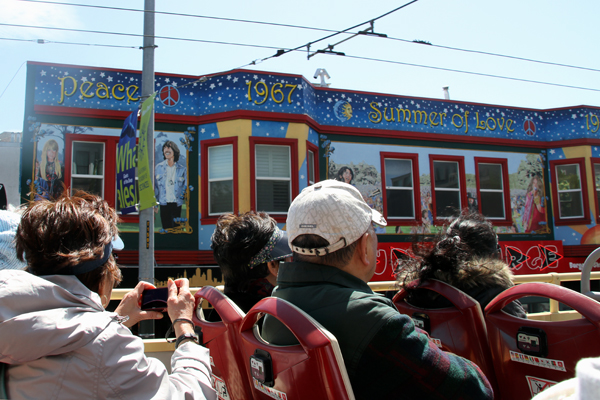 In the very beginning I have to clarify that I saw the Haight-Ashbury district from the bus. I never got down from the bus. It was a San Francisco City Sightseeing Hop On Hop Off Tours. But the moment we entered the district I could feel the vibe of something different. 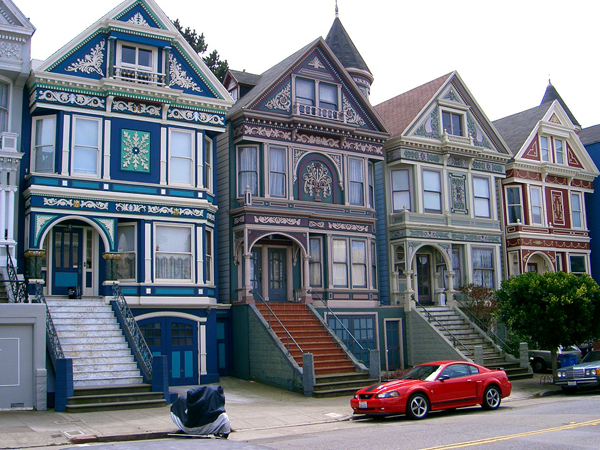 In American architecture, painted ladies are Victorian and Edwardian houses and buildings painted in three or more colors that embellish or enhance their architectural details. About 48,000 houses in the Victorian and Edwardian styles were built in San Francisco between 1849 and 1915,  and many were painted in bright colors.  The change from Victorian to Edwardian occured on the death of Queen Victoria in 1901.   While many of the mansions  were destroyed by the 1906 San Francisco earthquake, thousands of the mass-produced, more modest houses survived in the western and southern neighborhoods of the city.  The Painted Ladies are also known as “Postcard Rows” or “Seven Sisters”—referring to the six or seven houses along the row.

The Painted Ladies are symbolic of the  California Gold Rush (1848–1855) . After all that new money came in, San Francisco wanted to show it off via grand, opulent houses. The designs leaned toward the Queen Anne style—fancy, flashy combinations of bay windows, turrets, and decorated rooflines.  These Queen Anne-style homes are one of the thousands built in San Francisco during its booming growth at the end of the 19th-century. Their brightly colored edifices have become a pop culture staple, and are one of the most well-recognized examples of California Victorian architecture.

The term “Painted Ladies” isn’t even special to San Francisco.  There are other ones in Baltimore, St. Louis, Cincinnati, Toledo, Ohio and the city of Cape May, New Jersey. 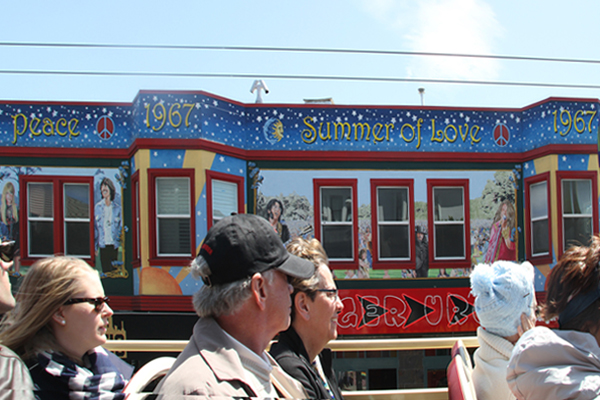 The Summer of Love was a social phenomenon that occurred during the summer of 1967, when as many as 100,000 people, mostly young people sporting hippie fashions of dress and behavior, converged in San Francisco’s neighborhood Haight-Ashbury.  Hippies, sometimes called “Flower Children”, were an eclectic group. The Haight-Ashbury neighborhood was the epicenter for counterculture musicians such as the Grateful Dead, Janis Joplin, Crosby Stills and Nash plus the Jefferson Airplane.

Some words closely associated with Haight-Ashbury disrict: Hippie, Counterculture, Flower Child, Psychedelic Rock, and of course 1967 Summer of Love.  The 1960’s hippie counter culture movement involved a variety of social concerns and beliefs. Hippies rejected established institutions, calling them “The Establishment”, “Big Brother”, and “The Man”. Hippies believed in replacing the dominant mainstream culture with a Utopian society. They were opposed nuclear weapons and the Vietnam War. They embraced aspects of eastern philosophy and sought to find new meaning in life.  A few were interested in politics; others were concerned more with art [music, painting, poetry] or religious and meditative practices.  Hippies created their own counter culture founded on psychedelic rock and the embracement of the sexual revolution. Drugs such as marijuana and LSD were tightly integrated into their culture as a means to explore altered states of consciousness. Hippie dress, which they believed was part of the statement of who you were, included brightly colored, ragged clothes, tie-dyed t-shirts, beads, sandals, or barefoot, and jewelry. For more, read this wonderful article by Bhaddock “The Hippie Counter Culture Movement (1960’s)” .. click here..

Although hippies also gathered in many other places in the U.S., Canada and Europe, San Francisco was at that time the most publicized location for hippie fashions. 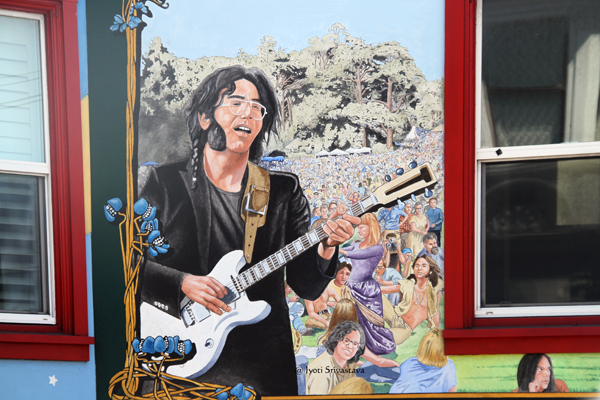 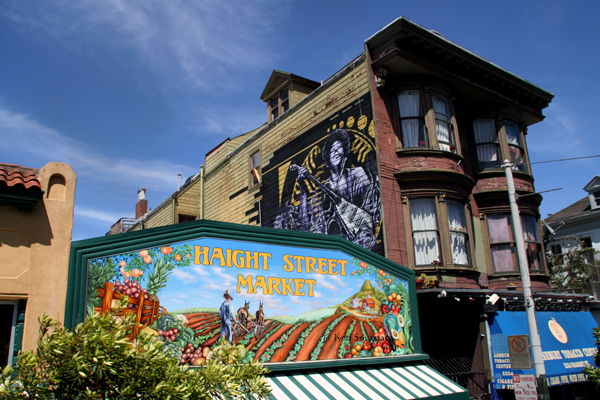 Muralist Amanda Lynn painted this flowerchild tribute to that era on the side of Jimi Hendrix’s former house, Red House”. It is appropriately called “Summerlove.” 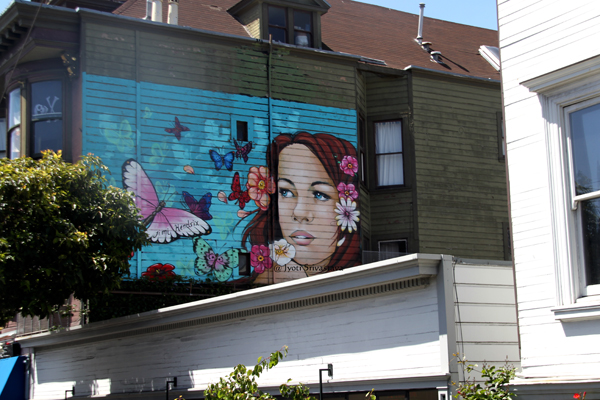 Relive San Francisco’s Summer of Love in the Haight-Ashbury District – by Matt Villano.. click here..
A small number of new businesses have set out to carry the hippie torch. Jammin’ on Haight, for instance, a fashion boutique on the corner of Haight and Masonic streets, specializes in tie-dye and creates all of the designs in-house. The Herb’n Inn, a bed and breakfast, houses the Psychedelic History Museum that comprises the owner’s collection of 1960s-era posters and paraphernalia. These establishments, along with many vintage and costume shops and art galleries, retain a healthy dose of 1960s creativity in the Haight-Ashbury neighborhood. Although the Summer of Love is long gone, on a short visit with the right itinerary, you can experience a glimpse of how it was, if only for a few hours. 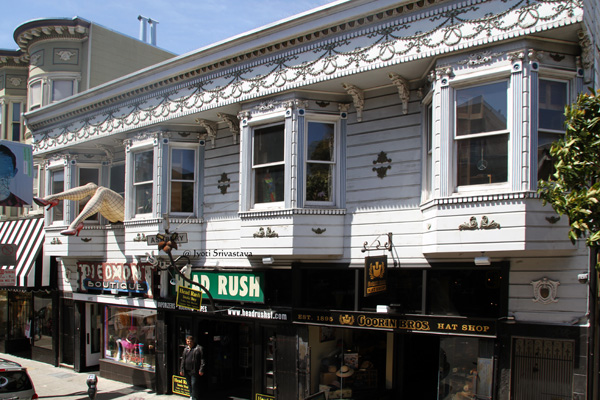 I wonder why this  famous – mannequin legs in fishnet stockings and red stiletto heels – has not got been nicknamed yet??? 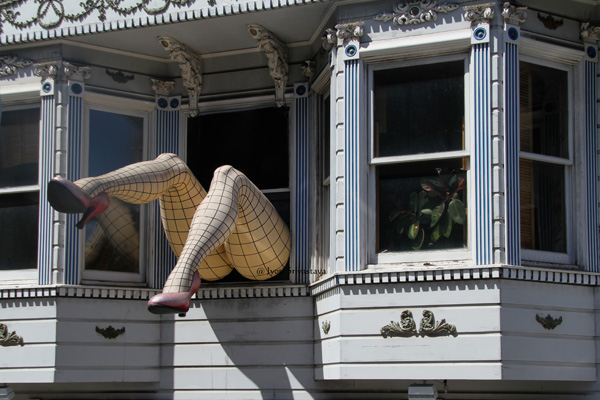 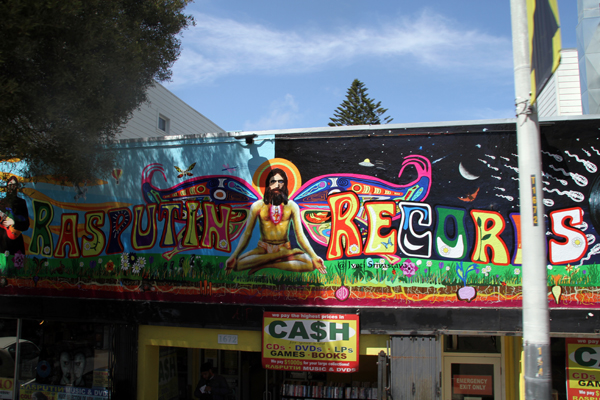 Another outstanding feature of the Haight Ashbury district is the preponderance of colorful mural art. 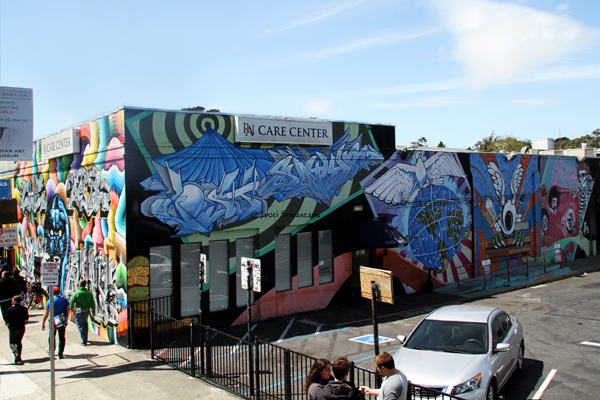 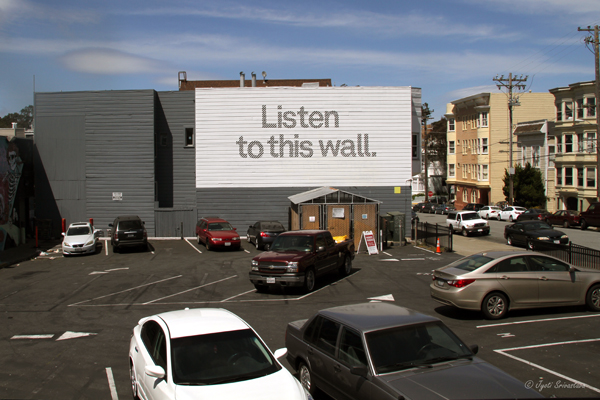