2015: This Fall Take a Walking Tour of the Museum Campus Sculpture Park 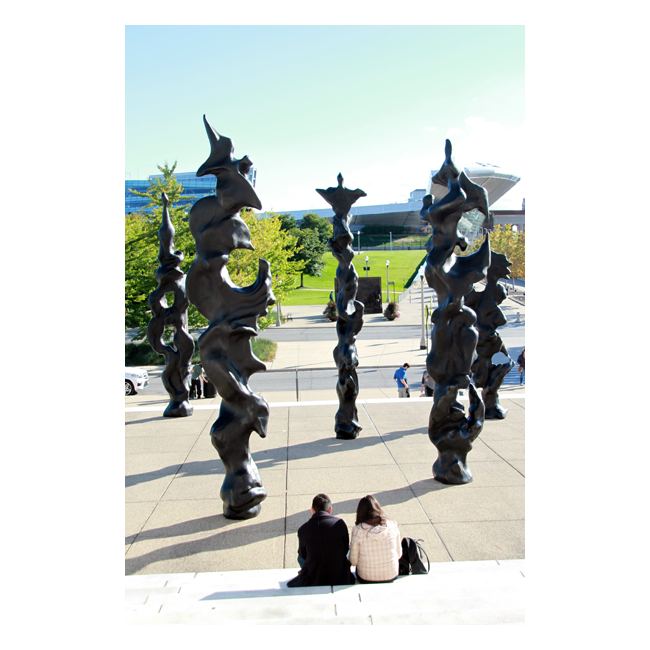 With the latest installation of “Spirit Totems” by Herb Alpert in the Field Museum south plaza, the Museum Campus is now a veritable outdoor sculpture park! By the autumn of 2015, when all temporary art installations for the year are complete, the museum campus has  become a actual museum without walls. Works by nationally and internationally reputed artists can now be spotted scattered in the grounds of the museum campus! There is works by Ai Weiwei, Henry Moore and Bertel Thorvaldsen alongside with Norman Tait’s Totem pole and lifesize skeleton of Brachiosaurus! All this in the most beautiful backdrop possible: the magnificent Chicago skyline and the blue-green clear waters of Lake Michigan! 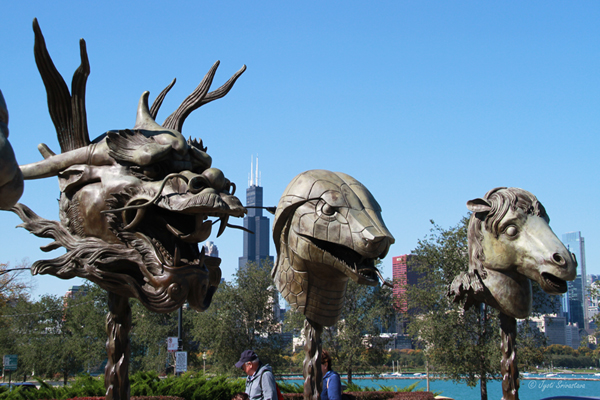 Chicago museum campus was created after a reconfiguration of Lake Shore Drive in 1998. It is  a 57-acre area surrounding three of the city’s most notable museums,  the Adler Planetarium, the Shedd Aquarium and the Field Museum of Natural History.  It also includes Soldier Field football stadium, as well as the Northerly Island.

The Museum Campus already had a rich collection of permanent art installation. In the past two years, temporary installations have added diversity and richness to this cherished art collection.

The temporary installation have been made possible by few organizations and programs:
Art in Action, Chicago: A collaboration between Chicago Park District [CPD] and Chicago Department of Cultural Affairs and Special Events [DCASE]. It brought “Nature’s Clock” by Robert Lobe, which was installed last year, and stays there this year at the intersection of McFetridge and Museum drives on the Museum Campus. There are two more installations under “Art in Action” program, but they are further south in Grant Park, but an easy five minutes walk from Museum Campus. These are “Marker # I” & “Marker # II” by Mel Kendrick at Queen’s Landing; and an Untitled bronze abstract sculpture by Christopher Wool in the Buckingham Fountain Plaza.

So this Fall, take a Walking Tour of the Museum Campus Sculpture Park.
It is best to begin the tour from the farthest point the Adler Planetarium. 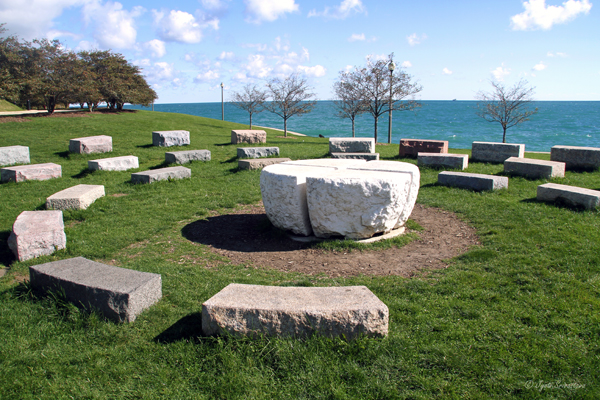 It was founded in 1930 by Chicago businessman and philanthropist, Max Adler,  is the first planetarium built in the western hemisphere.  It has some very interesting sculptures mostly related to the theme of astronomy, exploration and understanding of the Universe.  “America’s Courtyard” by Brazilian artists Denise Milan and Ari Perez is made of stone blocks of various colors and origins celebrating the ethnic diversity of America.  The sculpture is configured  to resemble the spiral shape of the galaxy, and marks the sun’s passage through seasonal equinoxes.  Close-by is another sculpture “Spiral Galaxy, A Work in Progress”,  by Chicago based artist John David Mooney.  There is sundial “Man Enters the Cosmos” by the famous British sculptor Henry Moore.  A functional sundial, it supported by two intersecting bronze semicircles, that mark the time of day by casting a shadow on the ground.  The subtitle – Man Enters the Cosmos – refers to the great expansion of human knowledge of the universe that occurred during the “golden years of astronomy,” 1930 – 80.

Last year, “Circle of Animals/Zodiac Heads: Bronze”,  by Chinese sculptor Ai Weiwei was installed as part 2014 Expo Chicago’s In/Situ outdoor installations. It was brought in collaboration with Chicago Park District [CPD] and the City of Chicago’s Department of Cultural Affairs and Special Events [DCASE].  Ai Weiwei is said to be one of the most important contemporary artists. His Zodiac Heads are recreation of the famous twelve bronze animal heads that once adorned the Old Summer Palace in Beijing, which were looted by Anglo-French troops during the Second Opium War. The heads remain a potent trigger for Chinese nationalist sentiments. Ai Weiwei has been a vocal critic of plundering of China’s cultural heritage. 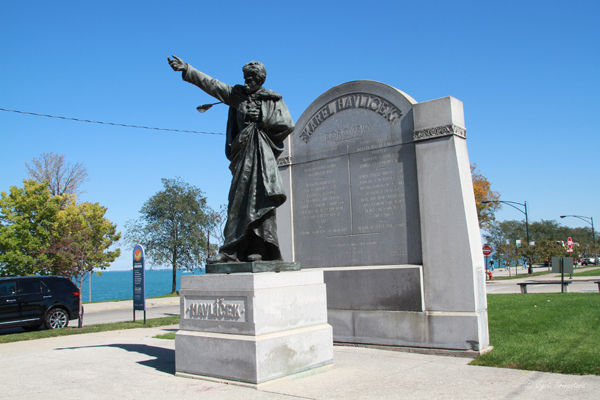 Moving west from Adler Planetarium is the Shedd Aquarium. The road between Adler Planetarium and Shedd Aquarium was named the “Solidarity Drive” in 1998; after reconstruction of 2,800 linear feet of shoreline. Improvements included the construction of step stone revetment. The choice of name “Solidarity Drive” is to commemorate Lech Walesa’s ultimately successful movement to bring freedom to Poland named “Solidarity Movement”. It celebrates Chicago’s large Polish population, which is the largest Polish population outside of Warsaw. 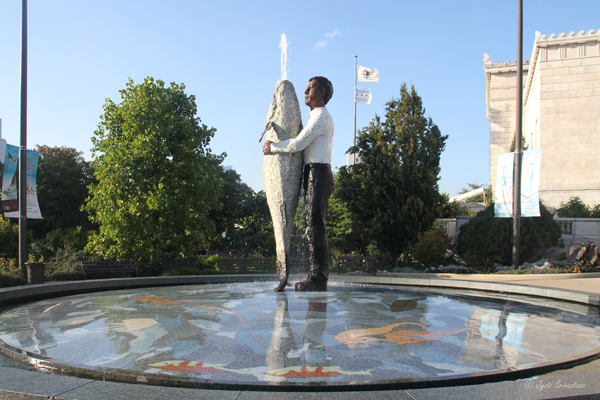 Man with Fish – by Stephan Balkenhol

“Man with Fish” by German artist Stephan Balkenhol, was installed in front of Shedd Aquarium in 2001. It is located southwest side of the aquarium building, The sculpture standing 16 feet tall features a man holding a fish that bubbles water out of its mouth while standing in the middle of a shallow pond. 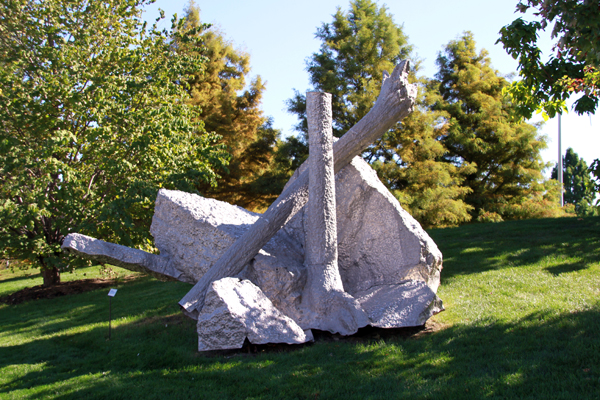 As we move further west, there is Field Museum and Soldier Field. At the intersection of McFetridge and Museum Drive is “Nature’s Clock” by American sculptor Robert Lobe. Lobe uses a variation of the ancient metalworking technique repoussé, in which metal is hammered around an object to obtain shapes and patterns. This is wonderfully explained in this article by Jeremy Hunt of AJJ press click here.. “He encases trees and boulders in malleable aluminum, and with countless mallet strikes and a pneumatic air compressor, he gathers and tools the metal snugly around their shapes. This unique process enhances the textures and shadowy contours of the life-sized sculptures, blurring the line between abstraction and realism.” Nearby are Soldier Field Children’s Garden, and “Tribute to Freedom” by Anna Koh Varilla and Jeffrey Hanson Varilla. 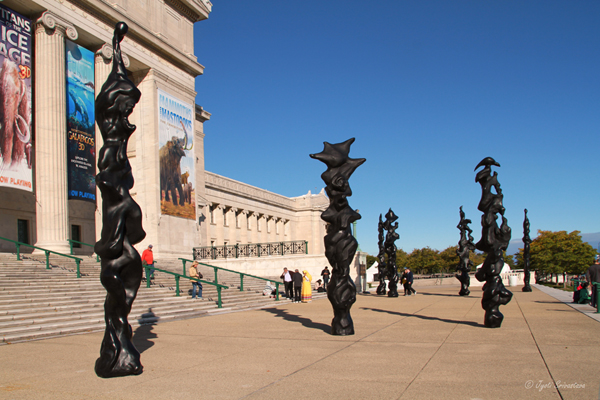 The south plaza of Field Museum has a new installation, Great Art Inspires Great Art by Herb Alpert. These are also called “Spirit Totems”. It includes eight new sculptures: Hope [2008], Lineage [2009] and Grace [2008] Warrior [2011], Gratitude [2011], Inspired [2011], Freedom [2011] and Ancestral Clan [2010]. These sculptures are created by musician and artist Herb Alpert, who was inspired by the work of indigenous artists: a display of towering cedar totem poles he had seen in Vancouver. Starting with same vertical proportions, Alpert “took the work in more abstract directions, and it became more like jazz response.” He eventually produced a series of monumental works – some over 18 feet tall. Although planted firmly on the ground, the pieces reach skyward, emphasizing the spirituality that makes art – and music – universal human language. 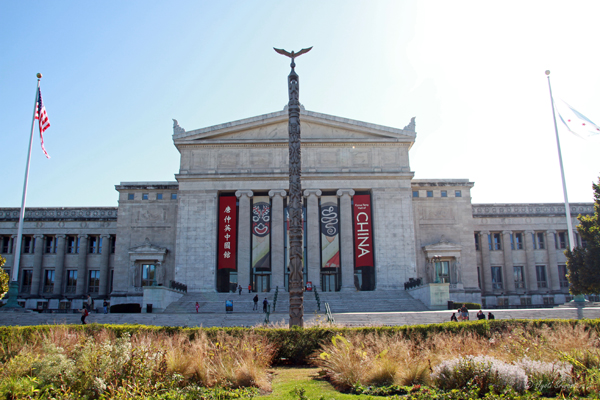 Field Museum north plaza has permanent installation of Norman Tait’s totem “Big Beaver”. It is a contemporary totem pole in the traditional mode, commissioned to commemorate the opening of The Field Museum’s hall of Northwest Coast and Arctic Peoples. The totem tells the legend of Canadian artist Norman Tait’s ancestors of the Nisga’a Tsimshian group and how they came to adopt the beaver as their clan symbol.

Field Museum north plaza also has replica of colossal Olmec Head # 8. The ancient Olmec, one of the first complex societies in the Americas, are remembered for their colossal head sculptures, 17 of which have been recovered to date. Each original head is distinctive and believed to embody the likeness of an individual leader. Though all of the heads were carved in a stylized manner, Olmec Head #8 is considered the most naturalistic. The State of Veracruz, Mexico donated Ignacio Perez Solano’s 1700-pound stone replica to the City of Chicago.

The west plaza of Field Museum has an impressive skeleton of Brachiosaurus. This outdoor skeleton is part of indoor exhibit Evolving Planet, which tells the story of four billion years of life on Earth through interactive displays, videos, and fossils.

North side, has three outdoor sculptures,  as part of Expo Chicago In/Situ installations outside of Navy Pier. These are in partnership with the Chicago Park District [CPD] and Chicago Department of Cultural Affairs and Special Events [DCASE]. 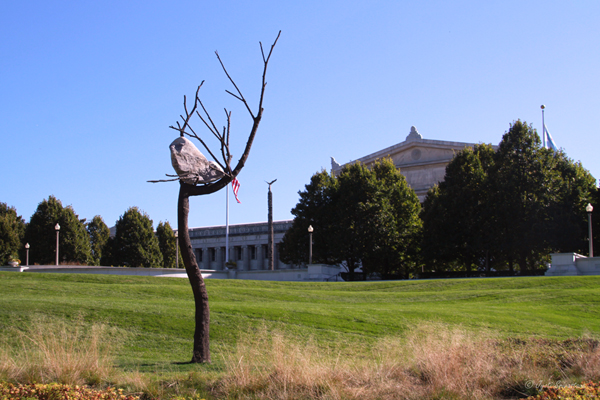 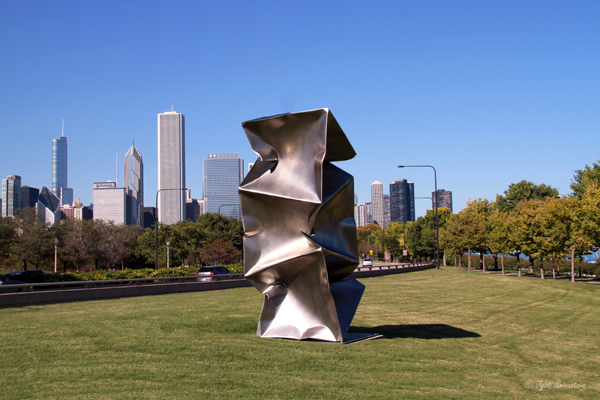 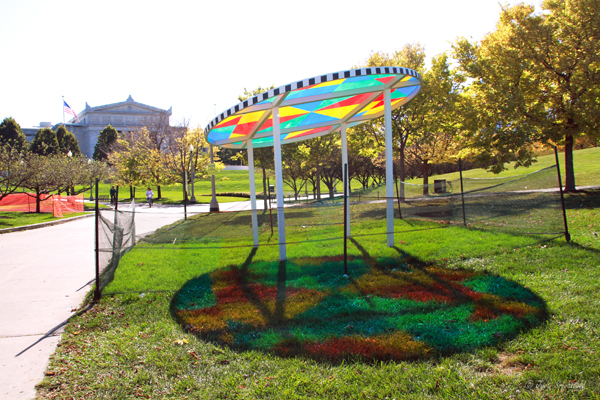 This Fall Take a Walking Tour of the Museum Campus Sculpture Park!