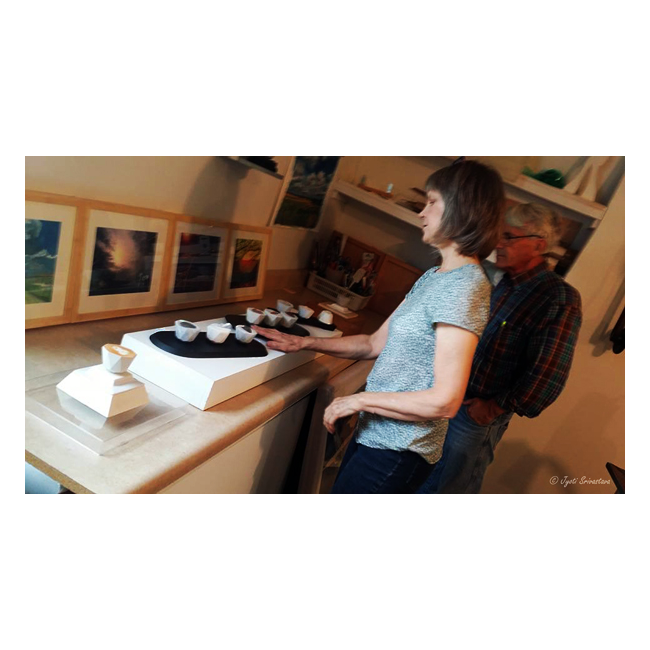 Margaret Lanterman is an artist and an art educator. She received MFA in sculpture from University of Illinois and BFA in painting from Miami University. She also pursued post graduate study in Ethology at Purdue University. She has done extensive research in the field of animal behavior, historical research into philosophies such as animism and the observation of natural world around us.

Her art stems from the interaction between actual nature and human nature and the change that is effected upon each.
My sculptural and two dimensional work are based on observation that important thing seem to occur in the interfaces of life, when two concepts and entities meet.  As cultural creatures we enter this interface when we engage with our natural world.  As we intersect with nature, changes can be subtle but they occur. An experience of the ephemeral aspect of that interface can be appreciated each time we step into or even just view landscape.  Our moment of first sight, of first awareness, touch us in ways that sometimes hard to determine.
– Margaret Lanterman.

I visited Lanterman in her home-studio with Steve Mueller, who is co-founder of Vector Custom Fabricating.. click here.., and a painter click here. Steve along with his wife Debbie Muller own the High Lake Sculpture Garden which focuses on outdoor sculpture by contemporary Chicago and Mid-West sculptors click here.. 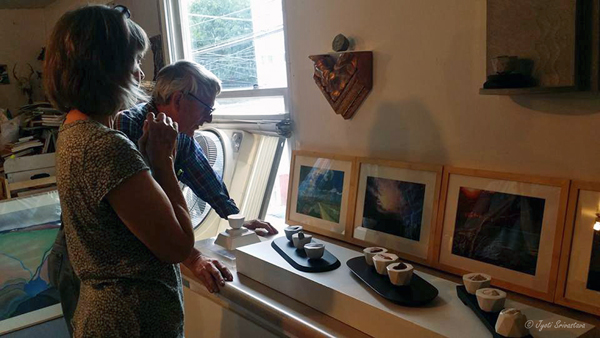 Moments of a Place series – by Margaret Lanterman

MOMENTS OF A PLACE: is a series of small-scale sculptures, which are a collection of her travel memorabilia. We all collect souvenirs on our trips, and after some time they become clutter. Margaret has a unique artistic way for organizing her travel mementos and knickknacks, into small-scale sculptures, where each one encapsulates the complex sensation and impression of the place. In Margaret’s words..
“Moments of a Place series is from my travels, and they represent the fleeting moment when you realize something that is truly significant about a place, the moment that can never really be captured or duplicated.” 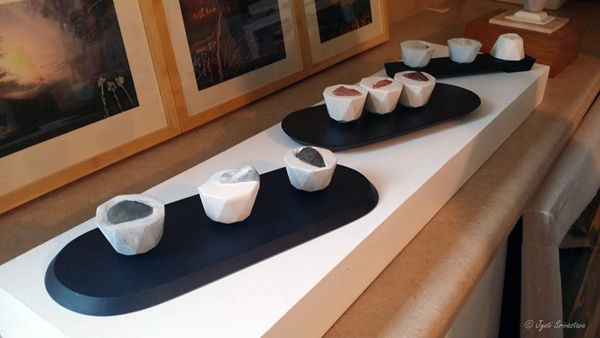 Moments of a Place series – by Margaret Lanterman 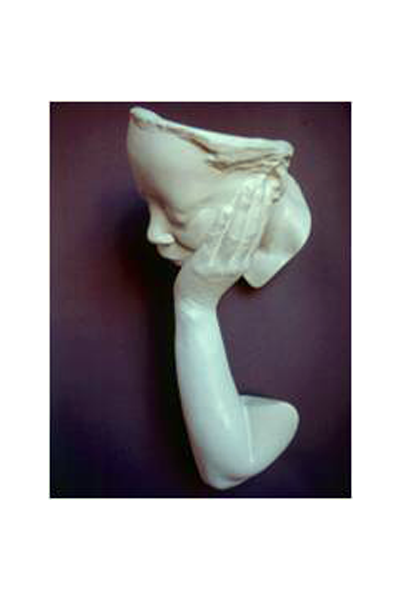 WORKER series: It deals with the dignity and skills of people who still work within traditional cultural positions that involve hand skills. The series includes diverse postures, like a pair of elderly hands resting on open papers of a book, or an expectant mother’s protective hands wrapping a swollen belly, or members of a family holding hands, or the grace in a dancers hand gesture. 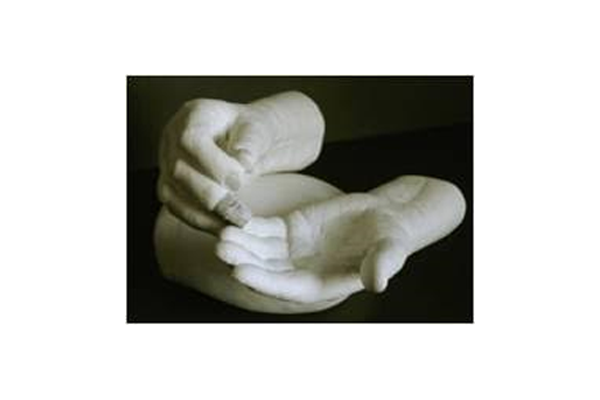 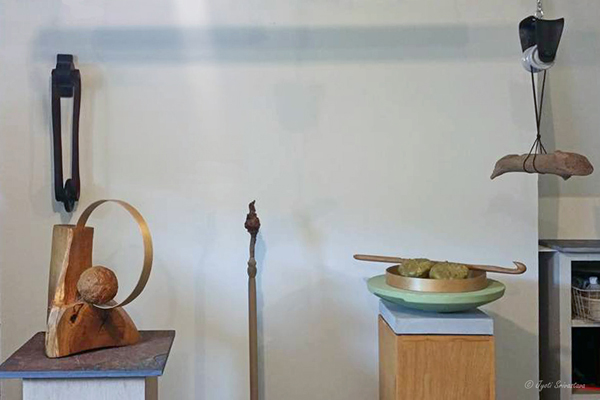 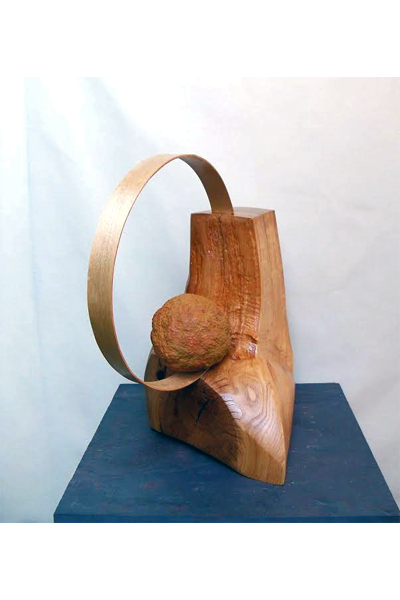 The studio visit gave an opportunity to meet with the artist and understand her vision at a personal level. There were several small-scale sculptures and paintings showing her diversifies interests.

Margaret Lanterman has won some coveted public art commissions and a write up on her in incomplete without mentioning some of her outdoor installations. Some of her public art installations in Chicago includes:
– “Landscape for Four Seasons” at 20th District Police Station, which features a 30-foot mural of Chicago’s natural environment through the seasons. and “Sundial and Staff” at Founder Park, which is a collaborative work with her husband Steve Luecking, a retired professor and a prolific sculptor in his own right.
– “Pioneer Park Staffs” at Founders park, Highland Park, Chicago. She also did landscaping for the park.
– “Birdscape” a permanent installation at the Peabody Forest Preserve in Oakbrook IL. 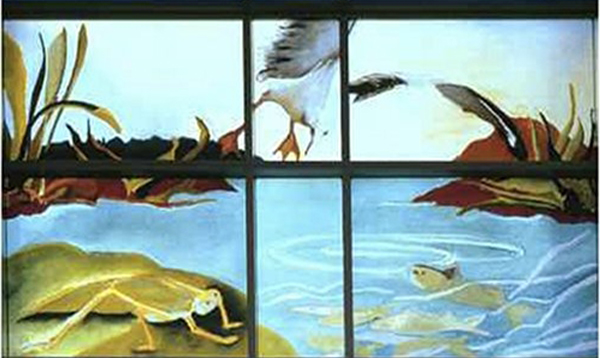 “A Landscape for Four Seasons” is installed at the 20th District Police Station. The inspiration for this came from the artist’s walks through the neighborhoods surrounding the Police Station and conversations with residents of the community. She discovered a wealth of nature and wildlife between the river and the lake, leading to the composition of five works in architectural glass that span the four seasons as experienced in Chicago’s natural environment. While the human figure is not represented, evidence of human activity is present in such details as a canoe, a glimpse of homes, and a picnic, allowing viewers to imagine that they are participating in these activities. 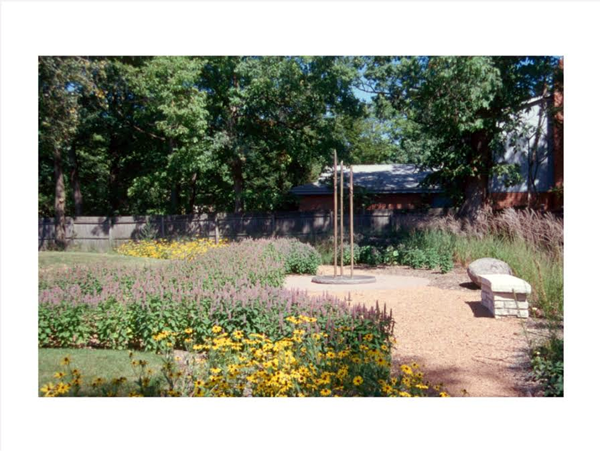 Pioneer Park Staffs – by Margaret Lanterman at Founders Park in Highland Park. The sculpture and landscaping were done by Margaret. Previously it was a flat gravel parking lot for buses. In fact , the staffs are part of collaborative “Sun Wheel and Staffs” between Margaret Lanterman and her husband Steve Luecking. These two sculptures – sunwheel and staffs – allude to the role of travel in the history of the community. Steve Luecking’s “Sun Wheel” calculates time; whereas Lanterman’s walking “Staffs” pay tribute to this ancient trail and the oldest inhabitants of the area. 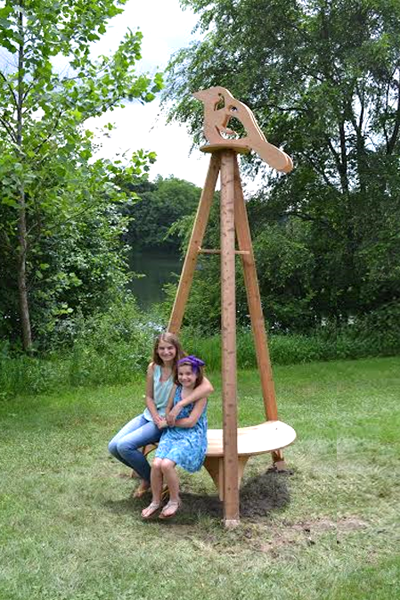 Birdscape – by Margaret Lanterman / Image courtesy of the artist

Birdscape – by Margaret Lanterman is a permanent installation at the Peabody Forest Preserve in Oakbrook IL. This piece includes a feeding station for birds and seating for nature watching and meditation. 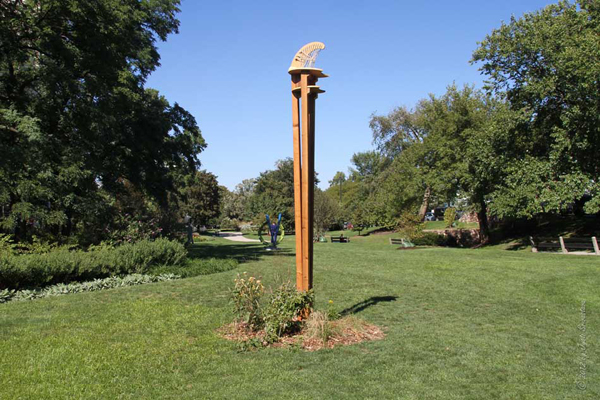 Thank You Margaret for your time and hospitality!
I have a feeling we will be in touch in the coming days.
Best Wishes for your future endeavors.