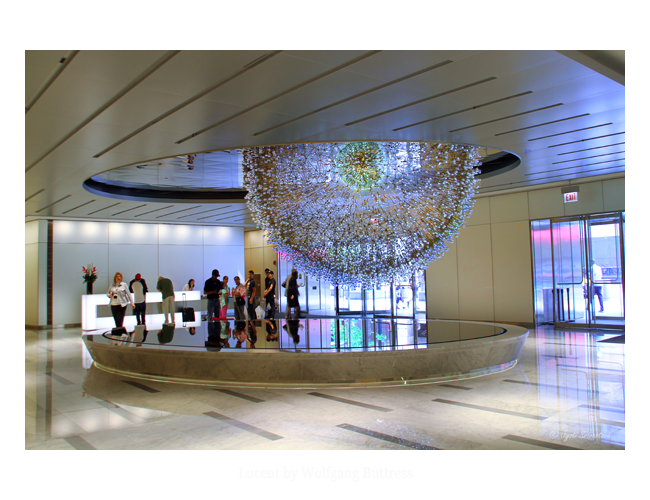 Concept: Lucent accurately map the stars that can be seen in the Northern Hemisphere from earth with naked eye.

Description: Semi-spherical sculpture made of stainless steel, glass and fiber optic wires.
There is a mirrored ceiling above, creating an illusion of a complete sphere,
and a reflective pool below, giving a sense of infinity.

Dimensions: The diameter of inner globe is 3-foot, the stainless steel mesh 14-foot,
and the protruding nodes with glass orbs are 16-foot 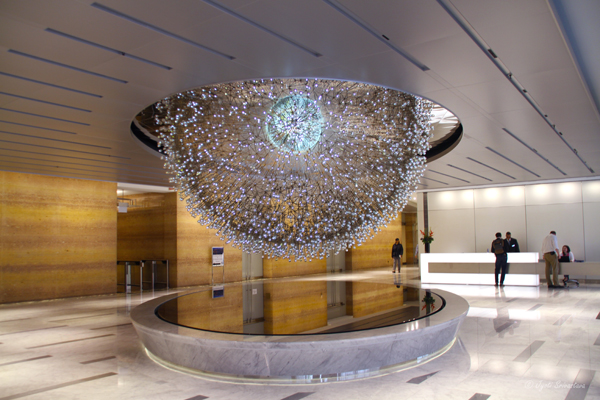 An iconic sculpture for an iconic building!
Lucent, a unique sculptural chandelier, is the centerpiece of the newly renovated Chestnut Street lobby of one of Chicago’s most iconic buildings – the Hancock Center. With the installation of this spectacular sculpture, Hancock Center has established itself as having one of the most outstanding lobbies in Chicago. It is one of those pieces you cannot pass by without noticing. I have seen grown-ups taking a pause, and admiring it with child-like awe and wonderment. Even people walking on the street, who do not need to enter the building, stop by to see this shimmering piece of art! Yes indeed it is that captivating!

Lucent emanates light which pulsate at low frequency creating an illusion of twinkling stars in the night sky. The celestial sensation is actually for a reason. Lucent accurately map the stars that can be seen in the Northern Hemisphere from earth with naked eye. The sculptor Wolfgang Buttress worked with eminent astrophysicist Dr. Daniel Bayliss, from the Australian National University, to create a celestial map, which forms the basis of this sculpture. The stars of the Southern Hemisphere are implied in the reflection in the shallow reflecting pool beneath.

The semi-spherical sculpture is made up of stainless steel, glass and fiber optic wires. It is attached to a mirrored ceiling above, creating the illusion of a whole sphere. Below is polished black granite reflective pool. These reflective surfaces – mirror ceiling above and reflective pool below – create a sense of infinity. The sculpture’s incredibly detailed and complex structure consists of stainless steel lattice supporting hundreds of nodes with fiber optic lighting which pulsate subtly over the day and throughout the seasons.

Dimensions: The diameter of inner globe is 3-foot, the stainless steel mesh 14-foot and the protruding nodes with glass orbs are 16-foot. 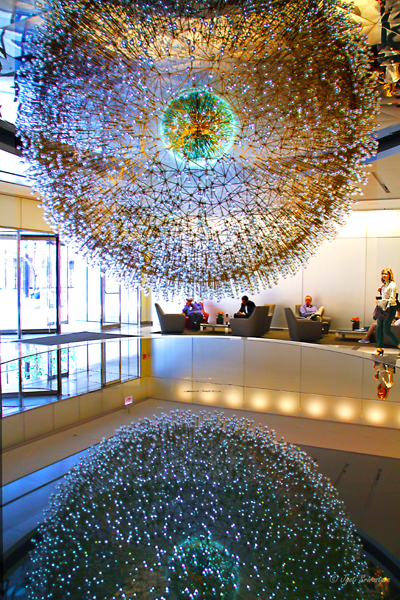 Wolfgang Buttress is an artist from Nottingham, UK. Born in 1965, he studied BA (Hons) Fine Art at Nottingham Trent University. After graduating in 1987, he set up his studio in Nottingham, where he creates his artworks. Some of his notable sculptures include ‘Una’ in Canberra, Australia (2012), ‘Venus Rising’ in Brisbane, Australia (2011) and ‘Rise’ in Belfast, Northern Ireland (2011). One of his recent commissions has been the construction of British pavilion in the 2015 Milan World Expo. It has been dubbed as “pulsating virtual beehive”. His sculptures, although visually stunning, are always are than what meets the eye. His design are based on scientific observations of our universe, be it a beehive or constellations of northern hemisphere. He frequently works with a team of experts in designing and fabrication of his artwork. For more on the artist, check out his website.. click here.

Lucent was commissioned by Hearn, a Chicago based real estate investment firm. In 2013, Hearn Co. along with New York-based investment firm Mount Kellett Capital Management L.P. and San Antonio-based developer Lynd Co. acquired the Hancock Center’s office space and car parking deck. Soon after the acquisition, renovation started. Hearn envisioned the lobby to be as distinctive as the building itself, and Lucent fits the bills. The project was kept a top secret until its unveiling on May 26, 2015. It is already creating quite a sensation in the art world.