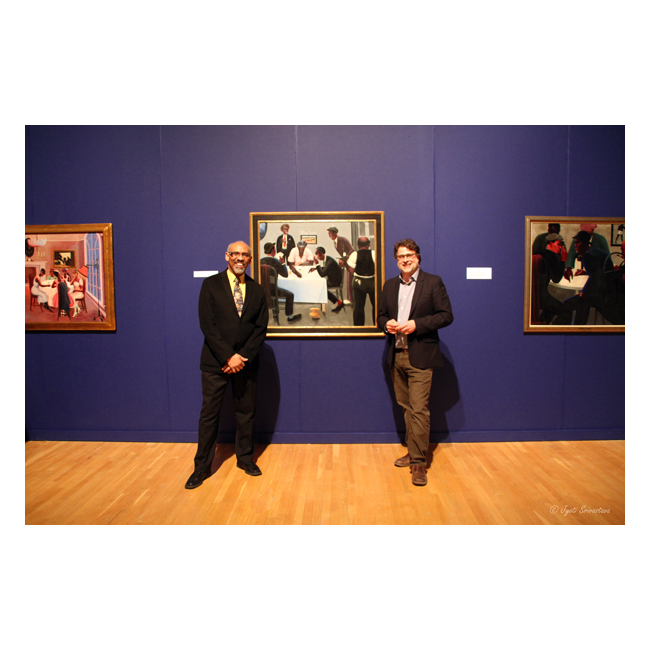 Above Image: Dr. Richard Powell [curator of the exhibition] and
Daniel Schulman [Director of Visual Arts for DCASE, Chicago] at the Opening Reception.

The exhibition is presented by the Chicago Department of Cultural Affairs and Special Events [DCASE],
and programmed by Columbia College Chicago. 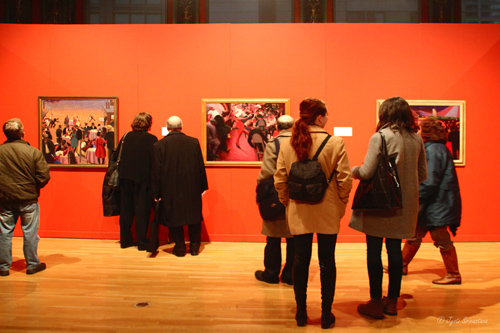 The exhibition celebrates the career of Archibald John Motley, Jr. (1891-1981), one of Chicago’s, in fact one of America’s foremost modernist painters. He is one of the most important painter of Harlem Renaissance. Unlike many other Harlem Renaissance artists, Archibald Motley, Jr. never lived in Harlem. He was born in New Orleans and spent the majority of his life in Chicago. His was the only black family in a fairly affluent, Chicago’s  Englewood neighborhood, then inhabited mostly by Irish, Swedish and German immigrants.  He spent a lot of his youth and adult years socializing in Bronzeville,  which became his primary artistic inspiration. He also spent some time in Paris in 1930 and Mexico in 1950s.  The exhibition showcases 42 paintings representing various periods of his lifelong career,  including Chicago’s Bronzeville, Jazz Age Paris and 1950s Mexico, as well as works that address slavery and racism.

The exhibition is curated by Dr. Richard J. Powell, John Spencer Bassett Professor in the Department of Art, Art History & Visual Studies at Duke University. The exhibition is presented by the Chicago Department of Cultural Affairs and Special Events [DCASE]. Special thanks to commissioner Michelle T. Boone and Director Daniel Schulman of DCASE for bringing this exhibition to Chicago. There are many additional educational programs in collaboration with Columbia College Chicago under Art Historian Dr. Amy M. Mooney.

“Archibald Motley: Jazz Age Modernist” is the first retrospective of the American artist’s paintings in two decades.  The earlier exhibition was in 1991, at the Chicago Historical Society [now the Chicago History Museum] and traveled to many high-profile venues in other cities. But Dr. Powell believes that its time to re-examine his art and secure his rightful prominent place in the canon of American Modern Art.  “In the twenty-odd years since his last retrospective exhibition, scholars have come to increasingly appreciate Motley’s poetic investigations into matters of urban identity – race, ethnicity, gender and class difference – in the early twentieth century”, said Daniel Schulman, director of visual arts for the Chicago Department of Cultural Affairs and Special Events. “Once ignored because of his race and his regional background, Motley is now seen as essential to understanding American art of the twentieth century”. 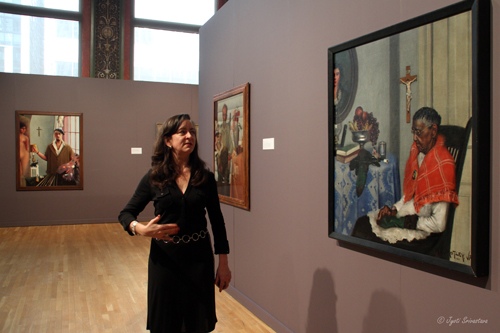 The exhibition is arranged thematically, with paintings organized under topics like Portraits, Nights in Bronzeville, Paris Blues, Between Acts, Hokum and Caliente. I was fortunate to be able to attend talks by two scholars on Motley’s works – exhibition curator Dr. Richard J. Powell [on March 6], and Art Historian Dr. Amy M. Mooney [on March 10] – which helped in the better understanding and appreciating the exhibition. 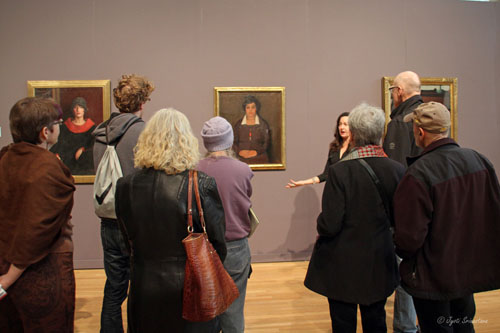 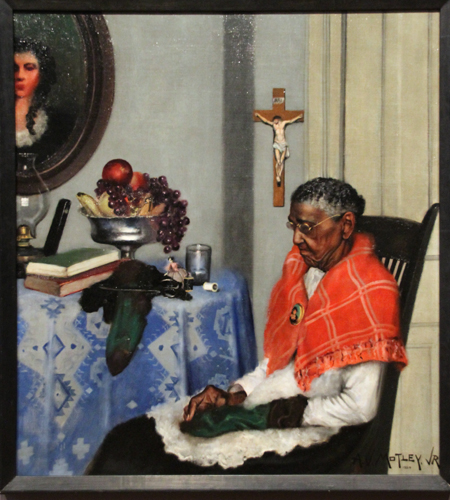 The exhibition begins with a series of  portraits.  Archibald Motley attended the School of the Art Institute at a time when many prominent art academies denied entrance to African American students. His classical training at the school is most evident in his series of portraits. Motley’s portraits show not only his command over skin tone and texture, but his mastery in bringing out the intrinsic personality of the character onto the two-dimensional surface of the canvas.  Small little details like pieces of jewellery,  wall-paintings, statuettes, or books on table, reflect the subject’s culture and social status. The exhibition includes paintings of Motley’s closest family members: his grandmother Emily Sims Motley, mother Mary Frederica Huff Motley Hill, and wife Edith Granzo Motley. Motley had some white and Native-American ancestry, and he married a white woman when this was illegal in most states. His wife is the subject of two impressive portraits from 1930, in one she is nude; “Nude [Portrait of My Wife]” and in the other, she is dressed elegantly with showy fox stole is titled “Portrait of Mrs. A.J. Motley Jr.” Motley also painted numerous portraits documenting women of mixed race. African-Americans with lighter skin usually had a higher status in society. Two paintings in the exhibition are of particular interest: “Mulattress with Figurine and Dutch Seascape” [1920], and “The Octaroon Girl” [1925]. “Octoroon” means one-eighth and “Quadroon” means one-quarter. Outside of my grandmother’s portrait, [The Octaroon Girl] is the best portrait I’ve painted he said. However, when it comes to portraits, perhaps the most interesting are the artists self-portraits. Then exhibition has two of his self-portraits, made in 1920 and in 1933. 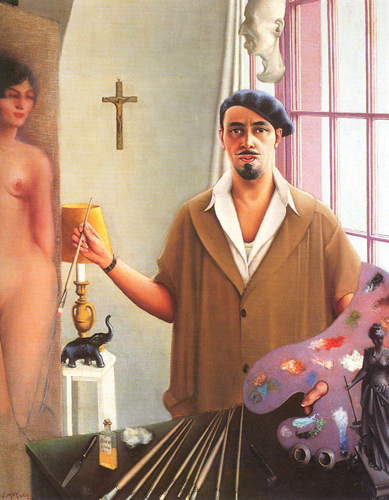 Self-Portrait [Myself at Work] 1933- by Archibald Motley / Collection of Mara Motley, MD, and Valerie Gerrald Browne.

As his earlier self-portrait in 1920, in this portrait too, Motley gazes straight into the viewer’s eyes. He is meticulously groomed and prominent in the foreground are an array of his paint-brushes and color-palette, all establishing him as a confident, observant and intense painter, even bordering towards being self-absorbed and egotistical. There are small little accessories that tell more abut the artist, like an isolated crucifix references to his Catholic faith, the plaster death mask overhead and the Greco-Roman goddess statuette besides him allude to his classical artistic training. A female nude gazes at Motley and one wonders if she is solely on canvas, or is standing in the room next to the artist; adding an element of intrigue to the painting! 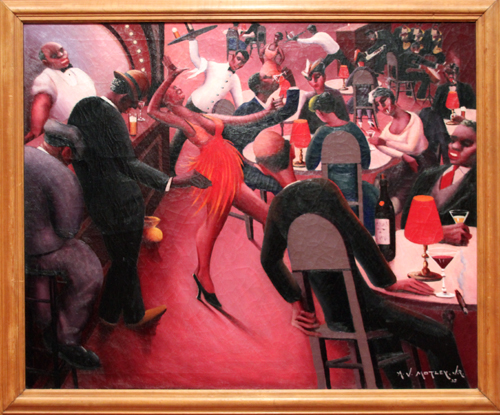 After Portraiture, we move to the theme “Nights in Bronzeville”.  In the early 1900s thousands of southern black migrants arrived in Chicago, and dramatically transformed the southern neighborhood of Chicago. By 1930s his area came to be known as Bronzeville – referring to the brown complexion of the people who predominated its streets and boulevards. Motley’s night scenes and crowd scenes of Bronzeville are perhaps his most famous! It is important to note that he himself came from an affluent black community of Chicago, lived in a white neighborhood, and married a white woman. However, he often socialized in the Black neighborhood of Chicago, which influenced his paintings. But what differentiated Motley’s paintings from more familiar examples of American Scenes paintings, were his human subjects, where rather than subscribing to naturalistic or idealized forms, he embraced distorted anatomies and rhythmic shapes. 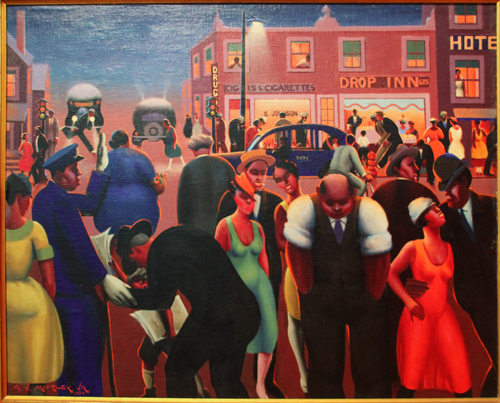 Also interesting in these paintings is the recurring appearance of a character, which Dr. Powell describes as Motley’s “Fat Man”. Fat Man becomes kind of a surrogate for the real life onlooker of Bronzeville, whether Caucasian, African-American, sly-gawker, art gallery visitor or like Motley, a symbolic observer from within the raucous interior. Fat Man makes appearance in many of his paintings that can be seen in the exhibition. It was fun spotting Fat Man in the exhibition! He can be seen in: The Plotters [1933], Black Belt [1934], Barbecue [1934], Boys in the Backroom [1934], Saturday Night [1935], The Picnic [1936], Carnival [1937], Sunday in the Park [1941], Barbeque [1960], Hot Rhythm [1961]. I have put up a separate post on Fat Man.. click here.. 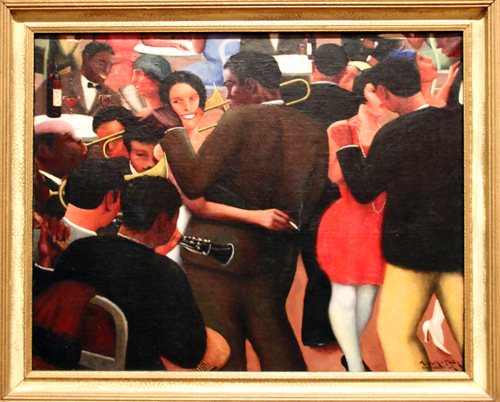 Archibald Motley spent 1929-30 in Paris, France on a Guggenheim Fellowship. These he created several paintings that captured the pulse of Bohemian life. One of the most famous painting from this period of “Blues” [1929]. Whereas Motley’s portraits reflect his command over classical training in paintings, his night scenes broke those classical rules. This has been wonderfully articulated in the words of Dr. Powell..

Archibald Motley was a product of the Art Institute of Chicago and that school was a renowned school for educating students to the rules of colors, of composition, of light, of just all things a good artist knew. As Picasso says, you have to know the rules in order to break the rules. “Blues” is a good example of Archibald Motley not only knowing how to paint in an academic traditional way, but then improvising on that, having fun with that, altering it, pushing and pulling. So you have reds against whites, you have these blues against pinks, and in fact he has pushed against basic notions of representationalism. They are literally people of color. They have pink skins, they have mergenta skins, they have blue black skins. And so Archibald Motley, as I said knows the rules, and breaks the rules in order to make a major modern artistic statement. 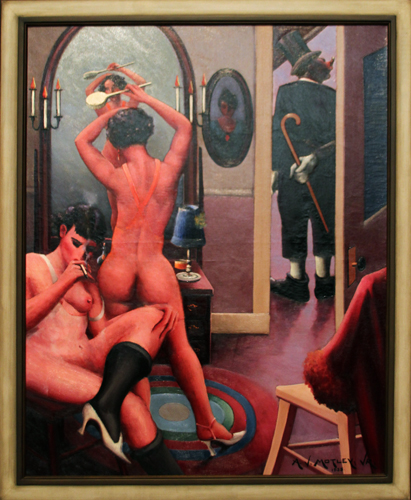 Motley was painting typical Chicago scenes. Chicago has a long and notorious history of adult entertainment, captured by Motley in his paintings like, “Between Acts” [1935] and “Backstage” [1959]. 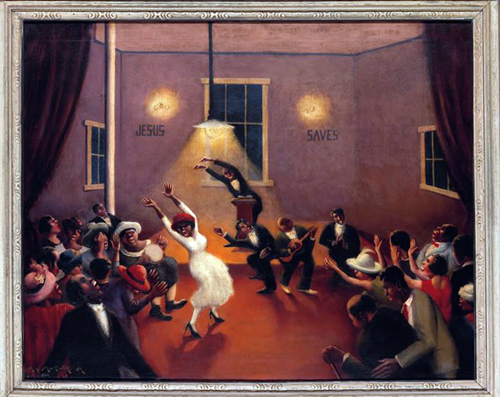 One of the themes which particularly interested me was “Hokum”, meaning utter nonsense or bunk. Text on the wall explains: “Hokum” was a term typically used in black culture to describe a ludicrous joke or exaggerated lowbrow element inserted into popular American music. Its visual equivalent emerged in paintings by Motley in the guise of excessively ecstatic churchgoers, stereotypical slaves, jungle “savages,” corpulent country bumpkins, blackface minstrels and licentious showgirls. 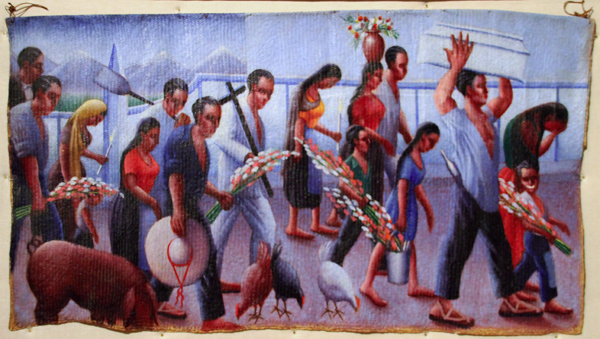 The exhibition also showcases paintings from Motley’s 1950s trip to Mexico to visit his nephew, the acclaimed writer Willard F. Motley. The painting “Another Mexican Baby” [1953-54] on a woven mat depicts the funeral procession of Mexican peasants grieving the loss of a baby. 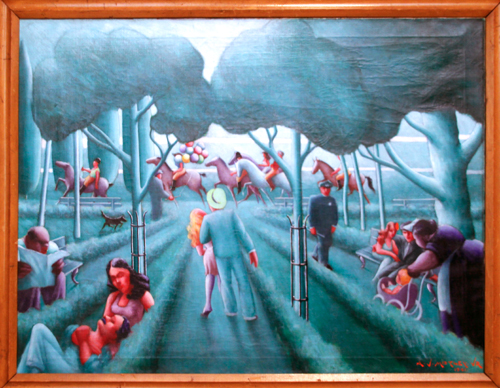 Sunday in the Park [1941] – by Archibald Motley / Collection of the South Side Community Center.

On the day of the Opening Reception of the exhibition [Friday, March 6], was a lecture by curator Dr. Richard J. Powell, of Duke University, in the Claudia Cassidy Hall at Chicago Cultural Center.
Here is an except from the lecture..

Some more images from the exhibition: 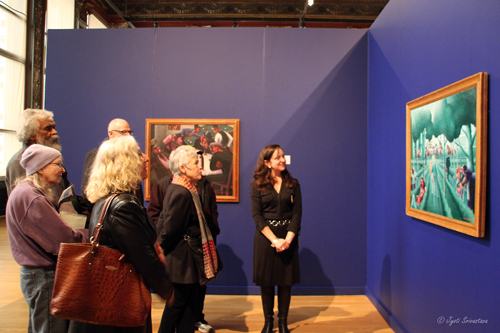 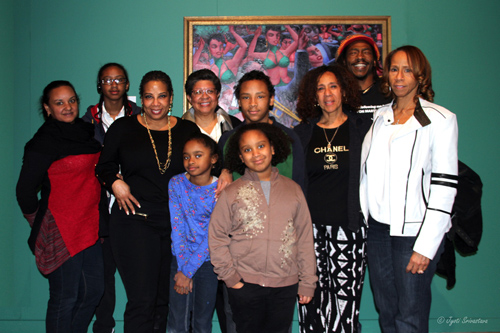 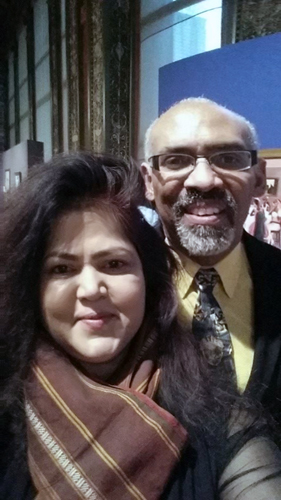 Finally I end the post with a selfie with curator Dr. Richard Powell! Thank You for this wonderful exhibition!

Here’s a note to all the readers, if you have not already seen the exhibition, make a way to it and see for yourself many nuances of Motley’s painting that review fails to capture. Also check out the many additional educational programs presented by Columbia College Chicago in collaboration with the Chicago Department of Cultural Affairs and Special Events. While at the Cultural center, also check out the Richard Hunt sculpture exhibition.