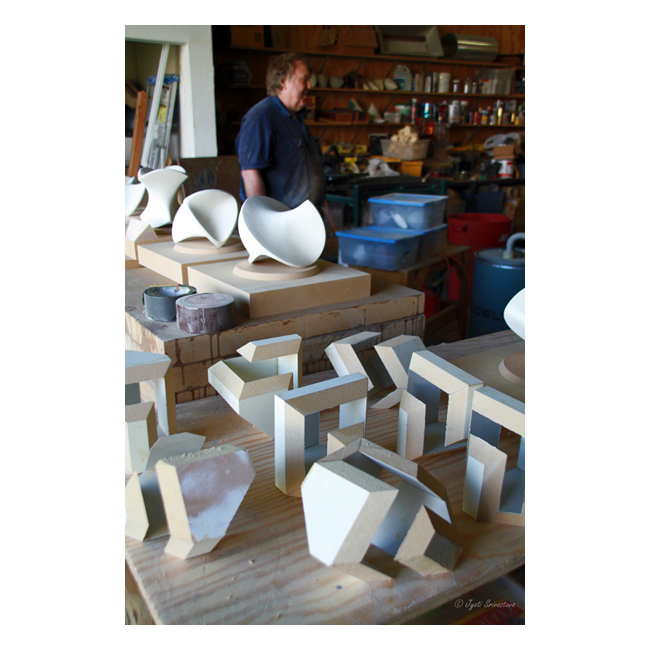 He now works from his studio in Thomson, Mississippi. 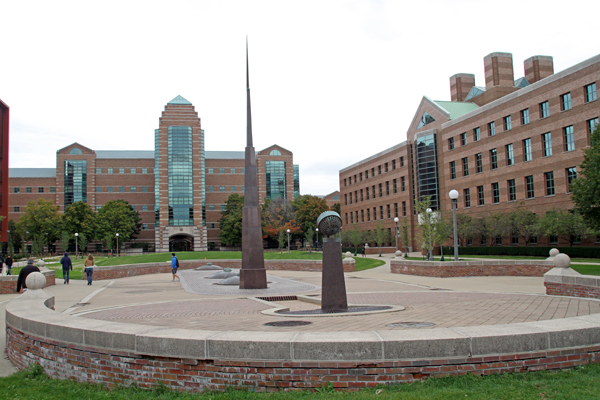 Steve Luecking is the artist behind many large-scale public art works across the country. The most famous being “Upwells” [1991] at University of Illinois North Science Campus, Urbana.  This environmental sculpture won design awards from the American Society of Landscape Architects in 1992 and 1995. Some other monumental sculptures by Steve Luecking  are “Gyrator” [1990] at Giant City State Park, Makanda, IL; “Aztalan Projects” [1993] at Aztalan State Archaeological Park, Lake Mills, WI; “Rising Rings” [1994] at Caparo Steel, Farrell, PA; and “Breaking Bonds” [1997] at Chem-Life Building, University of Illinois, Urbana, IL.

I had long wanted to meet him, ever since I saw his sculpture “Upwells” [1991] at University of Illinois Campus in Urbana. To my luck, Steve Mueller from Vector Fabricating, [who I know very well] is a good friend of Steve Luecking, and  arranged for the studio visit. 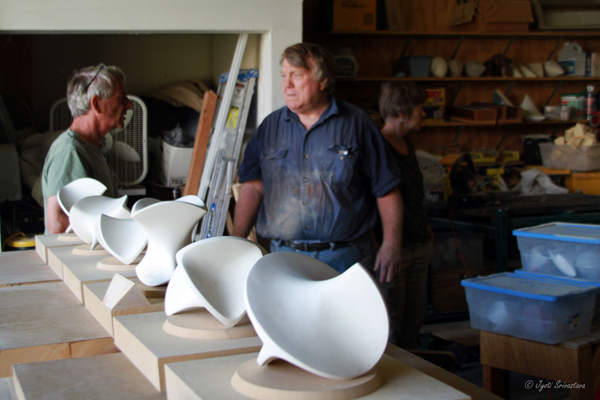 Studio visit of Steve Luecking with Steve and Debbie Mueller of Vector Fabricating:
On a beautiful fall morning of  September 29, 2015, we started our day-trip from West Chicago to Thomson, Illinois; on the banks of Mississippi River.  Debbie was driving, Steve Mueller was working on the backseat of the car, and I was enjoying countryside view and chatting with Debbie.  After about two-and-half hours of drive we reached our destination – the studio of Steve Luecking!

The studio is full of maquettes and small scale sculptures. At the very first look, it was obvious that his work was in the realm of constructive geometric forms, with emphasis on patterns, balance, and symmetry were the predominant features. There were ellipsoids, octoids, octahedrons and zoomorphs [some cool new terms I learned!]. He uses paper, wood and metal to experiment with complex and organic geometric forms.

“I was trained as a sculptor and have always been fascinated by the process of taking the most abstract of objects, such mathematical entities, and giving them the most concrete form, such as in cast iron. Such an act is to me the acme of creation: thought given directly to form. The fact that this is being effected by an imperfect creature into an imperfect world makes it all the more fascinating – especially now that even the nature of these imperfections are succumbing to mathematical descriptions.”
– Steve Luecking. 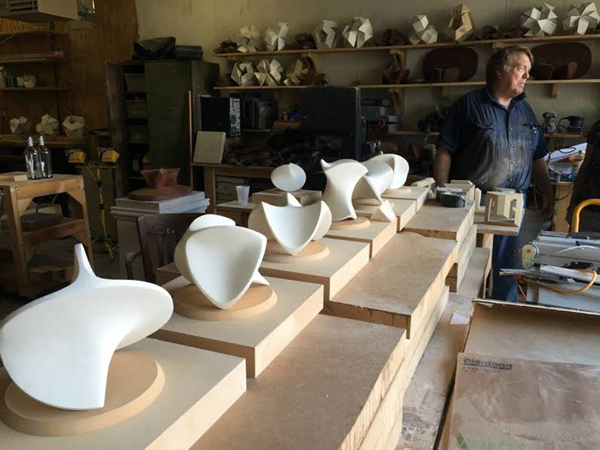 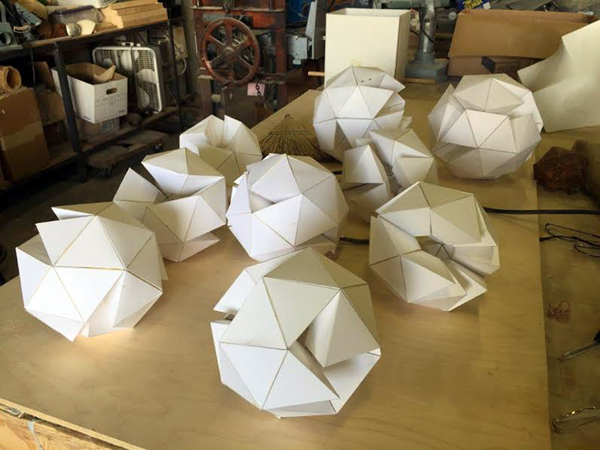 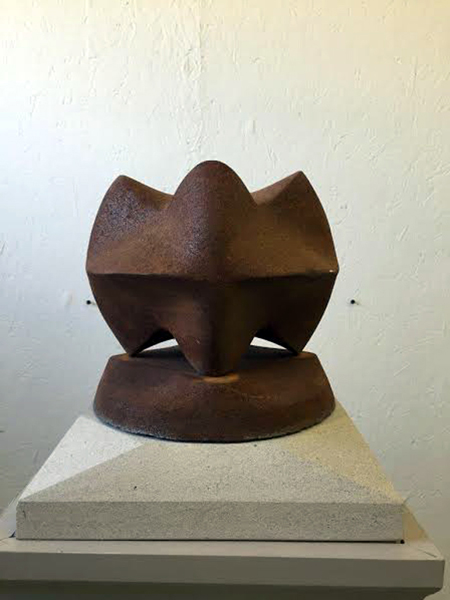 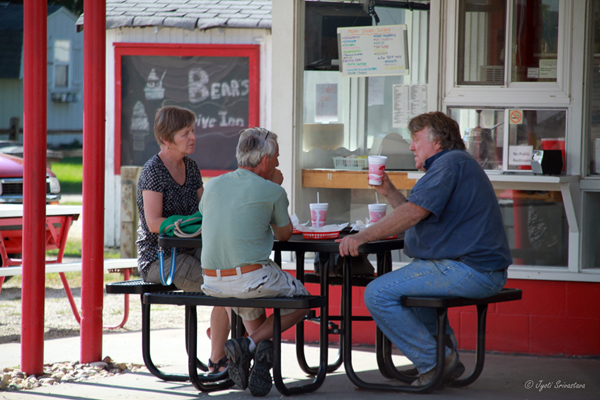 After spending quite some time in his studio, it was lunch time. 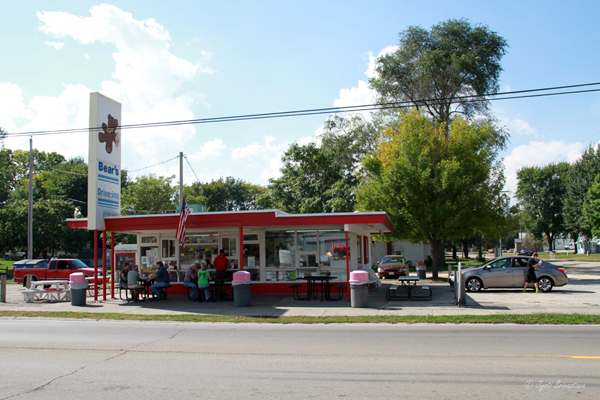 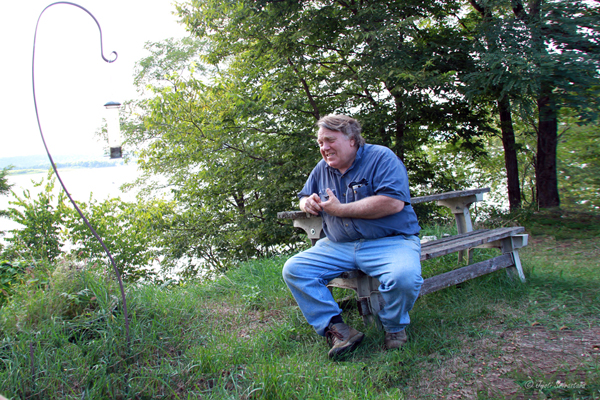 After lunch, we spent some time at his home on the banks of Mississippi River. This is what I enjoyed the most. The conversation ranged over a whole lot of topics.. from early Chicago abstract sculptors like Richard Hunt, John Henry, Jerry Peart.. to Mississippi River songs.. and a discussion on movies and/versus documentaries.. and so many more topics [some of which I did not follow].. But enjoyed the great company and the bucolic river view with barges and paddle-boats passing by .. and a perfect weather- neither too hot not too cold! 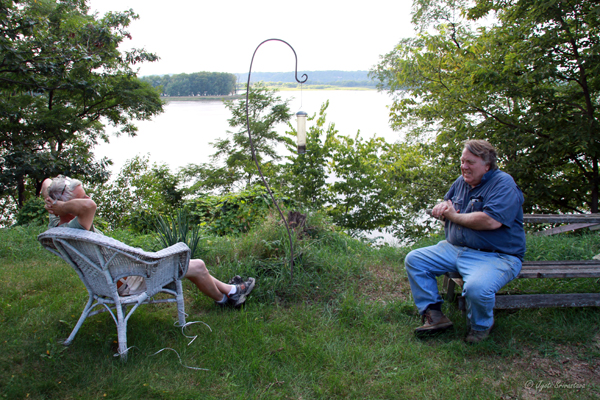 On the banks of Mississippi River

Thank You Steve Luecking, and Steve and Debbie Mueller! Thank You all for a great day! 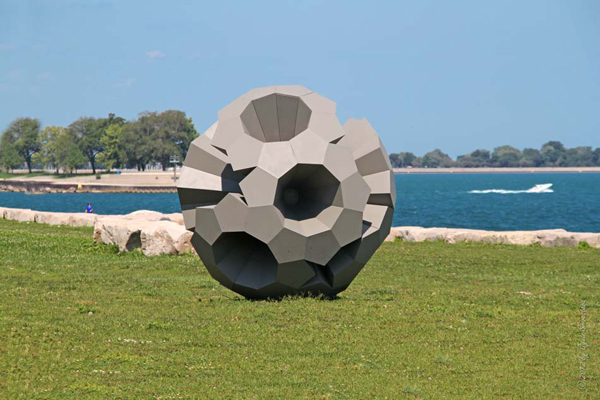