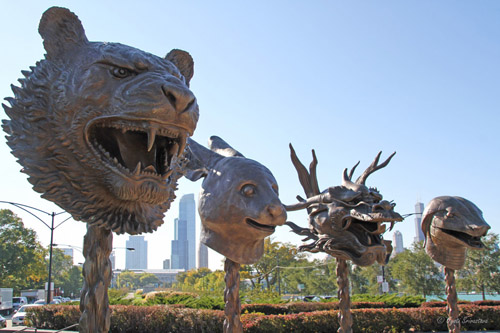 Circle of Animals/Zodiac Heads: Bronze – by Ai Weiwei arrived in Chicago at the time of 2014 Expo Chicago. It has been brought to Chicago by Chicago Park District [CPD] and the City of Chicago’s Department of Cultural Affairs and Special Events [DCASE]. 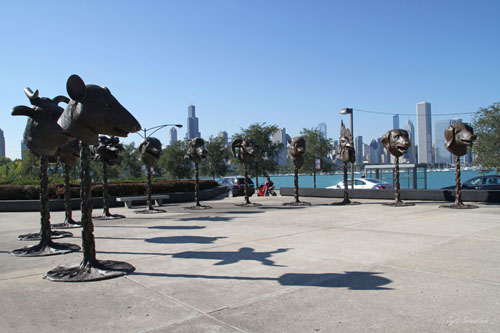 “But because Circle of Animals / Zodiac Heads is animal heads, I think it’s something that everyone can have some understanding of, including children and people who are not in the art world. I think it’s more important to show your work to the public. That’s what I really care about. When Andy Warhol painted Mao in the 1960s and 1970s, I don’t think many people understood Mao, either—it was just this image that people knew, like Marilyn Monroe or somebody. So they might see these zodiac animals like that—like Mickey Mouse. They’re just animals. Eleven real animals and one mystic animal.”   — Ai Weiwei 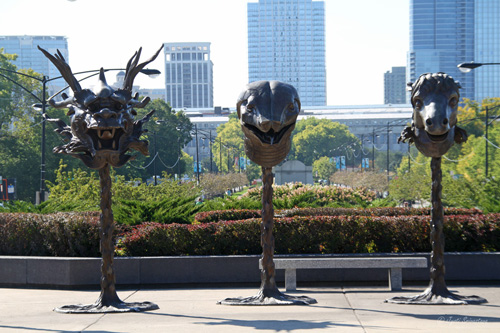 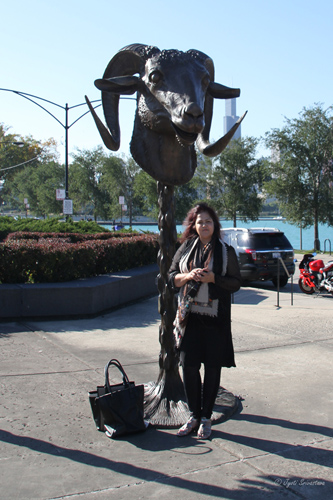 One of the most important contemporary artists, Ai Weiwei was born in 1957 in Beijing, China. He has been highly and openly critical of the Chinese Government’s stance on democracy and human rights. Ai Weiwei grew up the son of acclaimed poet Ai Qing and spent several years as a child exiled in the countryside during the Cultural Revolution. For more than a decade, from 1981 to 1993, he lived and worked in New York, returning to China in 1993. He was detained in April, 2011 for close to three months, causing an international outcry. He is currently prohibited from leaving Beijing. He has become an international symbol of the ongoing struggle for freedom of expression and dissent.

Ai Weiwei’s Zodiac Heads are recreation of the famous twelve bronze animal heads that once adorned the Old Summer Palace in Beijing, which was a complex of palaces and gardens and was known as Yuanming Yuan, or Garden of Perfect Brightness. It included Chinese-style gardens and architecture and also European-style palaces. Although the European palaces of Yuanming Yuan had a multitude of treasures of particular interest were the twelve bronze zodiac heads. They were designed by Giuseppe Castiglione, an Italian Jesuit artist and missionary to China and were cast around 1750. The bronze zodiac heads were set atop carved stone sculptures of seated human figures. The statues sprayed water from the mouth by turns on the hour to announce the time. These were placed in front of the largest of European display halls, the Haiyan Tang or the Palace of the Calm Seas.  These water-clock [or clepsydra, a type of clock that uses water to tell time] were complex set-piece that combined sculpture, hydraulics and Chinese and European aesthetics. In the 1860s they were looted by Anglo-French troops who took part in the destruction of Yuanming Yuan during the Second Opium War. The heads remain a potent trigger for Chinese nationalist sentiments. Ai Weiwei has been a vocal critic of plundering of China’s cultural heritage.

A post by Steven Litt on Cleveland.com  click here..  has very interesting information on the present status of the heads. Of the original twelve heads, seven are known to exist, and five are believed to be lost.  Of the seven,  Poly Group, a corporate arm of the Chinese military, owns five of them – monkey, ox, tiger, boar and horse.  Pierre Berge of Paris, the partner of the late French fashion designer Yves Saint-Laurent, owns [another two] the rat and the rabbit, and won’t part with them, unless China grants freedom to Tibet. Berge tried to auction the rat and the rabbit through Christie’s in Paris in February 2009.  An anonymous phone bidder won them with a bid of $38 million. Days later, a Chinese antiques dealer named Cai Mingchao revealed himself as the bidder but said he couldn’t pay. He said he made the fake bids as a political protest to foil the auction, according to Jones. The failed auction inspired Ai to create his zodiac series, according to the foreword in the exhibition catalog, written by Larry Warsh, an art world publisher and entrepreneur who has championed Ai’s work.

The zodiac heads of Yuanming Yuan fountain are inspiration of the Circle of Animals/ Zodiac Heads by Ai Weiwei. These were cast in 2010. Ai Weiwei created the 12 animals reinterpreting the surviving heads and envisioning the lost ones. The seven found heads are of monkey, ox, tiger, boar, horse, rat and rabbit. Ai Weiwei had to invent the lost five heads – dragon, snake, ram, rooster and dog – which he did in a variety of styles based on the remaining originals and his understanding of traditional Ming and Qing Dynasty design. Ai created the Zodiac Heads in two versions: large in bronze, for outdoor public art, and small in gold, which are closer in size to the original are for museum displays.

The Zodiac Project is Ai Weiwei’s first major public sculpture. These are touring sculptures. They have appeared in São Paulo [Brazil], New York [New York], London [UK], Los Angeles [California], Taipei [Taiwan], Houston [Texas] and Washington D.C., Kyiv [Ukraine],  and  Princeton [New Jersey] before stopping in Chicago. They  were unveiled on Sep 17, 2014  and will be on display through April 15, 2015. I had seen these earlier in my vacation to New York in 2011 .. click here..

Chinese zodiac is based on a twelve year cycle, each year in the cycle related to an animal sign. Each one has his own animal sign according to his year of the birth.  Chinese believe that the animal ruling one’s birth year has a profound influence on personality, and destiny. The saying is: “This animal hides in your heart.” Unlike Western astrology, it does not look the heavenly constellations or planets to predict one’s destiny. The year 2014 is the Year of Horse.

Circle of Animals/Zodiac Heads: Bronze – by Ai Weiwei has been brought to Chicago by Chicago Park District [CPD] and the City of Chicago’s Department of Cultural Affairs and Special Events [DCASE]. These were unveiled on Sep 17, 2014 and will be here till April 15, 2015.

Previous tours of  Zodiac Heads  include: 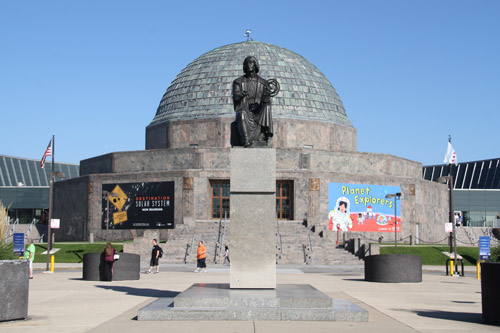 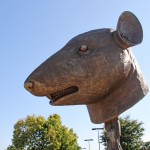 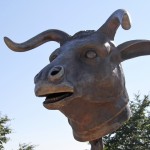 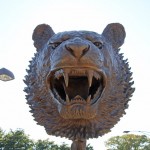 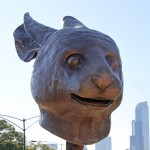 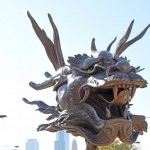 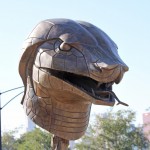 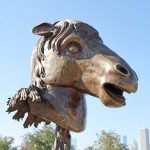 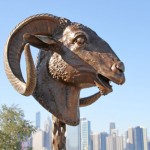 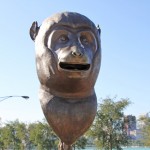 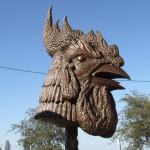 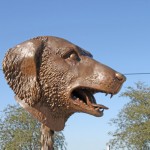 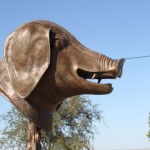