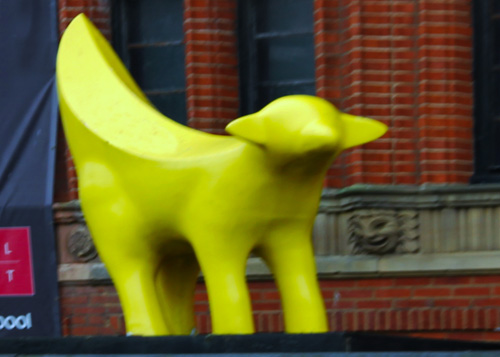 Superlambanana or Super Lamb Banana was designed by Manhattan-based Japanese artist Taro Chiezo. The sculpture is a comment on the dangers of genetic engineering and is heavily influenced by the history of Liverpool: historically both sheep and bananas were common cargos in the Liverpool’s docks. Chiezo himself only created a four-inch model; the full-size replica was made by four local artists: Andy Small, Julian Taylor, Tommy Reason and Ray Stokes. 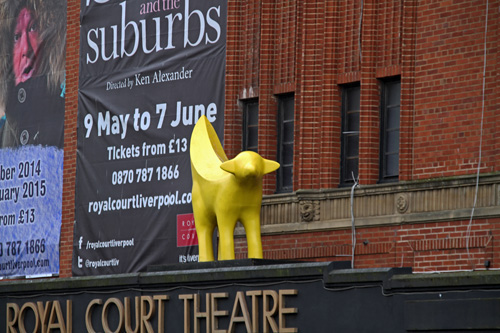 The sculpture was created for the ArtTransPennine Exhibition in 1998, part of an initiative to create a ‘corridor of art’ through the North of England. Since the conception it was intended to move around the city and not remain in one location. It was originally located on the Strand near Liverpool’s famous Liver Building and has since been located in several places. In my June 2014 trip to Liverpool, I saw one located on the Royal Court Theater. I also saw one in the  St George’s Hall. 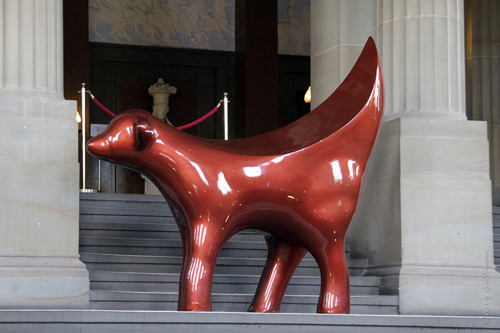 The Go Superlambananas!
In 2008, The Go Superlambananas! art exhibition was developed by the Liverpool Culture Company (LCC), led by its Creative Director Phil Redmond, in partnership with the Wild In Art. It was developed a part of Liverpool’s celebration as the “Capital of Culture”. 124 replicas of Superlambanana, each about 2 meter high, were created. Each of these acted as a blank slate, on which various groups throughout the city could develop and design their own cultural contribution the city’s celebrations. Each one being sponsored by a local institution or business and designed by local community members. These were located throughout Liverpool and the surrounding areas. At the end of their ten week run, the mini Superlambananas were auctioned off for the Lord Mayor’s charities, with each having a guide price ranging from £3,000 to £8,000. In total they sold for a combined sum of £550,000 or approximately £7,800 each, well above estimates.