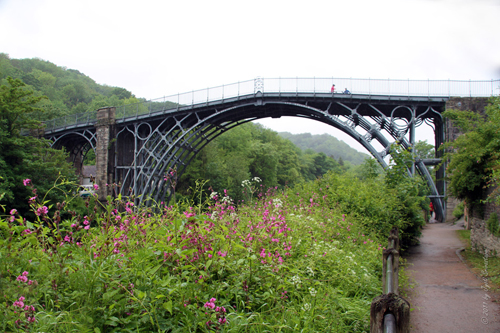 In 1986, UNESCO inscribed Ironbridge Gorge in the World Heritage List.

Ironbridge Gorge has been classified as a World Heritage Site for the area’s unique contribution to the birth of the Industrial Revolution in the 18th century which had a worldwide impact.

What is Ironbridge Gorge?
The Ironbridge Gorge is a deep gorge formed by the River Severn in Telford, Shropshire, England. Originally called the Severn Gorge, the gorge now takes its name from its famous Iron Bridge, the first iron bridge of its kind in the world. The bridge was built in 1779 to link the industrial town of Broseley with the smaller mining town of Madeley and the growing industrial center of Coalbrookdale.

The Industrial Revolution had its 18th century roots in the Ironbridge Gorge and spread worldwide leading to some of the most far-reaching changes in human history. The site incorporates a 5 km length of the steep-sided, mineral-rich Severn Valley from a point immediately west of Ironbridge downstream to Coalport, together with two smaller river valleys extending northwards to Coalbrookdale and Madeley. 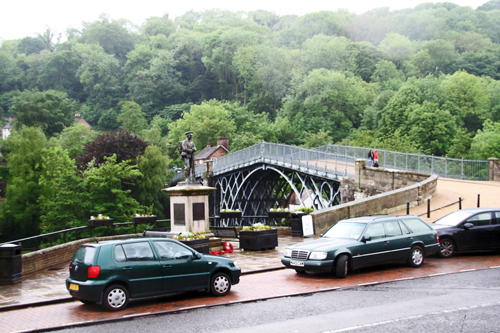 Ironbridge George is known throughout the world as the birthplace of the Industrial Revolution. It contains all the elements of progress that contributed to the rapid development of this industrial region in the 18th century, from the mines themselves to the railway lines. Two important elements are: The Coalbrookdale blast furnace and the Iron Bridge.

The blast furnace of Coalbrookdale, built in 1708, is a reminder of the discovery of coke. It was the creative effort of Abraham Darby I who discovered the production technique of smelting iron using coke instead of charcoal. It is a masterpiece of man’s creative genius in the same way as the nearby the Iron Bridge. The bridge at Ironbridge, the world’s first bridge constructed of iron, had a considerable influence on developments in the fields of technology and architecture. It was built in 1779 by Abraham Darby III from the drawings of the architect Thomas Farnolls Pritchard.

The Ironbridge Gorge provided the raw materials that revolutionised industrial processes and offers a powerful insight into the origins of the Industrial Revolution and also contains extensive evidence and remains of that period when the area was the focus of international attention from artists, engineers, and writers. The property contains substantial remains of mines, pit mounds, spoil heaps, foundries, factories, workshops, warehouses, iron masters’ and workers’ housing, public buildings, infrastructure, and transport systems, together with the traditional landscape and forests of the Severn Gorge. In addition, there also remain extensive collections of artifacts and archives relating to the individuals, processes and products that made the area so important. 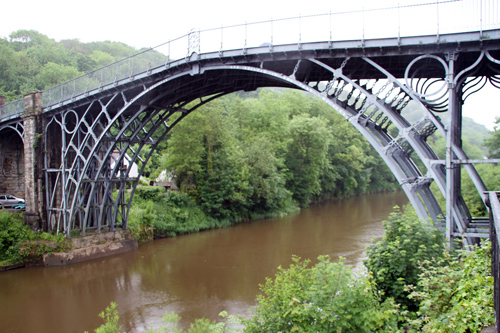 River Severn and Iron Bridge – world’s first bridge made of iron. Completed in 1779. 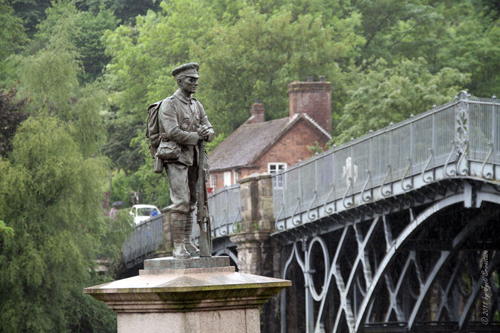 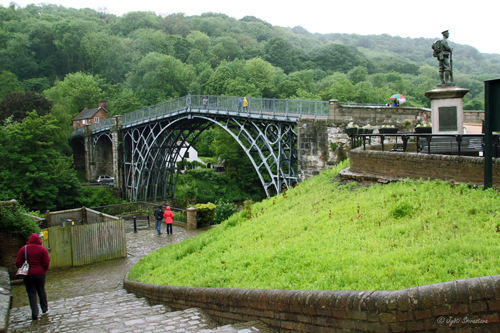 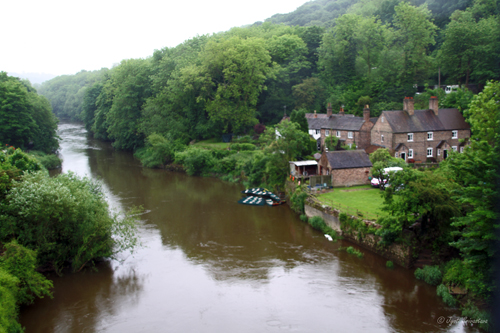 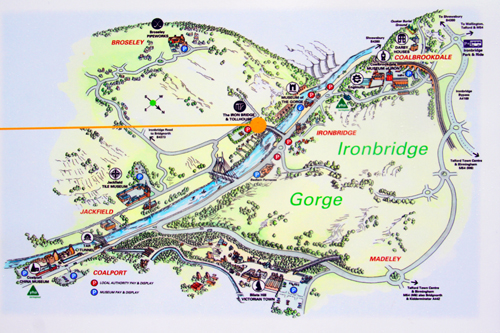 The Ironbridge George World Heritage Site has five major areas of interest:
COALBROOKDALE: This is where in 1709 the Quaker Abraham Darby I developed the coke-based iron production technique which began the great 18th century steel revolution. There still remains a high concentration of 18th- and 19th-century dwellings, warehouses, churches and chapels in the town. The Great Warehouse contains an iron museum.

IRONBRIDGE: The locality where mining and metallurgical activity began in the 17th century draws its name from the iron bridge erected in 1779, which also serves to designate the entire region of the Severn Gorges.

HAY BROOK VALLEY: Downstream from Madeley in the low valley of this small tributary of the Severn River, a large open air museum was set up on Blists Hill. Extraction galleries, shafts with their head-frames and blast furnaces have been preserved.

JACKFIELD: A small town located on the south bank of the Severn made its living from coal mining, clay production and navigation. It was the valley’s port of registry.

COALPORT: This town is located at the far east end of the protected zone on the north bank of the Severn, which is spanned by a metal bridge from 1780-1818. The high point of this town is the porcelain manufacturing plant founded by John Rose at the end of the 18th century which closed down only in 1926. Today it is a porcelain museum.