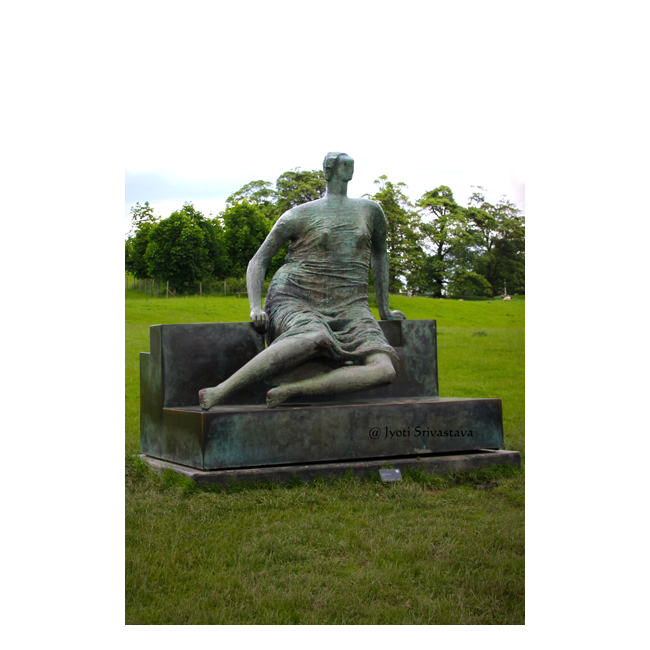 Henry Moore is one of my favorite sculptors. And Yorkshire Sculpture Park [YSP] has one of the best collection of Moore sculptures that I have seen ! It is also one of  the most breathtaking sculpture parks  that I’ve seen, with large undulating landscape and spectacular view.

Henry Moore was born in Castleford, Yorkshire, which is about 8 miles from this Yorkshire Sculpture Park. So he pretty much grew in this area.. and was profoundly influenced by this beauty.. He said.. “Perhaps what influenced me most for wanting to do sculpture in the open, and relate my sculpture to landscape, comes from my youth in Yorkshire.”

Moore loved his sculptures to be outdoors .. He said.. “Sculpture is an art of the open air. Daylight is necessary to it. I would rather have a piece of my sculpture put in a landscape, almost any landscape, than in, or on, the most beautiful building I know.

So here are a few Henry Moore sculptures in a landscape he wanted them to be.. . 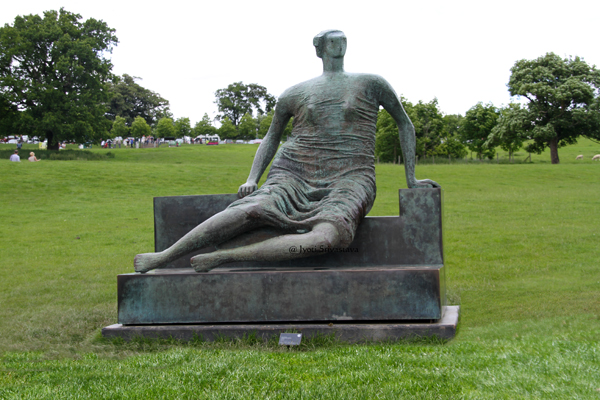 Draped Seated Woman sculpture depicts a female figure resting in a seated position, with her legs folded back to her right, her left hand supporting her weight, and her right hand on her right leg. The drapery emphasises the female figure, but the facial features are abstracted and barely picked out.

Henry Moore was a war artist in the Second World War. He made a series drawings of people in London sheltering from the Blitz in the Underground, swathed in thick clothes. These drawings sparked an interest in drapery which was renewed by the classical sculptures that Moore saw during a trip to Greece in 1951. He was attracted by the ability of the drapery to draw attention to some parts of the human form by lying tightly on the shoulders, thighs or breasts while concealing other parts where the wrapping falls slack, and also by the varied textures created by small and large folds in the material.

Moore make a series of sculptures of draped human forms in the 1950s after he was commissioned to create a sculpture for the new UNESCO Headquarters building in Paris. He wanted to create a figure in an architectural context, and turned to the seated human form. The first work in the series in 1955 was a marquette, Draped Seated Woman: Figure on Steps, cast in a series of 10. This became the working model for the full-size sculpture that became his Draped Seated Woman 1957–58. He also made a similar work Draped Reclining Woman 1957-58. Moore ultimately abandoned these ideas for the UNESCO commission, and his UNESCO Reclining Figure 1957-58 is a much more abstract reclining form in travertine.

Henry Moore, a well-known socialist, had sold the sculpture “Draped Seated Woman” [1957–58] at a fraction of its market value to the former London County Council on the understanding that it would be displayed in a public space and might enrich the lives of those living in a socially deprived area. Nicknamed Old Flo, it was installed on the Stifford council estate in 1962 but was vandalized and moved to the Yorkshire Sculpture Park in 1997. 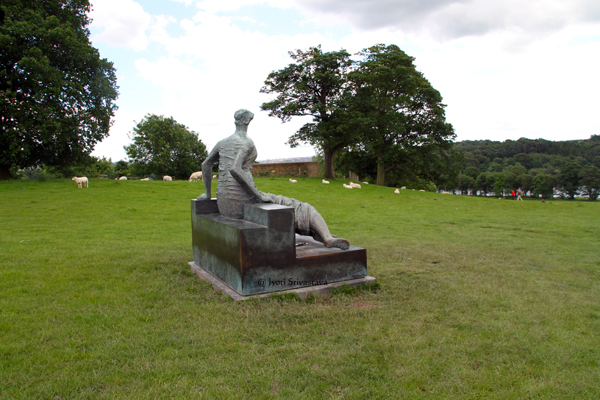 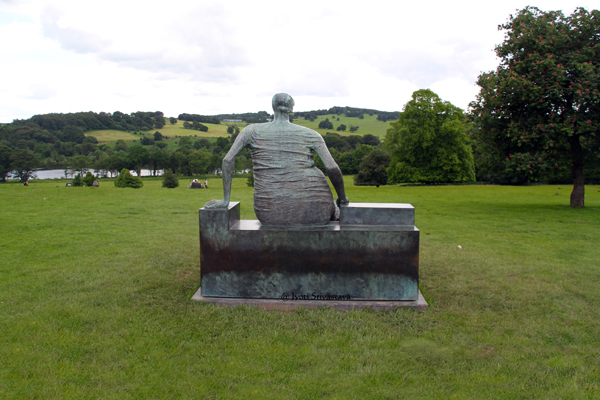 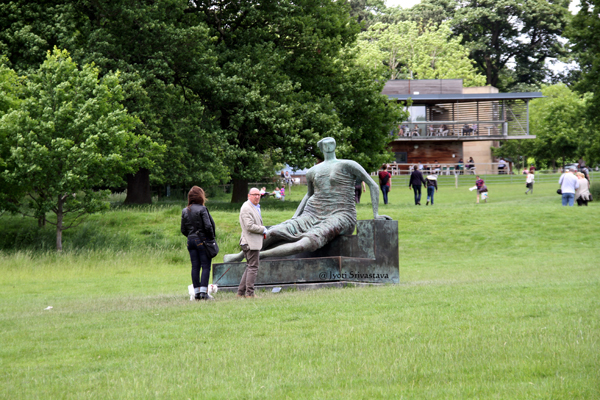 Henry Moore [1898-1986] was a leading artist of the 20th century. His monumental carved and bronze sculptures can be seen in art galleries and city centers around the world.

Moore was born in the nearby town of Castleford, once an important center for coal mining, and now part of the City of Wakefield Metropolitan Borough. He often referred to the influence of West Yorkshire landscape on his development as a young artist and and preferred his work to be outdoors.

“Sculpture is an art of the open air. Daylight, sunlight is necessary to it. I would rather have a piece of my sculpture put in a landscape , almost any landscape than in or on the most beautiful building I know.”

Moore visited Yorkshire Sculpture Park in 1979 and expressed his strong interest in siting his work in the Country Park. His desire became reality in 1994, and since then, there has been a changing display of his bronzes here. The Country Park was an 18th century Deer Park for the Bretton estate. During the mid 1700s the landscape designer Richard Woods worked at Bretton and at this time hills and lakes were created, and trees and shrubs planted, forming many of the landscape features that we see today.

Sculptures by Moore has been sited within this landscape, enabling visitors to explore and discover relationships between art, landscape and nature. The undulating hills and distant views offer setting to suit the character of individual sculptures and space in which to view them from all angles.

The setting is more landscape than parkland, requiring a walk through the countryside to appreciate the full power of each piece. The element of surprise is the key to siting of these works. Moore said that sculptures is like a journey, “proving different views as you return”. Moore began creating sculptures specifically for the open air in the late 1930s. When he moved to a country hamlet in Hertfordshire in 1940, this aspect of his work became increasingly important and he later sited a number of his sculptures in the fields around his cottage.

“For myself, I have always been very interested in landscape. As well as landscape views and cloud formations. I find that all natural forms as a source of unending interest – tree trunks, the growth of branches from the trunk, each finding their individual air spaces, the texture and variety of grass, the shape of shells, of pebbles etc. The whole nature is an endless demostration of shape and form and it surprises me when artists try to escape this” 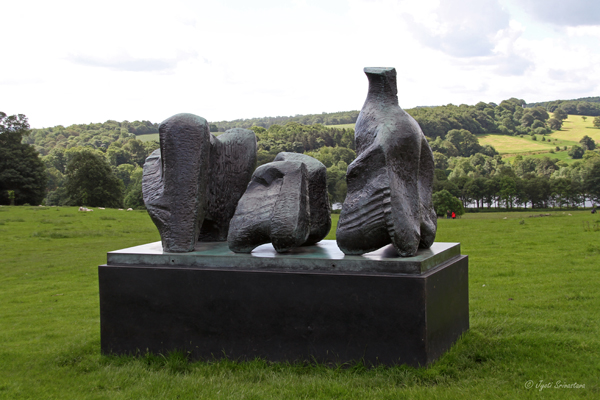 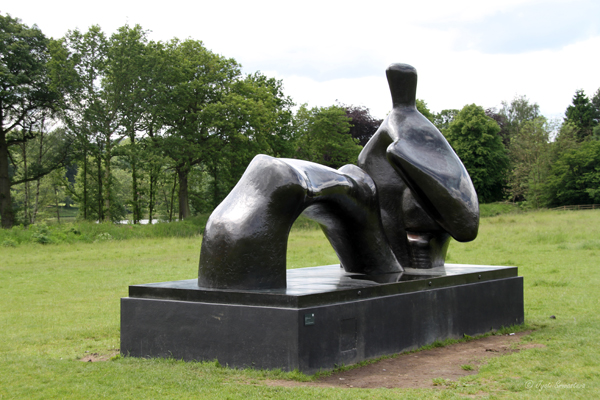 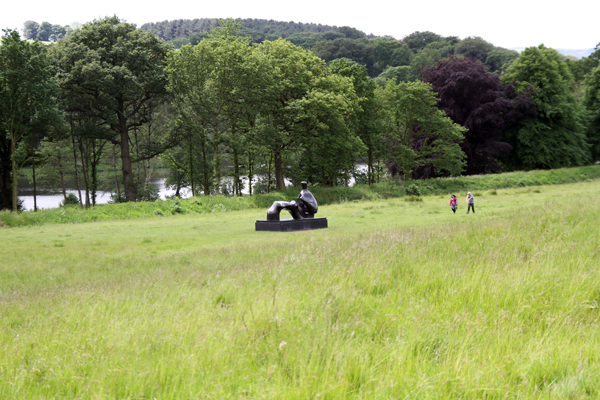 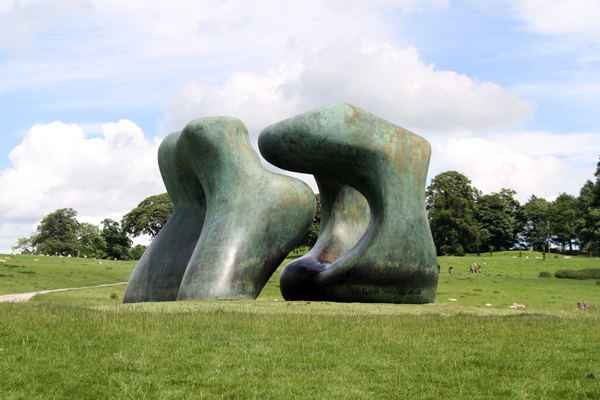 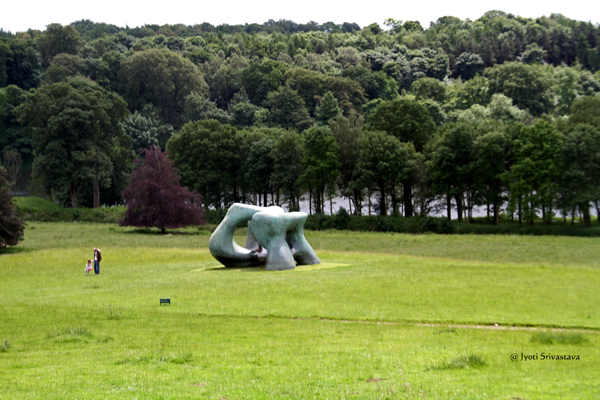 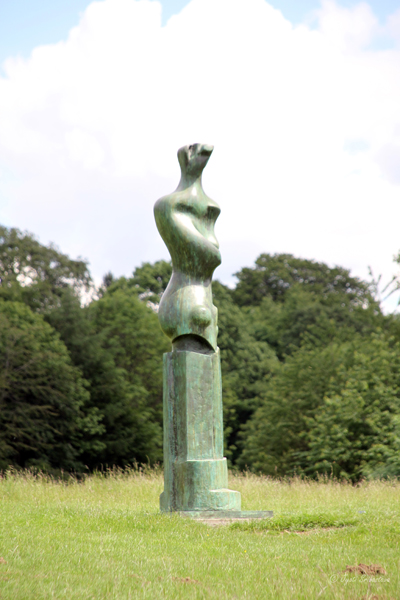 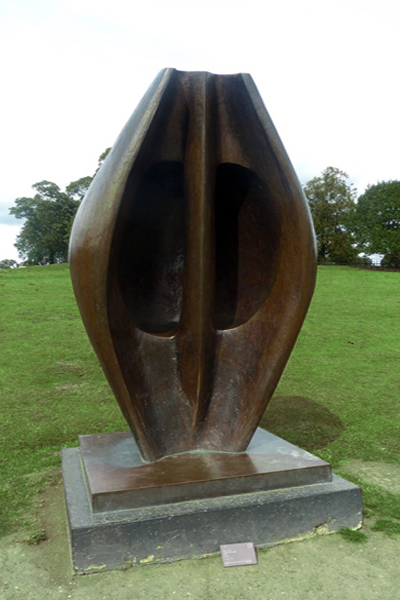 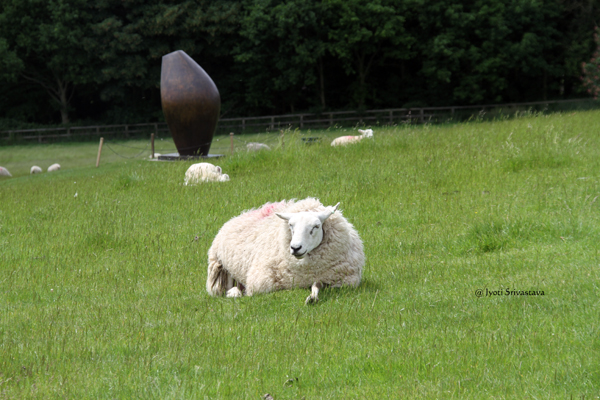 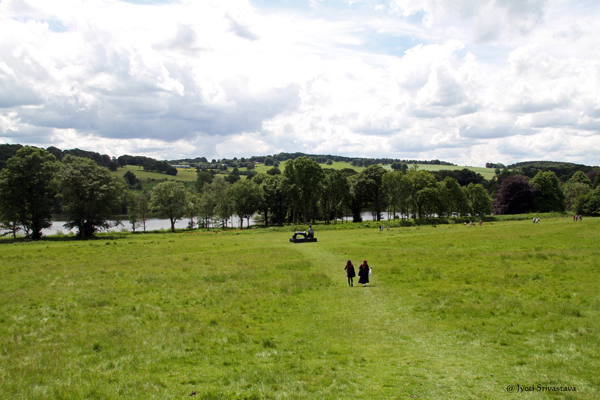