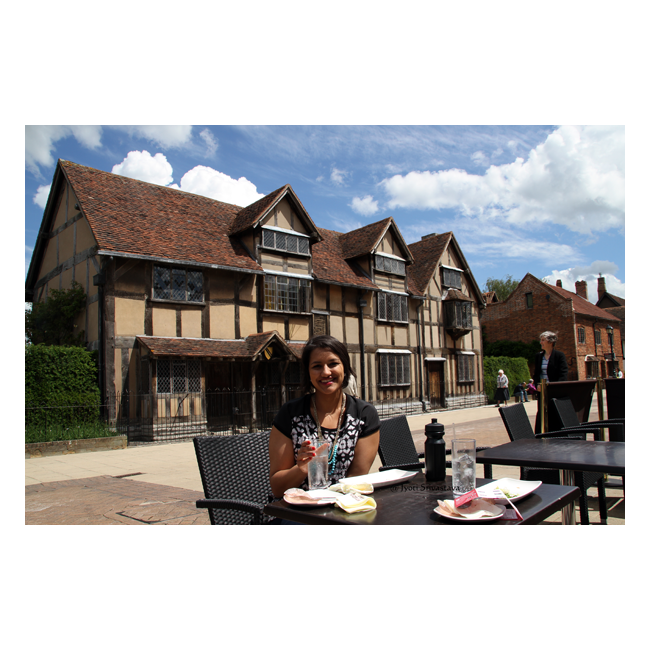 Above Image: The house where it is believed that William Shakespeare was born in 1564 and spent his childhood years
at Henley Street, Stratford-upon-Avon, Warwickshire, England. In the image is my niece Tanvi Sinha.

Shakespeare’s Birthplace is a restored 16th-century half-timbered house situated in Henley Street, Stratford-upon-Avon, Warwickshire, England. It is believed that William Shakespeare was born here in 1564, and spent his childhood years. Shakespeare also spent the first five years of married life in this house with his new wife, Anne Hathaway. It has been referred to as “a Mecca for all lovers of literature.”

It is now a small museum open to the public and a popular visitor attraction, owned and managed by the Shakespeare Birthplace Trust. 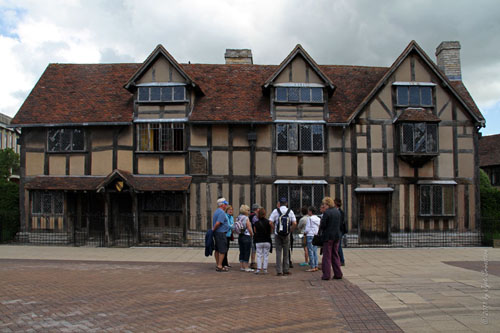 The trip to Stratford-Upon-Avon was with my niece. We explored the town on foot. And had really great lunch, right outside his birthplace. 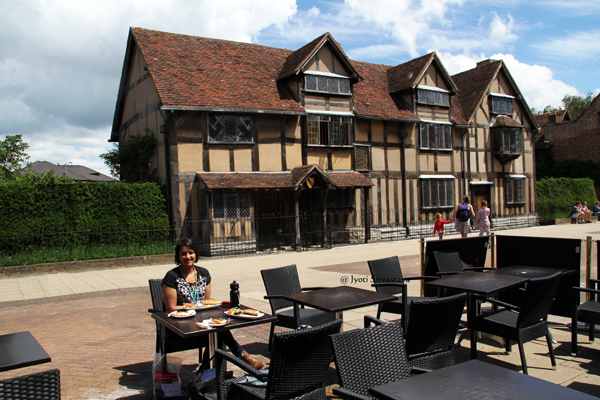 Lunch with my niece Tanvi Sinha in front of the birthplace of William Shakespeare,
at Henley Street, Stratford-upon-Avon, Warwickshire, England. 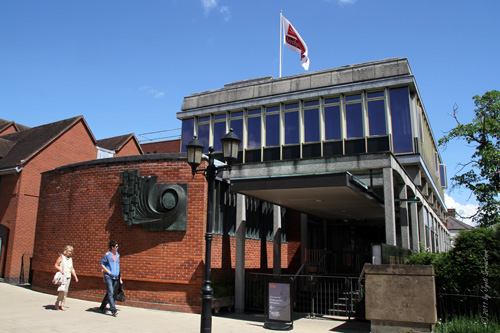 The entrance to Shakespeare’s birth home is through the Shakespeare Birthplace Trust Building.

Shakespeare Birthplace Trust [SBT] maintains and preserves the Shakespeare Birthplace properties, a museum, library of books, manuscripts, records of historic interest, pictures, photographs and objects of antiquity with particular reference to the life and times of William Shakespeare, and is also home to the headquarters of the International Shakespeare Association. The SBT is an independent registered educational charity based in Stratford-upon-Avon, Warwickshire, England.

Shakespeare Birthplace Trust was formed in 1847 following the purchase of William Shakespeare’s birthplace for preservation as a national memorial. There was a wave of public concern about the future of the birthplace. In 1891 an Act of Parliament enshrined the Trust’s purposes ‘for the benefit of the nation’. It can also lay claim to be the oldest conservation society in Britain. It receives no government funding or public subsidies, and is totally dependent upon the public for support, and relies on donations and the income generated from visitors. Today the Trust cares for five Tudor houses directly connected to Shakespeare, and library and archive an museum collections of international importance. The Trust also celebrates Shakespeare’s national and international legacy by inviting collaborations with artists, writers, performers and centers for cultural expression around the world. 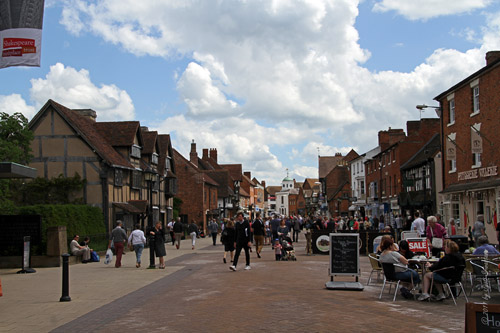 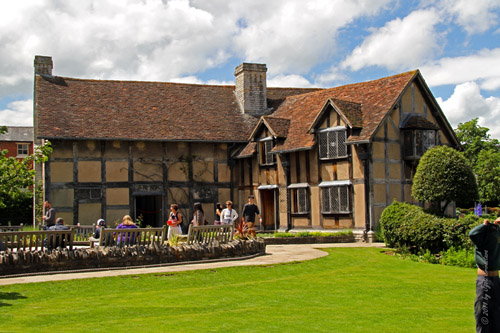 William Shakespeare was the son of John Shakespeare, a glove-maker, and his wife Mary Arden. Although the date of William’s birth is not recorded, parish record show that he was baptized at Holy Trinity Church, Stratford-Upon-Avon on 26th April, 1564, when he was about three days old.

William Shakespeare was the oldest surviving child of John Shakespeare and his wife Mary Arden. The couple had two daughters who died as babies before William was born, and then, they went on to have five more children. Shakespeare was born the same year as plague hit the town of Stratford-upon-Avon and he was lucky to survive.

In 1582, when he was 18, Shakespeare married 26-year old Anne Hathaway. At that time, she was already pregnant with the first of their three children, Susanna, who was born in 1583. Twins Hamnet and Judith followed in 1585. William and his family lived with his parents in this house known today as Shakespeare’s Birthplace. Like his parents, he suffered loss of a child when his son Hamnet died at age 11.

Presumably seeking good fortune, Shakespeare left his family for London and by about 1592 was part of the established theater community in the capital. Shakespeare was so successful that in 1597, he was able to purchase the largest house in the center of Stratford-upon-Avon. It was called New Place.

Shakespeare lived to know one of his grandchildren. Elizabeth Hall was his only grandchild to marry. She had no children, so there are no direct descendents of William Shakespeare. 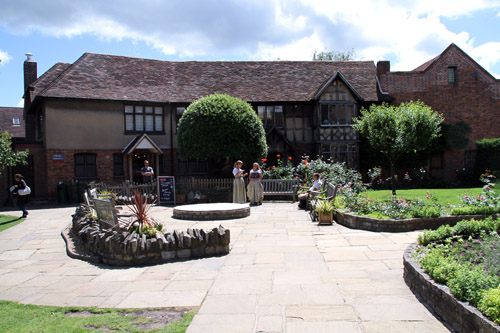 Like most of the Stratford’s sixteenth century houses, the Birthplace was built from local materials, using oak [from nearby Forest of Arden] for the timber frame and stone [from a quarry at Wilmcote, three miles from the house] for the foundation walls, chimneys and some of the floors. Despite alterations and restoration work over time, much of the original structure of the house survives.

The Main House: The design of the house where Shakespeare grew up followed a traditional plan. On the Ground Floor was a parlor and adjoining Central Hall [dining place], separated from the service / work-shop area by a cross-passage. Above [First Floor] were bedchambers and probably attic rooms.

It is likely that there were separate kitchen and brew house at the back of the house, with other outer-buildings and workshop areas, used by Shakespeare’s father, who was a glove maker and wool dealer.

The Rear Wing:  Shakespeare inherited the main house in 1601 when his father died. Although it’s believed that Shakespeare wasn’t living in the house during this period, he built a rear wing when the house became an inn / tavern called “The Maidenhead” – perhaps run by Shakespeare’s tenant. In the 18th century, the tavern was renamed “The Swan and Maidenhead”.

Shakespeare’s House today: The parlour, hall, workshop and bedchambers are furnished as they would have looked in 1574, when the house was full of children: William [10 years], Gilbert [8 years], Joan [5 years], Anne [3 years] and baby Richard. Rare items of middle class 16th century furniture are set in the context. 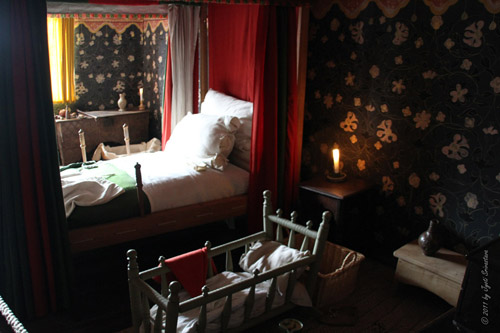 Shakespeare’s parent’s bedroom: The Room in which it is said that Shakespeare was born / First Floor 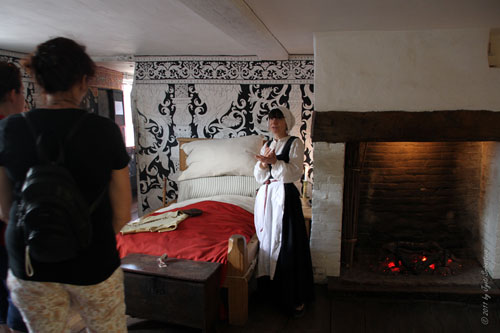 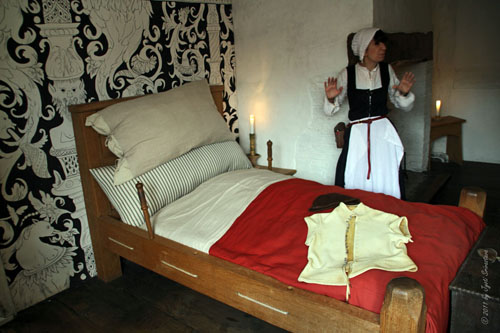 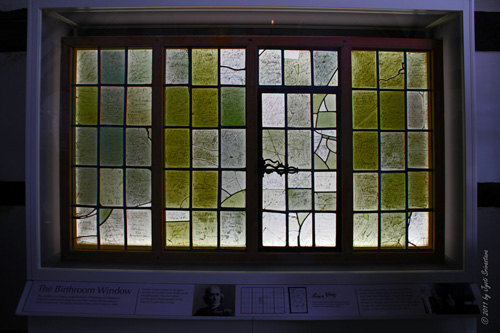 Shakespeare’s Birth-room Window – Now in the lobby which was his sister’s room / First Floor.

Shakespeare’s Birth-room Window – Shakespeare’s Birthplace has been a place of pilgrimage. In 1769 when David Garrick, a famous Shakespearean actor, organized the first Shakespeare festival in Stratford-upon-Avon. Since then, the house has been visited by scores of famous writers including…. John Keats, Sir Walter Scott, Charles Dickens, Mark Twain  and Thomas Hardy…. among many other dignitaries. It became a tradition among the pilgrims to etch their names into the glass as a symbol of their visit. They used diamond rings to scratch their names.  The earliest recorded date on the window is 1806. The birth-room  window has  now been replaced, but the original glass panes are now on display in the lobby , which used to be Shakespeare’s sister’s room. 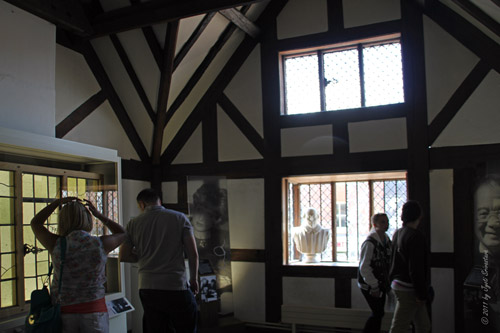 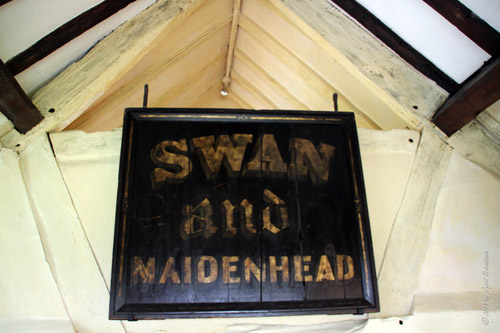 Shakespeare’s Birthplace: Rear Wing , which was a tavern, Swan and Maidenhead 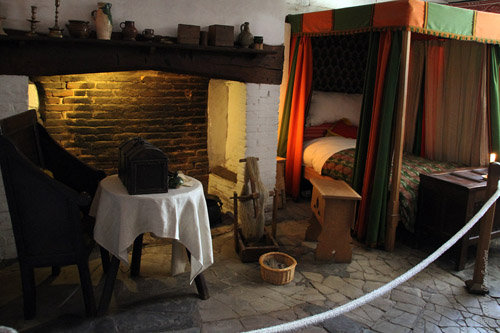 Shakespeare’s Birthplace: The parlor on the ground floor, where the young Shakespeare would have grown up and where his parents would have entertained guests 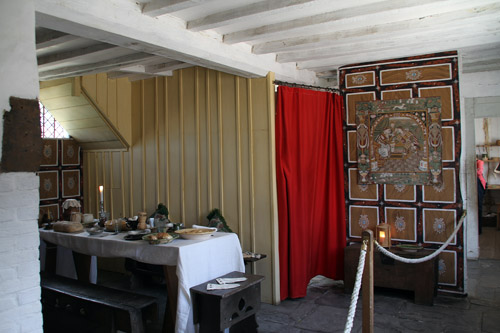 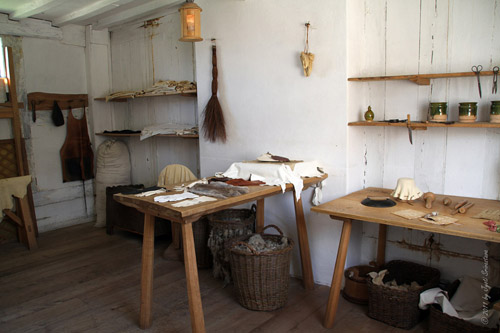 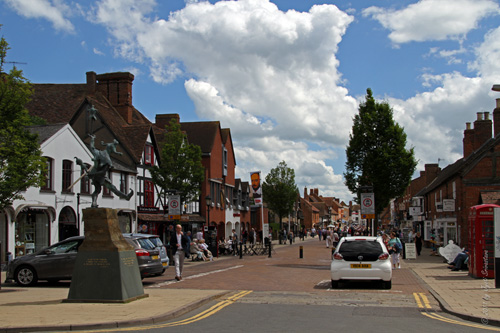 Henley Street, Stratford-Upon-Avon, with the Jester sculpture to the left. 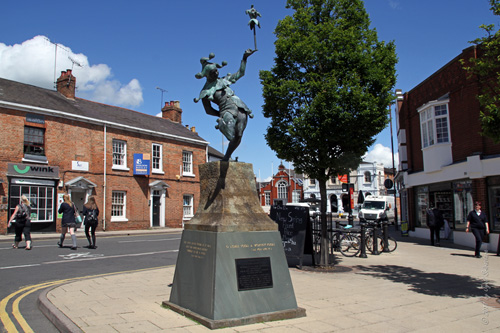 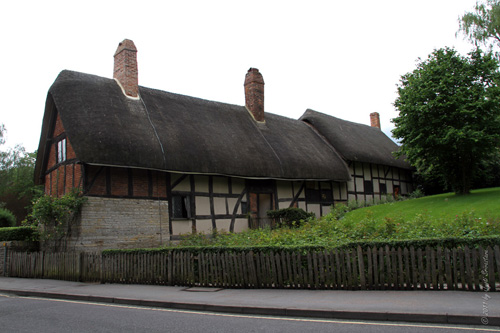 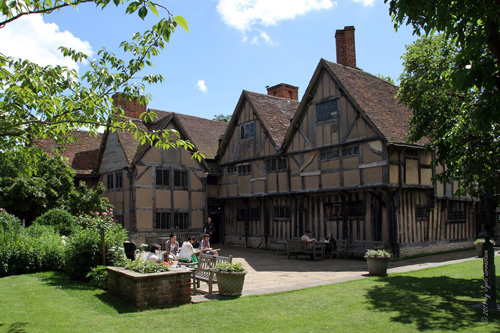 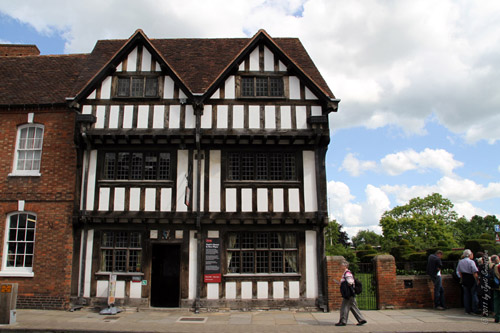 TOWN WALK:
Other places related to Shakespeare in the town. 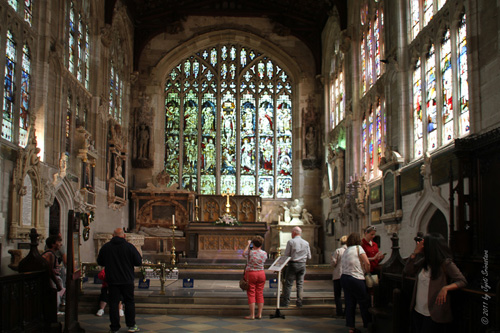 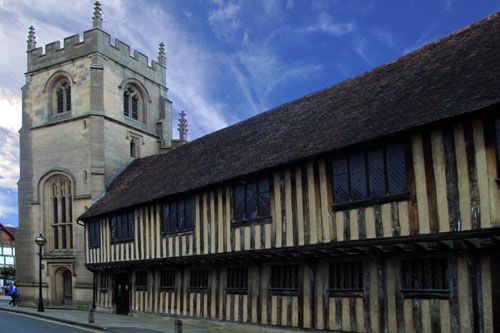