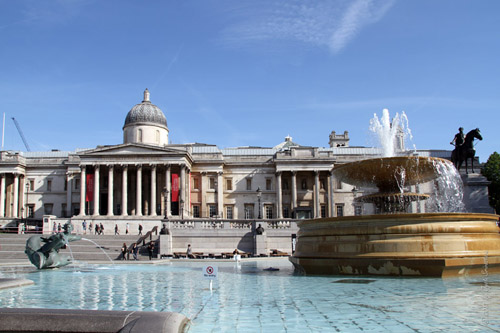 My priority in London was visiting the Trafalgar Square! A public space in the heart of London, it is one of the city’s most vibrant open spaces.

The name commemorates the Battle of Trafalgar, a  British naval victory of the Napoleonic Wars over France and Spain which took place on 21 October 1805 off the coast of  Cape Trafalgar, a town in Cadiz, Spain. The original name was to have been King William the Fourth’s Square”, but later named as the “Trafalgar Square”. 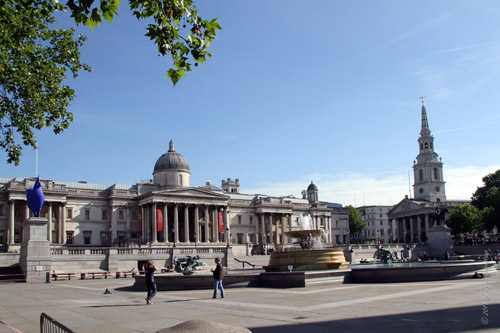 Trafalgar Square: Where are the pigeons?

Trafalgar Square: Where are the pigeons?
The first thing that struck me was, No Pigeons!! Where were the pigeons? Trafalgar Square was famous for feral pigeons, and feeding them was a popular activity. The birds presence was contentious. But since July 2003, former London mayor Ken Livingstone introduced Harris hawks to control the pigeons of Trafalgar Square. The Harris Hawk, native to the southern states of the U.S. and north Mexico, is said the perfect bird for this type of work. 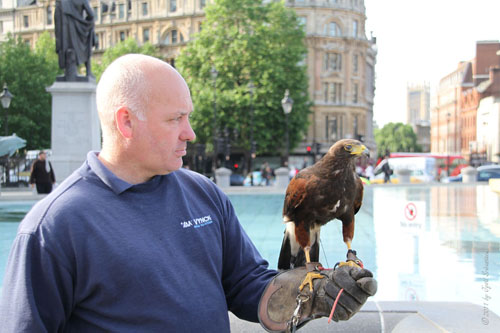 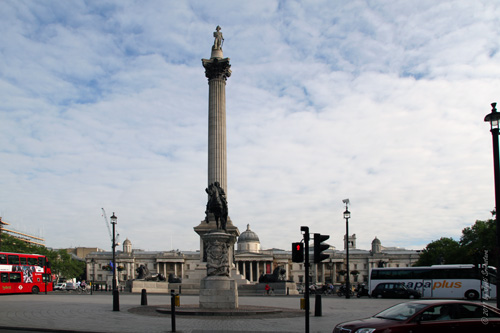 Most of the information about the Trafalgar Square from the website of Greater London Authority..London.Gov.UK… click here..

NELSON’s COLUMN
William Railton designed the column and statue to honour Admiral Nelson (1758-1805), following his victory in the Battle of Trafalgar in 1805. The granite statue was sculpted by E. H. Baily. It is five metres high and stands on a bronze platform made from old guns from the Woolwich Arsenal Foundry.
The four bronze panels at the base of the column depict some of Nelson’s naval victories at Cape of St. Vincent [1797], Copenhagen [1801], The Nile [1798] and Trafalgur [1805]. The castings are from guns captured from the French fleet.
The lions, designed by Sir Edwin Landseer, are said to protect Nelson’s Column.
Nelson’s Column last underwent restoration in 2006. 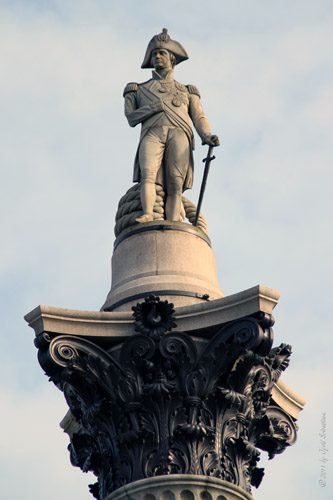 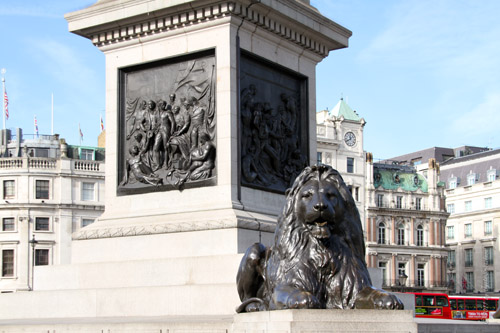 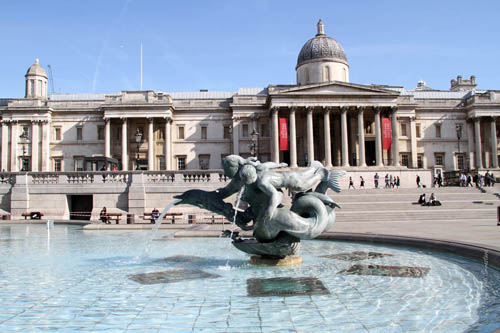 Fountains – by Edwin Lutyens
Mermaids, Tritons and Dolphis – by McMillan and Wheeler
The fountains, designed by Edwin Lutyens were added in 1845.  The sculptures with mermaids, tritons and dolphins were installed later. The two fountains are positioned towards east and west ends of the public square.  At the time the fountains were intended to simply take up space in Trafalgar Square, so that there would be less space available for demonstrators and rioters.

In 1935 plans were approved by parliament to add sea-creature sculptures to the fountains by McMillan and Wheeler. The bronze statues were completed in 1939, but due to the war all work on Trafalgar Square was suspended at that time.  Work on this did not resume until after the war in 1947. The finished memorials and the fountains were unveiled in October of 1948. The mermaid statues do not have the traditional single tail, but instead have long and powerful tails as an extension of each thigh.

Statues:
The PLINTHS: There are four plinths for statues in the square. Bronze statues stand on three of them: General Sir Charles James Napier is on the plinth in the southwest of the square, Major General Sir Henry Havelock on the southeast plinth and King George IV on the northeast plinth.
THE FOURTH PLINTH: in the northwest of the square, was empty for many years. Since 1998 the empty plinth in the north-west corner – which has become known as the “Fourth Plinth” – has been used to show a series of specially commissioned artworks. The scheme was initiated by the Royal Society of Arts and continued by a Fourth Plinth Commission, appointed by the Mayor of London.
OTHER STATUES: There are three busts of admirals against the north wall of the square. Those of Lord Jellicoe by Sir Charles Wheeler and Lord Beatty by William MacMillan were installed in 1948 in conjunction with the square’s two fountains, which also commemorate the two men. A bust of the Second World War First Sea Lord Admiral Cunningham by Franta Belsky was unveiled alongside them on 2 April 1967.
On the south side of the square, on the site of the original Charing Cross, is a bronze equestrian statue of Charles I by Hubert Le Sueur. It was cast in 1633, and placed in its present position in 1678.
There are two statues on the lawn in front of the National Gallery: James II by Grinling Gibbons to the west of the portico, and George Washington, a replica of a work by Jean-Antoine Houdon, to the east. The latter, was a gift from the state of Virginia installed in 1921.

The National Gallery: The National Gallery is an art museum on Trafalgar Square in London. Founded in 1824, its collection belongs to the public of the United Kingdom and entry to the main collection is free of charge. It is the fifth most visited art museum in the world, after the Musée du Louvre, the Metropolitan Museum of Art, the British Museum and Tate Modern. 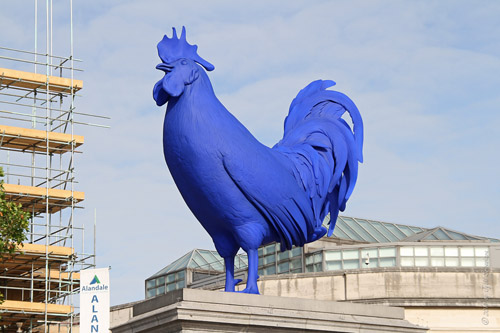 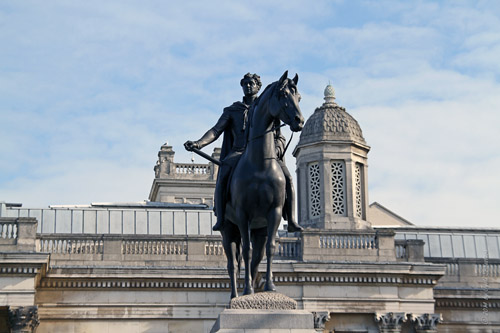 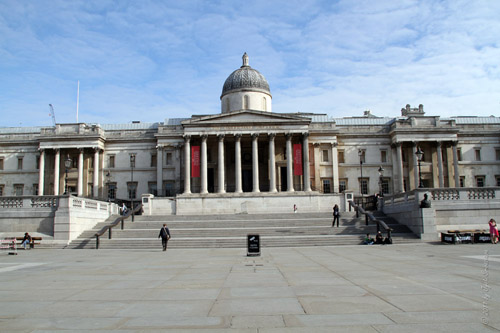