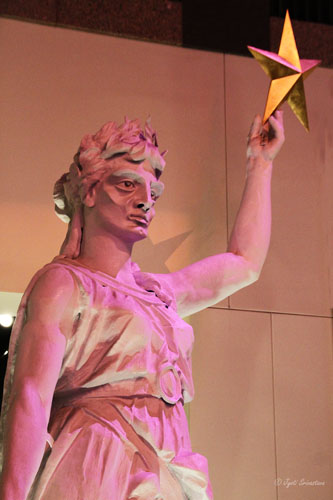 Vacation Notes: My first stop was a guided tour of the Texas State Capitol building. While at it, I learnt that the statue atop the building is of “Goddess of Liberty”,  and also, that it was a replica. The original statue is at the Bob Bullock State Museum.  Also overhear, in muted tone,  that a close up of the statue is not really as pretty. This absolutely piqued my interest and I had to see the original statue up, close and personal. Here are the images.. 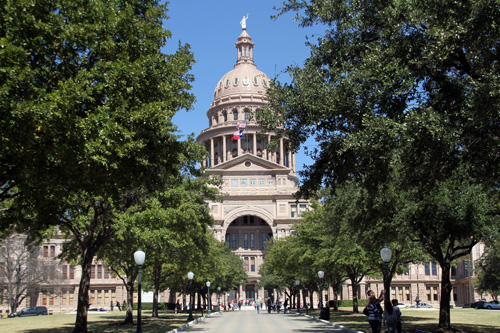 The Capitol State building was originally designed in 1881 by architect Elijah E. Myers. in the Italian Renaissance Revival style.
From the Bullock Museum’s official website..
E.E. Meyers included the Goddess in his original 1881 winning architectural plan for Texas’s fourth and final Capitol building, a feature consistent with the Renaissance Revival style of the Capitol and the widespread popularity of both the statue of Freedom in Washington, D.C. and the Statue of Liberty in New York. . 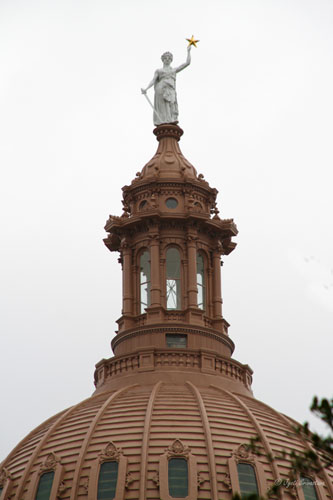 Goddess of Liberty atop the dome of Texas State Capitol building.

The Goddess of Liberty statue stands atop the Texas Capitol Building in Austin. The building is more than 300-foot tall [302.64 feet to be exact]. It is taller than the U.S. Capitol in Washington. It stands almost 15 feet taller than the 288-foot-high U.S. Capitol. [But Texans cannot claim the tallest capitol building in the country. That honor goes to Louisiana’s 450-foot tower in Baton Rouge]

Coming back to the statue of the Goddess of Liberty, a practical explanation to her unusual harsh appearance, has been that most likely, it was an attempt to make the feature visible to those more than 300 feet below.

The statue atop the Capitol building is a replica. The original is at the Bullock Texas State History Museum. Images of the original statue are below.. 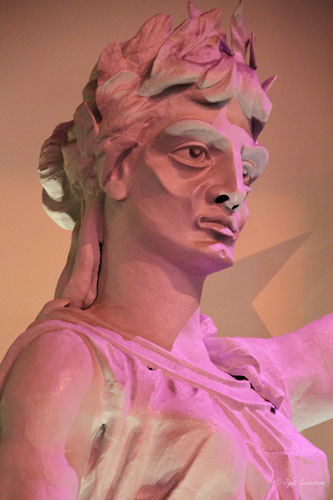 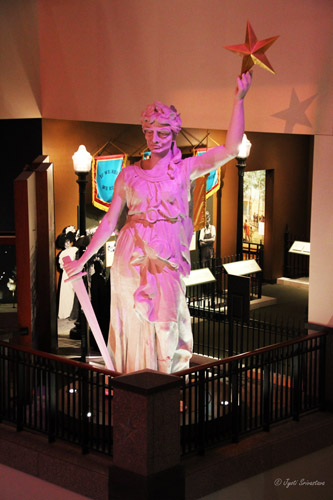 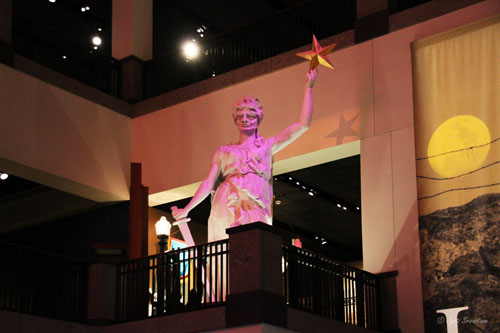 The Statue of Freedom – by Thomas Crawford, US Capitol Bldg, in Washington D.C.
Statue of Liberty – by Frédéric Auguste Bartholdi in New York City, New York. 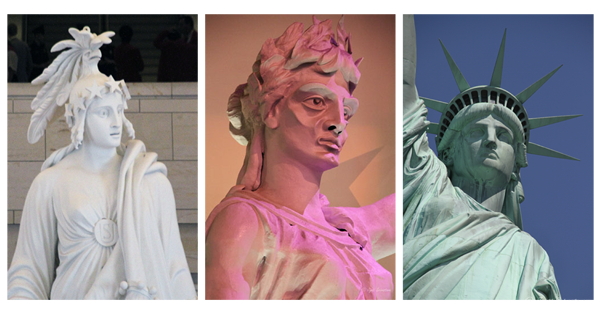 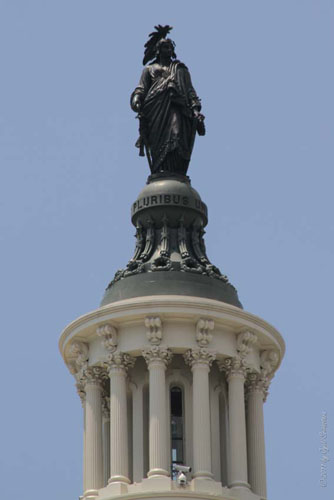 The Statue of Freedom, by Thomas Crawford 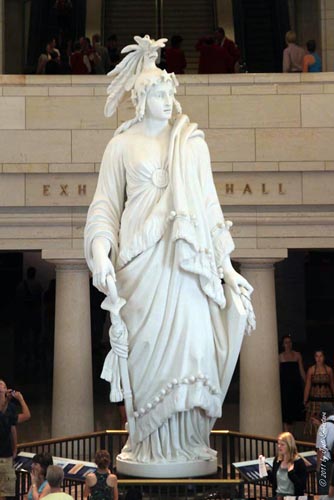 The Statue of Freedom, by Thomas Crawford [plaster model at display] 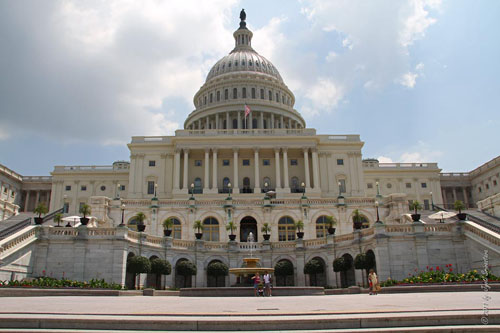 The Statue of Freedom, by Thomas Crawford atop the US Capitol Building, Washington DC. 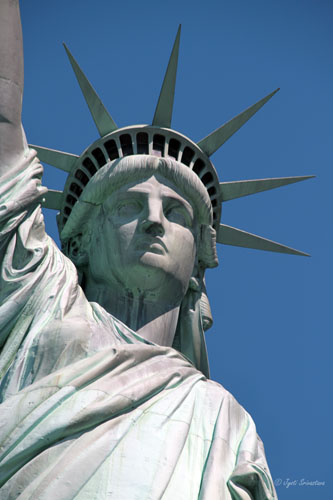 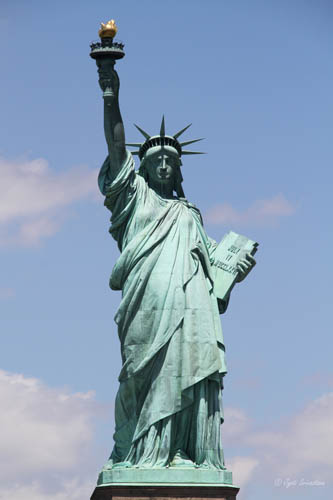 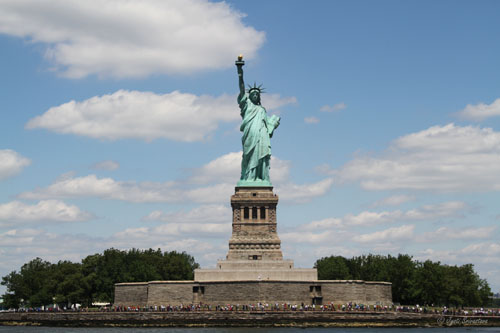 More on the Goddess of Liberty atop Texas State Capitol building in Austin. 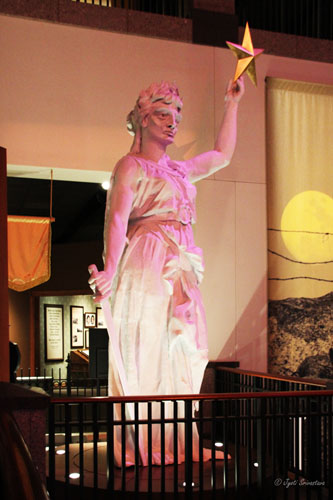 More about the sculpture from the Bullock State Museum website..
While the sculptor is unknown, the plaster molds likely came from John C. McFarland of Chicago, the subcontractor for the iron and zinc work found in the Capitol. She was cast in a makeshift foundry situated within the unfinished Capitol. Weighing in at over 2,000 pounds and at a height of nearly 16 feet, her construction was no small matter. She was assembled, given a few coats of white paint mixed with sand to resemble stone, and poised for a photo-shoot on the Capitol grounds.  Afterward she was disassembled into four sections — the head, arms, and torso — in order to be hoisted atop the dome and fastened with several large iron screws in February of 1888.

In the late 1920s or early 30s, and perhaps motivated by her harsh features, she was transformed into a “real lady.” Her hair was painted black, flesh pink, dress blue, and her sash a bright golden hue. Whatever the reason, this Technicolor aberration didn’t last and she was restored to her original white coloring in the 1930s. One of the lesser known facts about the Goddess is that a time capsule was placed in the gilded bronze lone star she holds high, which contained a local German newspaper and a few calling cards. The pieces had turned to pulp from exposure to the elements over the years, but were preserved by the conservation team at the Ransom Center at the University of Texas at Austin.

The Goddess stood proudly for nearly one hundred years before signs of cracking were evident. In November of 1985, with the help of the Texas National Guard, the State Preservation Board removed her from the top of the Capitol for restoration. An exact replica made of aluminum and weighing 1,000 pounds less was cast from the original molds. Though the replica was lighter, placing her on the Capitol dome was no easy feat. With the help of the Mississippi National Guard’s rare “skycrane” helicopter — which allowed the pilot a direct view of the target location — she “flew” her way atop the dome on June 14, 1986.

The statue was moved to the Bullock Museum on September 18, 2000. However,  again her size became an issue.  Because she was too large to fit through the doors, she was placed inside the Museum very early during construction. The Museum was literally built around her.