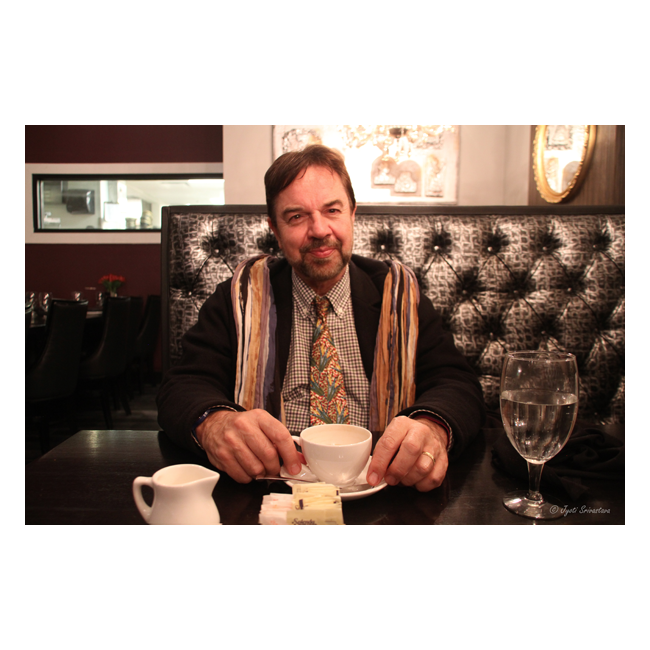 Art historian Rolf Achilles is not only a well known public figure in Chicago, but is internationally recognized for his efforts in documentation and preservation of our cultural heritage. He is Adjunct Associate Professor [Historic Preservation] at School of Art Institute of Chicago [SAIC], board member of Driehaus Museum in the Nickerson Mansion, Glessner House, Hegeler Carus Mansion, All Arts Foundation, Partners for Sacred Places; Steering Committee of Farnsworth House; Honorary Freeman at Worshipful Company of Glaziers and Painters of Glass, London [UK]; Contributing member of Chicago Art Deco Society; and Chairman of Chicago-Hamburg Sister City Committee. He was bestowed the honor of Freedom of the City of London in 2013. He has authored about 15 books, and has also developed and maintains the Chicago History TimeLine on www.rolfachilles.com

Early this year, in spring, I had sat down with Rolf Achilles over coffee to discuss his interest in stained glass windows. His constant research on the topic of art glass, and involving the public in the discussions through speeches, writing, photographs and even the use of social networking sites, have all contributed to bringing this almost exclusive art form, in the sphere of general public dialogue. However, over time, I learned that his other interests as an art historian and preservationist and wanted to talk to him about his involvement with some of his recent projects. This Tuesday, Nov 18, 2014, we sat down at India House and had a very informal talk, especially about two of his projects: one involving Macedonia and the other about German Spritzdekor [air brushed] ceramics. Then some other topics came up. 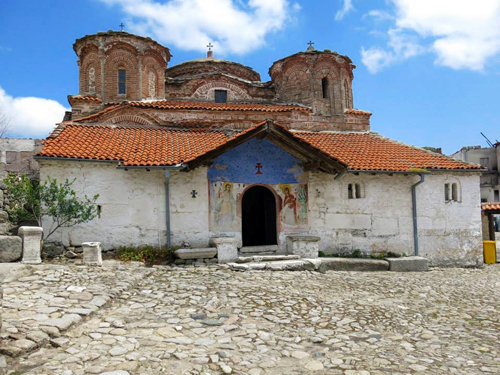 Preservation and Awareness of Macedonian cultural heritage.
One of Rolf Achilles efforts has been in preservation and creating awareness of the cultural, historical and architectural treasures of Ottoman and Byzantine empires, with special focus on preservation of monasteries and churches of Macedonia. He is working in close association with Pance Velkov, who in charge of evaluation and promotion at the “Makedonida” cultural heritage association. Macedonia has about 200 monasteries and many of these are in ruins. Most of these are located in stunning landscapes and are replete with incredible frescoes and wood-carvings which reflect their rich and multi-faceted historical legacy. But these are facing years of neglect and are in dire need of conservation. Macedonia does not even have an up-to-date list of cultural monuments that are in danger. The National Conservation Centre last updated the list in 1996.  Talking about the  deteriorating frescoes at the St George Church in Staro Nagoricane,   Professor Achilles had complained to the daily Nova Makedonija [August, 2010]  “How will you explain this to the tourists? When they see the state of the frescoes in the church, they will get the impression that the whole country is falling apart”. He wrote to the US embassy about the official negligence in preservation of the church and the embassy granted $650,000 to save the church.  Raising awareness about the necessity of preserving the cultural heritage of Macedonia is one of Rolf Achilles’ ongoing projects. 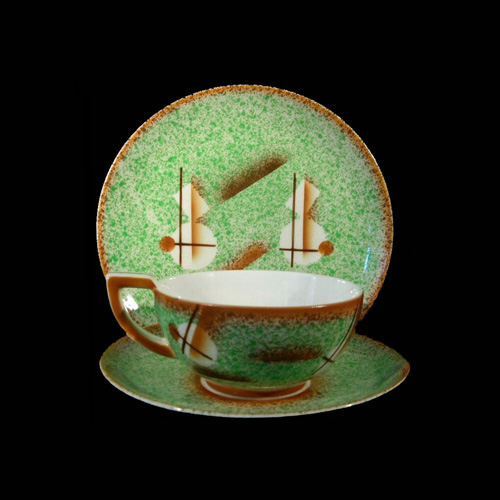 German Spritzdekor [air brushed] ceramics of late-1920s to the mid-1930s
Another off-beat interest of Rolf Achilles is the decorative art of German Spritzdekor [air brushed] ceramics of late-1920s to the mid-1930s.  The above image is a fine example of an early Art Deco / Bauhaus era German “Spritzdekor” [airbrush] plate with abstract modernist airbrushed and handpainted design.  The most creative time in the airbrush period,  was the late 20th and early 30th of the Art Deco era. It was mainly influenced by the Russian  Functionalism and Constructionsm.  The air-brush abstract ceramics were very different from the detailed-painted ceramics of the earlier era.  Nazi officially declared all modern art including Spritzdekor decoration  as Degenerate Art [Entartete –  not to be called art].  By 1937, the concept of degeneracy was firmly entrenched in Nazi policy. Such art was banned on the grounds that it was un-German and the artists were subjected to sanctions.  A large number of ceramics with geometrical decor were destroyed.  There is not that much literature available  about airbrush ceramics. Through his essays and photographs, Rolf Achilles has documented many of the surviving German air-brush ceramics.  His essay on  German ceramic designer Eva Stricker-Zeisel was published in Chicago Art Deco  Magazine, in Fall 2012. 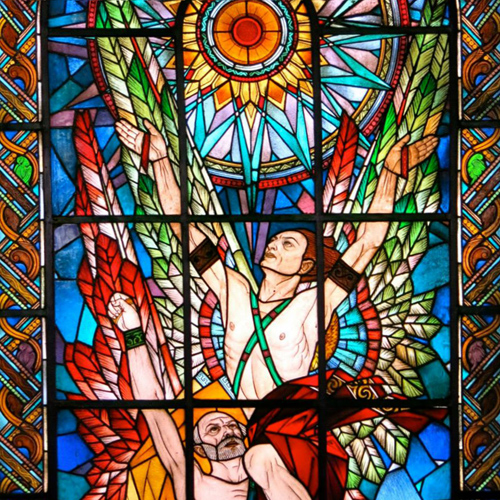 Stained Glass Windows
Although his interest in the preservation of Macedonian cultural heritage or in German Spritzdekor ceramics is somewhat lesser known to people, but everyone knows about his interest in Stained Glass Windows. In his extensive foreign trips, he has always photographed various styles of stained glass windows and delighted us with the images. His interest in art glass began in his trip to Lyon, a old town in east-central France. The city is known for its historical and architectural landmarks and is a UNESCO World Heritage Site. On his trip, he saw a group of tourist photographing stained glass windows in the Lyon cathedral. This intrigued him and from here begins his quest for learning about the decorative art of stained glass windows. Interestingly Chicago has a rich history of stained glass windows. But it has not got its due place in the discussions on art and architecture of the city.  One major setback came this year with the closure of the Smith Museum of Stained Glass Windows at the Navy Pier. Rolf Achilles was the curator of this unique free-for all museum where about 150 windows were displayed at eye-level for people to observe closely, what we normally see in the high walls of churches and cathedrals. It was one of Chicago’s hidden jewels.. click here. Its closure has been a tremendous loss to the city. However, some beautiful American Victorian Stained Glass can be seen at Macy’s Pedway, also curated by Rolf Achilles.. click here.. 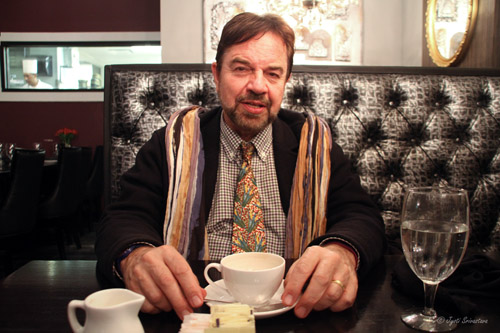 Our long informal conversation meandered over a range of topics especially related to the cultural institutions of Chicago. He talked about the genius of singer, song-writer, visual Chicago artist Wesley Willis. Another topic that came up was of Chicago Imagists and the recently opened Ed Paschke museum. At various points we talked about the iconic status of Chicago’s Picasso sculpture, the stunning location of Calder’s Flamingo, and the overpowering experience of standing at the foot of Hancock Center. 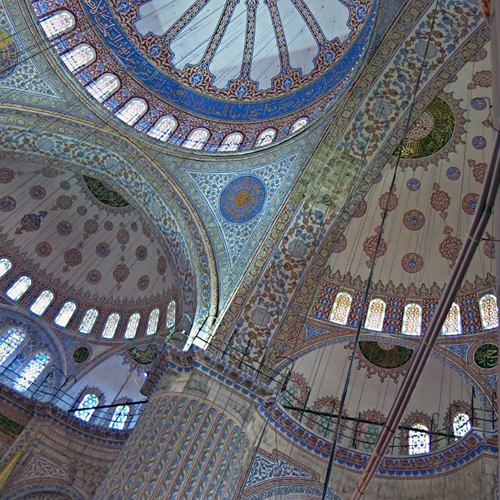 Having travelled all over the world, I had to ask about his favorite city. It is Istanbul, Turkey! Here is layers of history, art, architecture and good food! There are ancient monuments, dating back to Roman, Byzantine, and Ottoman periods, including the Hagia Sophia, Sultanahmet Mosque (Blue Mosque), and Basilica Cistern. There are beautiful frescoes and mosaics. Hagia Sophia – a church, then mosque and now a museum – is one of the most enchanting places. He maintains that in his observation, where there is good architecture, there is always good food. Istanbul is no exception, with its rich Turkish cuisine!

Thank you Rolf for your time! Although it was a very informal talk, but I got to know you better.

One quote will stick with me. I am paraphrasing here.. For preservationist who work 9-to-5 job, there are people who want to destroy our art, architecture and cultural heritage 24/7. That’s a wake-up call for preservationists. That also underlines his commitment to documenting and highlighting the cultural treasures he has seen all over the world.

I have also to write about the great food at India House, without which the talk wouldn’t have been as much fun!