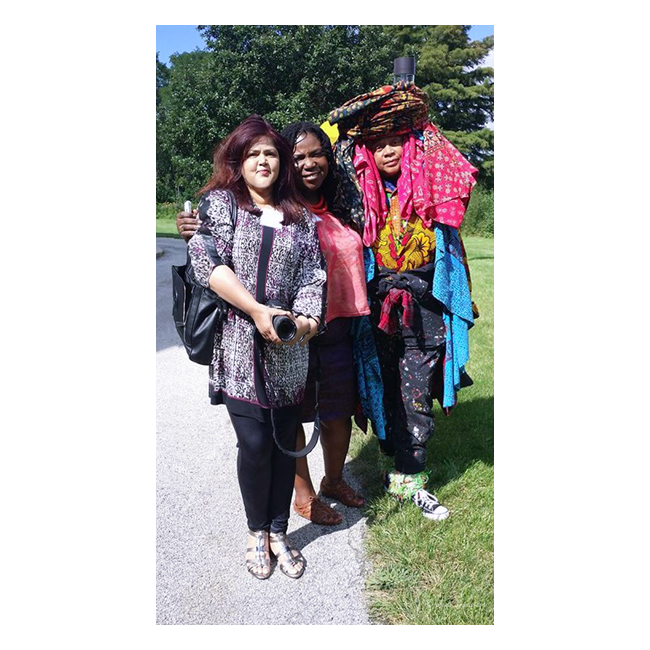 Above Image: Sculptor Chakaia Booker, Deputy Commissioner DCASE Tracie D. Hall and me.
Where DCASE is Department of Cultural Affairs and Special Events, City of Chicago.
Photo by Jeff Stevenson, who works at the Nathan Manilow Sculpture Park.

One of the most beautiful sculpture parks, is the campus of Governors State University [GSU], the Nathan Manilow Sculpture Park , with about 30 outdoor large scale monumental sculptures. GSU was formed in 1978. The sculpture park predates GUS, in that the sculptor Mark di Suvero spent the summers of 1968 and 1969 living and building the sculpture, “Yes! for Lady Day”  on this land that later become the university. However, the park was formally named as the Nathan Manilow Sculpture Park only in 1978 by the GSU Board of Trustees. 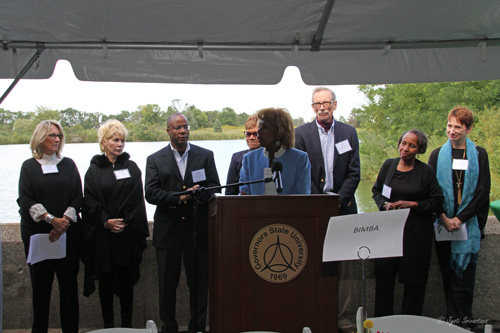 Jacqueline Lewis, President, Board of Nathan Manilow Sculpture Park.. standing are other Board members.

We have here a concept, vision and strategy of living in the midst of art. Yes we want all our students, faculty and staff to go to museums and take advantage of the great cultural setting that we have in Chicagoland. But, we also want everyone, no matter what the student major, no matter what the employee job, to understand the inspiration of having art around us…. We have here this amazing sculpture park, which is our campus. Our campus is our sculpture park, our sculpture park is our campus. Its one and the same thing!.
– Elaine P. Maimon, Ph.D.[President, Governors State University].

There is three-fold mission of the park: education, exhibition & acquisition and conservation. We provide here the chance to experience exceptional work of art, by men and women who have distinguished themselves in the field of sculpture. We will shortly travel out in the prairie, where art and nature have been woven into a seamless transition.
– Geoffrey Bates [Director and Curator of Nathan Manilow Sculpture Park]. 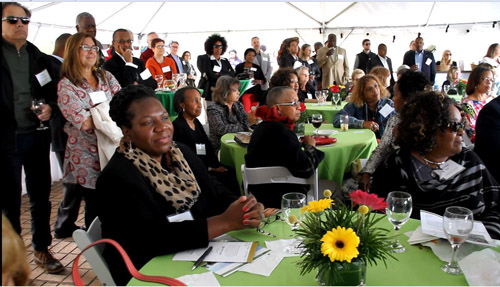 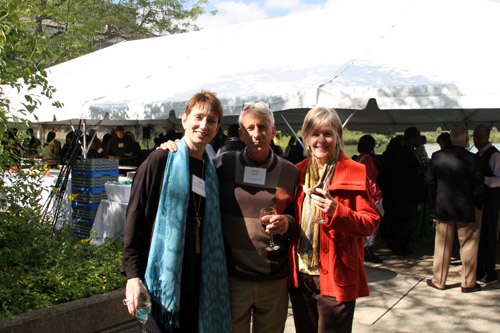 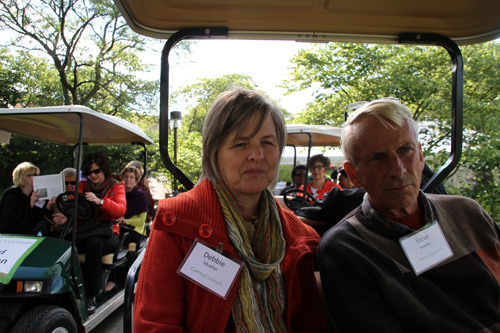 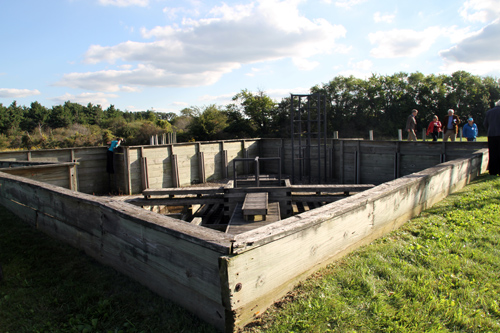 Field Rotation [1981] – by Mary Miss, is a 3.5 acres landscape made of wood and steel. it was commissioned by the Governors State University Foundation. Miss Mary has a major contribution to the Earth Art movement in the US. She incorporates elements of landscape in their sculptural compositions. Another example of this approach, also in the Nathan Manilow Sculpture Park, is the Martin Puryear’s Bodark Arc. The sculpture incorporates many historical references to world cultures, including mound building of Native American Cahokia in southern Illinois and the perimeter outline of 18th century military European fortification plans. 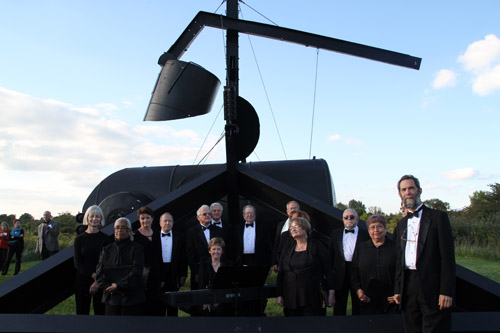 Yes! for Lady Day [1968-69] – by Mark di Suvero. The evening was marked by superb performance by the Chorale singers, seen here in front of the sculpture.

This year marks the 45th Anniversary of the creation of “Yes! for Lady Day”,  a Mark diSuvero’s expressive 1969 masterwork. The title of this work refers to Billie Holiday, one of the great jazz vocalist of the Mid-20th century. The sculpture was created over a period of two summers while di Suvero lived in a farmhouse which was loaned by Lewis Manilow, a prominent Chicago collector and philanthropist. The site became a gathering place for local sculptors – John Henry, Richard Hunt, John Chamberlain and others – spent time, and it later became the GSU campus. Yes! For Lady Day was constructed of salvaged steel I-beams and a railroad tank car that was cut at a diagonal ellipse by the artist.  Di Suvero is one of the United States’ most highly regarded sculptors and arts activists. In 2010, he was awarded the National Medal of Arts by President Barack Obama.  His style reflect early practice  of abstract expressionist movement. As against the sculptures in the 60s, his work were not figural or representation of something. They were not volumes that sat on pedestal. They were drawings in space!  His work is also known for being kinetic, and it is the viewers participation that completes the work. DiSuvero’s distinctive approach has created this poetic beauty that dances in the prairie breeze.

One of the main highlights of the evening was the solo exhibition series, “Don’t Tread on me” – by special guest artist Chakaia Booker. This is the 4th in the Solo Exhibition Series presentation at the Nathan Manilow Sculpture Park. Since their inception in 2009, these presentations of exceptional artwork by nationally and internationally recognized artists have been generously supported by BMO Harris Bank. The first of the solo exhibition series was 12-figure installation “Horizons” by Icelandic sculptor Steinunn Thorarinsdottir [2009]. This was followed by “Neil Goodman in the Park” [2011] and Sophie Ryder’s “Upside Down, Kneeling” [2012].

The 4th solo exhibition, “Don’t Tread on Me: Sculpture by Chakaia Booker” [2014] consists of three outdoor pieces: Serendipity [1998], Meeting Ends [2005] and What’s Not [2009]. These works from different times in her career suggests her creative range. Chakaia Booker is best known for her work with discarded automobile tires, which she cuts into pieces of varying length, width and shape – and fastens onto wooden or metal armatures. She builds indoor and outdoor sculptures raning in scale from intimate wall pieces to large public works. 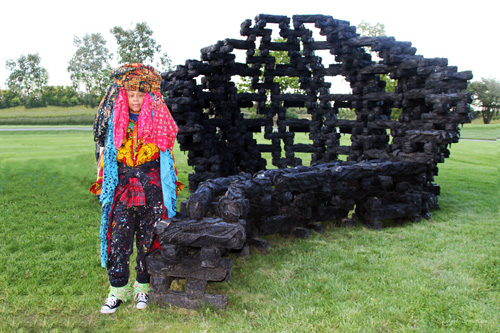 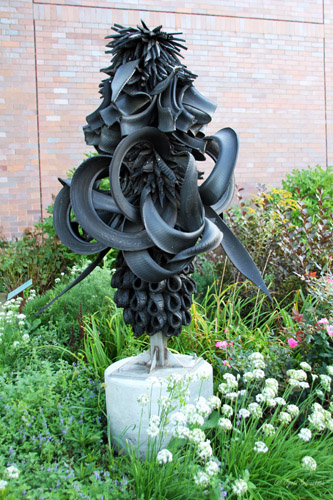 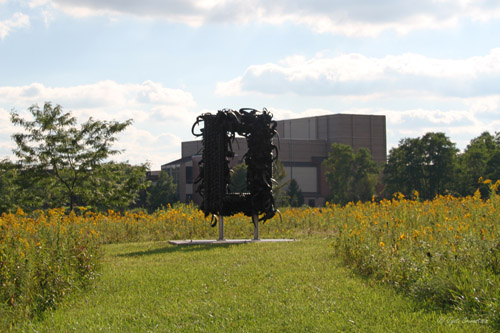 What’s Not – by Chakaia Booker 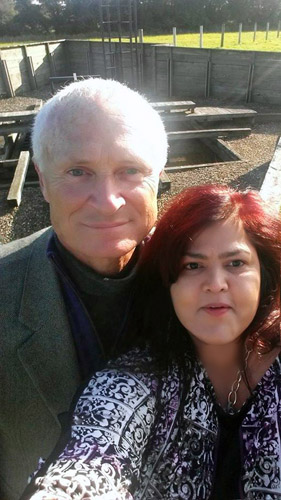