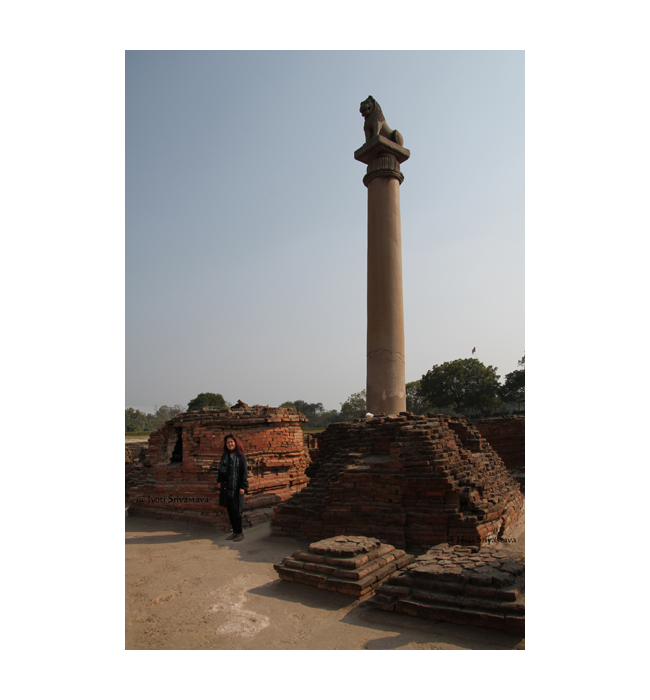 Vaishali today is a small village surrounded by banana and mango groves as well as rice fields. But excavations in the area have brought to light an impressive historical past.

FIRST REPUBLIC: It was the capital city of the Vajjian Confederacy of Mithila (Vrijji mahajanapada), considered one of the first examples of a republic in the world, around the 6th century BCE.

The epic Ramayana tells the story of the heroic King Vishal who ruled here. Historians maintain that one of the world’s first democratic republics with an elected assembly of representatives flourished here in the 6th century B.C. in the time of the Vajjis and the Lichchavis. And while Pataliputra, capital of the Mauryas and the Guptas, held political sway over the Gangetic plain, Vaishali was the center for trade and industry.

Vaishali derives its name from King Vishal of the Mahabharata age.

Vaishali is an important pilgrim center for both Buddhists and Jains.

Lord Buddha visited Vaishali frequently and at Kolhua, he preached his last sermon and announced his Parinirvana, and informed his disciples about his impending Mahaparinirvana and his desire to go to Kushinagar. Emperor Ashoka, in the third century B.C. erected one of his famous lion pillars here. It is one of the best-preserved of the Pillars of Ashoka, topped by a single Asiatic lion. A hundred years after the Mahaparinirvana of the Buddha – Vaishali hosted the second great Buddhist council. Two stupas were erected to commemorate this event: Anand Stupa and Licchavi Stupa [Buddha’s Relic Stupa].

Vaishali is also renowned as the land of Amrapali, the great Indian courtesan, who appears in many folktales, as well as in Buddhist literature. Amrapali became a disciple of Buddha. Manudev was a famous king of the illustrious Lichchavi clan of the confederacy, who desired to possess Amrapali after he saw her dance performance in Vaishali.

Jainism, too, has its origins in Vaishali. It was here in 599 BCE the 24th [and last] Jain Tirthankara, Bhagwan Mahavira was born and brought up in Kundalagrama in Vaishali republic. He lived in Vaishali till he was 22. This makes Vaishali a pious and auspicious pilgrimage to Jains.

The city finds mention in the travel accounts of Chinese explorers, Faxian (4th century CE) and Xuanzang (7th century CE), which were later used in 1861 by British archaeologist Alexander Cunningham to first identify Vaishali with the present village of Basrah in Vaishali District, Bihar. 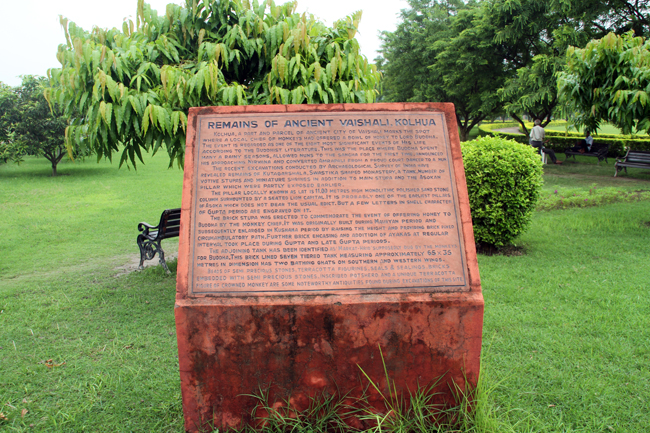 Kolhua, a part and parcel of ancient city of Vaishali marks the spot where a local chief of monkeys had offered a bowl of honey to Lord Buddha. The event is regarded as one of the eight most significant events of his life according to the Buddhist literature. This was the place where Buddha spent many a rainy seasons, allowed nuns to the Sangha for the first time, announced his approaching Nirvana and converted Amrapali from a proud court dancer to a nun.

The recent excavations conducted by Archaeological Survey of India have revealed remains of Kutagarshala, Swastika shaped monastery, a tank, number of votive stupas and miniature shrines in addition to main stupa and the Asokan Pillar which were partly exposed earlier.

The pillar locally known as “Lat” is 11.00 metres high monolithic polished sand stone column surmounted by a seated lion capital. It is probably one of the earliest pillars of Asoka which does not bear the usual edict. But a few letters in shell character of Gupta period are engraved on it.

The brick stupa was erected to commemorate the event of offering honey to Buddha by the monkey chief. It was originally built during Mauryan period and subsequently enlarged in Kushana period by raising the height and providing brick paved circumambulatory path. Further brick encasing and addition of Ayakas at regular interval took place during Gupta and late Gupta periods.

The adjoining tank has been identified as ‘Markat-Hrid’ supposedly dug by the monkeys for Buddha. This brick lined seven tiered tank measuring approximately 65 x 35 metres in dimension has two bathing ghats on southern and western wings. 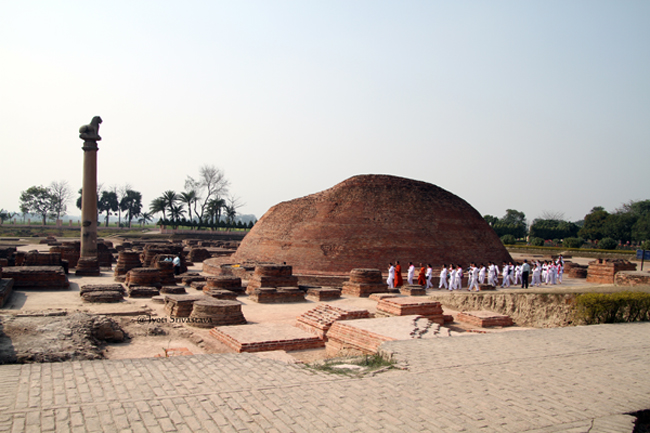 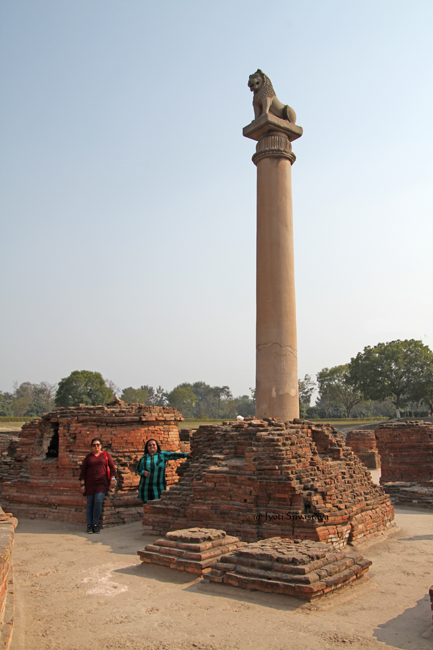 Ashokan Pillar – One of the best-preserved of the Pillars of Ashoka, topped by a single Asiatic lion./ Kolhua, Vaishali, Bihar. 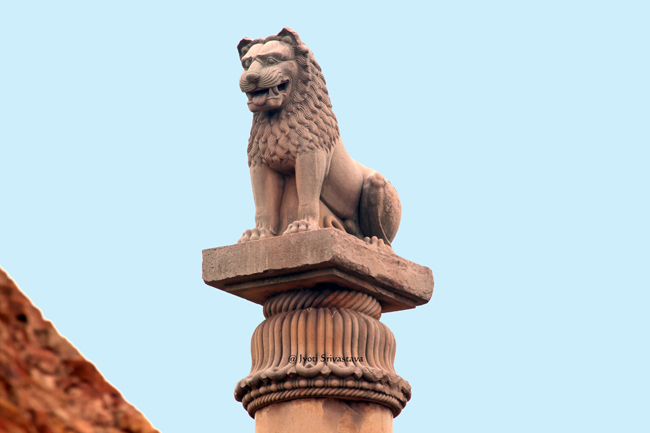 Ashokan Pillar – One of the best-preserved of the Pillars of Ashoka, topped by a single Asiatic lion. / Kolhua, Vaishali, Bihar. 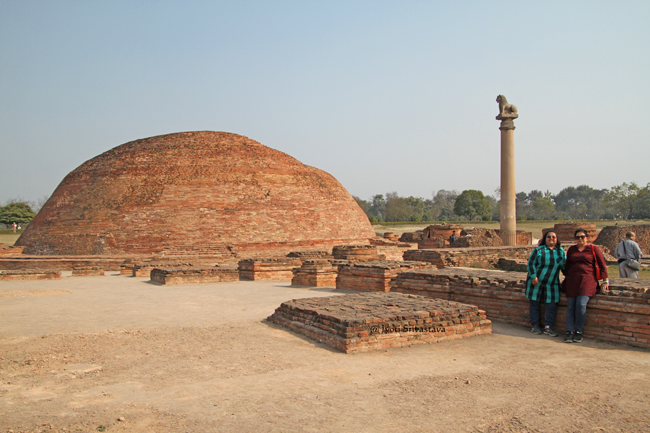 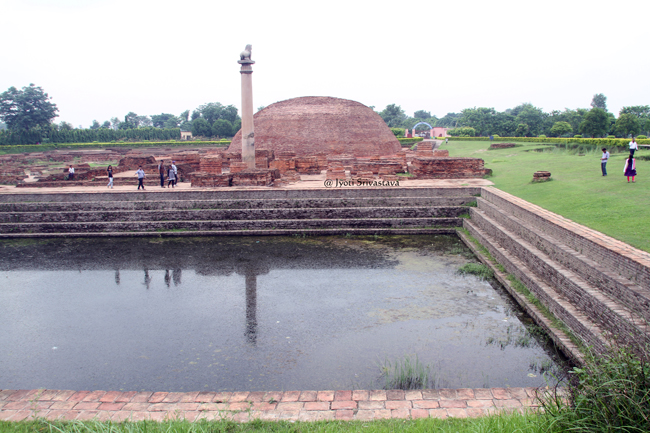 In stories of Buddhism it is mentioned that a band of monkeys dug this tank for Lord Buddha for his convenience during his extended periods of stay at Kutagarshala Vihara. They also offered him bowls of honey out of love and respect. This brick lined seven tiered tank measuring approximately 65 x 35 metres in dimension has two bathing ghats on southern and western wings. 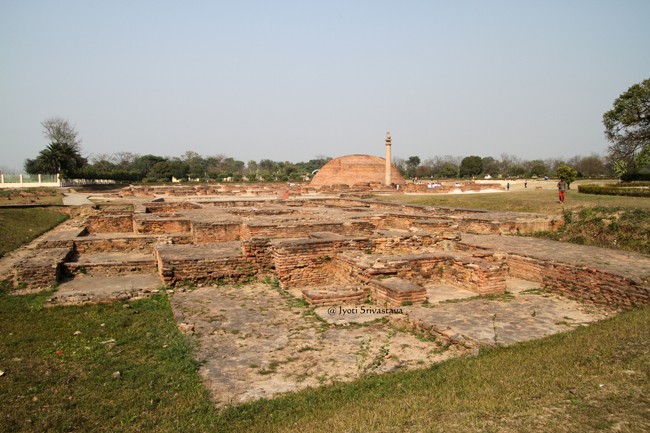 The Kutagarshala represents the spot were Buddha used to stay during the rainy seasons spent at Vaishali. Excavation have exposed three phase of its construction. Originally it was a small chaitya built during Sunga-Kushan period. Subsequently it was enlarged to a lofty temple in second phase during Gupta period. And finally in the third phase the temple was converted into a monastery by providing a number of partition walls during post Gupta period. 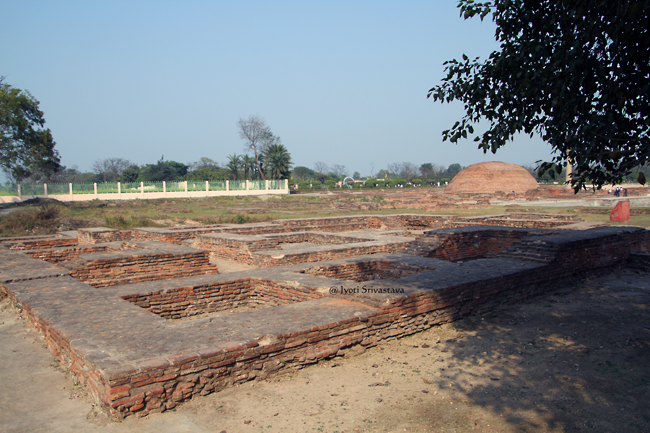 Swastika shaped Monastery.
12-room monastery, looks like a swastika. It was constructed during the Gupta period for the nuns. 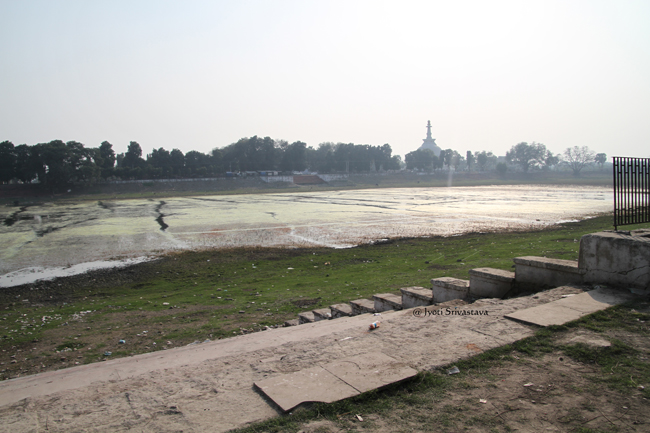 A few hundred meters from the Relic Stupa is Abhishek Pushkarini, the coronation tank. The sacred waters of the tank anointed the elected representatives of Vaishali. 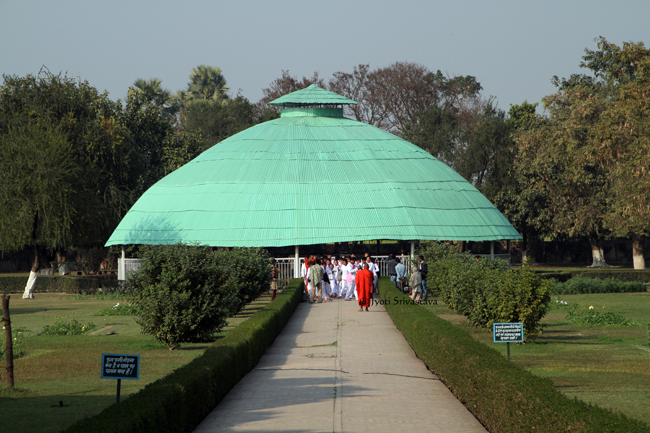 A little North East to the museum lies the small but very important original Buddha’s relic stupa. This Stupa is one among the eight original stupas built over the corporeal remains of Buddha. According to Buddhist traditions, after attaining Mahapariniryana, his body was cremated by the Mallas of Kushinagar with royal ceremony befitting a universal king and the mortal remains were distributed among eight claimants including the Lichhavis of Vaishali. Seven others were Ajatshatru the king of Magadha, Sakyas of Kapilavastu, Bulis of Alakappa, Koliyas of Ramagram, A Brahmin of Vethoweep and Mallas of Pava and Kushinagar.

This was originally a small mud stups measuring 8.07 meters in diameter raised in 5th century B.C. Later during Maurya, Sunga and Kushan periods it was encased with bricks and enlarged in four phases which increased the diameter to 12.00 meters. The Ayaka projection noticed towards south and east is probably the earliest examples of Ayakapattas.

The relics were unearthed during archaeological excavations and now displayed in Patna Museum.  You need to make an extra payment of 100 rupees one can access a special to see it.