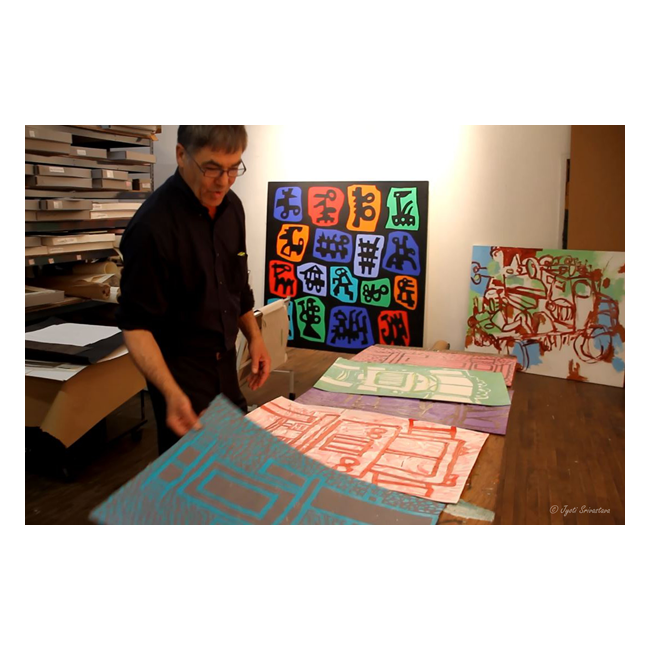 I almost have a word association with the name of John Himmelfarb. “Trucks”.  That’s the first word that comes to mind when I hear his name.  And it’s not without reasons.  Although meeting with John in his Studio, I realized that his artistic oeuvre is much richer.   It consists of  abstraction of all different kinds of figures and objects around us. But trucks do predominate his work.  He uses many mediums for his artistic expression, including drawings, paintings, prints and sculptures.  And I am posting many photos I took in his studio.

But before I move further, I have to Thank Steve Mueller of Vector Fabricating, not only for arranging for the studio visit, but also being there during the visit. John and Steve have been good friends for long. However, this was not the first time I was meeting John. I had met him earlier, at Vector when he was in the process of making sculpture “Honor” click here..  But this was the first time I visited his  Studio.  I always feel that workshop visits gives a closer and deeper understanding of an artist and their work. I even have to apologize for being extremely late. Probably it was the first time I was this late  [about 45 minutes late for the appointment].  In my defence, I did not start late from home.  But  encountered an unexpected traffic delay on I-290.  For quite sometime I was stuck in traffic moving at less than 10 miles per hour. Later I learnt there was  fire and multi-vehicle accident somewhere near Mannheim,  causing the traffic jam. Anyways,  once I was there is was all good.. So now images for the visit. 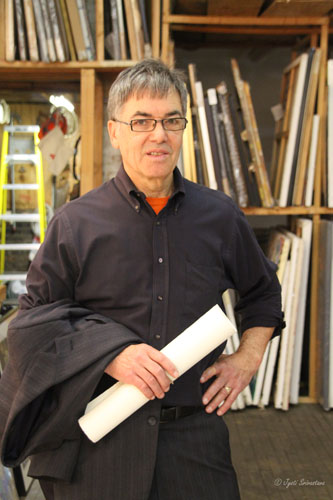 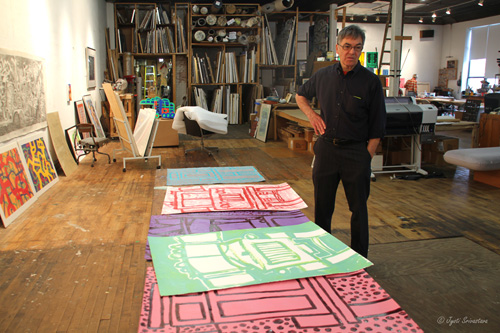 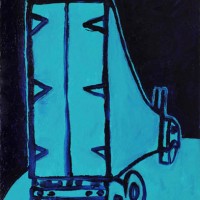 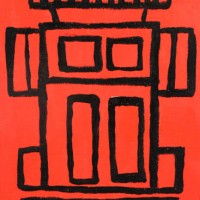 Puerto Vallarta Series:  Let me begin with one of his latest set of paintings. Recently [April, 2013] Himmelfarb was at a prestigious international, by invitation only, artist-residency at Puerto Vallarta, Mexico. There he produced a series of Truck paintings, which now are hanging on his studio walls. His website has more images from his Puerto Vallarta Series click here.. 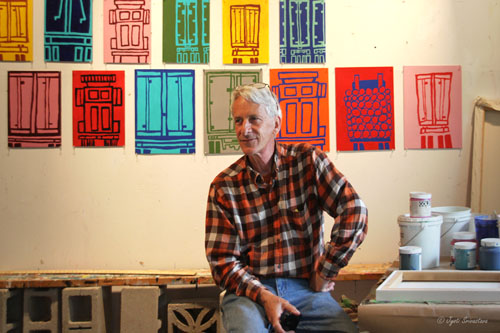 A very interesting trivia that I learned from Steve, is that John Himmelfarb is quite a dictionary man. 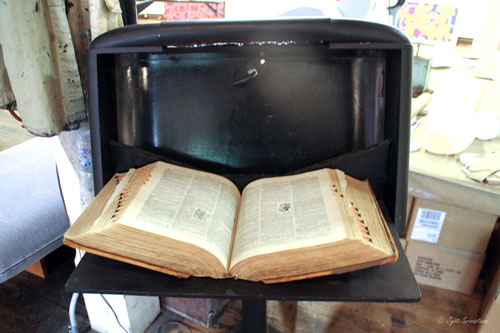 I believe the lithograph below, “Handbook II” is a hybrid of art and dictionary. 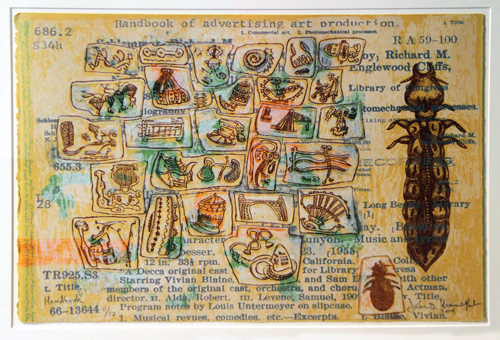 Not only Himmelfarb is a man of letters, his artwork sometimes resembles calligraphy, as seen in the image below. 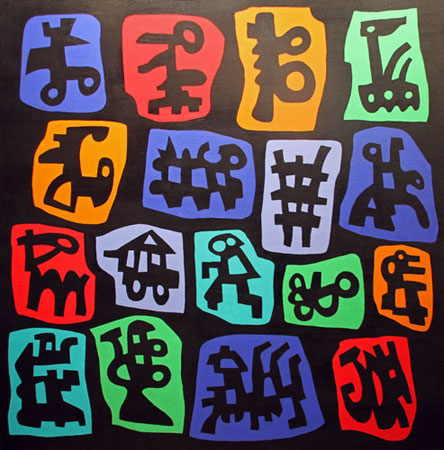 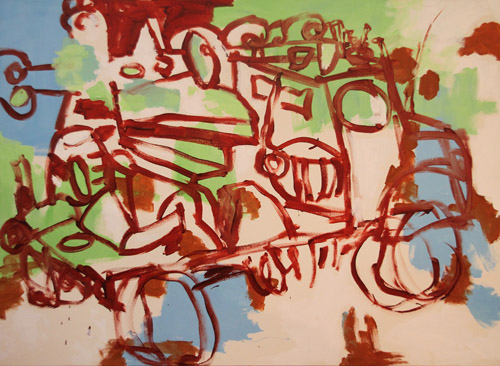 Trucks always stand out in his art, whatever medium he uses, drawing, paintings, prints or sculptures!!! 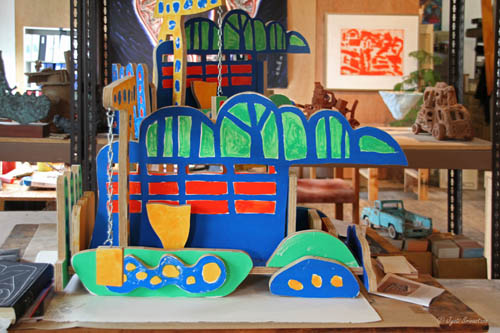 The Road to Herron – by John Himmelfarb

Road to Herron – by John Himmelfarb.
2012 / Silkscreen on paper mounted on blocks of wood 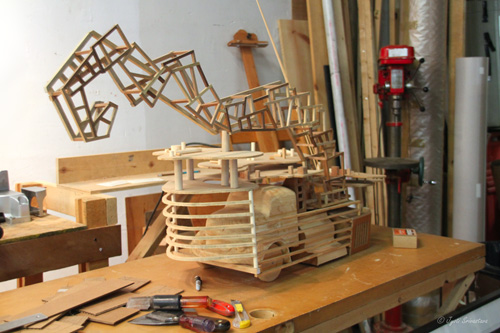 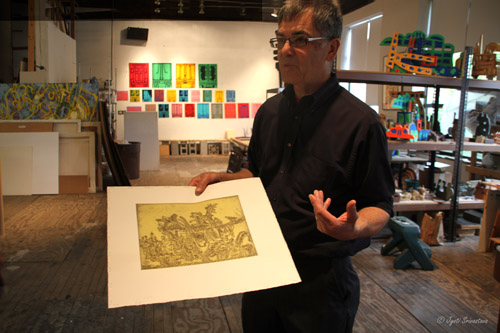 Lithorgaph, “Actor”,  by John Himmelfarn.
I got this wonderful souvenir for which I am extremely thankful and will cherish forever, click here..!
Thank You very Much!!

I first became aware of the name of John Himmelfarb, when I saw huis wonderful art the CTA Station at Kedzie, “Coast of Chicago”. He also has an installation at viaduct [53rd Street and Lake Park] which I have yet to see, but intend to see soon. It’s image can be seen at Himmelfarb’s website, click here.. 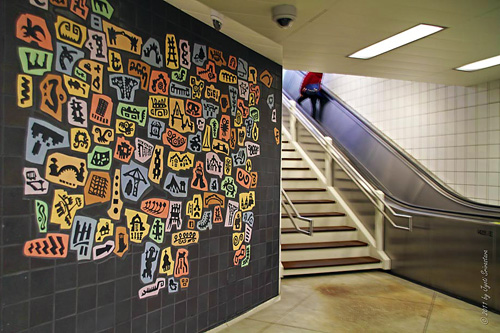 Coast of Chicago – by John Himmelfarb

Coast of Chicago – by John Himmelfarb 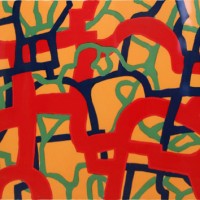 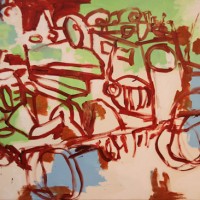 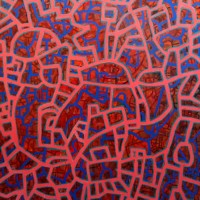 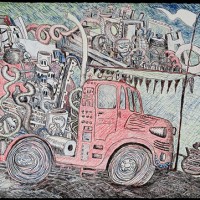 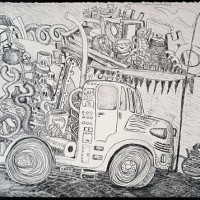 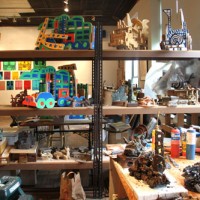 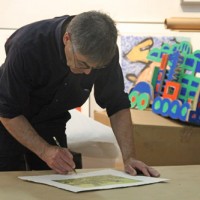 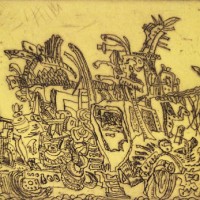 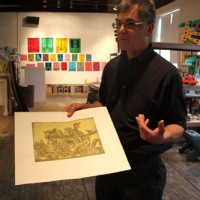