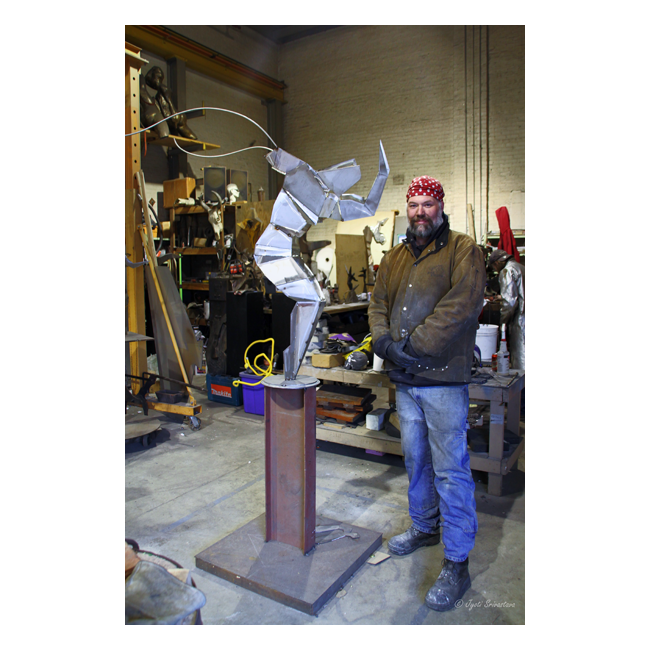 Eric Stephenson’s art explores the form, spirit and experience of the body and are rendered through abstraction.
In his words..
My current body of work focuses on the abstraction of the human form and how it conveys a complex and layered language. I begin my process by defining a graphic silhouette that captures the body in motion. I then define the subtleties that reside in transition between bone and muscle, torso and limbs, line and mass. I extrude the articulate silhouette back into three dimensional mass that can be pushed and pulled to exaggerate and communicate a sense of motion and weight.

Eric W. Stephenson is a fifth generation artist who received his BFA from the Pennsylvania State University and his MFA from the University of Houston. He honed his craft by working as a studio assistant for Robert Fisher and James T. Martin, and currently works with Richard Hunt in Chicago. Over the past 20 years, Stephenson has worked in art foundries in Montana, Texas, and Massachusetts, and has taught at the Glassell School of Art in Houston, the University of Houston, Rhode Island College, and the Art Institute of Chicago.

Eric Stephenson was a very successful President of non-profit Chicago Sculpture International [CSI] from 2011 to 2015. Under his leadership the organization expanded substantially in membership as well as in arranging group exhibitions. He steered CSI to raise the profile of sculptures in the city, by entering into strategic partnerships, which resulted into high profile shows and got extensive media coverage. For example in 2012 International Sculpture Conference in Chicago, CSI partnered with PodMajersky to have six installations in storefronts in Pilsen, and with Chicago Park District [CPD] to place 64 large works along the Chicago lakefront from Promontory Point on the south side to Belmont Harbor on the north side. In 2013, CSI and the CPD launched The Chicago Tree Project, which commissioned sculptors to transform dead trees throughout the city into public art pieces. In 2014, the Elks National Memorial hosted the critically acclaimed exhibition “Invoking the Absence.”

Stephenson’s “Lunarburn Studio Llc” hosts very popular event “Equinox Metal Pour”. Sculptors from all over the city participate in iron and bronze pour in night time festivities. It really is an event to remember! 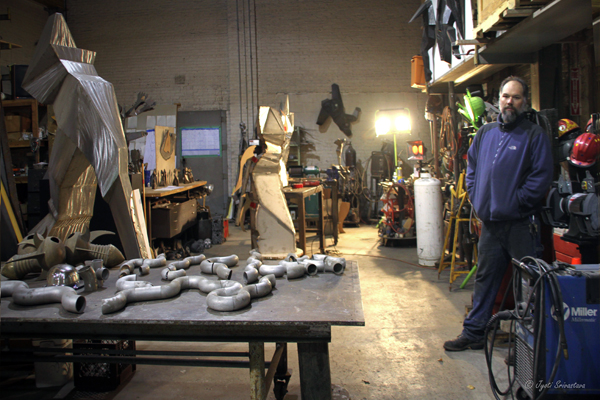 I am instinctively drawn to sculptures that are based on human forms. I can relate to all kinds of human form sculptures, be it in classical realist style or in modern abstract, or stylized forms. I have admired Olmec’s colossal stone heads, to portrait busts, to contemporary depiction the human form using a variety of styles and new materials.

So when I saw Stephenson’s human forms, I was immediately interested. His sculptures can be described as stylized, abstract figurative. His “Dancing Girl” looks like blurred motions captured in steel, while “Strut” looks like comical commentary on a woman’s high heeled gait down the street. Stephenson is highly skilled in welding as well as casting of metals.

Here are some images from the studio visit. 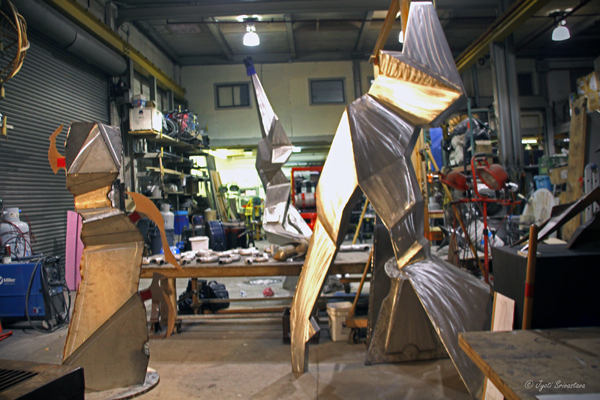 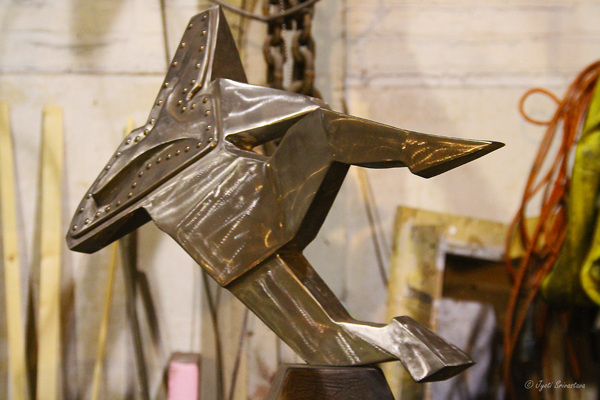 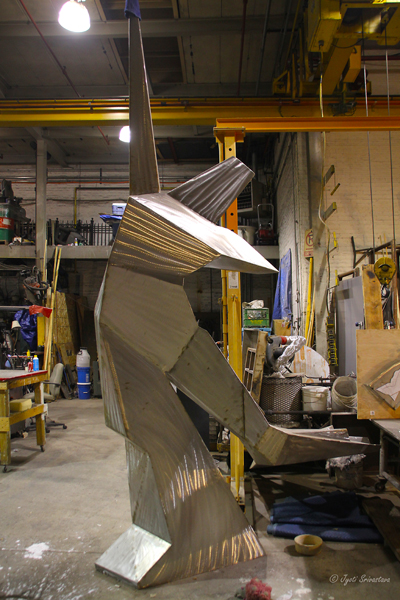 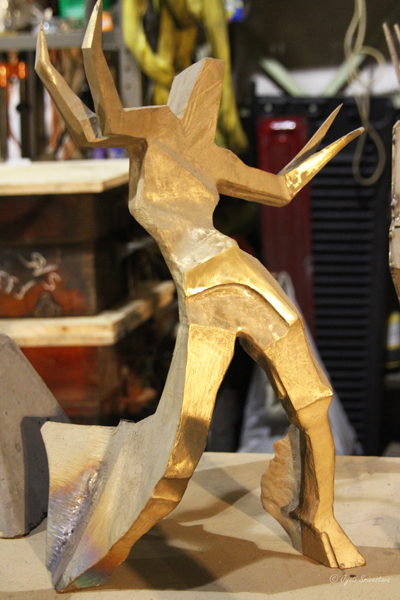 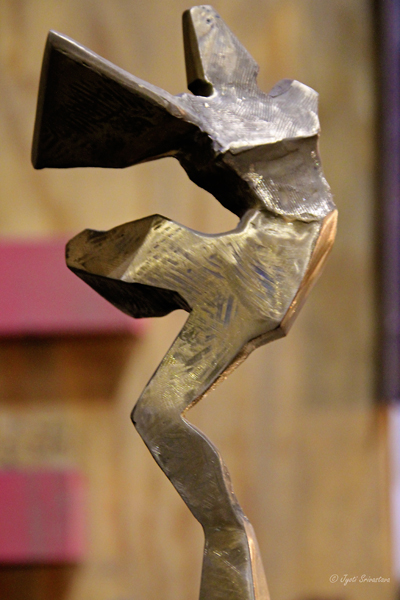 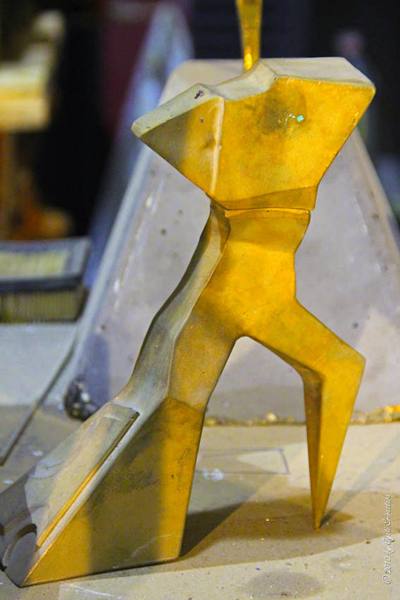 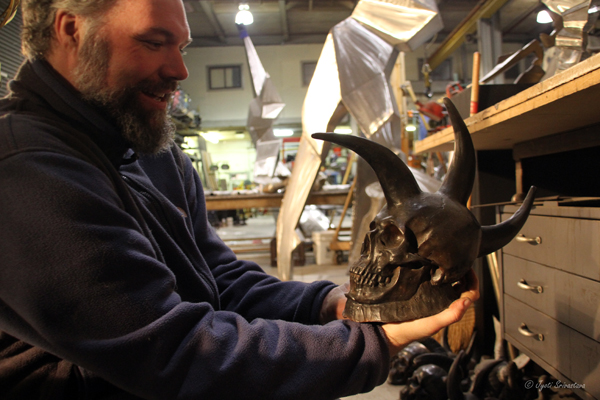 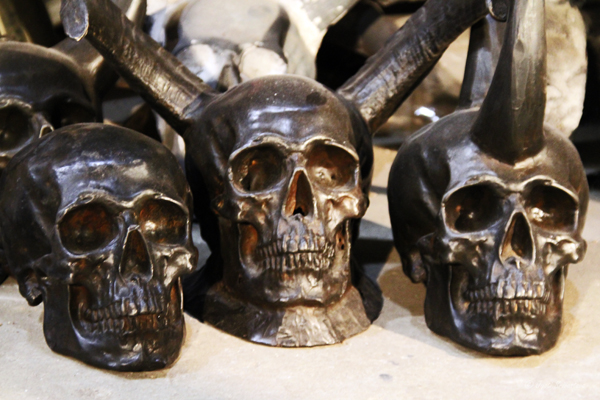 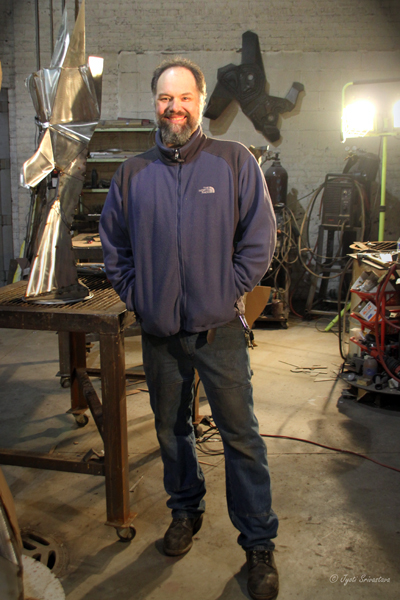 Some PUBLIC ART installations of Eric W. Stephenson
Some images are from after the Studio Visit. 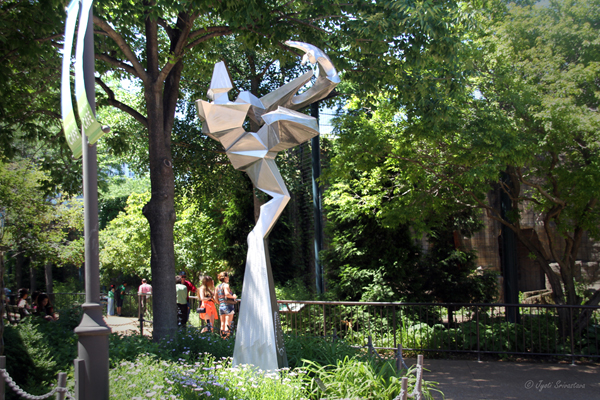 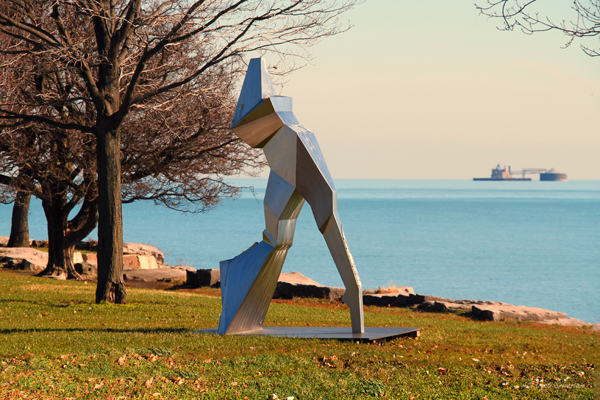 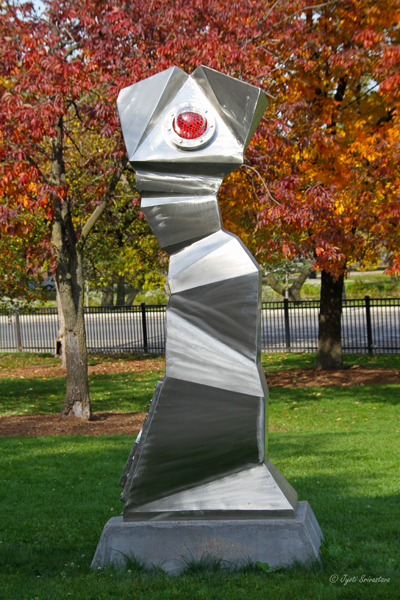 As mentioned earlier, Stephenson was the President of Chicago Sculpture International [CSI] from 2011 to 2015. Under his leadership the organization grew both in membership and in the number of exhibitions. Some highlights of his tenure..

– In 2012, a major event the International Sculpture Conference was held in Chicago. CSI rose to the occasion made extensive preparations for the event. CSI partnered with Chicago Park District [CPD] to have exhibit “Sculpture Now: Artwork Along the Lake,” which placed 64 large works along the Chicago lakefront from Promontory Point on the south side, to Belmont Harbor on the north side… click here.. CSI also partnered with PodMajersky to have “The Installation Experiment”, which involved six installations in storefronts in Pilsen… click here.. Some other exhibitions that year involved: “Sculpture Garden” at Bridgeport Art Center, “Oak Park Sculpture Walk”, “Process of Scale” exhibition at Ukrainian Museum of Modern Art, and the “Form in Flora III” exhibition at the Lincoln Park Conservatory.

– In 2013, CSI partnered with the CPD, to launch “The Chicago Tree Project”, which commissioned sculptors to transform dead trees throughout the city into public art pieces… click here.. The year 2013 also had “Sculpture on the Boulevards”, which was again a partnership between CSI and CPD. 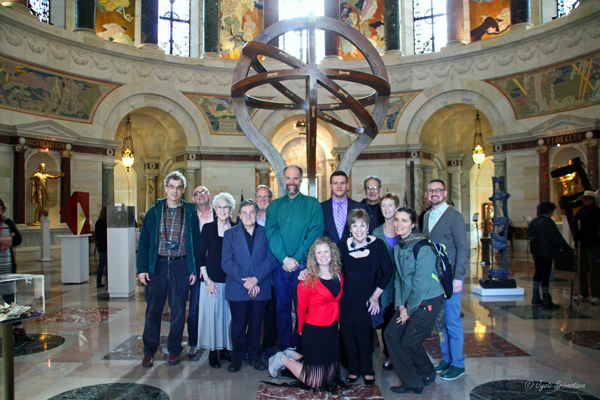 2014: “Invoking the Absence” by CSI at Elks National Memorial 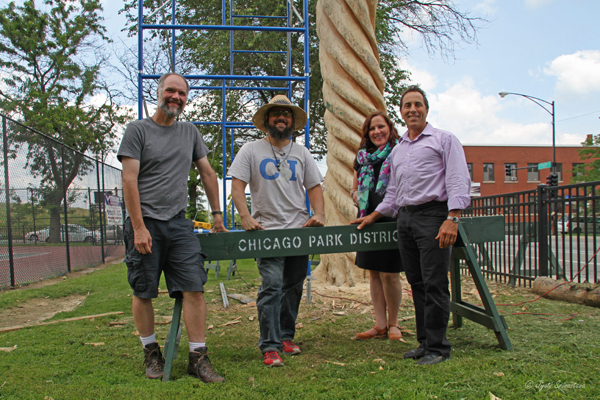 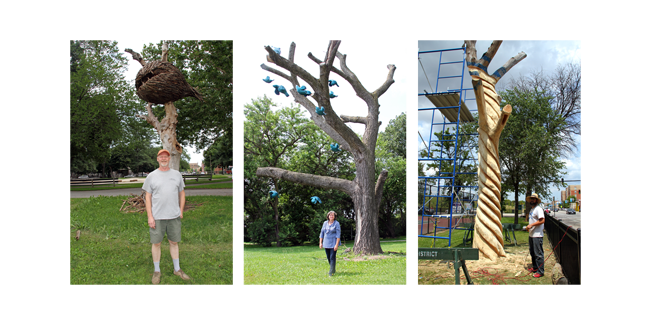 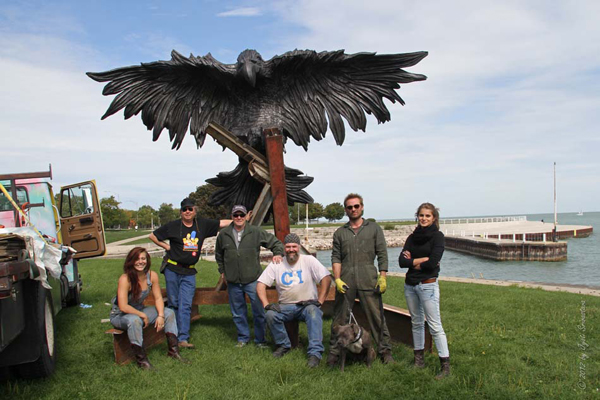 Installation of “Chicago Industrial” by Marshall Svendsen – by CSI team 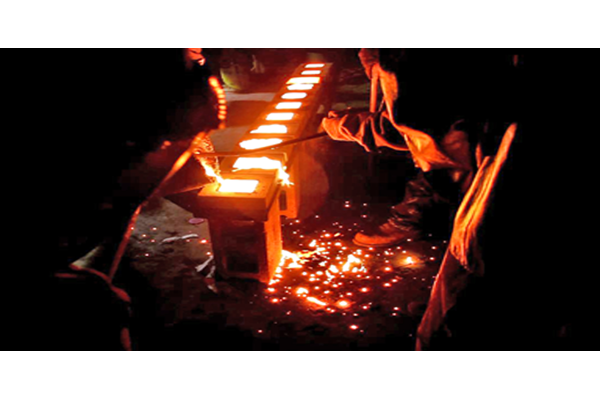 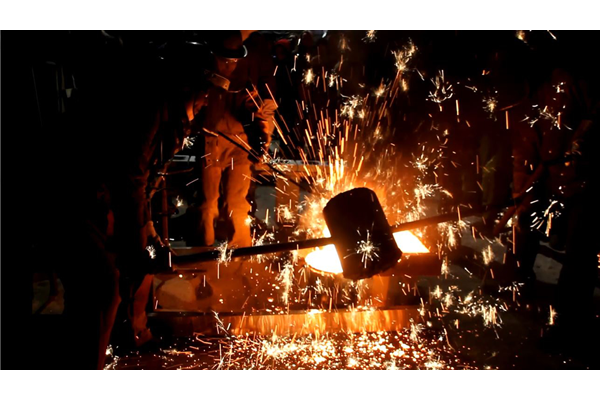 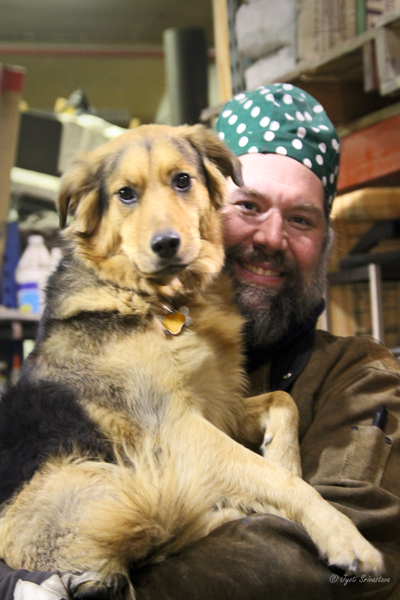 Thank You Eric Stephenson for your time!
Thank You for making beautiful art!