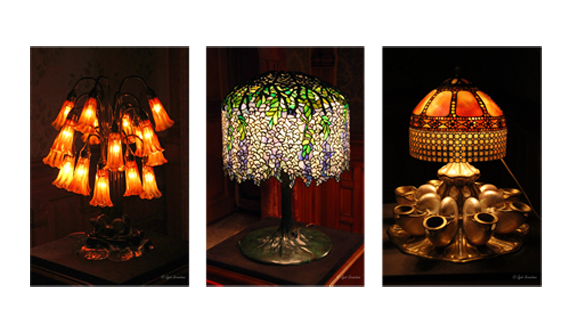 Above Image: Eighteen Lily Lamp, Wisteria Lamp and Nautilus Shell Lamp.
All from the exhibition, “Louis Comfort Tiffany: Treasures from the Driehaus Collection”

I saw the exhibition very late, only yesterday, May 7, 2014.  I had planned to spent an hour, and I came out more than three hours later admiring the wonderful display of works produced by Tiffany Glass & Decorating Co. and Tiffany studios. More than 60 objects – stained glass windows, lamps, vases and accessories – are on display from the collection of  Chicago businessman, philanthropist  and art collector Richard H. Driehaus.  All this in the magnificent setting of Gilded Age mansion Nickerson House. Its awe-inspiring! Highly recommended! Don’t miss it ! Just be there! Chances are you will visit again! 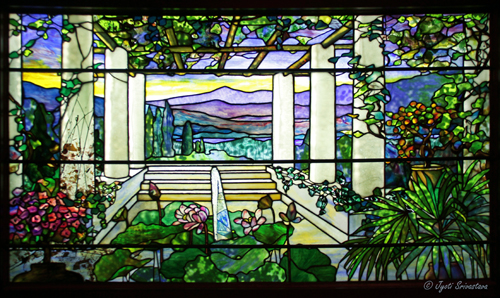 Louis Comfort Tiffany was all about nature. “Garden Landscape” window captures imaginary landscape with lily pond and loggia in the foreground and setting sun in the background.  His friend and art dealer Siegfried Bing wrote, “Never perhaps has any man carried to greater perfection the art of faithfully rendering Nature in her most seductive aspects, while subjecting her with so much sagacity to the wholesome canons of decoration”.

Tiffany was inspired by the vivid colors of sunset, the vibrancy of hydrangeas, peonies and wisteria, the iridescence of dragonfly wings, the shapes in the peacock wings, the graceful curves of nautilus shells, and he tried to incorporate these beautiful elements found in nature into his works. He was dissatisfied by the quality and variety of commercially available glass of his time. Traditional stained glass, relied heavily on painting on the glass. Tiffany did not like painting on glass. He believed in painting with glass rather than painting on it. In the 1870s he began experimenting and introduced many new techniques and types of glass  –  like opalescent glass, motted glass, confetti glass, drapery and glass plating – that produced various colors and textures, to replace the use of paint on glass.  This  completely revolutionized the art of stained glass. When light fell upon the window, it transmitted through the various layers of glass and was not reflected off it, producing brilliant results. We see all these innovative elements in Tiffany’s “River of Life” window. 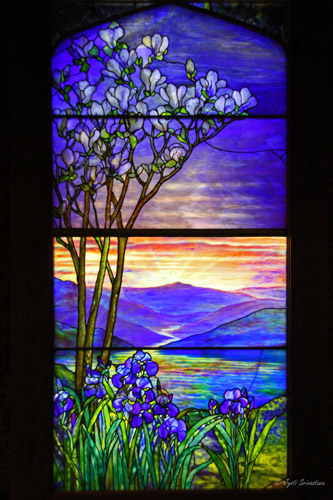 In the “River of Life” window, in the foreground we see irises situated beneath flowering magnolia trees. The background has purple hills with a central meandering stream. This window exemplifies Louis C. Tiffany’s lifelong fascination with nature – light and color. To produce the effect Tiffany uses several techniques. Opalescent glass with milky quality and iridescent sheen for magnolias, glass plating to create the three dimensional effect on mountains, drapery glass for the folds on iris petals, motted glass to create the effect of sunlight filtering through the leaves and confetti glass on the top to give a distinctive appeal. 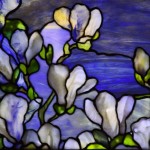 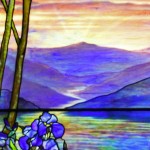 Glass Plating – depth of field in the mountains 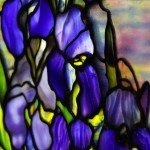 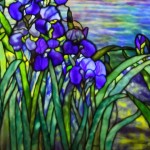 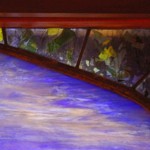 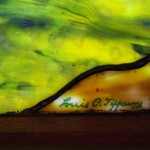 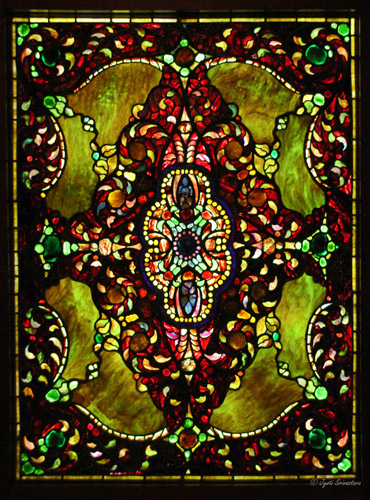 Although Tiffany is most famous for his nature inspired windows, he also produced some superb abstract windows. This abstract “Geometric Window” is reminiscent of a Persian carpet. He often incorporated pieces of jewels into his work – mother-of-pearl, quartz pebbles, abalone shells and chunk glass jewels – giving a three dimensional quality to his work, as seen in the image below. 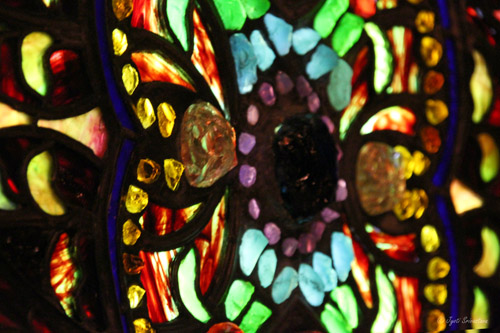 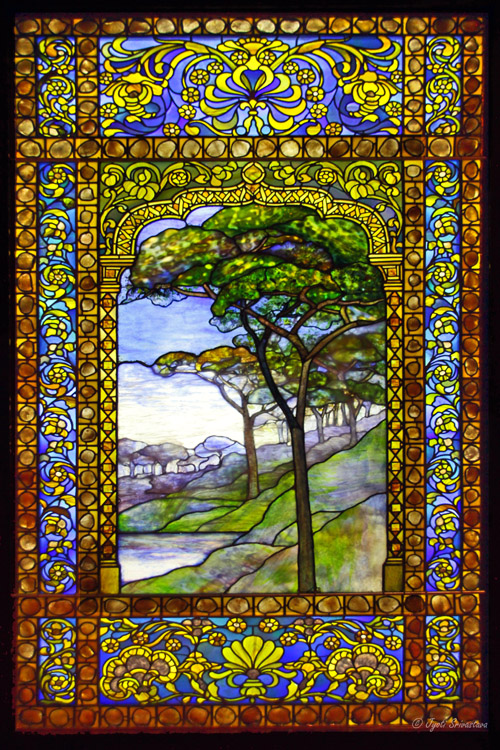 This Landscape Window combines the nature inspired landscape in the central panel
with elaborate abstract geometric patterns in the border.

Tiffany not only revolutionized the art of producing stained glass windows, but also the art of producing table lamps and lamp shades. Each lamp was handmade by skilled craftsmen, not mass produced nor machine produced. It is important to note that lamp designer was not necessarily, Louis Comfort Tiffany [as had been thought for over 100 years], but a previously unrecognized artist named Clara Driscoll. She was identified in 2007 by Rutgers professor Martin Eidelberg as being the master designer behind the most creative and valuable leaded glass lamps produced by Tiffany Studio. So by Tiffany Lamp we mean lamp produced by studios of Louis C. Tiffany. 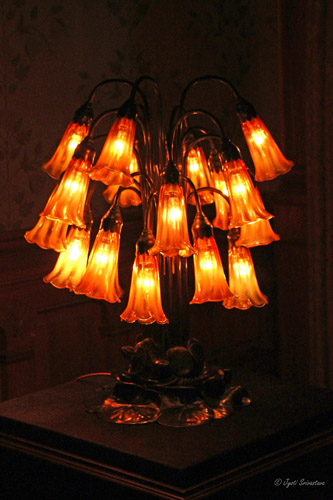 Eighteen light lily lamp / Prior to 1902

The Lily Lamp was one of the best known and successful of Tiffany’s designs. The model was exhibited in Tiffany display at the 1902 Turin Exposition of Industrial Arts, where it was noted that electric lights , unlike fuel lamps, allowed shades to point downwards. The delicate multi-flower form was very popular. The number of lilies ranged from three to eighteen. A floor-lamp version was also produced. 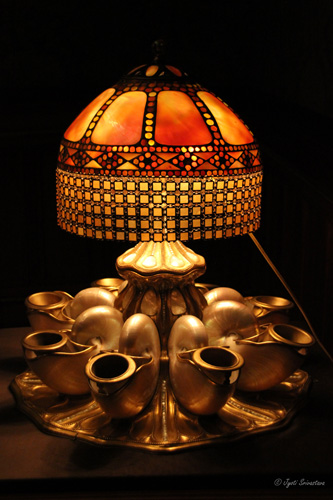 Nautilus Shell Centerpiece Lamp: This unique design combines many exotic materials like mother-of-pearl and nautilus shell, with blown glass and gilt bronze. The lamp and tray could be separated and used independently. The original price tag was $ 550, which today would be $ 13,500.

The exhibition has many nature inspired, especially floral Tiffany lamps. 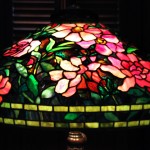 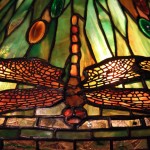 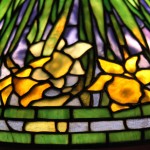 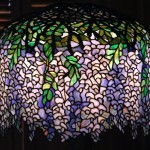 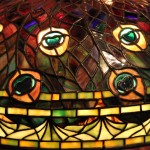 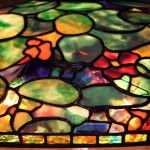 While Tiffany’s monumental stained glass windows and one-of-a-kind lamps were too expensive and were bought mostly by wealthy suctomers, Tiffany studio produced a number of glass and metal accessories that were sold in retail forms in New York and all over the country, including Marshall Field & Co. It included lamp bases, candle sticks, jewellery boxes, and works in gold, silver, bronze and enameled copper. These were relatively inexpensive and very popular. 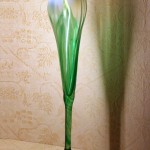 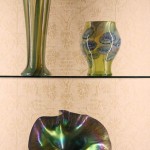 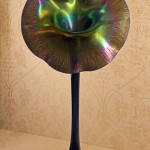 Although Tiffany was born in New York City and his name is mostly associated with the city, he had very strong ties with Chicago. Tiffany’s Chicago connection began with World’s Columbian Exposition in 1893, where his award-winning Byzantine inspired chapel and ecclesiastical wares [including mosaics, stained glass windows and furniture] became international sensation. The exhibition includes one item – Benediction Candelabra – that was displayed at the Chicago’s World Fair. 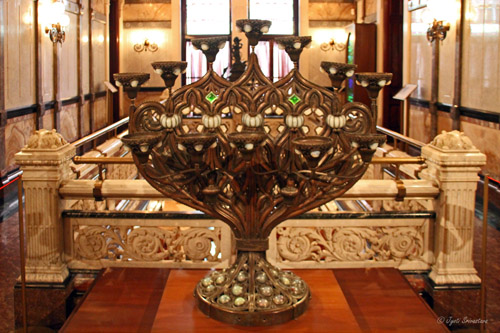 Benediction Candelabra was displayed at the World’s Columbian Exposition in Chicago in 1893.

The success at the Chicago’s World Fair, brought many commissions to Tiffany. Soon he had to open a studio in Chicago, to manage the increasing demand. Tiffany’s work can be seen at many places in Chicago, the most famous being – stained glass windows at the Second Presbyterian Church, stained glass panels at Marquette building lobby, Tiffany dome at Macy’s at State Street [earlier Marshall Field and Co.], skylight atrium at Fullerton Hall of the Art Institute of Chicago, and the largest Tiffany dome can be seen at the Chicago Cultural Center.

The exhibition includes outstanding examples of Tiffany windows, lamps, vases, and accessories from the Driehaus Collection, and also establishes Tiffany’s Chicago connection. It is very well worth a trip – and more! 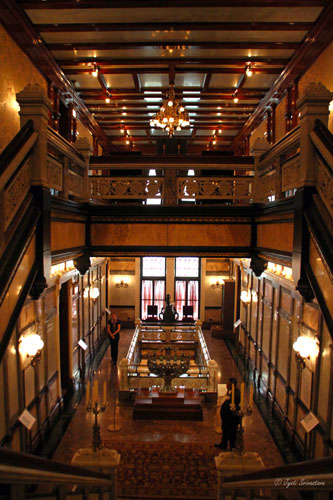 All this in the magnificent setting of the Nickerson House!
Special shout-out to our excellent tour guide Avery
and the entire staff at Driehaus Museum for being very pleasant, polite and extremely well informed!
And Thanks to Richard H. Driehaus for this fabulous exhibition!