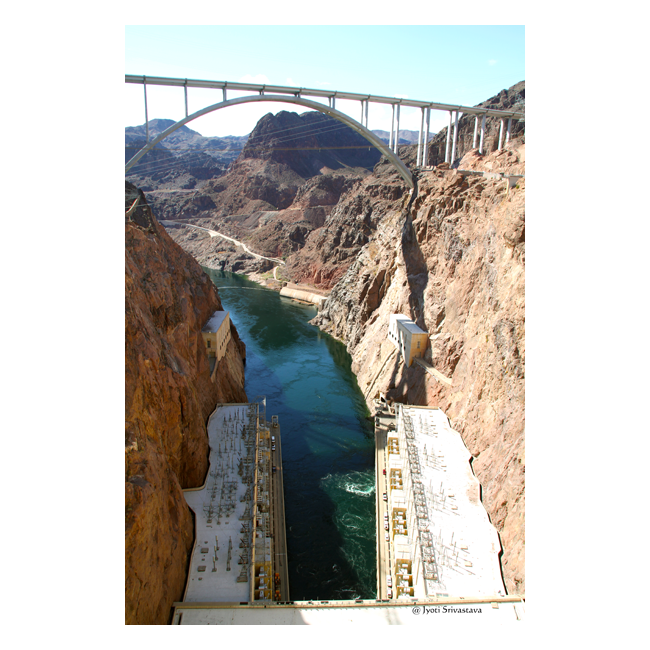 Between Nevada and Arizona

Hoover Dam, once known as Boulder Dam, is a concrete arch-gravity dam in the Black Canyon of the Colorado River. It is situated on the Nevada-Arizona border, 30 miles southeast of Las Vegas. The dam streatches 1,244 feet across the Black Canyon. Hoover Dam took five years to construct. It was built to control flooding along the Colorado River and provide water and hydroelectric power for California and the Southwest. Since its construction, it has spurred tremendous growth in that part of the United State. 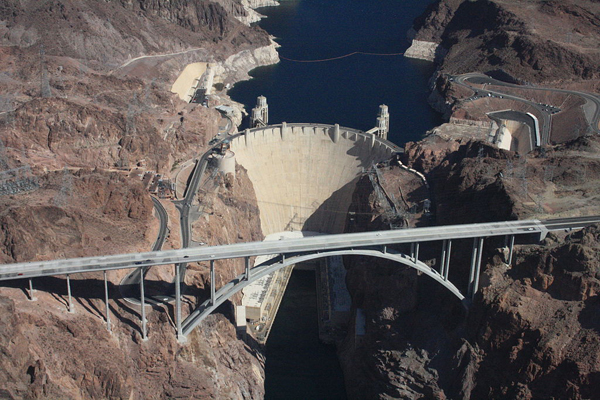 Hoover Dam / Image by Ubergirl (Own work) via Wikimedia Commons

Some Highlights:
– It was constructed between 1931 and 1936 during the Great Depression and was dedicated on September 30, 1935, by President Franklin D. Roosevelt.
– The dam was originally known as Boulder Dam from 1933 to 1947, when it was officially renamed Hoover Dam by a joint resolution of Congress. The dam was named after President Herbert Hoover.
– Its construction was the result of a massive effort involving thousands of workers, and cost over one hundred lives.
– An entire city was created for workers on the construction project –  Boulder City, Nevada.  Its sole reason was to house workers contracted to build the Hoover Dam on the Colorado River. In the midst of the Great Depression, men hoping for work on the dam project had begun settling along the river in tents soon after the precise site for the dam had been chosen by the Bureau of Reclamation in 1930. Their ramshackle edifices were collectively known as “Ragtown”.  Boulder City was situated on federally owned land and had no elected officials.  In fact, the city was run by an employee of the U.S. Bureau of Reclamation who had the authority to evict residents as he saw fit. Among the local rules, alcohol and gambling were banned.
– Hoover Dam created America’s largest reservoir – Lake Mead. Formed by the damning of the Colorado River, Lake Mead covers about 248 square miles and is capable of holding some 28.9 million acre-feet of water (an acre-foot is equivalent to about 325,000 gallons). The creation of Lake Mead (named for Elwood Mead, commissioner of the U.S. Bureau of Reclamation when the dam was being planned and built) flooded the community of St. Thomas, Nevada, and turned it into a ghost town. Lake mead serves water to the states of Arizona, Nevada and California, providing sustenance to nearly 20 million people and large areas of farmland.
– It once was the Earth’s tallest dam. Rising 726.4 feet, Hoover Dam was the world’s tallest dam when it was built in the 1930s. These days, it’s the second-tallest dam in the U.S., having been surpassed by the 770-foot-high Oroville Dam in Northern California in 1968. The globe’s tallest dam is the 1,001-foot-high Jinping-I Dam in Liangshan, Sichuan, China, which became operational in 2013.
– America’s second-highest bridge now reroutes traffic from the top of the dam: Hoover Dam bypass, also known as Mike O’Callaghan–Pat Tillman Memorial Bridge opened in October 2010. Since the 1930s, U.S. Route 93 ran right along the top of the dam; however, the two-lane highway was hazardous and had grown increasingly congested over the years. In an effort to remedy these problems, construction began on a dam bypass bridge in 2005. Completed five years later in 2010, the Mike O’Callaghan-Pat Tillman Memorial Bridge measures 1,905 feet long and soars nearly 900 feet above the Colorado River, making it the longest single-span concrete arch bridge in the Western Hemisphere as well as the second-highest bridge of any type in America.

Hoover Dam is a major tourist attraction; nearly a million people tour the dam each year. Hoover Dam was completed in 1936. It opened for tours in 1937. But following Japan’s attack on Pearl Harbor on December 7, 1941, it was closed to the public when the United States entered World War II, during which only authorized traffic, in convoys, was permitted. After the war, it reopened September 2, 194. The dam closed on November 25, 1963 and March 31, 1969, days of mourning in remembrance of Presidents Kennedy and Eisenhower. In 1995, a new visitors’ center was built, and the following year, visits exceeded one million for the first time. The dam closed again to the public on September 11, 2001; modified tours were resumed in December and a new “Discovery Tour” was added the following year. Today, nearly a million people per year take the tours of the dam offered by the Bureau of Reclamation. 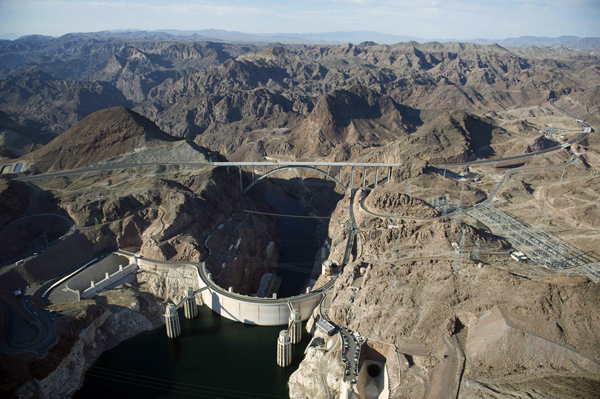 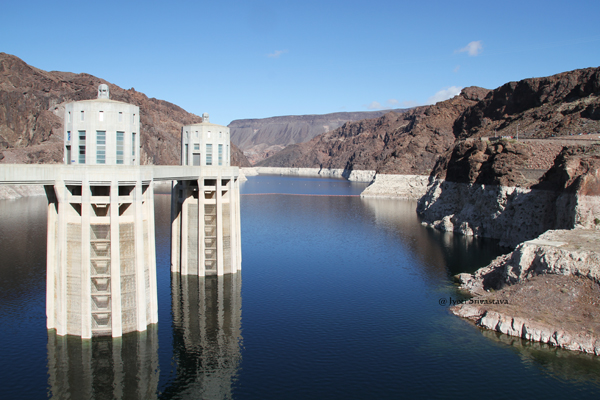 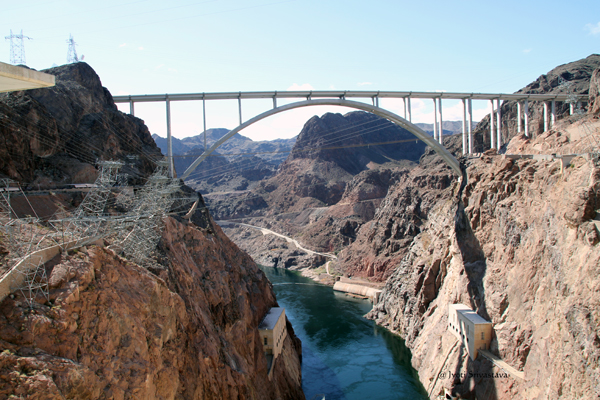 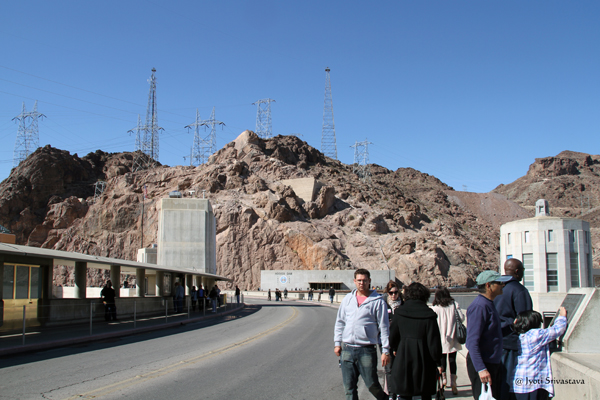 Hoover Dam between Nevada and Arizona / Standing between two time zones at once. 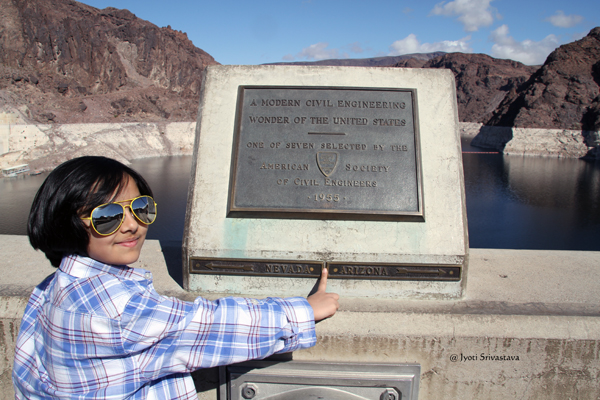 Hoover Dam between Nevada and Arizona / / Standing between two time zones at once.

Hoover Dam straddles between two Time Zones:
Aside from this being an amazing piece of infrastructure, and standing Between two states at once, you also have the ability two different time zones at the same time. Nevada with Pacific time and Arizona with Mountain time. 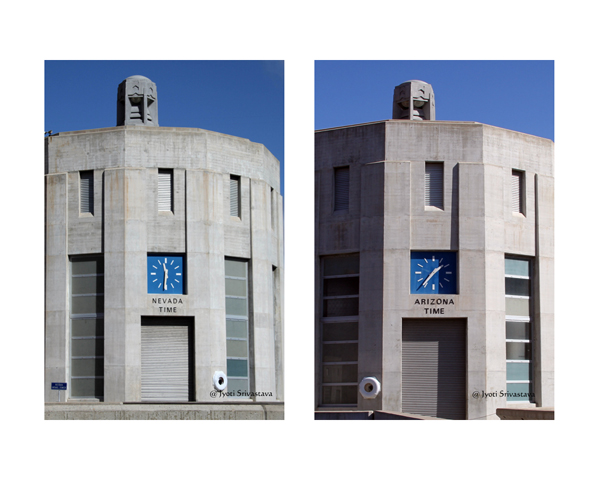 Hoover Dam between Nevada and Arizona 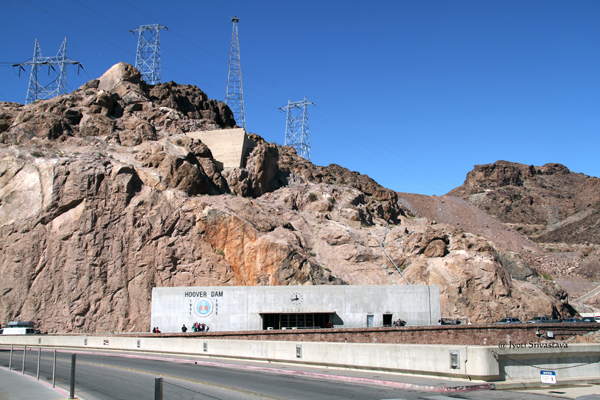 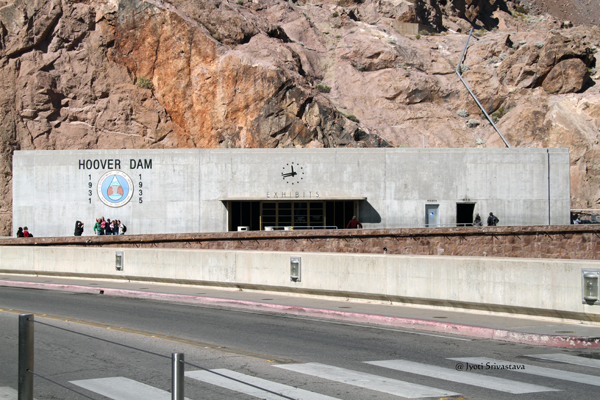 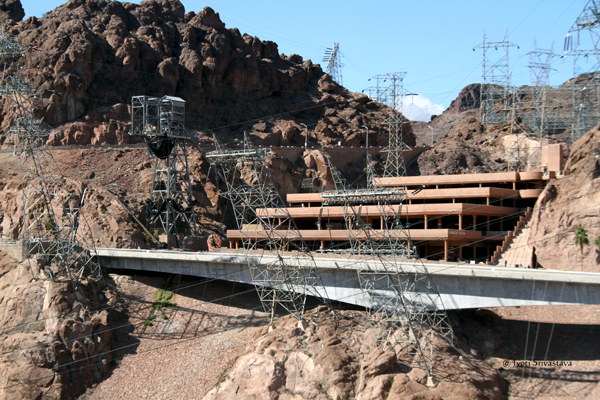 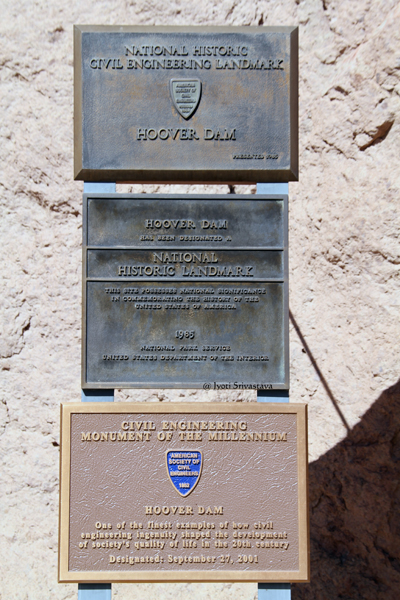 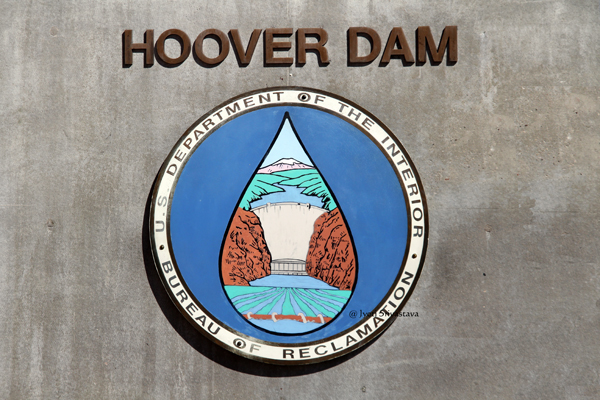 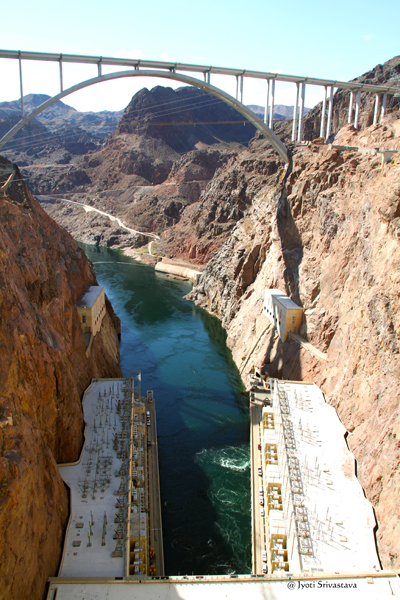 The Hoover Dam bypass  is also known as Mike O’Callaghan–Pat Tillman Memorial Bridge. It is jointly named for Mike O’Callaghan, Governor of Nevada from 1971–1979, and Pat Tillman, an American football player who left his career with the Arizona Cardinals to enlist in the United States Army and was later killed in Afghanistan by friendly fire

The bypass opened October 2010. It rerouted the heavily travelled US 93 from its previous routing along the top of Hoover Dam and removed several hairpin turns and blind curves from the route.  It is an arch bridge that spans the Colorado River between the states of Arizona and Nevada. The bridge is located within the Lake Mead National Recreation Area approximately 30 miles (48 km) southeast of Las Vegas, and carries U.S. Route 93 over the Colorado River. 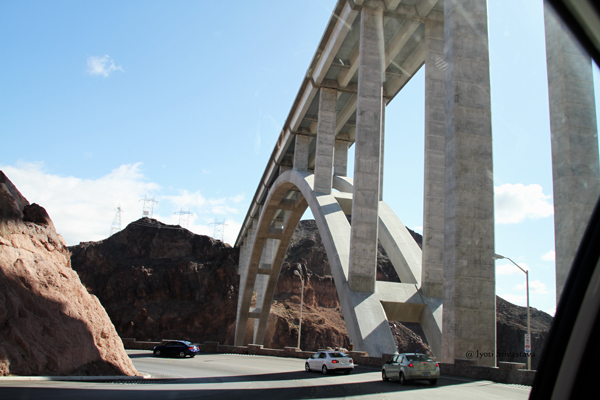 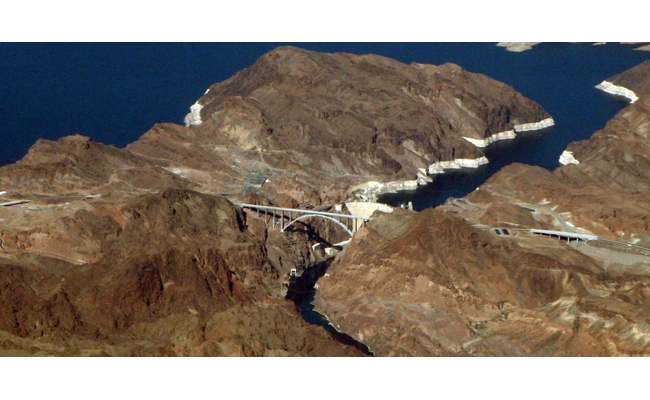 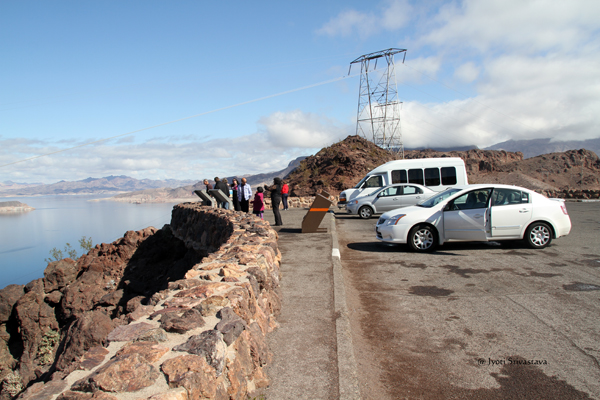 The Colorado River has dams on both sides of the Grand Canyon, which forms two huge artificial lakes: Lake Powell in Utah and Lake Mead on the Arizona/Nevada border. Formation of Lake Mead began in 1935, less than a year before Hoover Dam was completed. The area surrounding Lake Mead was established as the Boulder Dam Recreation Area in 1936. In 1964, the area was expanded to include Lake Mohave and its surrounding area and became the first National Recreation Area to be designated as such by the U.S. Congress.

Lake Mead NRA features water recreation, including boating, swimming, and fishing, on both lakes as well as the stretches of river between the lakes. It also features hiking trails and views of the surrounding desert landscape. Three of the four desert ecosystems found in the United States — the Mojave Desert, the Great Basin Desert, and the Sonoran Desert — meet in Lake Mead NRA.

The construction of the dam and the arrival of thousands of workers prompted the legalization of gambling in Nevada and the consequent growth of the city. Before the dam, this area of the Mojave Desert in northwest Arizona was largely unvisited due to the harsh, irregular terrain, the lack of roads, and the extreme summer temperatures. Now, the lake forms the major component of Lake Mead National Recreation Area, 1.5 million acres that extends quite far south and includes 25 miles of the Colorado River plus the smaller Lake Mohave, formed by Davis Dam near Bullhead City. 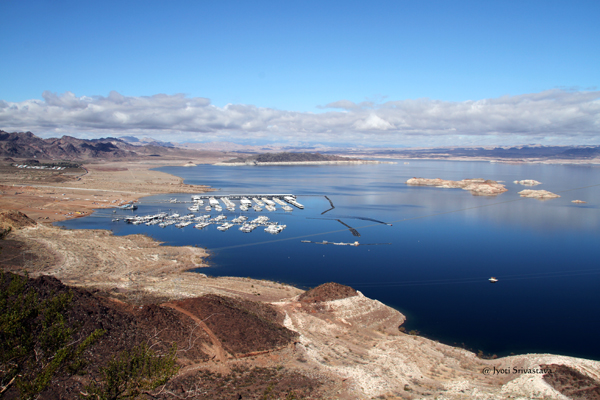 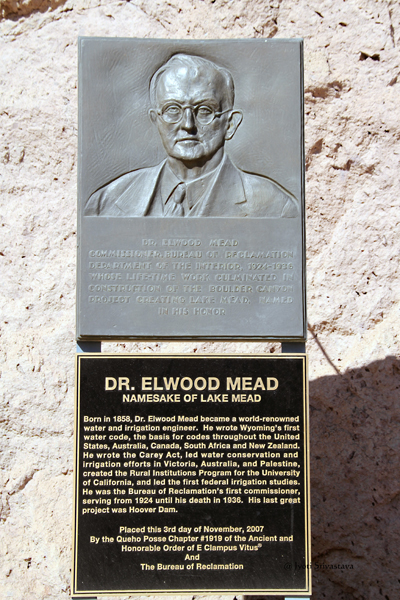 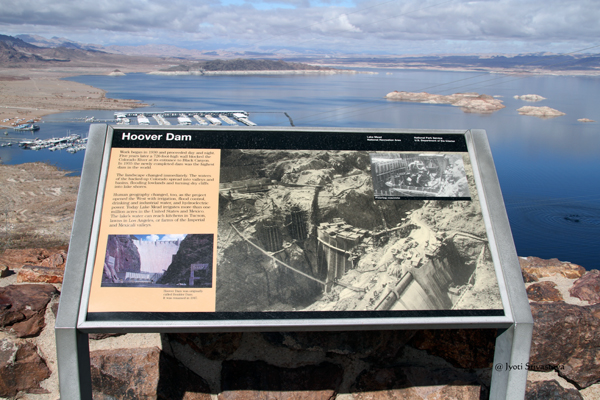 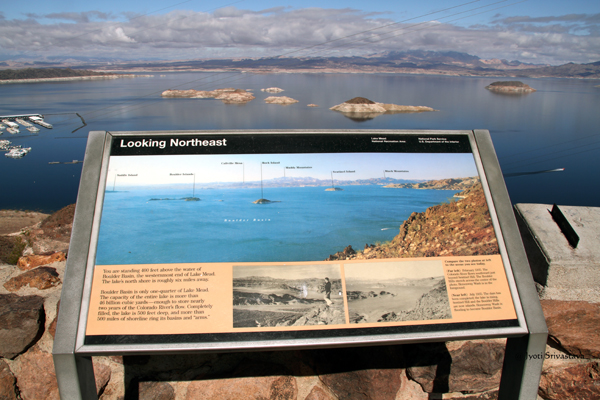 My trip to Hoover Dam was in February 2012, when I joined my sister on her family vacation.
It was a trip to Los Angeles, Grand Canyon, Las Vegas, and Hoover Dam.

RANDOM IMAGES from the trip: Las Vegas to Hoover Dam to Los Angeles 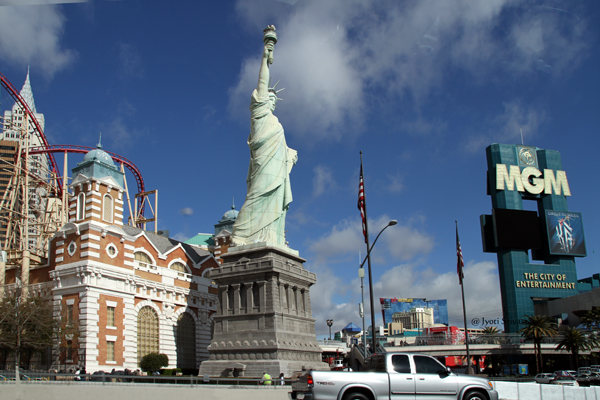 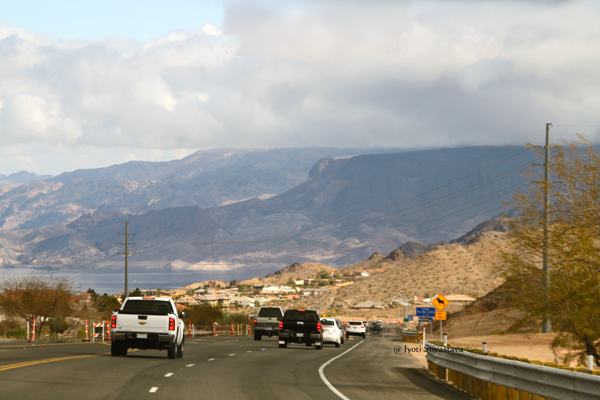 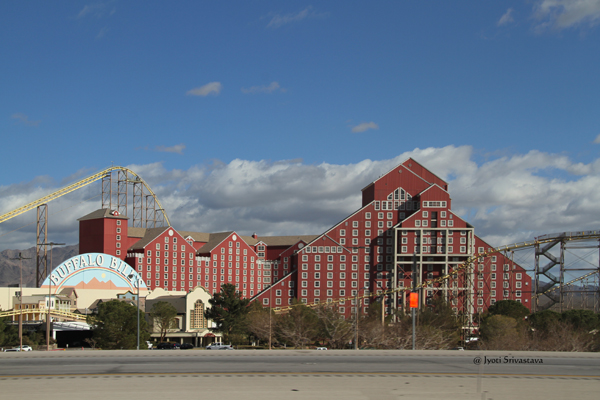 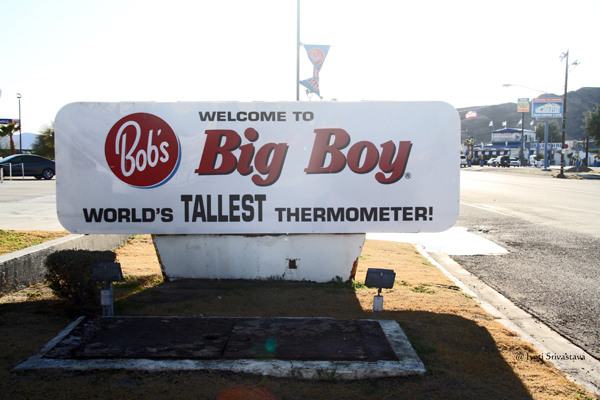 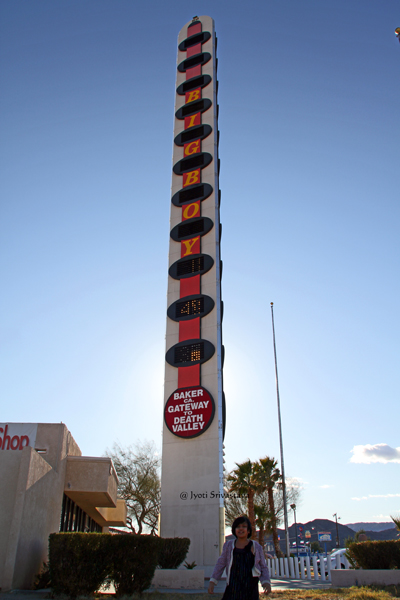 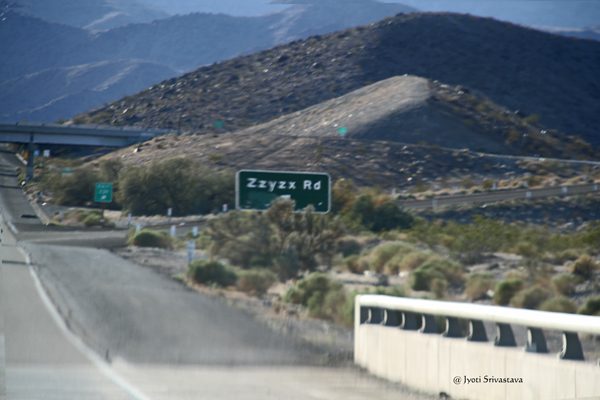