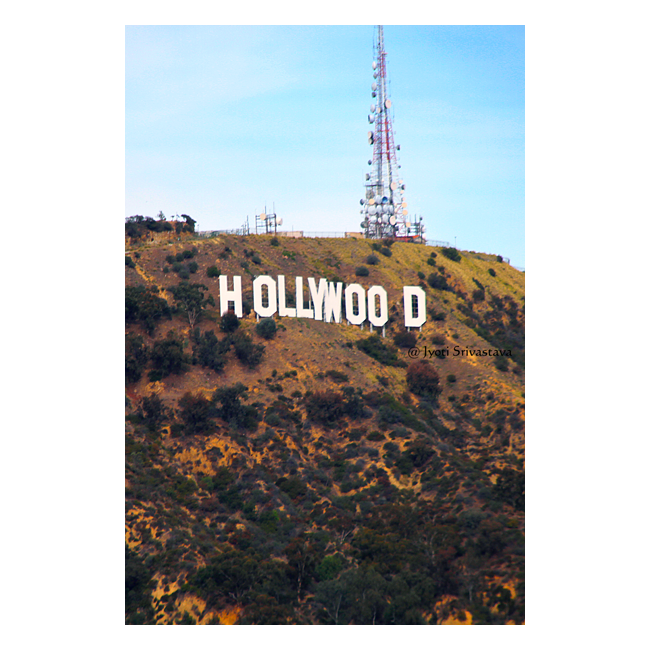 The Hollywood Sign is a landmark and American cultural icon located in Los Angeles, California.

It is situated on Mount Lee, in the Hollywood Hills area of the Santa Monica Mountains. 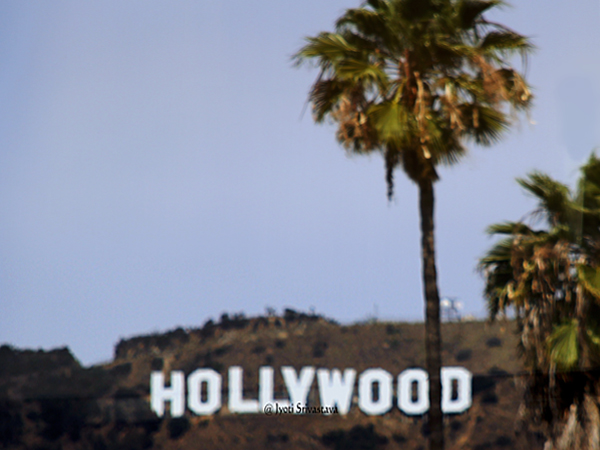 Nothing says “Hollywood” to the world as much as the iconic Hollywood Sign. It is perched high atop Mount Lee, the tallest peak in L.A.. The Sign measures 450 feet long, and its letters are 45 feet high. The Hollywood sign is visible from all parts of Hollywood. Erected in 1923 as an advertising sign for a real estate development in Beachwood Canyon, the Sign originally read “Hollywoodland.” The last four letters were removed in 1945, after Hollywood had become the world’s movie capital, and the Sign had already become a well-known landmark. In fact, it’s been officially declared “Los Angeles Cultural-Historical Monument #111.”

There is no easy way to reach the Sign itself. It is located atop an undeveloped hillside, far from roads. Also, the sign has been fenced and a high-tech alarm system has been installed.

It is recommended to just looking at the Sign from a safe distance. 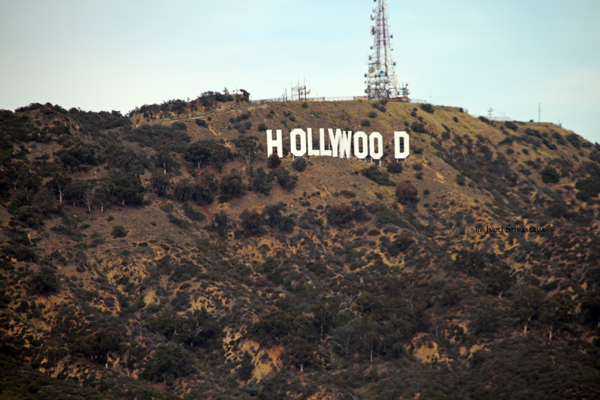 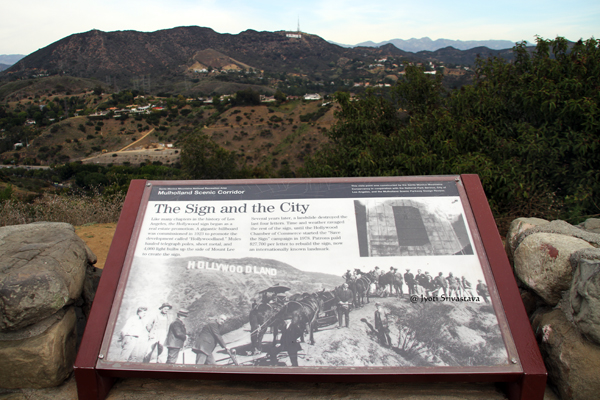 Hollywood Sign / From The Overlook – Mulholland Scenic Parkway and Corridor. 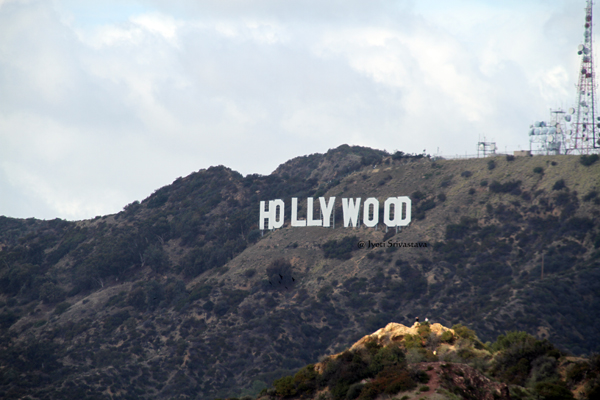 The Griffith Park Observatory sits atop Mount Hollywood. As it is one of the highest spots in Los Angeles, the Observatory offers breathtaking views of the city below, including a fine view of the Hollywood Sign, to the northwest of the Observatory. 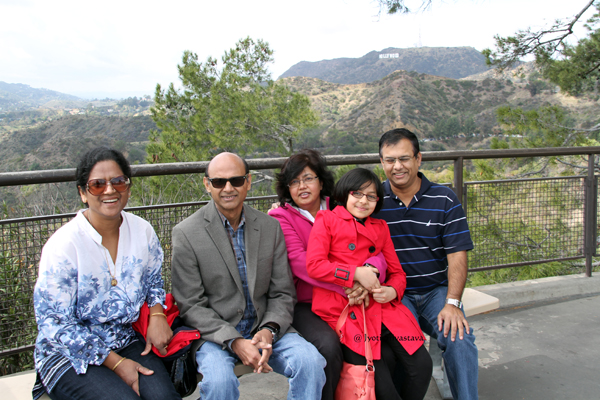 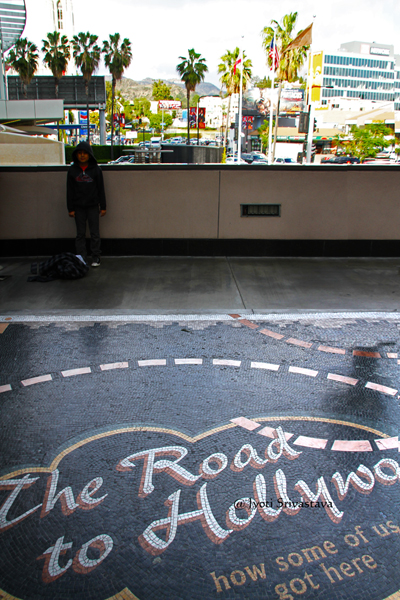 The Hollywood and Highland Center

The Hollywood and Highland Center occupies almost two city blocks in the heart of Hollywood. It is a combination of shops, restaurants, clubs and live theatre. It opened in 2001, just across the street from the El Capitan Theatre, at corner of the Hollywood Roosevelt Hotel, and right next to the legendary Grauman’s Chinese Theatre and its famous forecourt of stars walk. The Center is home to over 60 stores, nine estaurants, six new movie theatres, two nightclubs and the Renaissance Hollywood Hotel. It also houses the Kodak Theatre, the permanent home for the annual Academy Awards show.

The center’s main level, is a viewing area for the Hollywood sign. They also have coin-fed telescopes for a closer view. 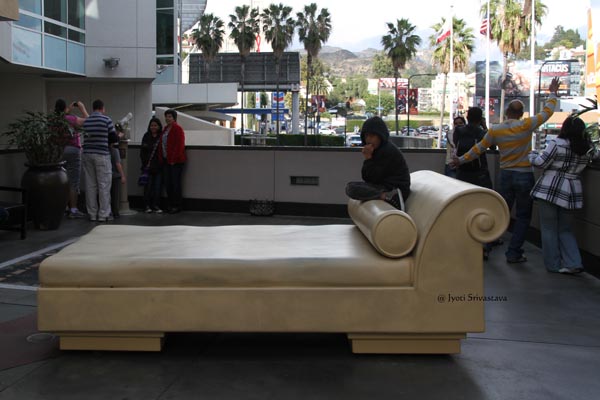 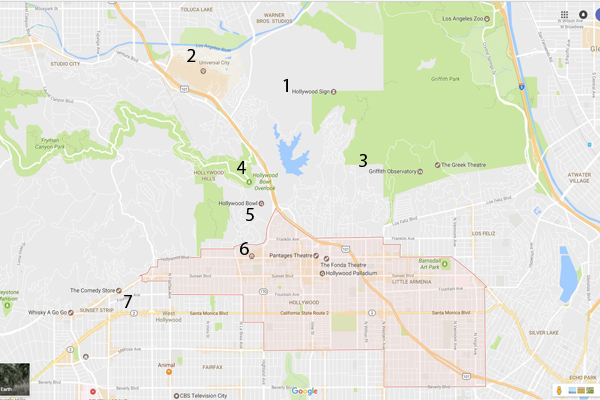 If you are anyone like me, you would have believed that Hollywood Sign, Hollywood Walk of Fame, and Universal Studios are all together. That is what I believed, before I visited Los Angeles and saw these sites. In a way, they are, in one area, but not exactly. They are quite scattered as the above map shows.

So Hollywood Sign is far away from Hollywood Boulevard.