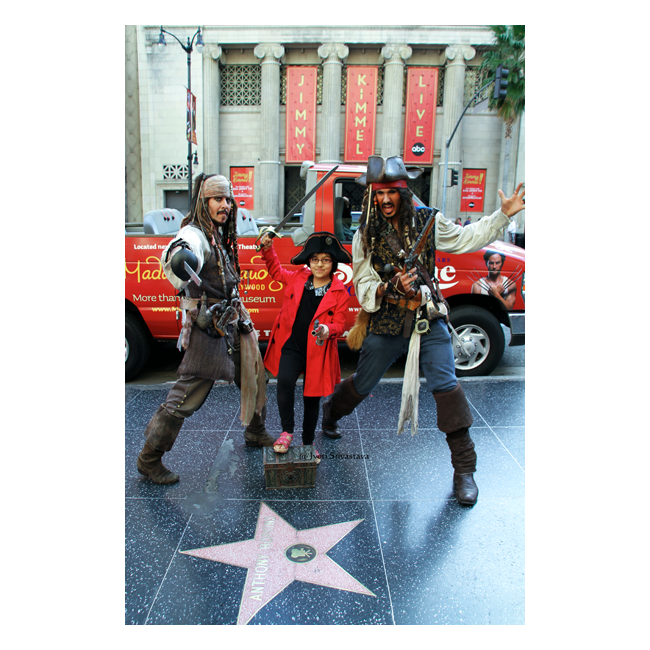 The Hollywood Walk of Fame runs along 15 blocks of Hollywood Boulevard and 3 blocks of Vine Street, Hollywood, California.

The Walk of Fame runs 1.3 miles [2.1 km] east to west on Hollywood Boulevard from Gower Street to La Brea Avenue, plus a short segment of Marshfield Way.

Each star is a coral-pink terrazzo 5-pointed star, rimmed with brass, inlaid into a charcoal-colored terrazzo background. The upper portion of the pink star field, has name of the honoree, inlaid in brass block letters. Below the inscription, a round inlaid brass emblem indicates the category of the honoree’s contributions.

The stars are permanent public monuments to achievement in the entertainment industry, bearing the names of a mix of actors, musicians, directors, producers, musical and theatrical groups, fictional characters, and others.

The Walk of Fame is administered by the Hollywood Chamber of Commerce and maintained by the self-financing Hollywood Historic Trust.

It is a popular tourist destination, with a reported 10 million visitors in 2003.

In 1978, the Cultural Heritage Board of the City of Los Angeles designated
the Hollywood Walk of Fame as Los Angeles Historic-Cultural Monument #194. 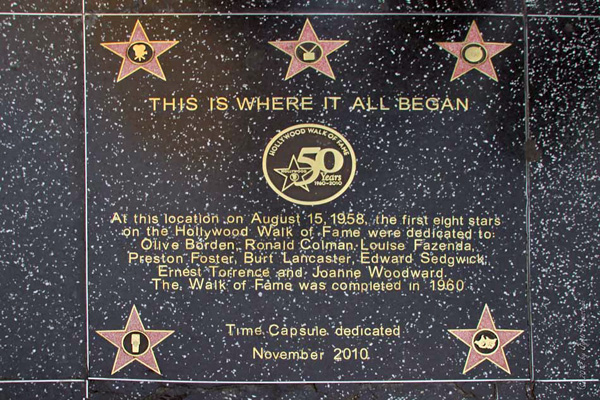 This is where it all began..
At this location on August 15, 1958, the first eight Stars
on the Hollywood Walk of Fame were dedicated to
Olive Borden, Ronald Colman, Louise Fazenda,
Preston Foster, Burt Lancaster, Edward Sedgwick,
Ernest Torrence and Joanne Woodward.
The Walk of Fame was completed in 1960.
Time Capsule dedicated November 2010. 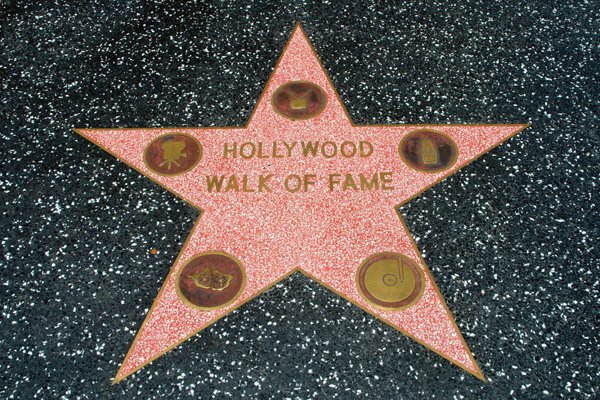 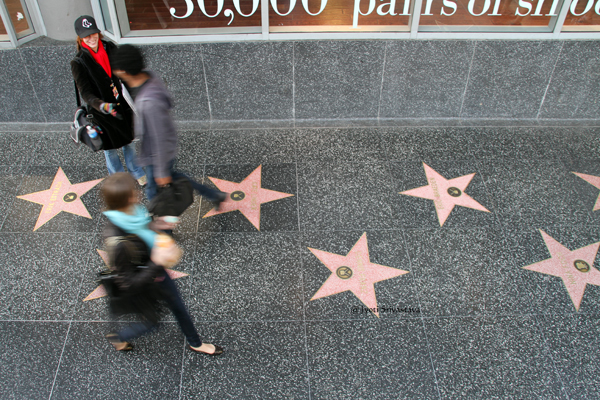 A fantastic article on the “History of the Hollywood Walk of Fame” .. click here..

The man credited with the idea for creating a Walk of Fame, was E. M. Stuart, who served in 1953 as the volunteer president of the Hollywood Chamber of Commerce. In that year, according to a Chamber press release he proposed the Walk as a means to “maintain the glory of a community whose name means glamour and excitement in the four corners of the world.”

In 1978, the Cultural Heritage Board of the City of Los Angeles designated the Hollywood Walk of Fame as Los Angeles Historic-Cultural Monument #194. 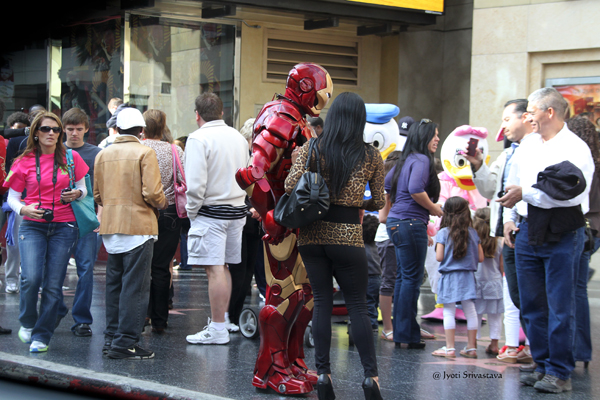 Costumed Characters mis with visitors along the Walk of Fame

Costumed Characters Along the Walk of Fame

One cannot miss the many costumed characters along the Hollywood Walk of Fame. There is Superman, Batman, Spiderman, Shrek, Captian Jack Sparrow, Donald Duck, Mickey Mouse, R2-D2, C-3PO and so much more. You can tip them for a photo. They also help finding your favorite star on the Walk of Fame.. 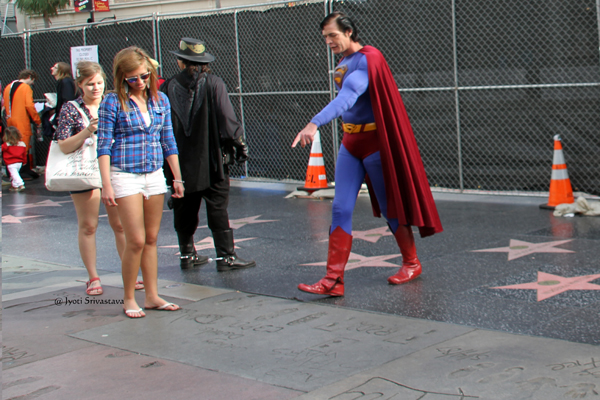 Superman helping the lady find “Starwars” imprints along the walk of Fame. 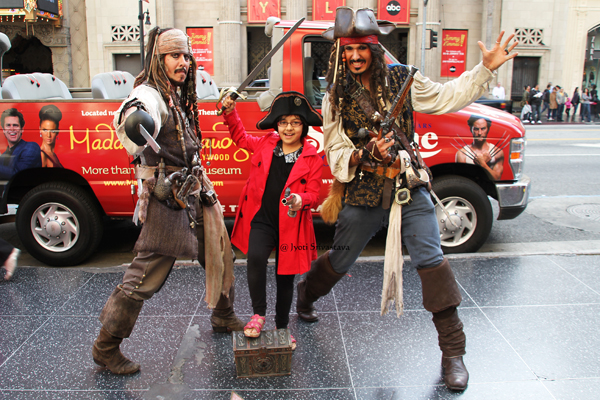 Pirates of the Caribbean / Hollywood Walk of Fame 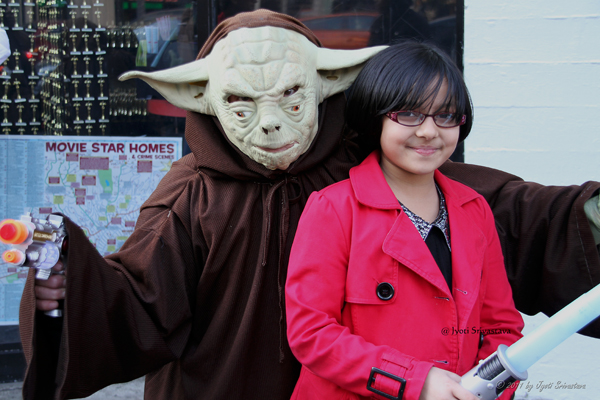 Yoda the Jedi-Master from Star Wars / Hollywood Walk of Fame 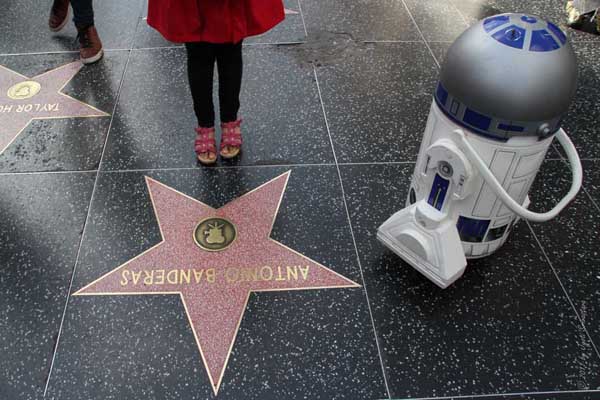 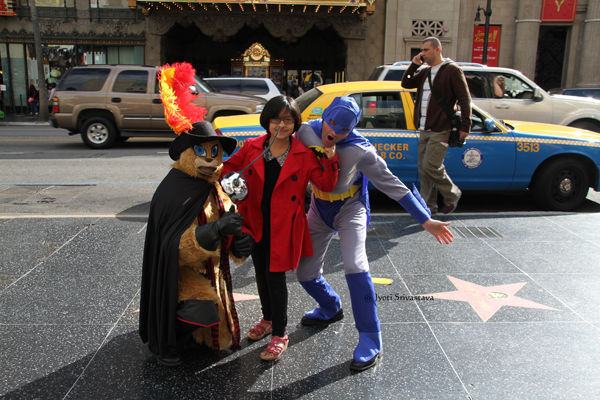 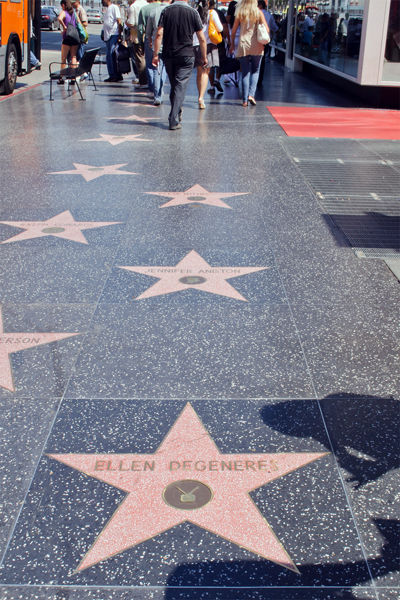 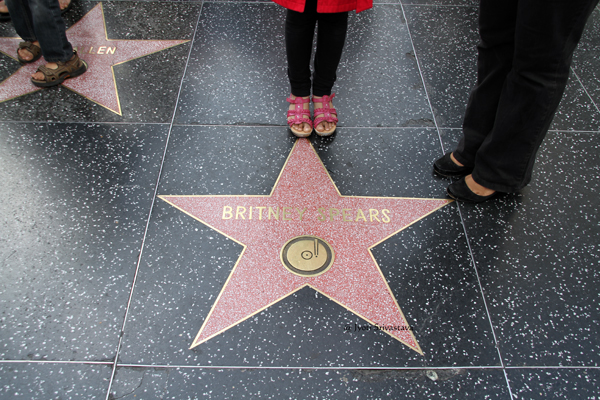 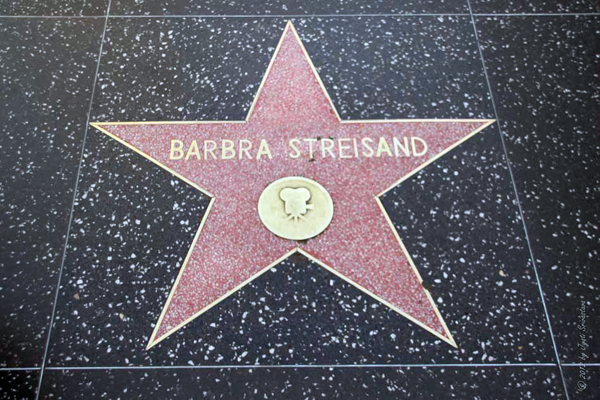 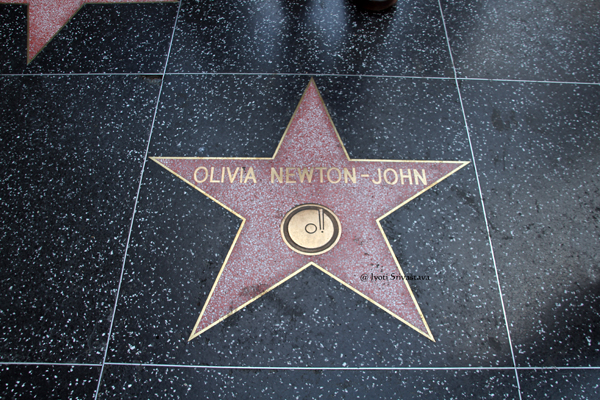 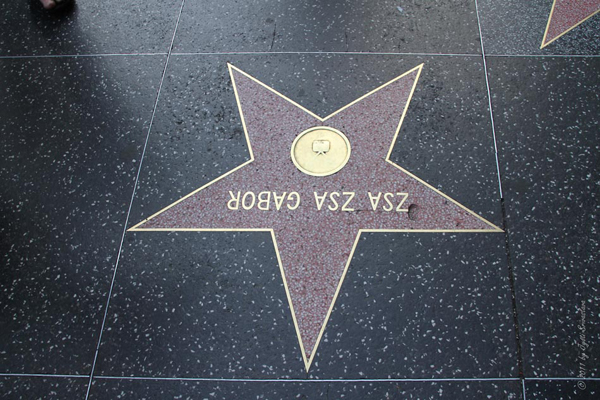 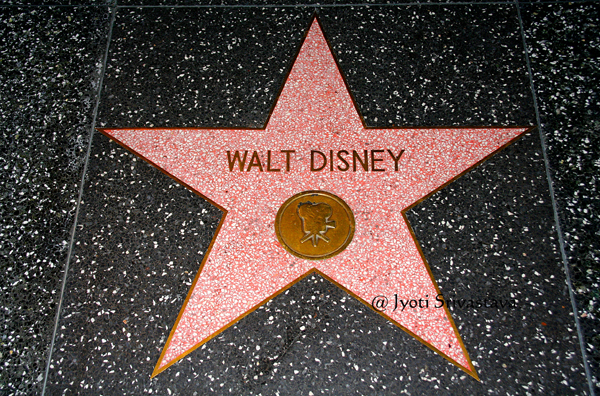 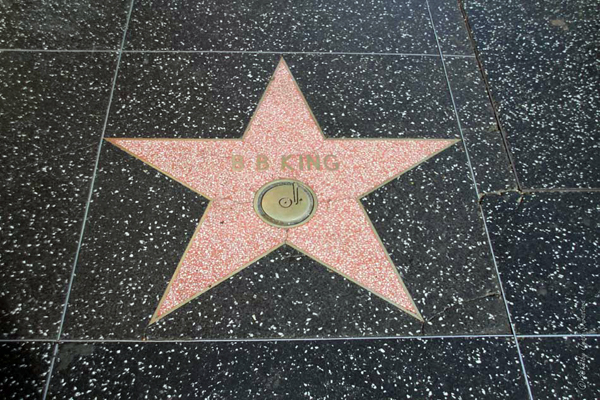 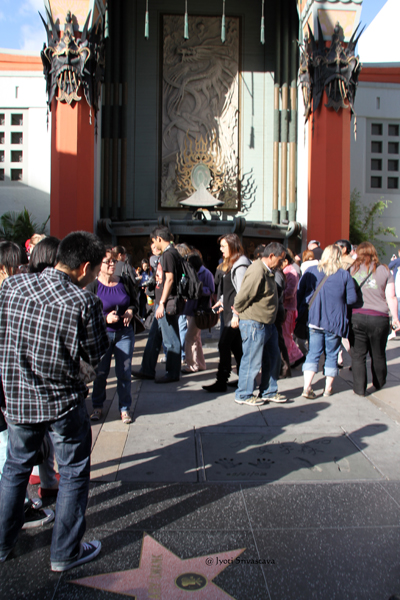 Along the Walk of Fame, there is another not-to-be missed attraction:  Forecourt of  TCL Chinese Theater with Star’s Footprints. , TCL Chinese theater [previously and better known as Grauman’s Chinese Theatre]  opened in 1927, is a Hollywood landmark and the home to countless gala movie premieres. The theater is also famous for  its  “Forecourt of Stars’ Foorprints” which has   cement blocks with signatures, handprints, and footprints  of stars immortalized in the legendary cement.  In some cases, celebrities left memento, along with  prints and signature, like Groucho Marx left an imprint of his cigar, and Daniel Radcliffe left an imprint of his wand from Harry Potter films. 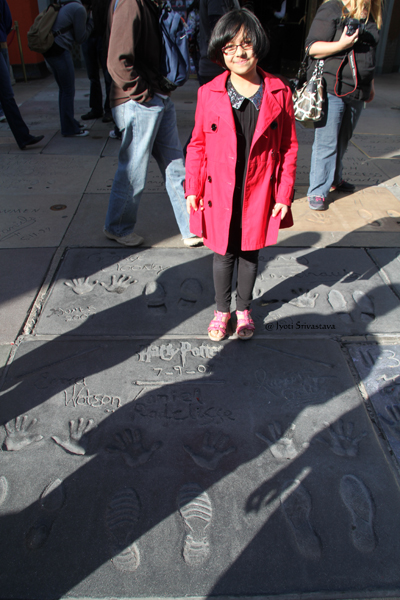 Niece Rhea with Harry Potter signage! In July of 2007, the three young stars of the “Harry Potter” movies – Daniel Radcliffe, Emma Watson & Rupert Grint – placed their hand, foot and wand-prints in the wet cement. Next to it is handprint, foorprint and signature of George Clooney and Jerry Weintraub. 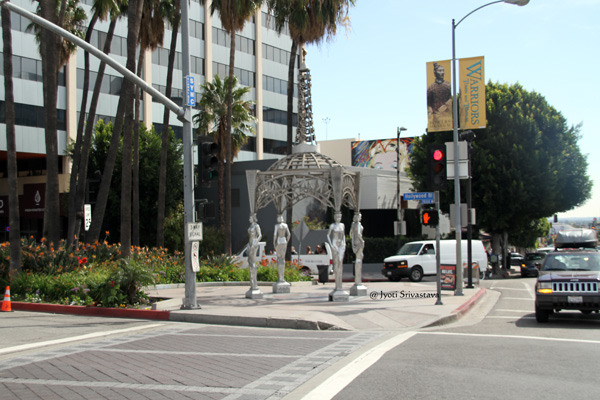 Four Ladies of Hollywood / Hollywood and La Brea Gateway.
The gazebo was dedicated on February 1, 1994.

The Four Ladies of Hollywood gazebo known officially as the “Hollywood and La Brea Gateway”, stands upon a small triangular island formed by the confluence of Hollywood Boulevard, Marshfield Way, and North La Brea Avenue at the westernmost extension of the Walk of Fame. It was commissioned in 1993 by the Los Angeles Community Redevelopment Agency Art Program and created by the architect, production designer, and film director Catherine Hardwicke as a tribute to the multi-ethnic women of Hollywood. The gazebo is a stainless steel stylized Art Deco lattice structure. The roof is an arched square supporting a circular dome, which is topped by a central obelisk with descending neon block letters spelling “Hollywood” on each of its four sides. Atop the obelisk is a small gilded weathervane-style sculpture of Marilyn Monroe in her iconic billowing skirt pose from The Seven Year Itch. The domed structure is held aloft by four caryatids sculpted by Harl West to represent the African-American actress Dorothy Dandridge, Asian-American actress Anna May Wong, Mexican actress Dolores del Río, and the multi-ethnic, Brooklyn-born actress Mae West. 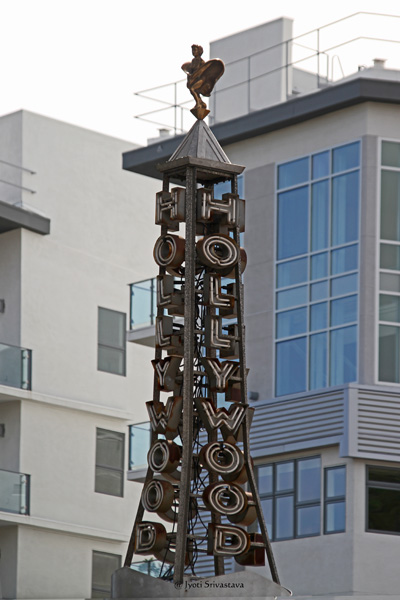 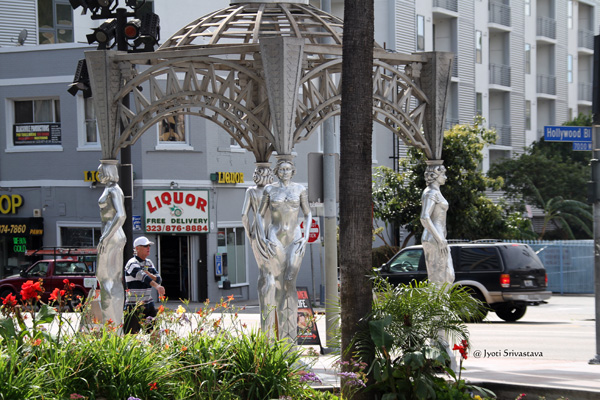