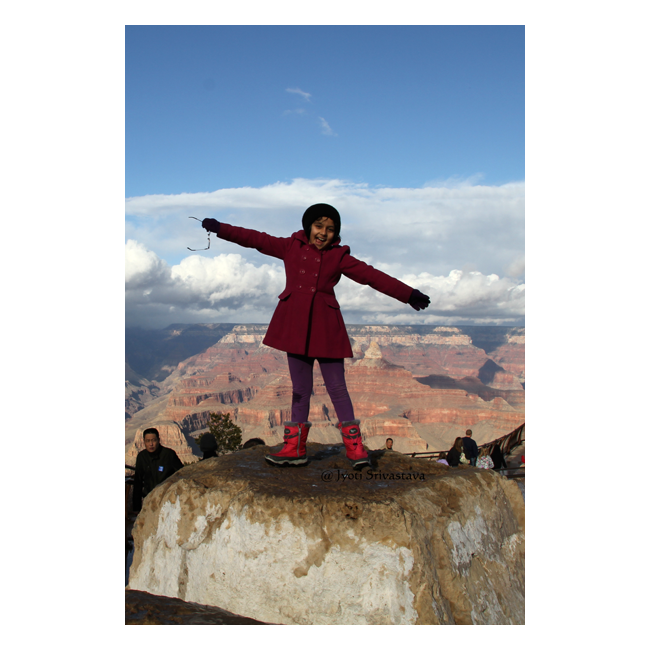 In 1979 UNESCO inscribed the Grand Canyon National Park in the World Heritage List.

Carved out by the Colorado River, the Grand Canyon [nearly 1,500 m deep] is one the most spectacular gorges in the world. Its breathtaking beauty comes from the violent natural forces of erosion that forged it. Its horizontal strata traces the geological history of the past 2 billion years. There are also prehistoric traces of human adaptation to a particularly harsh environment. 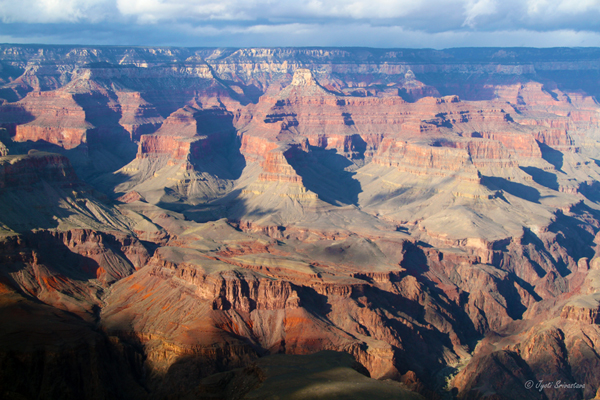 PERSONAL NOTE
My trip to Grand Canyon was in Feb. 2012. However,  for a long time I did not process the images. I did not even look at them. The reason being, that the day we took the trip, was not one of the best days. It was an extremely cold day with gray clouds. And then, there were some snow flurries on-and-off . The kind of weather that dulls even bright colors with a gray patina. Grand Canyon is all about vivid colors and hues, and the weather created a dull gray overcast over them. However, every now and then, there were a few cloud-breaks and rays of sunshine filtered through them. So I did get some good photos. But overall, I was not too enthusiastic about the trip, so hardly ever opened the photos. But past few days, I have been reading about UNESCO World Heritage sites, and Grand Canyon is one of them. So I opened images from the trip, and now I feel they are not too bad! In fact, now that I look at them, I like the play of clouds and sunshine. 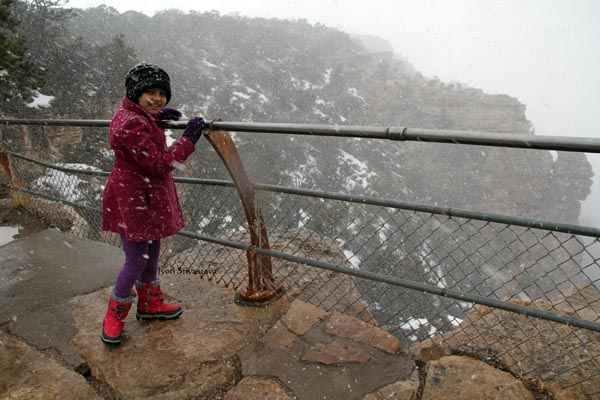 It was a very cold day with gray clouds, and to add there were snow flurries.. / Grand Canyon National Park, Arizona. 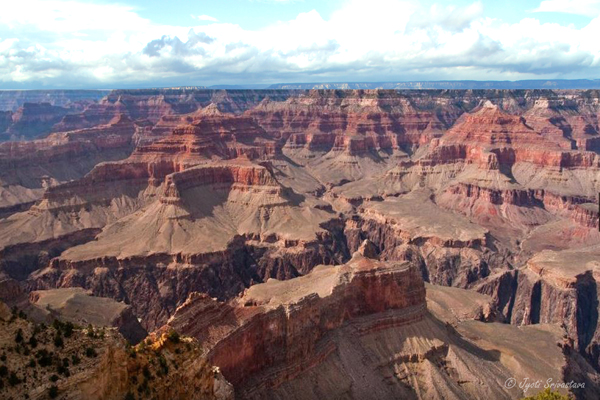 Below is a video made from the trip. The lovely girl in there is my beautiful niece.
There are also a few images of my sister and brother-in-law. And of course you can see the snow-flkurries, cloud and sunshine.

The Grand Canyon is remarkable for its few features: spectacular vastness, breathtaking beauty,  geographical history of past 2 billion years and it unveils the story of the human adaptation to extremely harsh environment!  It is also an exceptional example of  biological environments at different elevations and  equally diverse ecosystems.

VASTNESS: The centerpiece of the park is the Grand Canyon, a gorge of the Colorado River.  It is 0.9 miles deep [1.5-kilometer] and deep gorge ranges in width from 0.3 mile to 18.6 miles [500 m to 30 km].  It formed during some 6 million years of geological activity and erosion by the Colorado River on the raised Earth’s crust [1.5 miles /  2.5 km above sea level]. It divides the park into the North Rim and South Rim which overlook the 0.3 mile to 18.6 miles wide canyon.

SCENIC BEAUTY:  Grand Canyon is widely known for its exceptional natural beauty.   Scenic wonders within park boundaries include high plateaus, plains, deserts, forests, cinder cones, lava flows, streams, waterfalls, and one of America’s great whitewater rivers.  The buttes, spires, mesas and temples in the canyon are in fact mountains looked down upon from the rims. Ongoing erosion by the seasonal and permanent rivers produces impressive waterfalls and rapids of washed-down boulders along the length of the canyon and its tributaries.

GEOLOGICAL HISTORY: The Grand Canyon is among the earth’s greatest on-going geological spectacles. Nearly two billion years of the Earth’s geological history have been exposed as the Colorado River and its tributaries cut their channels through layer after layer of rock while the Colorado Plateau was uplifted.  The geologic record spans all four eras of the earth’s evolutionary history:  early and late Precambrian, Palaeozoic, Mesozoic and Cenozoic. The early Precambrian strata, known as the Vishnu Schist formation, are devoid of fossils. The first fossil evidence appears in the late Precambrian Bass Limestone with remains of early plant forms. Subsequent strata dating from the Palaeozoic era catalogue the sequence of local history, with both marine and terrestrial fossils demonstrating the periods in the distant past when the whole region was alternately submerged and raised. The Mesozoic era is less well illustrated within the park, but tracks made by early reptiles are found to the east in the Navajo Indian reservation. They are a few fossil remains of mammals from the early Cenozoic.

HUMAN ADAPTATION: For thousands of years, the area has been continuously inhabited by Native American who built settlements within the canyon and its many caves. The park contains more than 2,600 documented prehistoric ruins, including evidence of Archaic cultures (the earliest known inhabitants), Cohonina Indians along the South Rim, and Anasazi Indians on both the South Rim, North Rim, and within the Inner Canyon. Hualapai and Havasupai Indians moved into the canyons at this time, where they remained undisturbed until the Anglo-Americans arrived in 1860. Archaeological remains show the adaptation of human societies to severe climate and physiographic environment.

BIOLOGICAL and ECOLOGICAL MUSEUM: With habitats ranging from coniferous forests on the rims to desert at the bottom of the canyon, Grand Canyon National Park hosts an amazing variety of plant and animal life. More than 1,500 species of plants, 89 varieties of mammals, 47 sorts of reptiles, and 9 species of amphibians have been recorded in the park. At least 17 kinds of fish, including the endangered humpback chub and razorback sucker, swim in the waters of the Grand Canyon. Along with 355 other types of birds, the Southwestern willow flycatcher, peregrine falcon, bald eagle, California condor, and Mexican spotted owl, build their nests in the canyon’s trees and cliffs. Many of these are rare and endangered species. 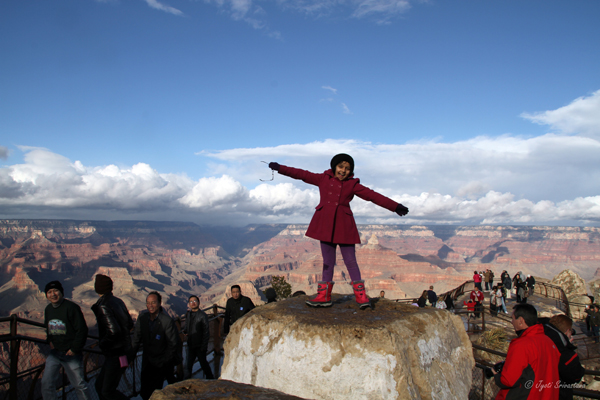 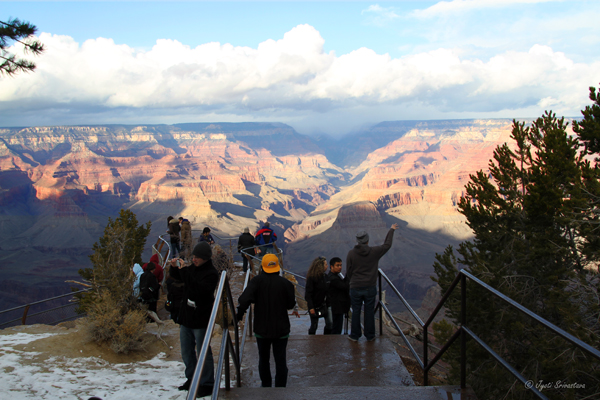 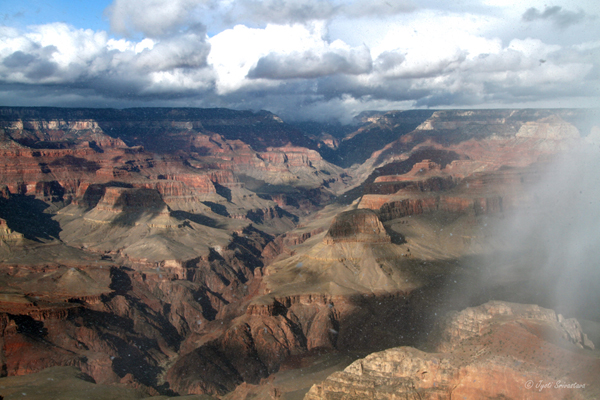 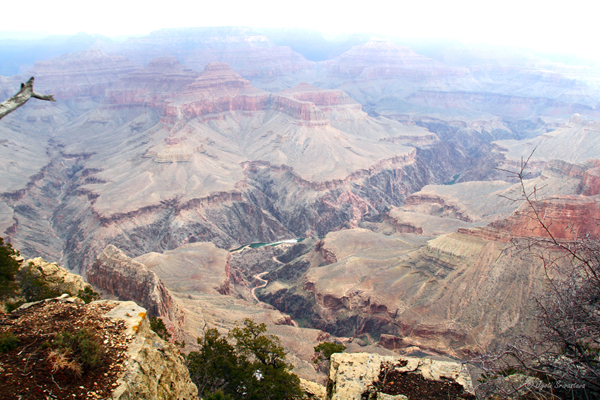 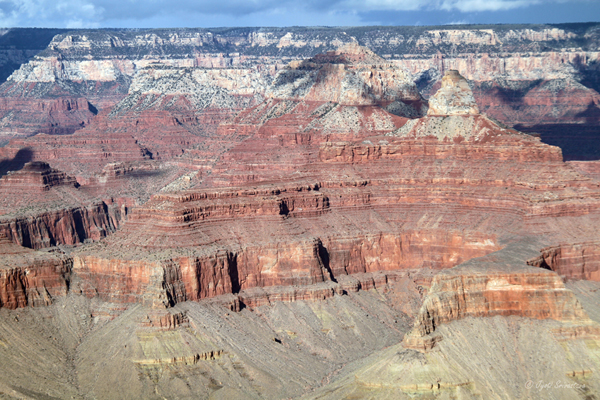 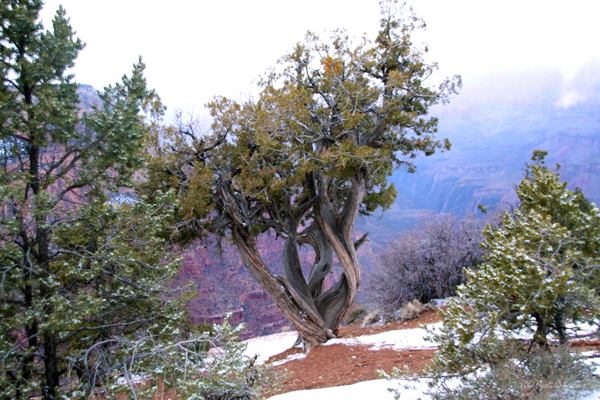 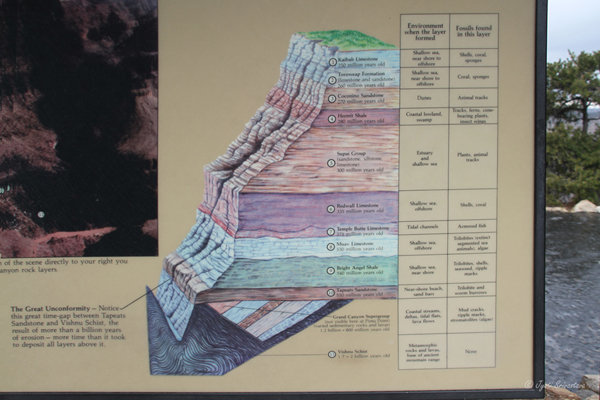 Grand Canyon / The horizontal strata traces the geological history of the past 2 billion years.

Something interesting is that many of the buttes are named after Hindu Gods. There is Shiva Temple, Vishnu Temple and Brahma Temple. There’s also a Buddha Temple. Perhaps the most interesting is the Vishnu Schist – formed 1.75 billion years ago – at the bottom of the Canyon in the Inner Gorge! 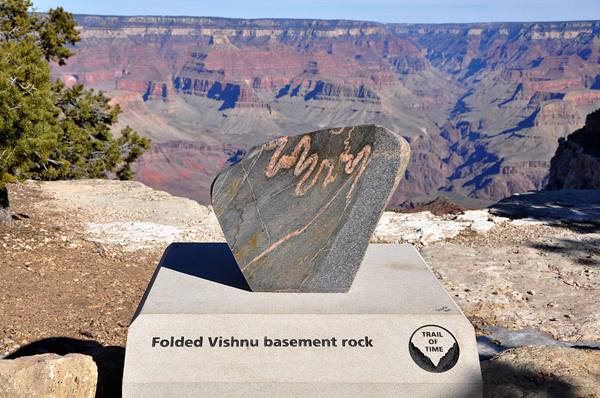 We also visited a the Grand Canyon Lodge, Hopi ouse and Hermit’s Rest 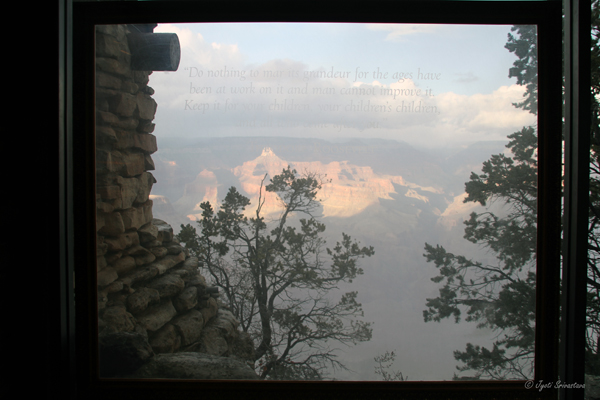 Grand Canyon Lodge: On the window is the text:
“Do nothing to mar its grandeur for the ages have been at work upon it and man cannot improve it. Keep it for your children – your children’s children and all who come after you.” – President Theodore Roosevelt. 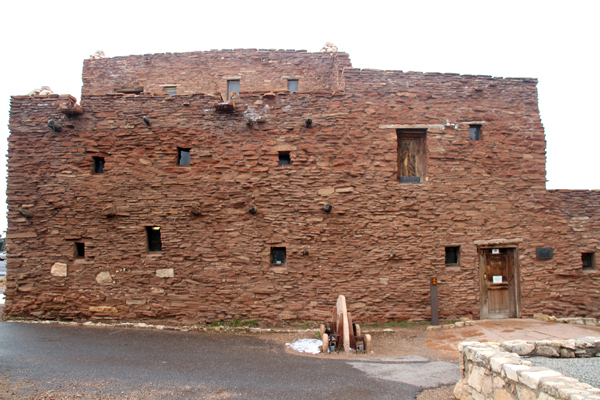 Wikipedia informs..
Hopi House is located on the South Rim of the Grand Canyon, within Grand Canyon National Park in the U.S. state of Arizona. Built in 1905 as concessioner facilities at the South Rim were being developed, it is the first of eight projects at the Grand Canyon that were designed by architect Mary Colter, along with Bright Angel Lodge, Hermit’s Rest, Lookout Studio, Phantom Ranch, Desert View Watchtower, Colter Hall and Victor Hall, (the latter two being employee dormitories). Hopi House was built by the Fred Harvey Company as a market for Native American crafts, made by artisans on the site. The Hopi, as the historic inhabitants of the area, were chosen as the featured artisans, and the building was designed to closely resemble a traditional Hopi pueblo. Hopi House opened on January 1, 1905, shortly before the El Tovar Hotel, located just to the west, was opened. 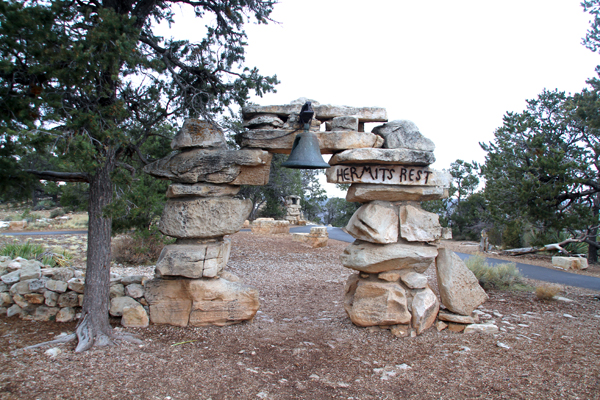 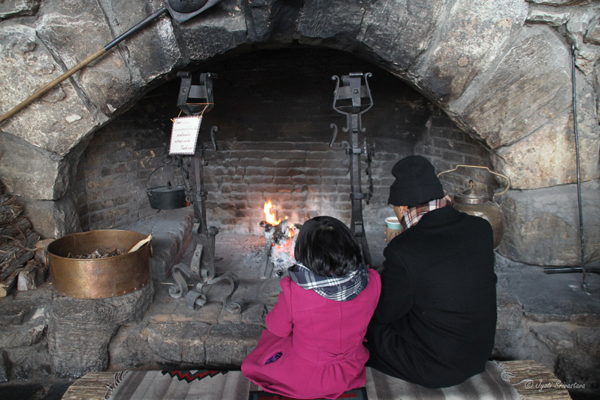 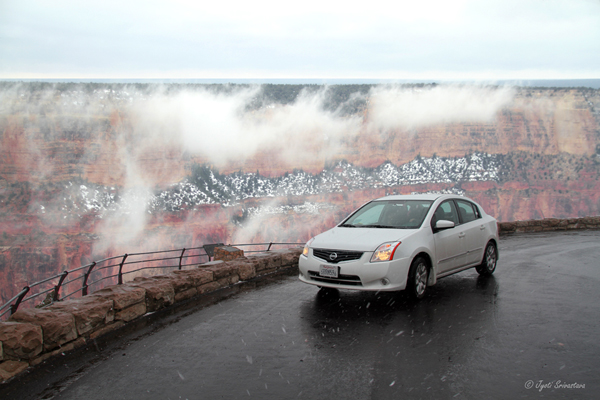 So Long Grand Canyon till we meet again!