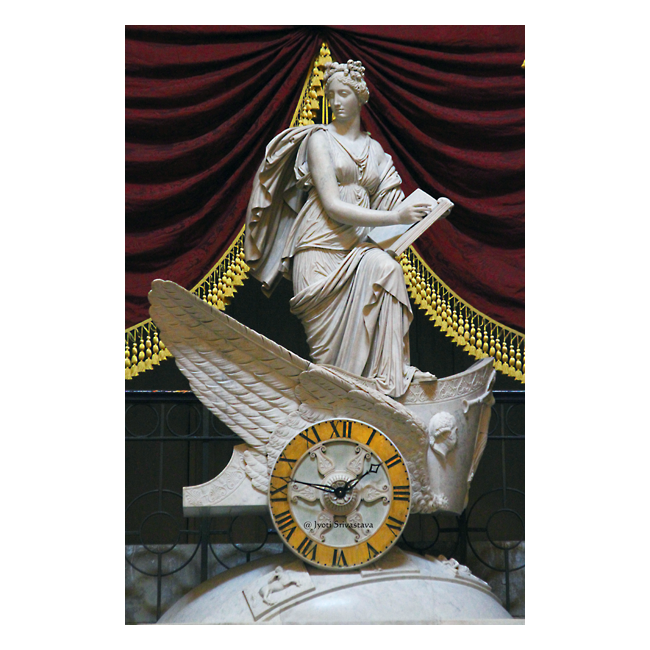 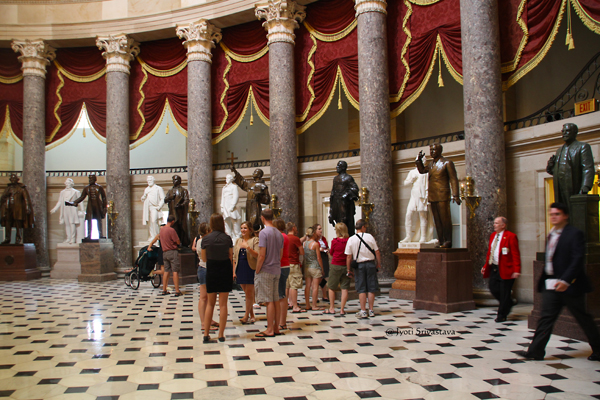 The National Statuary Hall Collection in the United States Capitol is composed of statues donated by individual states to honor persons notable in their history. Originally set up in the old Hall of the House of Representatives, renamed National Statuary Hall, the expanding collection has since been spread throughout the Capitol. The first statue was placed in 1870. By 1971, all 50 states had contributed at least one statue, and by 1990, all but five states had contributed two statues.

National Statutory Hall is located in the south of the Rotunda of the Capitol Building. It is also known as the Old Hall of the House. It’s semi-circular, two-story hall. It’s one of the earliest examples of Greek revival architecture in America.

Originally, all state statues were placed in National Statuary Hall. However, the aesthetic appearance of the Hall began to suffer from overcrowding until, in 1933, the situation became unbearable. At that time the Hall held 65 statues, which stood, in some cases, three deep. More important, the structure of the chamber would not support the weight of any more statues. Therefore, in 1933 Congress passed a resolution that:

The Architect of the Capitol, upon the approval of the Joint Committee on the Library, with the advice of the Commission of Fine Arts, is hereby authorized and directed to relocate within the Capitol any of the statues already received and placed in Statuary Hall, and to provide for the reception and location of the statues received hereafter from the States.

Under authority of this resolution it was decided that only one statue from each state should be placed in Statuary Hall. The others would be given prominent locations in designated areas and corridors of the Capitol. A second rearrangement of the statues was made in 1976 by authorization of the Joint Committee on the Library. To improve the crowded appearance of the collection, thirty-eight statues were rearranged in Statuary Hall according to height and material. Statues representing ten of the thirteen original colonies were moved to the Central Hall of the East Front Extension on the first floor of the Capitol. The remainder of the statues were distributed throughout the Capitol, mainly in the Hall of Columns and the connecting corridors of the House and Senate wings. Legislation was introduced in 2005 that would authorize the collection to include one statue from each U.S. Territory, and another bill introduced in 2010 provides for participation by the District of Columbia. 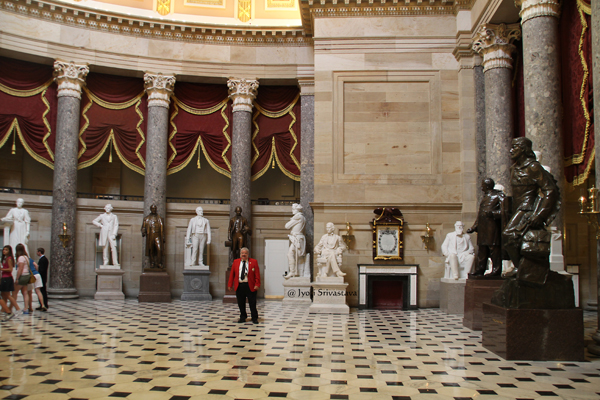 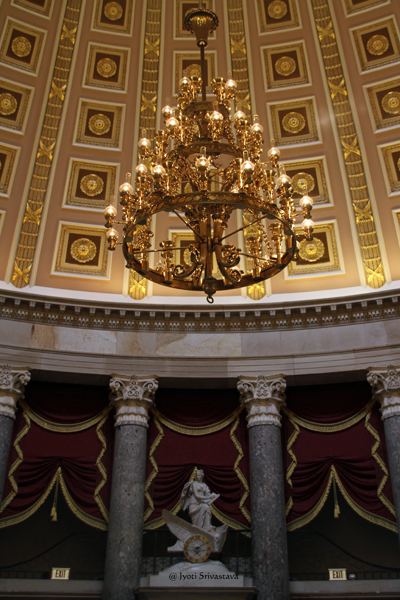 Of the many statues on display here, only two were commissioned for display in the original Hall of the House..
Liberty and the Eagle – by Enrico Cosini
Car of History Clock – by Carlo Franzoni 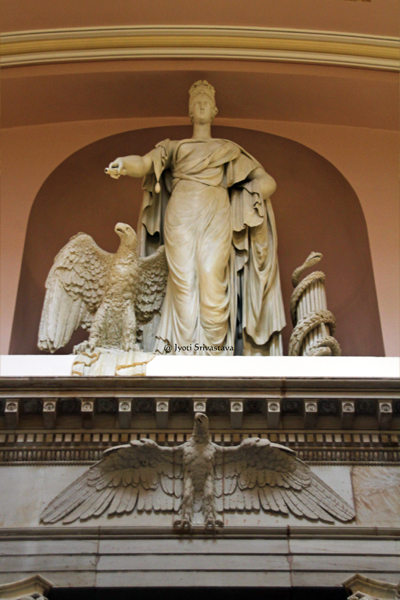 Liberty and the Eagle – by Enrico Cosini / National Statutory Hall

Placed between 1817 and 1819, this group originally stood above the Speaker’s desk when the House of Representatives met in this space. An American eagle stands to Liberty’s right, and the scroll in her right hand is the Constitution of the United States. To her left a serpent, the symbol of wisdom, is entwined around a section of a column..

When the House of Representatives moved into its new larger chamber and the old vacant chamber became a thoroughfare between the Rotunda and the House wing. In 1864, Representative Justin Morrill, proposed make this hall as a National Statuary Hall, which became a law on July 2, 1864. It provides that…
… the President is hereby authorized to invite each and all the States to provide and furnish statues, in marble or bronze, not exceeding two in number for each State, of deceased persons who have been citizens thereof, and illustrious for their historic renown or for distinguished civic or military services such as each State may deem to be worthy of this national commemoration; and when so furnished the same shall be placed in the Old Hall of the House of Representatives, in the Capitol of the United States, which is set apart, or so much thereof as may be necessary, as a national statuary hall for the purpose herein indicated. 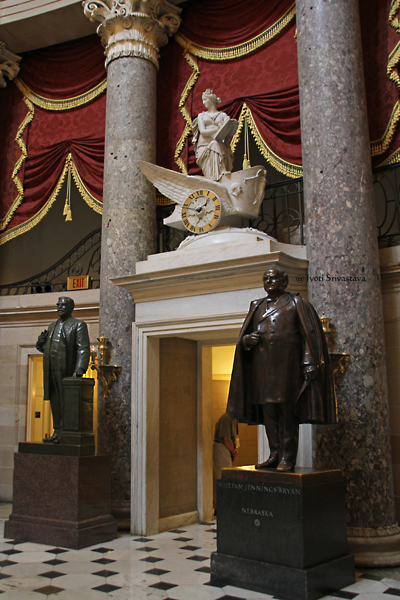 The Car of History Clock – by Carlo Franzoni
Marble/1819.

Clio, the Muse of History, stands in a winged chariot representing the passage of time and records events as they occur. The car rests on a marble globe on which signs of the Zodiac are carved in relief. The chariot wheel is the face of the clock; its works are by Simon Willard. 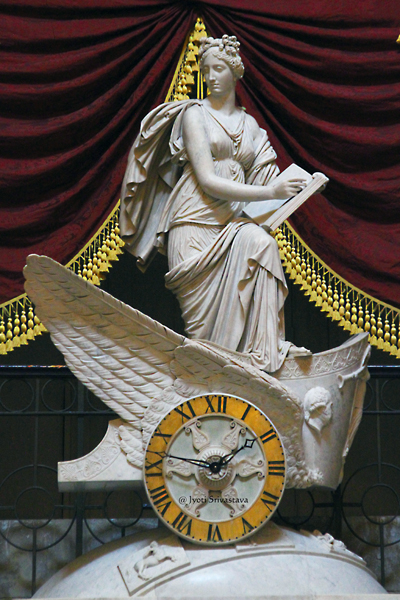 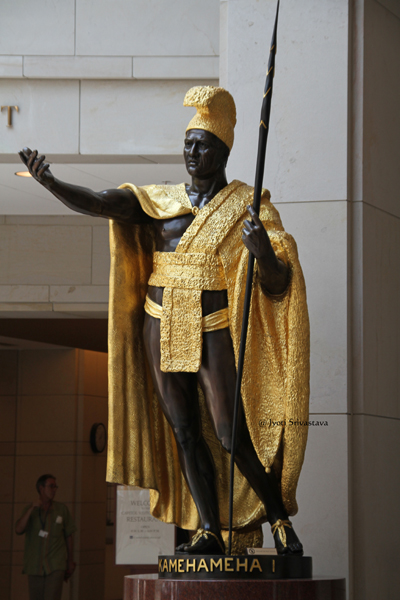 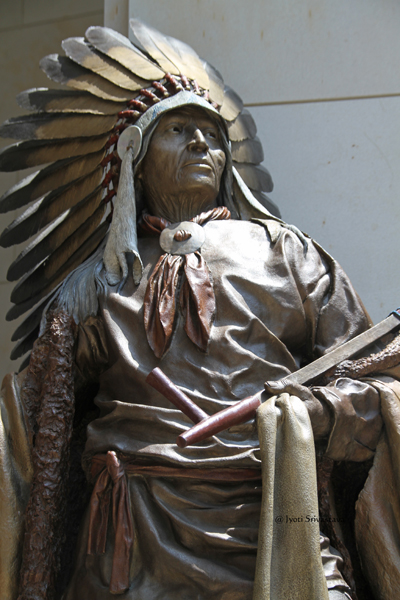 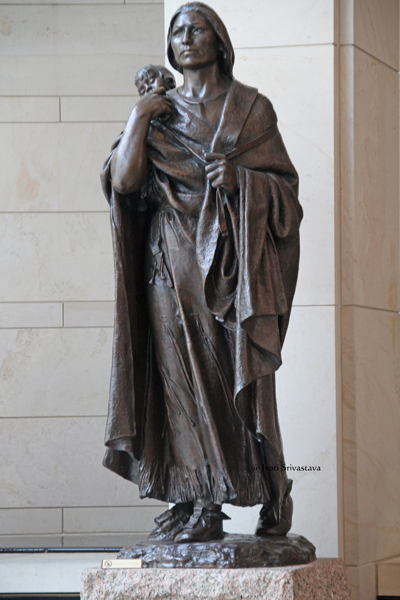 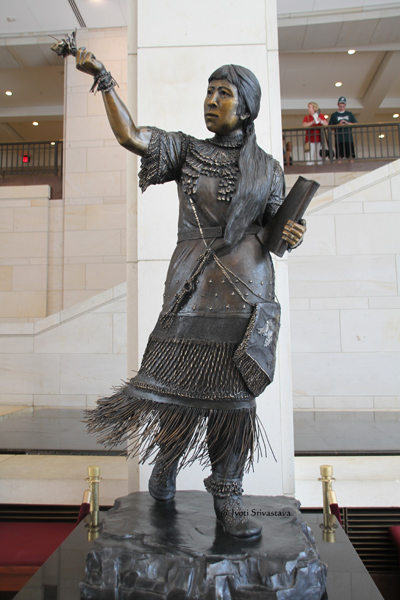