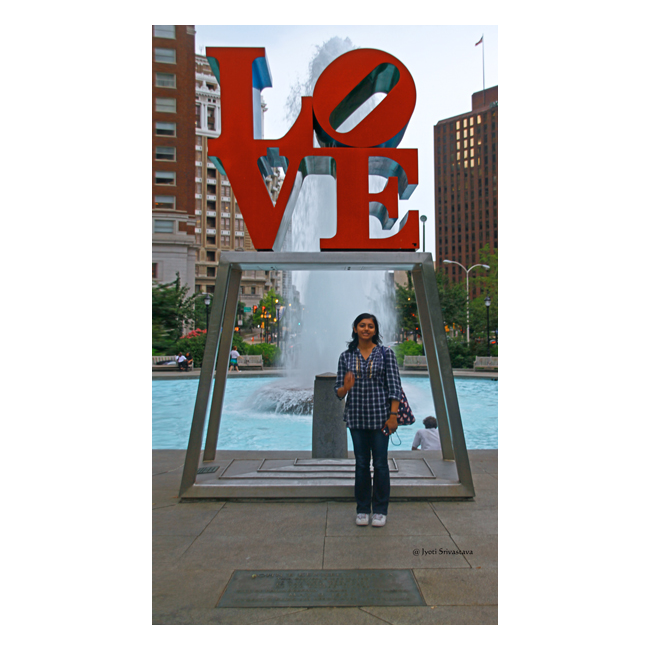 Robert Indiana, born Robert Clark (born September 13, 1928), is an American artist and has played a central role in the development of Pop Art movement of the 1960s. A self proclaimed “American painter of signs,” Indiana has created a highly original body of work that explores American identity, personal history and the power of abstraction and language. His work often consists of bold, simple, iconic images, especially numbers and words like EAT, HUG, and, his best known example, LOVE.

Robert Indiana spent his childhood in and around Indianapolis. After military service, he attended the School of the Art Institute of Chicago on the GI Bill, graduating in 1953 with a fellowship to study in Edinburgh. Upon his return to the United States in 1954, he settled in New York City. In 1958 he changed his last name to Indiana, assuming what he called his “nom de brush” and acknowledging his roots in the American Midwest. 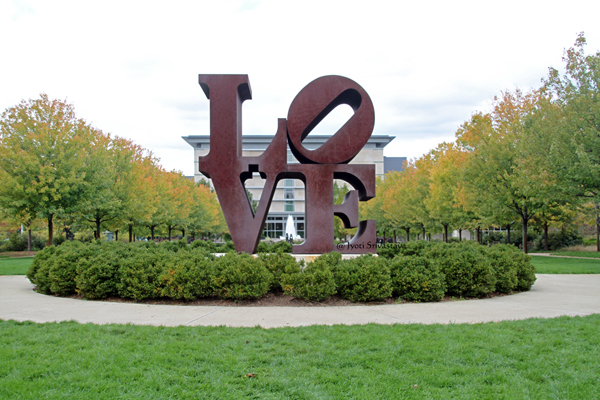 His “LOVE” print, was first created for the Museum of Modern Art’s Christmas card in 1965. It consists of the letters LO over the letters VE,  the letter O is canted sideways so that its oblong negative space creates a line leading to the V.  It had  green and blue spaces backing red. It quickly permeated wider popular culture, and was adopted as an emblem of the “Love Generation.” On Valentine’s Day, Feb. 14, 1973, the U.S. Postal Service issued Indiana’s design as a commemorative stamp.

LOVE’s original rendering in sculpture was made in 1970 and is displayed in Indiana at the Indianapolis Museum of Art. The material is COR-TEN steel. Indiana’s LOVE design has since been reproduced in a variety of formats for rendering in displays around the world. has become an icon of modern art. The universality of the subject, to which Indiana continues to return, is further evidenced by his translation of LOVE into AHAVA (Hebrew) and AMOR (Spanish). Versions of the sculpture now exist in Hebrew, Chinese, Italian, and Spanish, as well as the original English.

“I had no idea LOVE would catch on the way it did. Oddly enough, I wasn’t thinking at all about anticipating the Love generation and hippies. It was a spiritual concept. It isn’t a sculpture of love any longer. It’s become the very theme of love itself.”
— Robert Indiana

I have seen two “LOVE” sculptures.
Original in Indiana Museum of Art – image above.
Another in Philidelphia’s John F. Kennedy Plaza, better known as LOVE Park – image below. 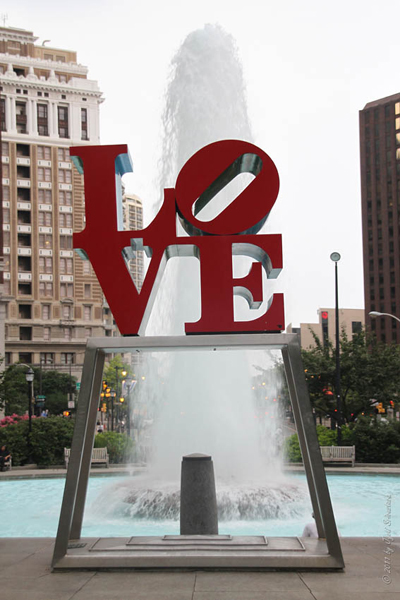 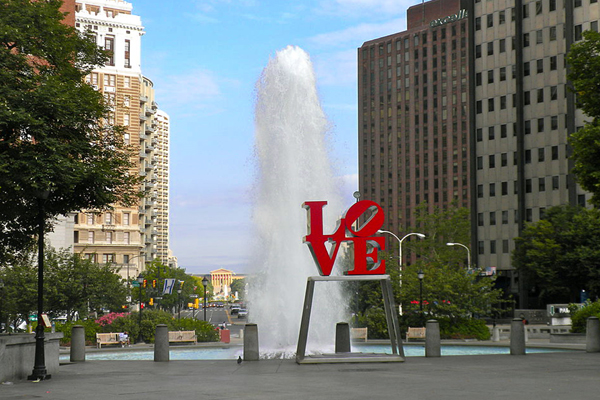 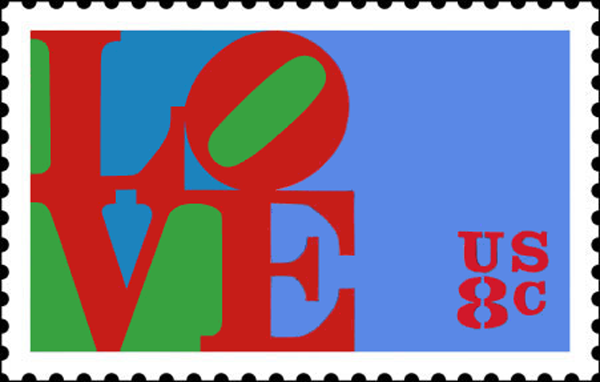 This famous design by pop artist Robert Indiana graced the first Love stamp in 1973. The American public embraced it, and more than 300 million stamps were printed. Created in the 1960s, Indiana’s design has become a cultural icon, and visitors to Philadelphia can even enjoy it in sculpture form. 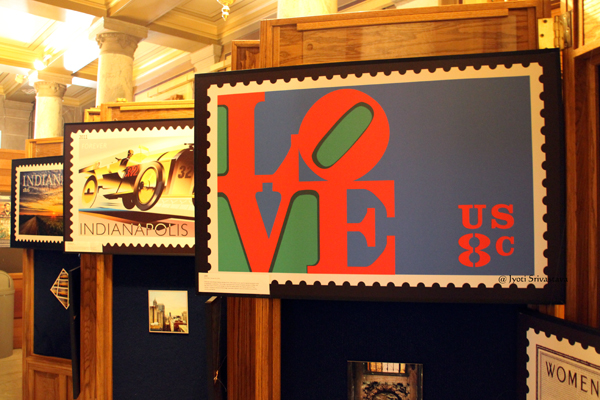 In 2008, Indiana created an image similar to his iconic LOVE but this time showcasing the word “HOPE”, and donated all proceeds from the sale of reproductions of his image to Democrat Barack Obama’s presidential campaign, raising in excess of $1,000,000. A stainless steel sculpture of HOPE was unveiled outside Denver’s Pepsi Center during the 2008 Democratic National Convention. The Obama campaign sold T-shirts, pins, bumper stickers, posters, pins and other items adorned with HOPE. Editions of the sculpture have been released and sold internationally and the artist himself has called HOPE “Love’s close relative”.

For Valentine’s Day 2011, Indiana created a similar variation on LOVE for Google, which was displayed in place of the search engine site’s normal logo. 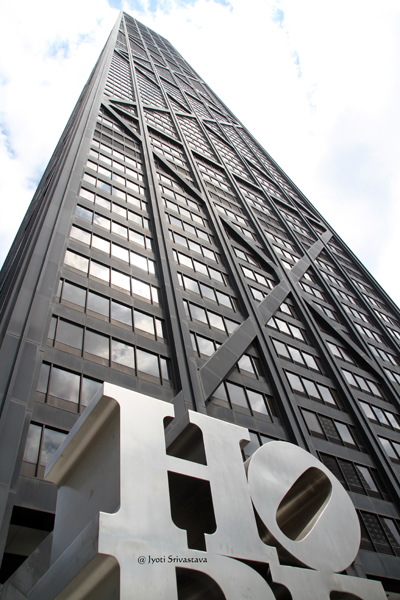 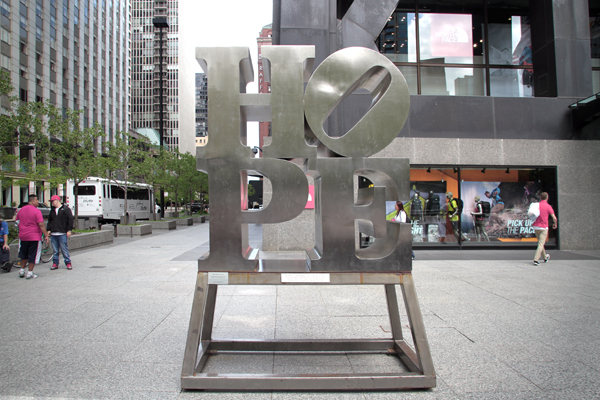 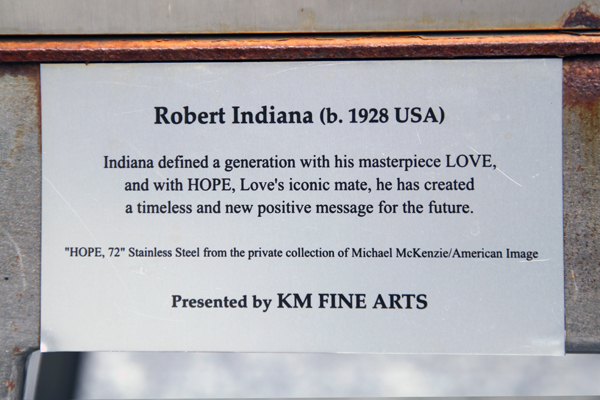 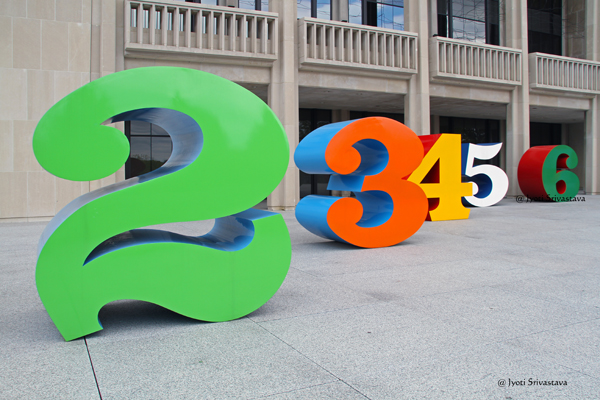 “Numbers fill my life. They fill my life even more than love. We are immersed in numbers from the moment we’re born. Love? Love is like the cherry on top of the whipped cream. Our very lives are structured on numbers. Birthdays, age, addresses, money – everywhere you turn, there are numbers.

. . . I’ve been involved with numbers much longer than I have been with love. My love affair with numbers goes way, way back. People don’t stop to think how beautiful numbers really are, perhaps for the same reason people don’t stop to think how beautiful words are. Other cultures have thought about it. . . In our culture we have words – marks the typewriter makes – and they’re not very attractive, are they? It’s the role of the artist – my particular role, if you will – to make words and numbers very, very special.”
– Robert Indiana
Reference.. Robert Indiana website.. Exploring Numbers..  click here..

I never had the exposure to techniques and so forth that children have today with art workshops, but I always had crayons and pencils and still have work going right back to when I was five or six years old.
-Robert Indiana.