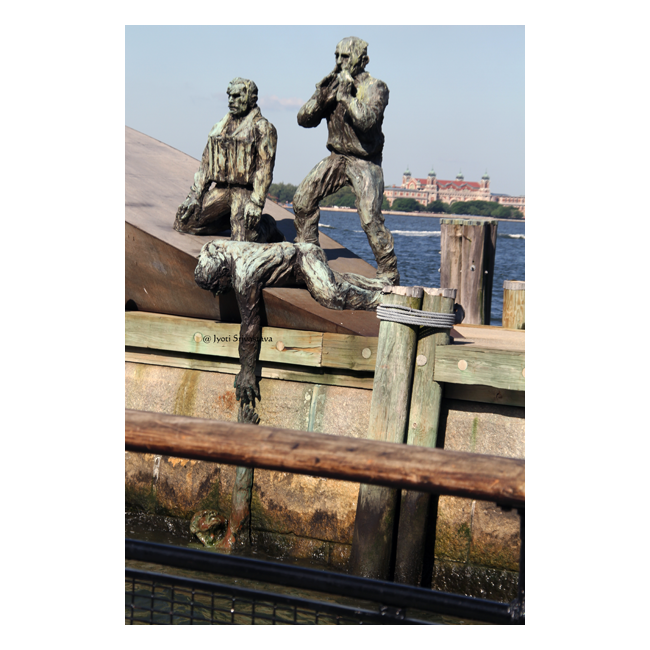 Battery Park is a 25 acre public park located at the Battery, the southern tip of Manhattan Island in New York City, facing New York Harbor. It is one of the oldest public parks in New York City.  The Battery is named for the artillery batteries that were positioned there in the city’s early years to protect the settlement behind them.  The Battery was the center of Evacuation Day celebrations commemorating the departure of the last British troops in the United States after the American Revolutionary War. The relatively modern park was created by landfill during the 1850s, resulting in a landscaped open space at the foot of the heavily developed mainland of downtown. In 1855, Castle Garden, situated inside the Park, became the world’s first immigrant depot. Decades before Ellis Island was built or the Statue of Liberty installed, millions of newcomers arrived at Battery Park from Europe and elsewhere. Now skyscrapers occupy most of the original land, stopping abruptly where the park begins. 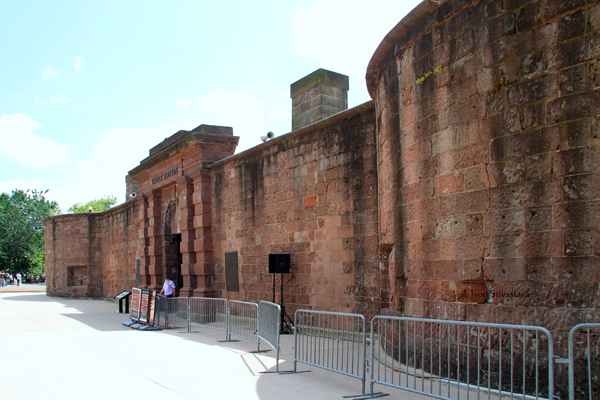 Between 1808 and 1811, this circular sandstone fort  was built as one of the five forts erected to defend New York Harbor. It was known as the West Battery.  The fort originally stood on a small island that was linked to Manhattan by a 200- foot wooded causeway and drawbridge. In 1815, it was renamed Castle Clinton [for Governor De Witt Clinton]. In 1823, it ceded to the City. Around this time, the park was extended by landfills to an area of about ten acres.  Another massive landfill project got underway in 1853 and was completed in 1872.  With the landfill, the island got attached to the mainland.

The fort held 28 cannons, but never saw military action. In 1823 the US Army gave Castle Clinton to New York City, which used the structure in many ways over the next century. [In 1824, Castle Clinton was renamed Castel Garden and served as an amphitheater and in 1845 it was renovated into a concert hall. In 1855 it served as Emigrant Landing Depot, when 8 millions newcomers entered the United States between 1855 to 1890. From 1896 to 1941, it served as New York City Aquarium]

In 1946, it was designated as a National Monument, and was restored to its original appearance as a stone fort. It now serves as National Park Service Visitor Center. 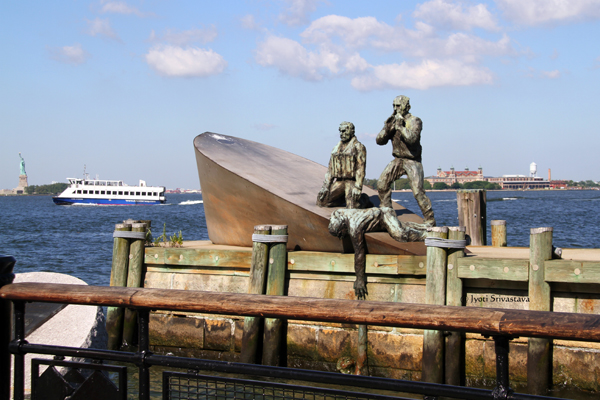 Commissioned by the American Merchant Mariners’ Memorial, Inc., this memorial was conceived in 1976. In 1988, after an extensive competition, the artist Marisol Escobar, was chosen to develop her design. Situated off-shore from the north end of Battery Park and just south of Pier A, the monument stands on a rebuilt stone breakwater in the harbor. The bronze figural group and boat are based on an actual historical event; during World War II, a Nazi U-boat attacked a merchant marine vessel, and while the mariners clung to their sinking vessel, the Germans photographed their victims. Marisol developed a series of studio sketches from this photograph, then fashioned a clay maquette as her winning design proposal for the monument. The work was dedicated on October 8, 1991. 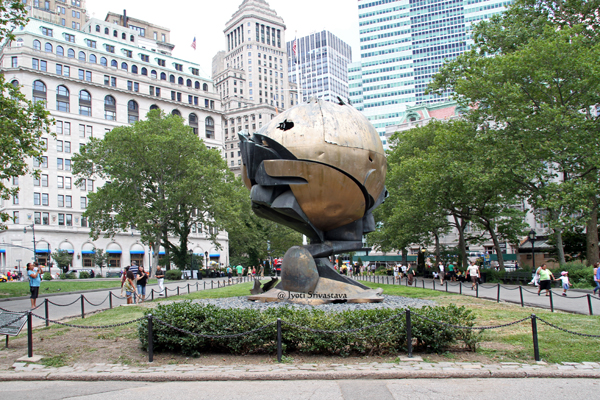 The Sphere – by Fritz Koenig

The Sphere – by Fritz Koenig

The Sphere by Fritz Koenig originally stood at the center of the plaza of the World Trade Center a few blocks away. It was damaged in the September 11 attacks. It was reinstalled in a temporary location in the northern section of the Battery Park. The Sphere, standing 25 feet high, was meant to symbolize world peace through world trade, and was, at its original location, in the center of a ring of fountains.

A plaque alongside The Sphere reads as follows:
For three decades, this sculpture stood in the plaza of the World Trade Center. Entitled The Sphere, it was conceived by artist Fritz Koenig as a symbol of world peace. It was damaged during the tragic events of September 11, 2001, but endures as an icon of hope and the indestructible spirit of this country. The Sphere was placed here on March 11, 2002, as a temporary memorial to all who lost their lives in the terrorist attacks at the World Trade Center.
This eternal flame was ignited on September 11, 2002, in honor of all those who were lost. Their spirit and sacrifice will never be forgotten. 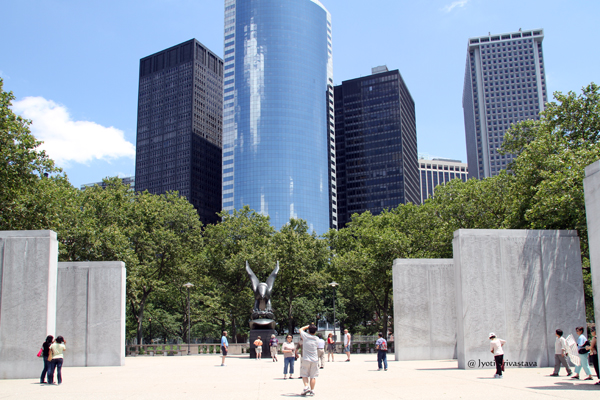 A World War II war memorial, the East Coast Memorial is one of three war memorials in the United States administered by the American Battle Monuments Commission; the others are the West Coast Memorial to the Missing of World War II in San Francisco and the Honolulu Memorial. The memorial commemorates U.S. servicemen who died in coastal waters of the western Atlantic Ocean during the Battle of the Atlantic. A total of 4,609 names are inscribed on both sides of eight 19-foot-tall granite pylons. The pylons are arranged in two rows of four each. Between the two rows stands a bronze statue of an eagle, erected on a black granite pedestal. The eagle faces the Statue of Liberty in New York Harbor.

The memorial was designed by the architectural firm of Gehron & Seltzer. The eagle statue was created by Albino Manca, an Italian-born sculptor. The granite slabs were set up in October 1959, while the sculpture was installed on February 4, 1963. The memorial was dedicated by President John F. Kennedy on May 23, 1963 at a ceremony which included addresses by New York mayor Robert F. Wagner, Jr., Senate majority leader Mike Mansfield, and the President. The destroyer USS Mitscher fired a salute from nearby offshore.[ 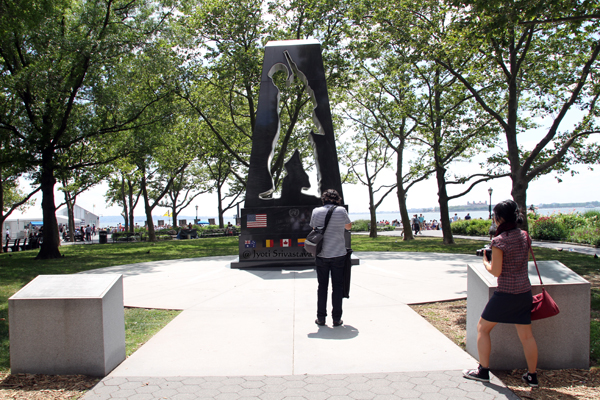 This monument in Battery Park north of Castle Clinton, honors military personnel who served in the Korean Conflict (1950–1953). The memorial, dedicated in 1991, was designed by Welsh-born artist Mac Adams and is notable as one of the first Korean War memorials erected in the United States. 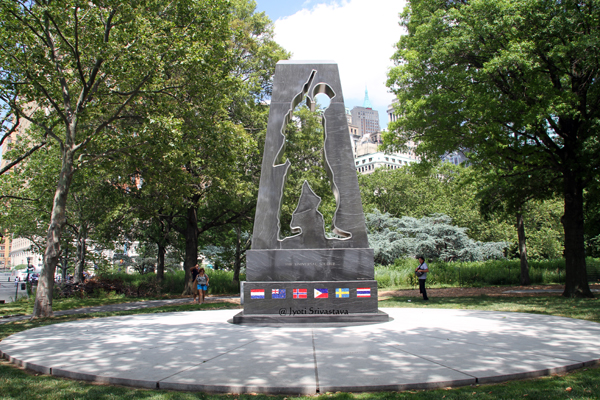 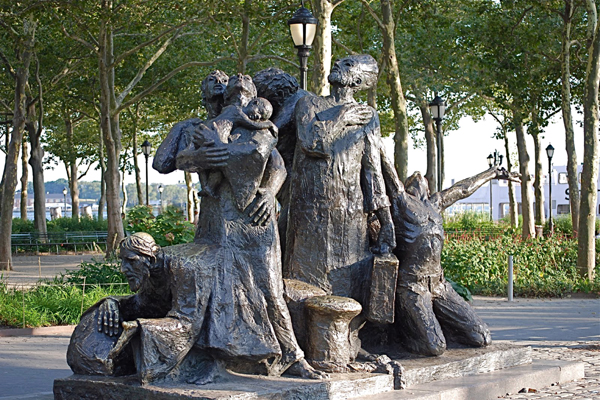 Sculptor Luis Sanguino celebrates the diversity of New York City and the struggle of immigrants in this heroic-sized bronze figural group. The sculpture depicts figures of various ethnic groups and eras, including an Eastern European Jew, a freed African slave, a priest, and a worker. The figures’ expressive poses emphasize the struggle and toil inherent in the experience of the immigrant or dislocated person.