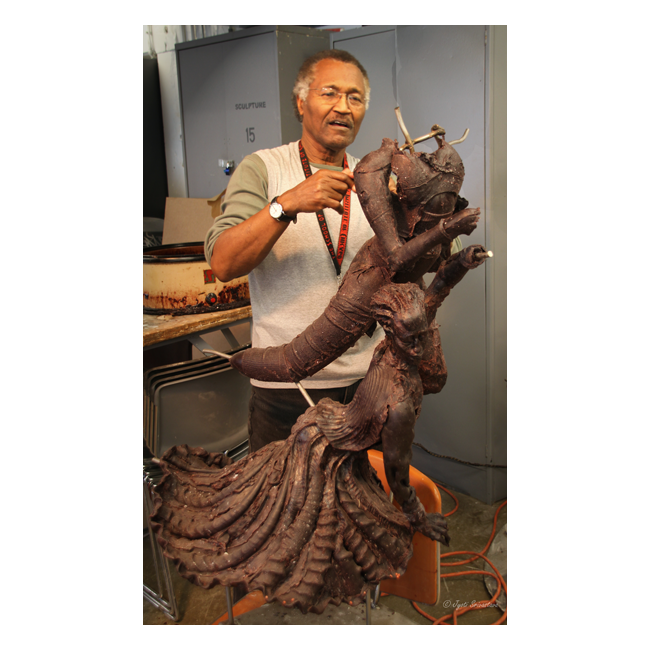 Preston Jackson is professor emeritus of sculpture at the School of the Art Institute [SAIC] in Chicago. He is the head of the figurative area and has served as chair of the Sculpture Department. Preston Jackson received his BFA from Southern Illinois University and MFA from the University of Illinois. In 1998, he was chosen a Laureate of the Lincoln Academy of Illinois, the highest honor given to individuals in the State. He also received the Rhodell Owens Award, Peoria City Beautiful.

Although Preston Jackson teaches at SAIC, Chicago, he is based in Peoria. He is co-founder of the Contemporary Art Center [CAC] of Peoria, which is a cultural hub featuring exhibitions, artist studios, open mic for poetry, salsa dances, and instruction in art, dance, yoga and tai chi. He has made immense contribution to the art community in Peoria, and I made a separate trip to Peoria, to see his studio there… click here.. However, this post is about my visit to his studio at the historic Printers Row neighborhood in Chicago. 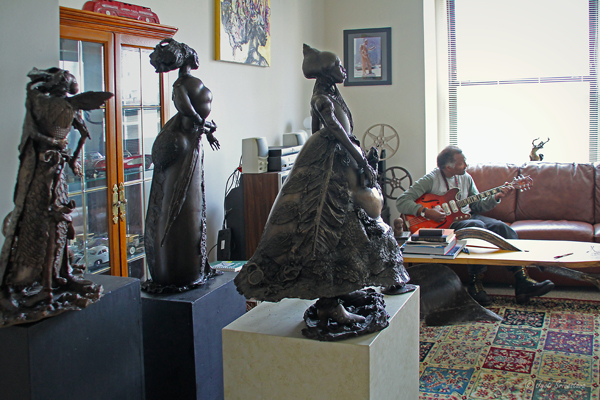 Preston Jackson’s art – both painting and sculptures – are narrative!  His art  is his way of storytelling. Through his art, he makes a deep  connection with who we are, where we came from, and where we are headed. His art is incredibly detailed, showing characters and events from our past. There are many hidden symbolism to be explored.

One of the spin-offs of his narrative style is his series “Fresh from Julieanne´s Garden”.   In his words:  “It reveals the lives and personalities of our ancestors and the stories of all of our forbears who lived in the Southern United States in the 19th and early 20th century.”  This work reflects an admiration for the resolution and resiliency of each individual.

In January-March, 2006, he had a solo exhibition – “Fresh from Julieanne’s Garden” at the Chicago Cultural Center. He was also awarded a Regional Emmy for hosting “A Legacy in Bronze”, a television show featuring his Julieanne´s Garden sculptures. It is presented on YouTube in five segments. Produced by Lorraine Render.click here.. 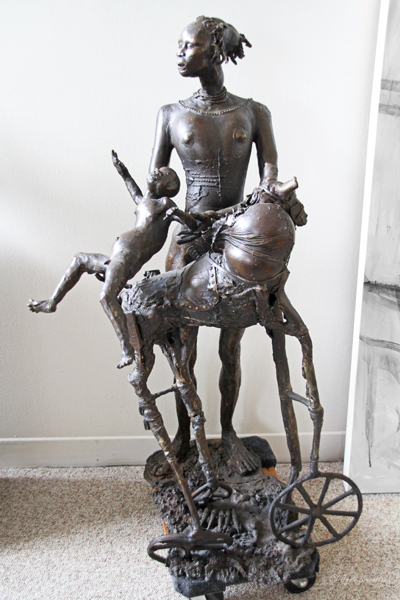 Guardian Sacrifice from the series “Fresh from Julieanne’s Garden”..
4’h / cast bronze.
Although his body lengthened and began to sprout patches of thin hair, he still was her small beloved parcel from heaven, she thought.
Now came that moment that all parents dread, the giving of a child to that awful rich man’s game known as war. It has always been known that people of lower economic status are the first and most called upon to surrender their children. Zeke, as he was called, is seen being placed on an already dead form of a warhorse who is portrayed as weak and beaten, and who assures us that he and his rider will not return. 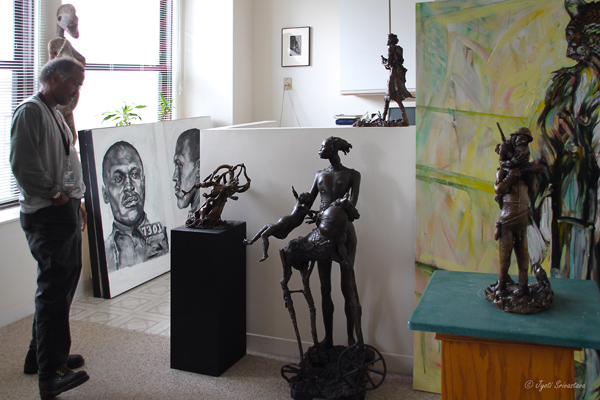 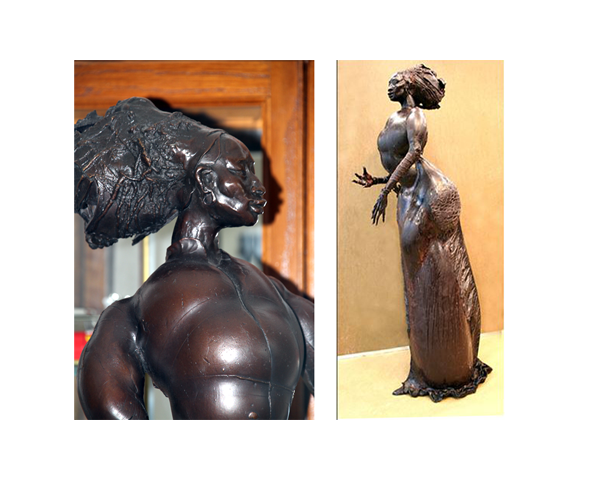 Claire Michelle from the series “Fresh from Julieanne’s Garden”..
16″x 14″x 30″h / cast bronze.
It was a well-known fact that Claire Michelle was the most striking woman in the State of Kentucky. Many times she was told that her beauty would somehow work against her because of the atmosphere of the times. Slavery had ended just 30 years before, and the staunch Southerners were still reeling from the defeat and the social upheaval within their culture.

Claire Michelle walks slowly and cautiously in the evening of the day, when shapes and colors are subdued, and the lack of sunlight creates a blending of all hues into a purplish evening glow. Her knowledge of survival was handed down through generations of brave, intelligent women of her family. They taught her the skills of disguising her feminine beauty, plus the art of physically freeing herself from dangerous situations. If that failed, and her life was in jeopardy, her last resort would be to use her umbrella, which held a spear tip that somehow survived the Middle Passage and served as a symbol of her family’s perseverance. 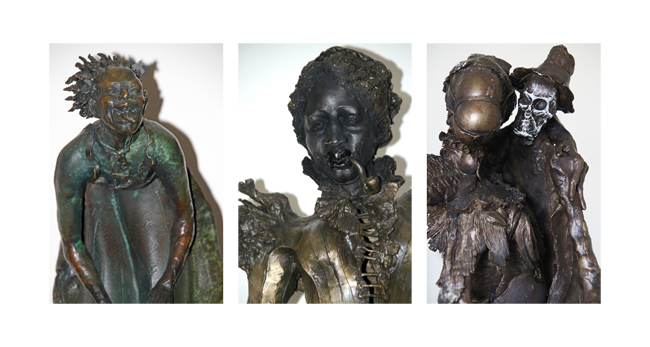 Like his sculptures, Preston’s paintings are follow the narrative style,
and tell stories fro his observations of cultures and people and from our history. 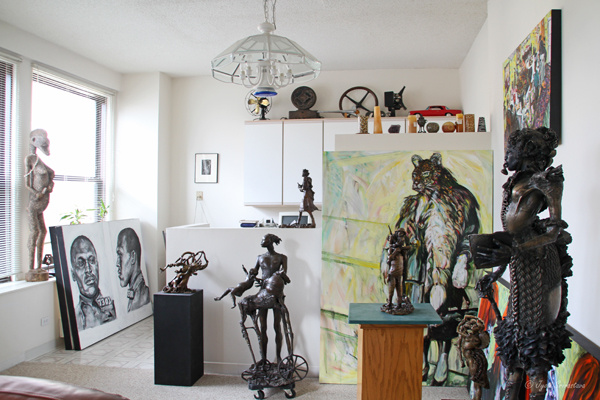 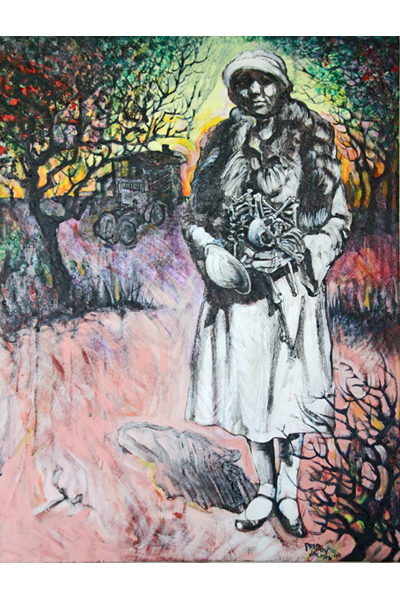 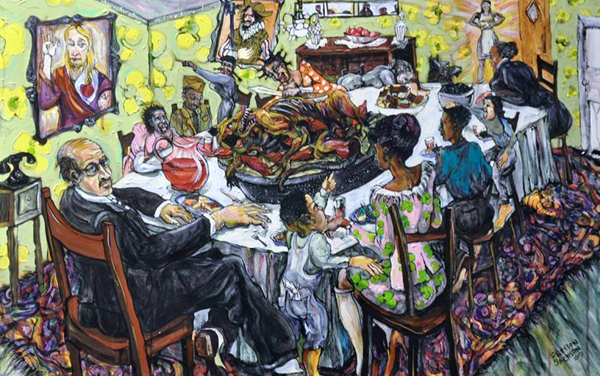 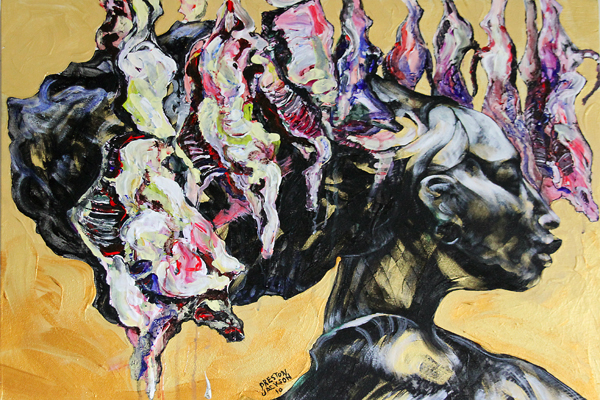 Preston also collects mug-shots of prisoners, and often paints them. This is like giving life to their lives forgotten. 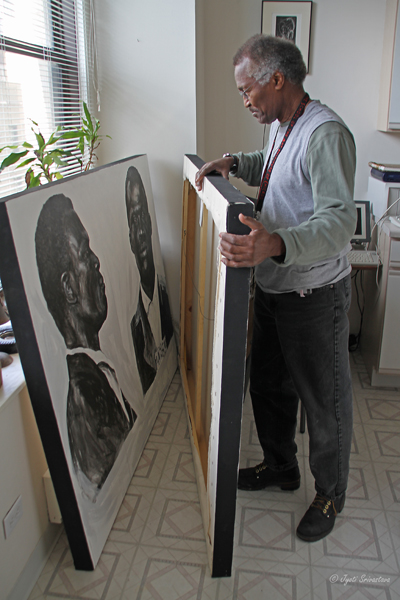 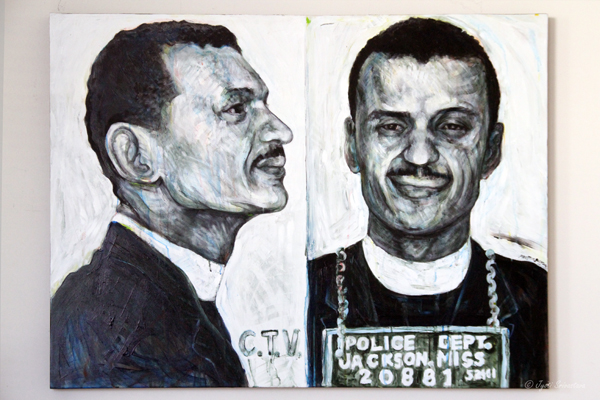 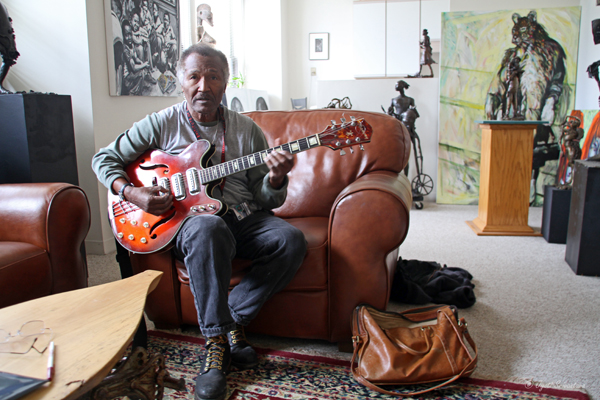 While I was taking photos, Preston took out his guitar and started playing! So I saw Preston Jackson as the musician.   He is truly a renaissance man making sculpture, painting, music and he also practices and teaches Tai chi! 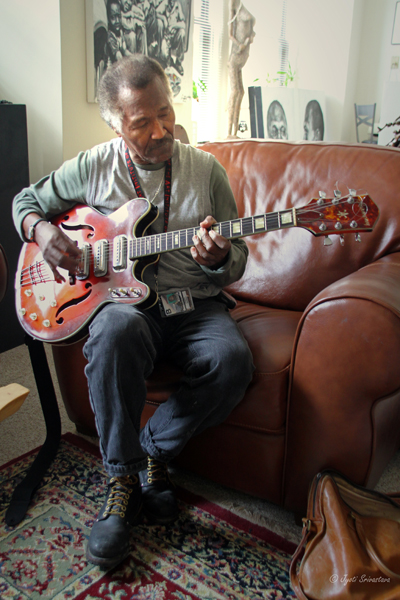 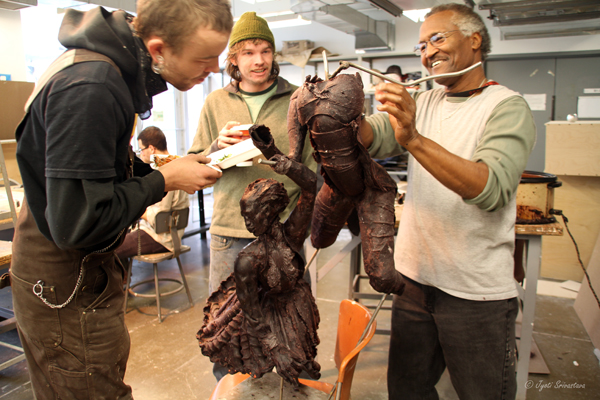 After spending some time in his studio, we went to his sculpture class at School of Art Institute of Chicago [SAIC]. I met with his students and had some informal talks with them. He was working on sculpture “Cake Walkers”. 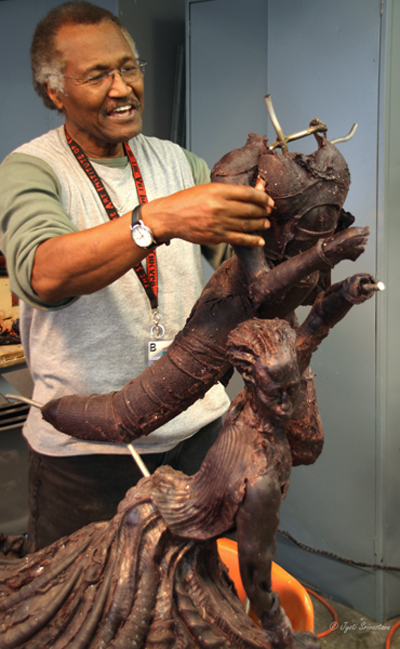 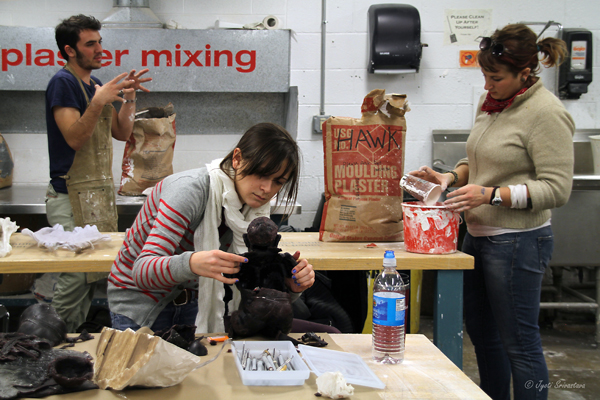 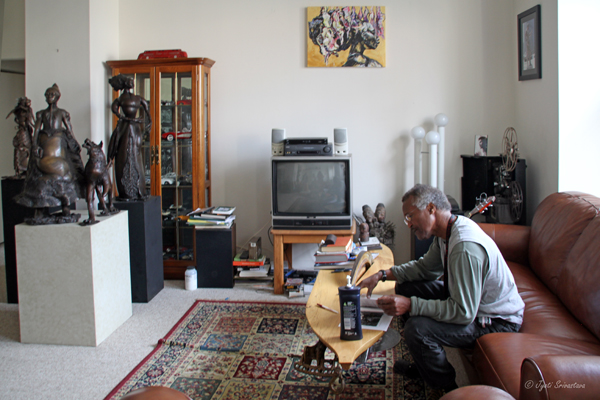 Below are some og his public art pieces I have seen.. 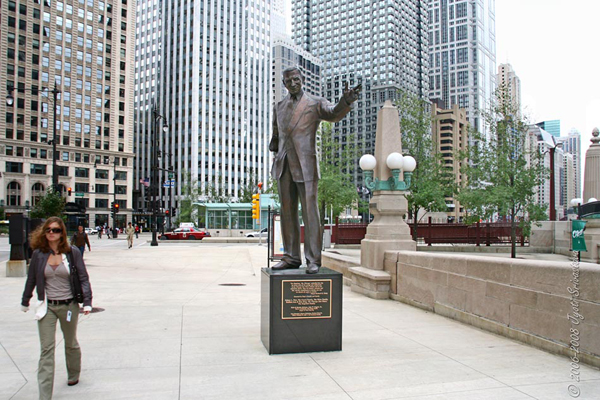 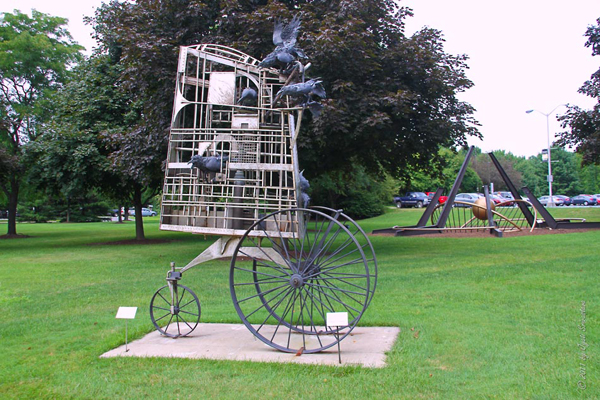 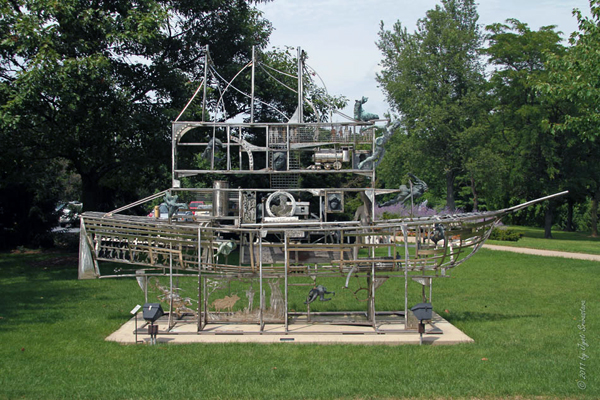