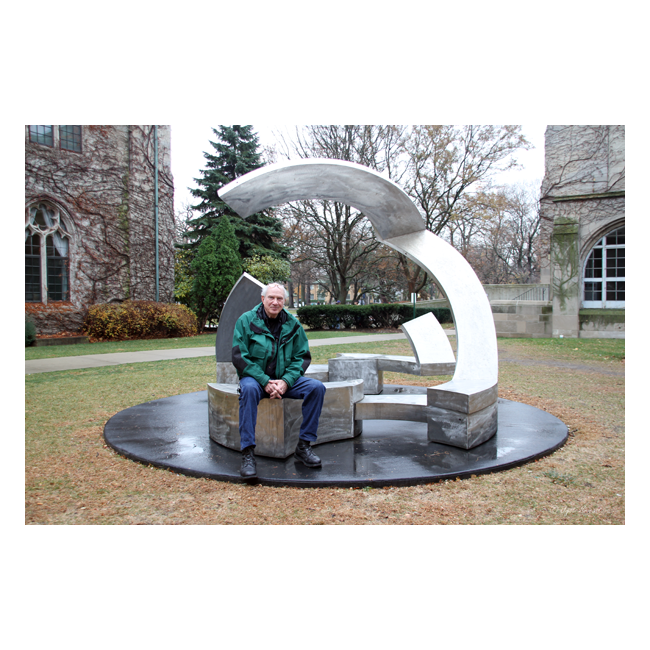 Nov 22, 2010: I was very late for the meeting with Ed McCullough at Dominican University. The Murphy’s Law that “anything that can go wrong, will go wrong” was at full play. The weather was dark and gloomy with showers, and I was almost about to cancel our meeting, when a slight sliver of sunshine made me change my decision. But then, my GPS refused to recognize the address, giving “location not found” result. That is something I had not anticipated. I am very poor with directions, and am helpless without GPS. Finally it did get the address, but then; the traffic was woefully slow. The rain shower had created bad driving conditions,  and there were with a four car accident on I-90 and the ensuing gaper’s delay.  To top it all, I took a few wrong turns.  Yeah, despite the GPS!  After much delay, I finally did reach Dominican University, where I was to meet with sculptor Ed McCullough.  This was the first time I was meeting Ed and I was already very late. But once I was there, all the Murphy’s Law disappeared and it was a great trip! 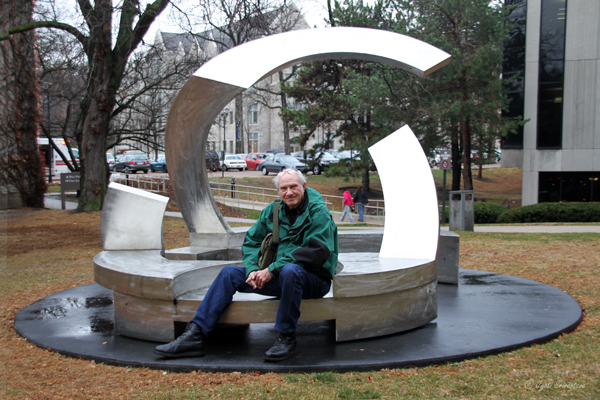 Ed was very gracious and forgave all my delays. Then we had a very interesting discussion on the public art scene of Chicago and sculptures in general. I have to say that the sculpture community of Chicago is a very friendly community, where each one seems to know each-other. Ed talked very fondly of the contributions of sculptors like Richard Hunt, Preston Jackson, Terrence Karpowicz, Christine Rojek, Adrian Calderon and many others, who endeavor to enrich Chicago sculpture community not only through their art, but also through their willingness to help others in the community.

Ed McCullough is native of Chicago south side neighborhood of Roseland. He attended Tilden Tech High School, 1949-51, thereafter attended Fenger High School, graduating in 1953. Ed served in the U.S. Navy, North Atlantic sea duty, 1955-59. He attended Illinois State University and earned a BA degree, 1962, and an MA degree, 1966, both in art. Ed has taught at many places. “I’ve taught in may places. I love to teach: seeing a student awaken to an idea, then bring it into reality, simply stops the clock with joy.”

As an artist, Ed specializes in large scale sculptures. Almost all his sculptures are meant to public art. They invite individual to come inside and be a part of it, whether they are standing alone or standing in a crowd.

“Arcs, circles, variants thereof: these are the forms I prefer working with. I like how they stake out boundaries, making connections with what’s-not-there, open spaces surrounding you. “What’s-not-there” – I go to considerable lengths to define where empty spaces begin, where they end, but, especially, the locations in between: that is where you might be standing, sitting, visiting. The so-called empty spaces come alive when you’re in or near them, they cease being where-nothing-is places, and you now own them, as do (so I’ve been told) they own you – this is the magic I’m after, this is the reason for my work.

Building my pieces is labor intensive and very time consuming. It is, however, the only way I know how to go after the “magic” that’s contained in space as I know it.”
– Ed McCullough 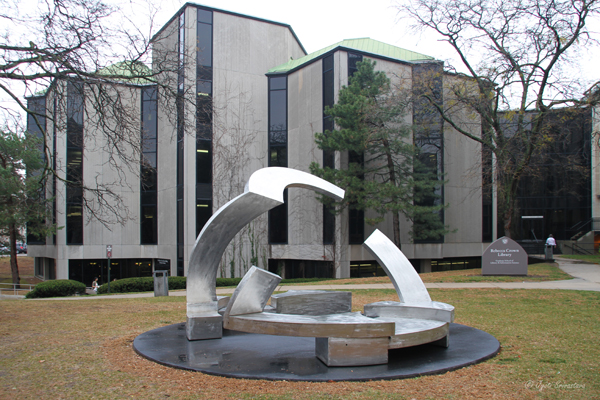 The sculpture we went to see at the Dominican University, is part of his Meridian series.
MERIDIAN SERIES: is a 10 part outdoor sculptures series by Ed McCullough. The series started in 1995, and it was concluded in 2011. These ten works are thematically connected. “The Meridian sculptures are grounded at a place, but they are also airborne; that is, the forms that define open spaces also release themselves and their spaces upward, and then.. bring it all back again, you with it”. All the sculptures in the Meridian series can be seen in his website.. click here..

After spending some time with Meridian VIII at the Dominican University it was time to head home.

Thank You Ed McCullough for your time!

It was great meeting you!

Here are some of the Ed McCullough sculptures that I’ve seen,
including some I saw after the meet at Dominican University, in November, 2010. 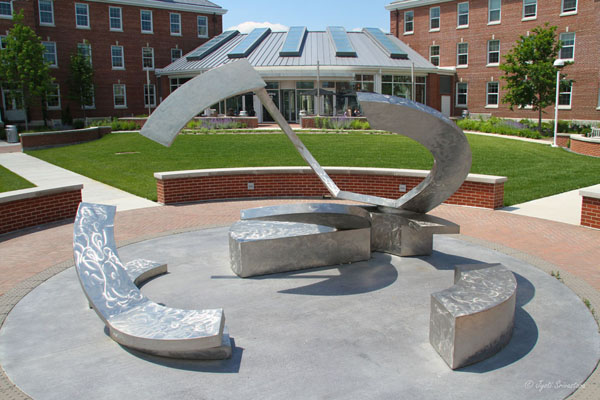 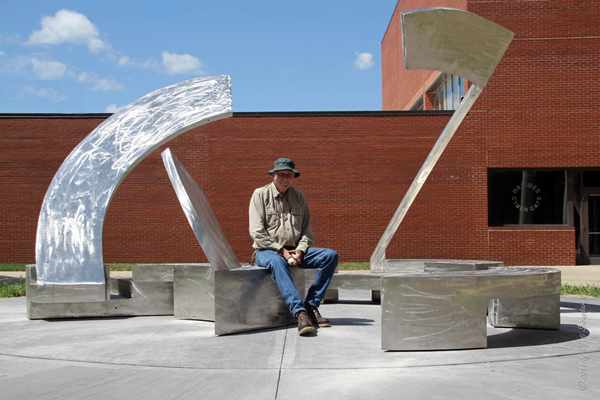 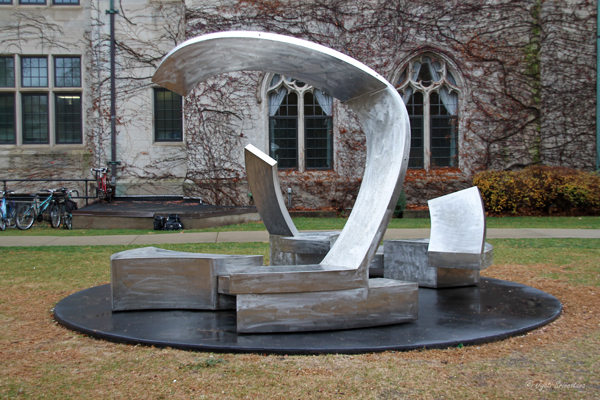 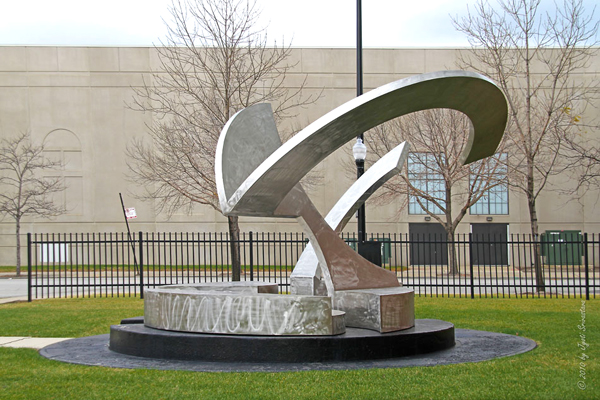 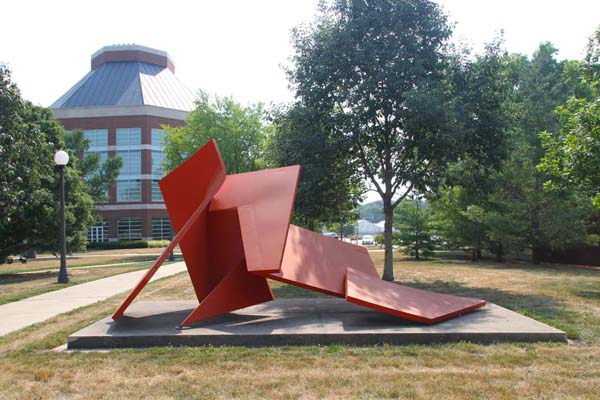