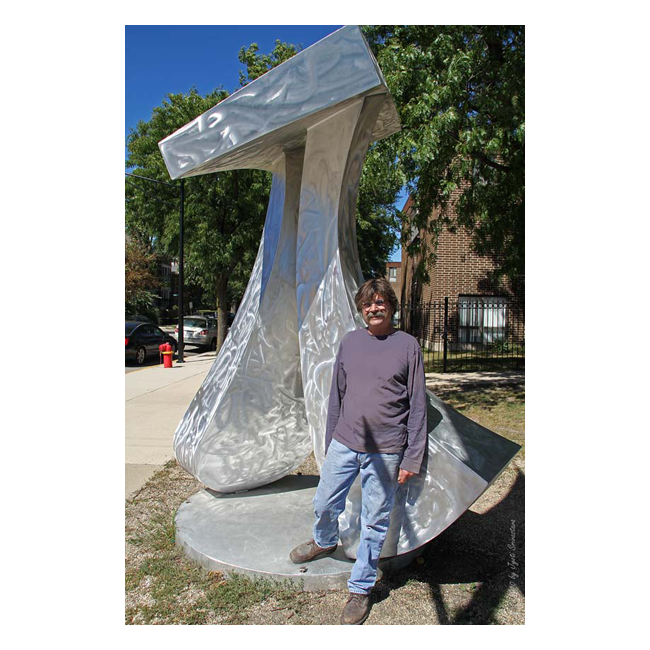 John Adduci was born in Chicago in 1948, received a Bachelor of Arts from Southern Illinois University in 1971, and a Master of Fine Arts from Arizona State University in 1975. Since then, he has been fabricating sculptures in aluminum, bronze and steel. His artwork have been displayed in numerous exhibitions and can be found at various public places and private collections.

Adduci utilizes the the fluidity of metal to express both movement and stability to outdoor sculpture.  In his words..
“Sculpture excites our intuition to explore, to see all sides. It is an on-the-street experience with art. That interaction challenges our right to take up space, it is powerful and audacious. By proximity, outdoor sculpture confronts, create dialogue and educates.” 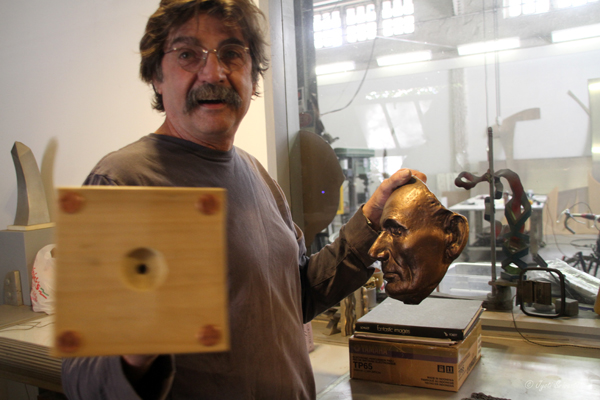 On September 10, 2010, I went to meet with John Aducci in his studio. The idea was to learn about his views on public art over some informal conversation and maybe see some art-in-progress. Adduci works from Sedgwick Studio in Old Town, Chicago. The studio – a former C.T.A. substation – with spacious interiors, concrete floors, brick wall, high ceiling and plenty of natural light is ideal for making large scale sculptures. Adduci has been a lifelong Chicago artist and has been working from this studio for more than 30 years. In fact, he along with two other artists, purchased this former CTA substation and converted it into an artist studio.

Adduci’s office is full with maquettes of his various installations, mostly in public places. His sculptures are always in-the-round intended to be explored and enjoyed from various angles. They are large and bold, in abstract geometric forms. Quite frequently they are humorous! Yes humorous! Especially his sculptures that are distortions of common words and symbols, like “My Pi”, “Oh Belisk”, and “Wacko”. They reflect his philosophy that art in public spaces can be exciting and interactive as well as elegant and graceful. His sculptures always have neat finish which is a testimony to his mastery over the skills required to fabricate metal sculptures. His artwork show a fine balance between movement and stability! His “Running Arch” at Purdue University campus, looks like a “Roman arch of triumph on the run”. This 22 feet high aluminum sculpture is ideal for a university campus, especially when students decorate it with a giant yellow tassel and pose in front of it for group photos! This is perhaps one of my favorites. 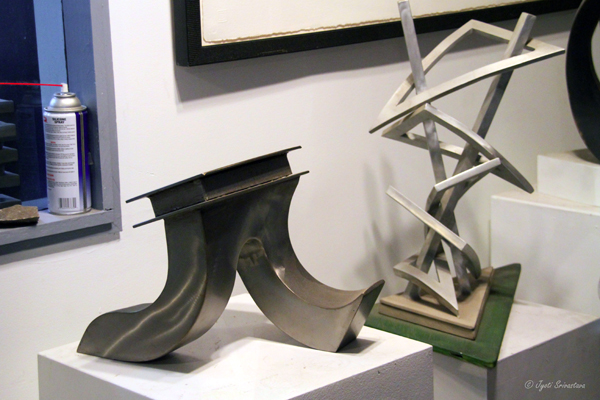 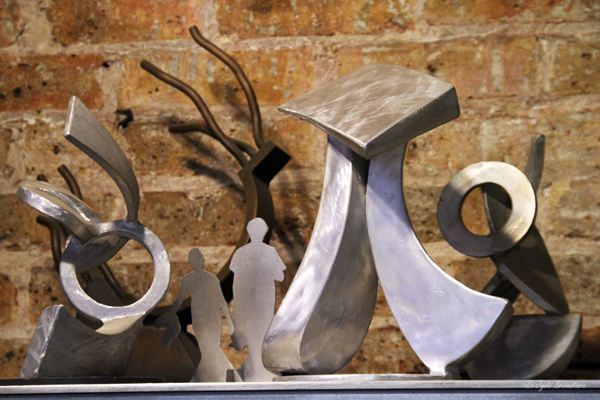 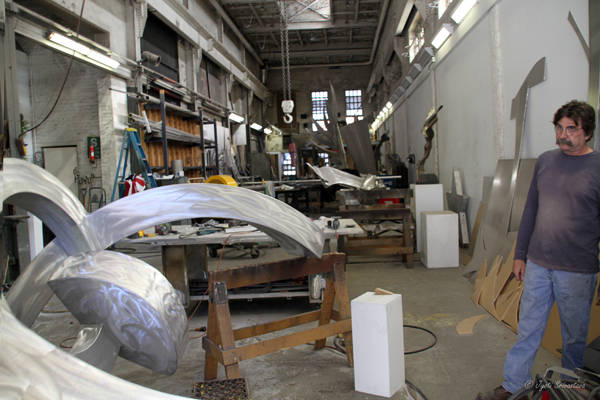 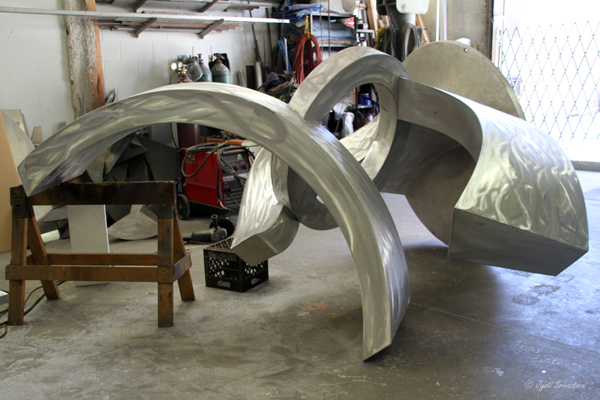 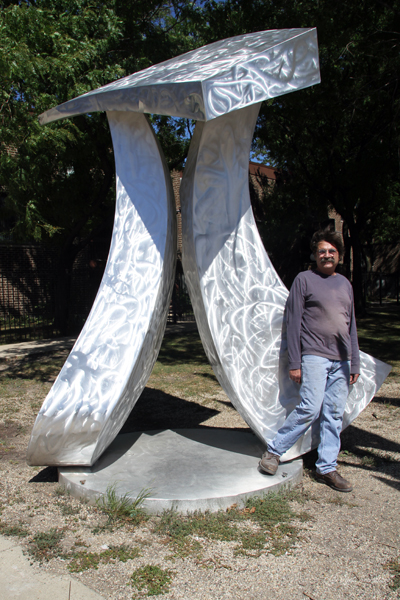 After spending some time in the studio, we went out to see one of his installations My Pi This aluminum sculpture [ 12’ x 9’ x 7’] was part of 2010 Lakefront Sculpture Exhibit [LSE]. The LSE website states..
Adduci’s pieces are fluid fabrications of aluminum, bronze and steel. In this piece he takes the versatile symbol π and urges the viewer to think deeper and differently about this familiar shape. The Greek letter’s significance range from uses fraternal to mathematical. Adduci’s “My Pi” attempts to broaden the symbol’s interpretations even further.

Thank You Adduci for your time! 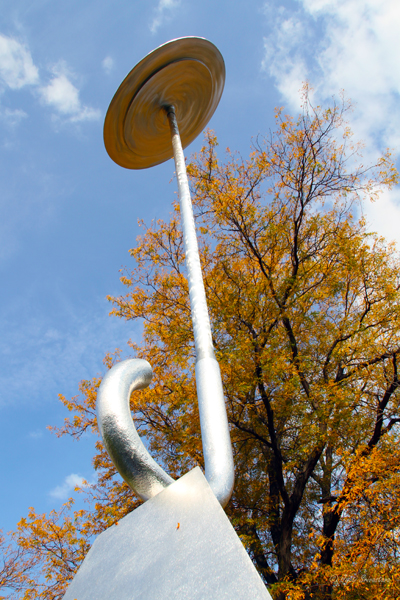 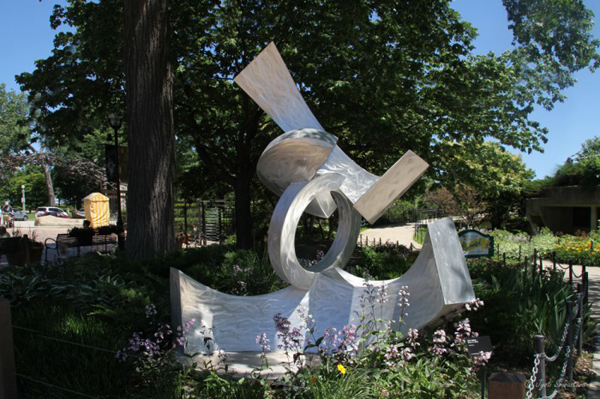 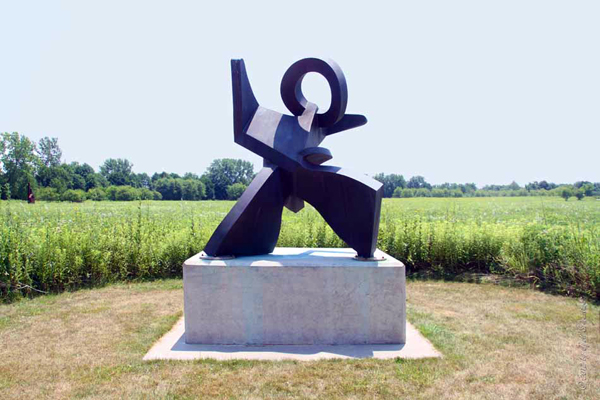 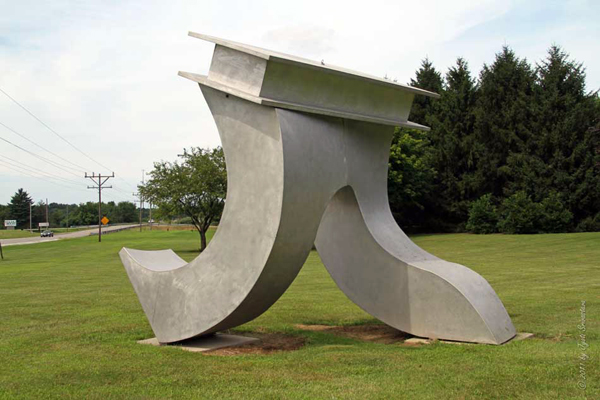 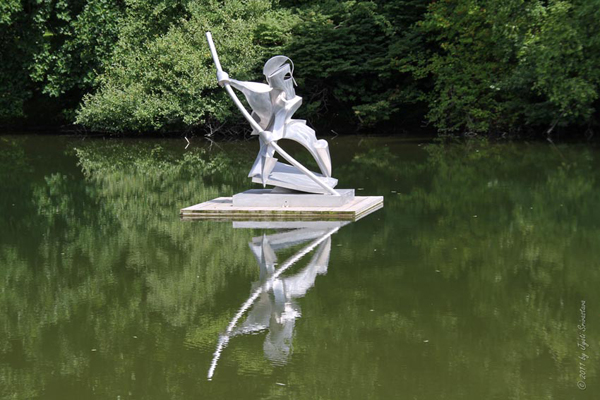