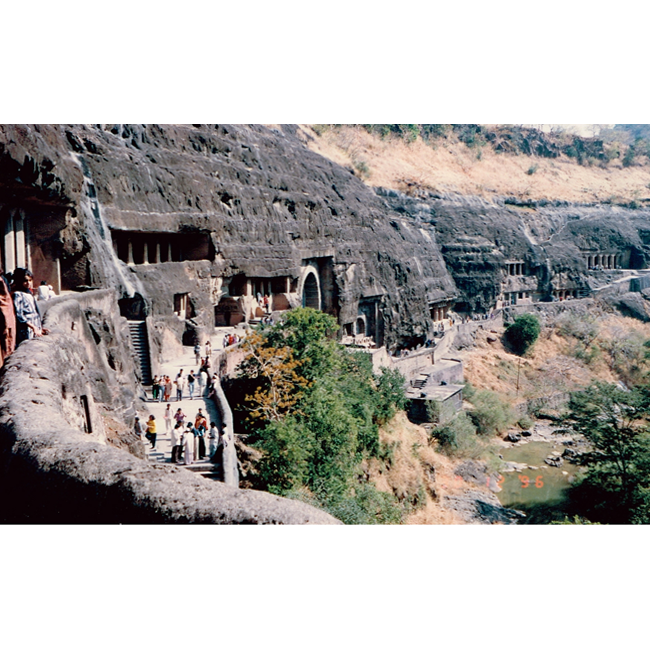 The site was inscribed on the World Heritage List in 1983.

The caves include paintings and sculptures described by the government Archaeological Survey of India as “the finest surviving examples of Indian art, particularly painting”, which are masterpieces of Buddhist religious art, with figures of the Buddha and depictions of the Jataka tales. The style of Ajanta has exerted a considerable influence in India and elsewhere, extending, in particular, to Java.

The site is a protected monument in the care of the Archaeological Survey of India.

In 1983, Ajanta Caves was inscribed by UNESCO in the World Heritage Site List. 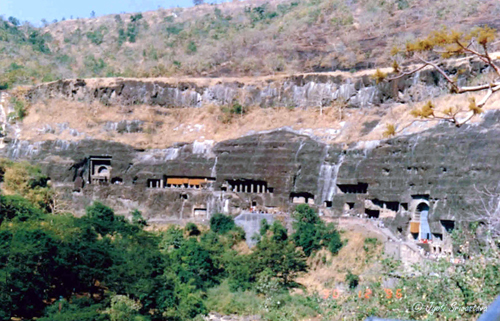 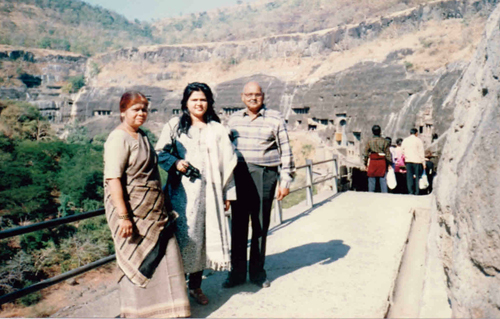 – The Ajanta Caves are cut into volcanic lava of the Deccan, in the forest ravines of the Sahyadri Hills of Maharashtra state. Deep in a narrow gorge flows the Waghora River.  Ajanta Caves are situated about 100 km north-east of another World Heritage Site – Ellora Caves.

– Ajanta Caves are Buddhist caves, whereas Ellora Caves are a complex of Buddhist, Hindu and Jain cave temples.

– Ajanta Caves consists of 30 rock cut caves. Note the caves are numbered from 1 to 29. However there are caves 15 and 15A, and both are separate, from different time-periods, making the total of 30 caves.  Ellora has 34 rock-cut caves.

–  The  caves were built in two phases.  The first group of Buddhist caves were created in the 2nd century and 1st century BC. These caves are datable to the pre-Christian era. The earliest among them is Cave 10, belonging to 2nd century BC. The second group of caves built around 400 to 650 AD during the Gupta period.  But Ajanta Caves were abandoned by 650 AD in favor of Ellora.

– Of the 30 Buddhist caves, 5 caves are Chaityagrihas [prayer-halls] and the rest 26 are Viharas [monasteries]. The Chaityagrihas are caves 9, 10, 19, 26 and 29. Rest of the caves were monasteries, which are believed to have been occupied by about 200 monks and artisans.

– NOTE: It is only around the 1st century AD, that the first statues of Buddha [or the first anthropomorphic representations of the Buddha] were developed. These were absent from earlier phase of Buddhist art, which preferred to represent the Buddha with symbols such as the stupa, the Bodhi tree, the empty seat, the wheel, or the footprints. But the innovative anthropomorphic Buddha image immediately reached a very high level of sculptural sophistication. So coming to Ajanta Caves, the first group of caves [ 8, 9, 10, 12, 13 and 15A] built around 2nd and 1st century BC, do not have any statues of Buddha. The Chaityagrihas during this phase [caves 9 and 10] had stupas, but no Buddha statues.

– Ajanta Caves were gradually forgotten until they were rediscovered by the British tiger-hunting party in 1819.

Some of my favorite caves are:
Cave 1: Datable to 4th – 5th centuries A.D. A seated Buddha in dharmacakrapravartana mudra (preaching attitude) in the sanctum, and is flanked by murals of two great bodhisattvas Padmapani and Vajrapani. On the right, holding a thunderbolt, is Vajrapani [or Avalokitesvara ], the most important bodhisattva in Mahayana Buddhism. On the left is Padmapani, holding a water lily.

Caves 9 and 10: Both dated 2nd century BC. Both are chaityagriha / Hinayana prayer hall. Cave 10 is believed to be the oldest cave temple at Ajanta.

Cave 17 – A Mahayana monastery covered with many well-preserved wall paintings. Maidens and celestial musicians are on the ceiling, and Buddhas, celestial guardians, goddesses, lotus petals and scroll work adorn the doorway.

Cave 19 – Chaityagriha / Mahayana prayer hall. Datable to fifth century A.D. and could be the gandhakuti. The stupa is carved with a standing image of Buddha. This cave is known for it sculptural grandeur of the façade and particularly the two life size Yaksha images on either sides of the chaitya vatayana (arch). The hall has painted depictions of Buddha in various postures.

Cave 26 – chaityagriha / Mahayana prayer hall. The highlight is a large carved statue of the reclining Buddha [Mahaparinirvana] , representing his moment of death. Below him, his followers mourn his passing; above, celestial beings rejoice. The cave also contains a stupa with an image of the Buddha in a pavilion. 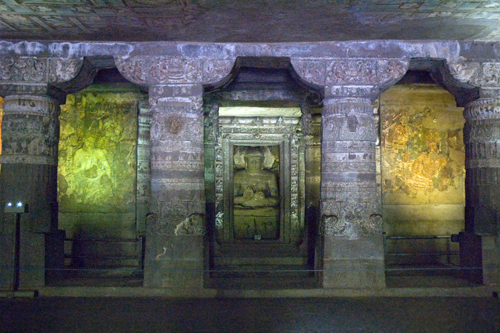 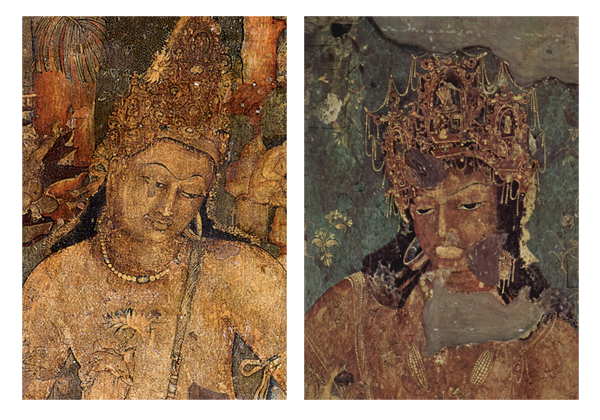 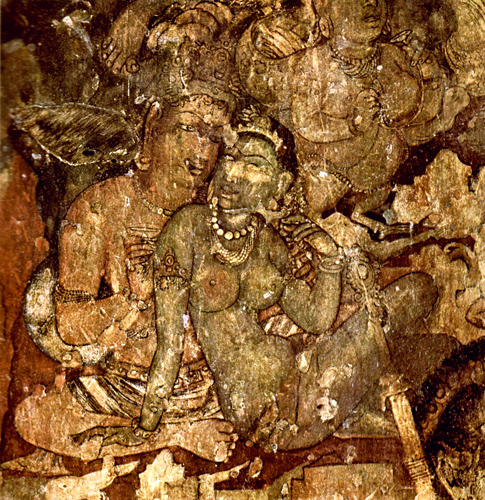 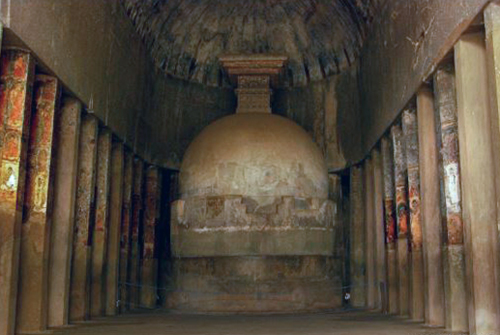 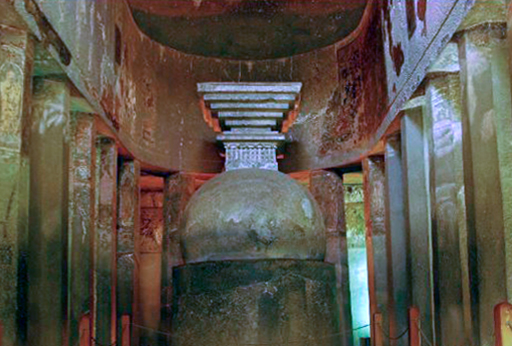 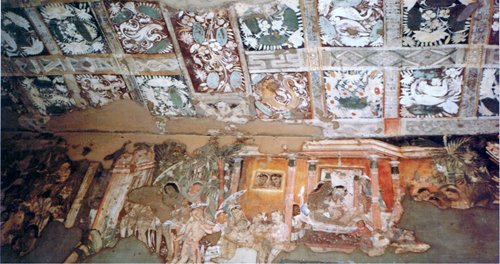 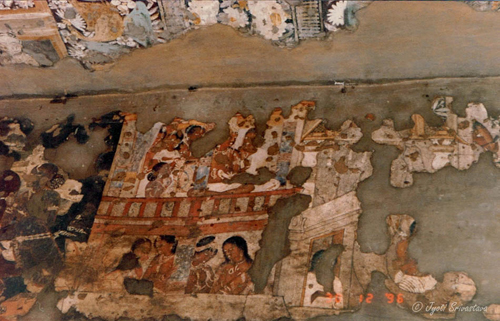 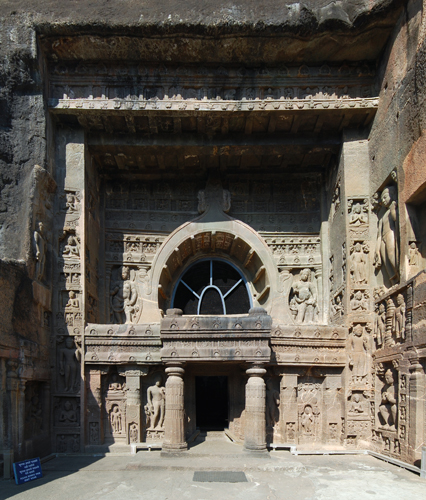 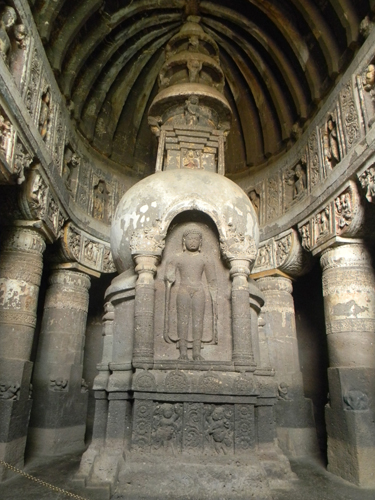 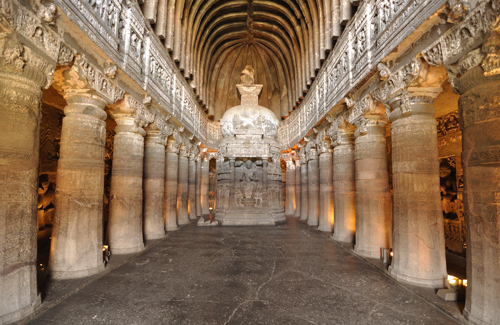 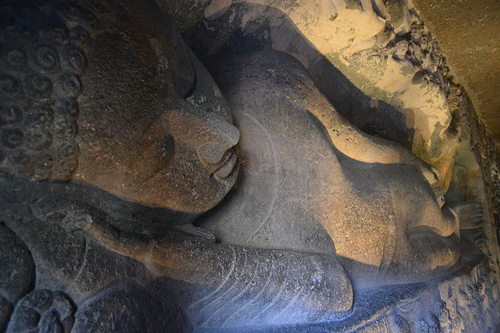 Few more images, but I am not too sure which cave from.. 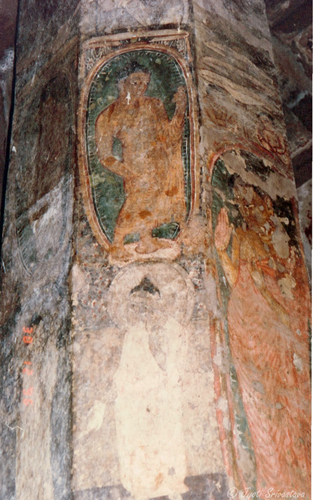 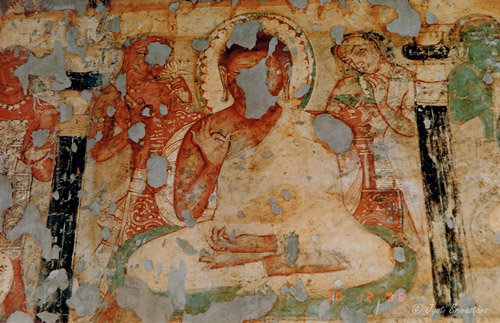 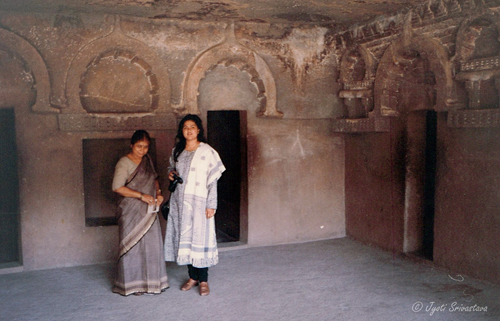 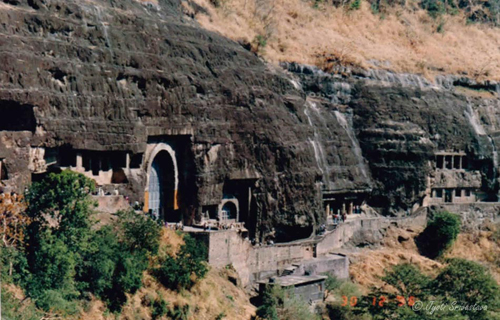 Vacation: My trip to Ajanta and Ellora Caves was in Dec 1996, with Bade Mama and Mami.