2014: Opening Reception of “1004 Portraits” – by Jaume Plensa at Millennium Park 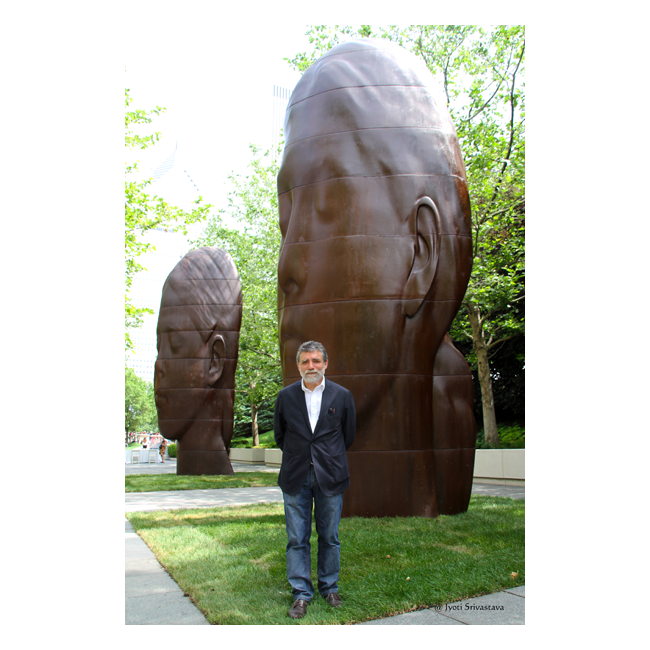 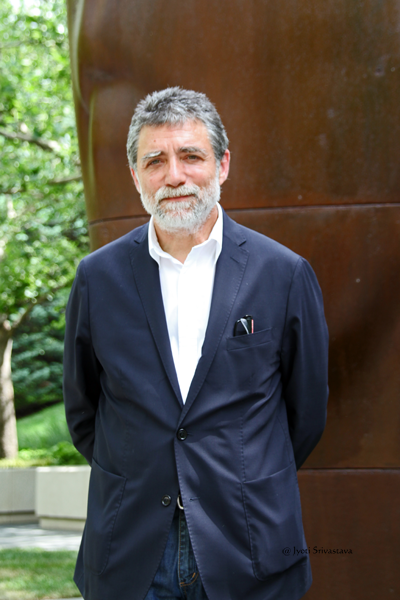 “My work is intended to celebrate and pay tribute to the most fundamental element of public square: People”.
– Jaume Plensa.

“Crown Fountain is the 21st century definition of public square, filled with people, laughter and the wonder of discovery”.
– Bill Curtis at the Opening Reception of the exhibition.

Jaume Plensa created Crown Fountain as a Utopian Project.  At the Press Conference he said: “At the moment I created the piece it was completely Utopian Project. My intention to send the message of Utopia, lets say, to create an empty space where people could fill-up and enjoy. A place for freedom. A place for everyone – does not matter origin, age, whatever – could join and enjoy together. And its a celebration of life! Ten years after, I am still happy that the fountain is working”.

As Millennium Park celebrates its 10th anniversary, four new figures have been installed in the Park. Jaume Plensa calls it 1004 Portraits; as these four new faces are an addition to the 1000 LED portraits in the Crown Fountain. The first sculpture, “Looking into My Dreams, Awilda” stands at the entrance of Millennium Park at Madison Street and Michigan Avenue. It stands 39-foot tall and is made of resin and marble dust. Three other portrait sculptures, “Laura”, “Paula”, and “Ines”  are installed in the South Boeing Gallery. These stand 20 to 23 feet tall and are made of cast iron. 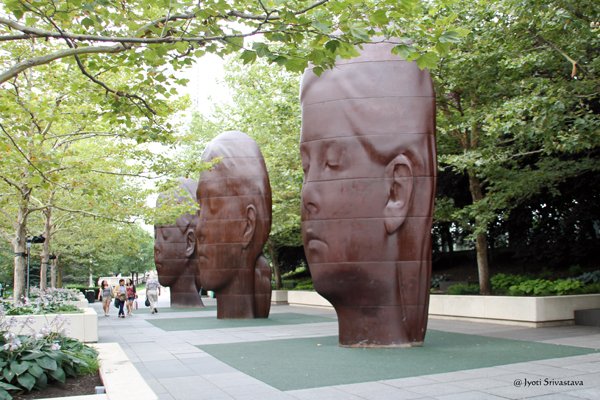 The girls Laura, Paula, Ines and Awilda are from Barcelona, where the artist lives and works. Their age is between 7 to 14 years. Plensa’s explains that his affinity for portrait sculptures are an extension of his work on the Crown Fountain. He said, “One of the important things to happen, thanks to the Crown Fountain, is to discover the beauty of portraits. Filming the people in the town I discovered how beautiful it is to penetrate into a person through the face. Then I decided to continue doing portraits. But I decided to do only portraits of girls between 7-8 to 14 years old, that moment in which girls are no longer kids, but also not woman, or adults. I always feel that future is female and also memory. It means that men are just an accident inbetween….. In the past 9-10 years I took about 27 portraits. I am using those portraits as blank canvas, in where I could express different ideas”.
“All the faces have eyes closed. It is because I try to emphasize the interior of everyone of us. They have this strange dreamlike position like having a dream. I invite everyone in Chicago to dream with me and my heads in the Millennium Park”.

One of the most interesting features of these portrait-sculptures are the hologram like quality. Jaume Plensa explains ..
“One of my dreams, which was to compress the volume. You feel that volume in there, but in much less space. That comes everytime I have a coin in my hand. I can see the flat face of somebody and I say what happened on the other side? There is nothing. Where is the rest of the head? Probably because its too thin, the coin is so thin, there is not room enough for all the head. I was working hard trying to compress that head, until I got something beautiful, [it was hard] because of the very physical material as cast iron. I really got this idea of transition. You have the complete volume, but when you are walking, the volume is going to disappear, slowly and slowly it becomes thinner and thinner. But then, when you are on the other side, the volume is back again.” 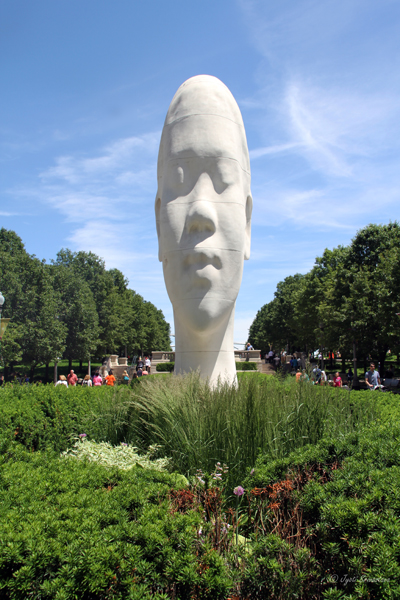 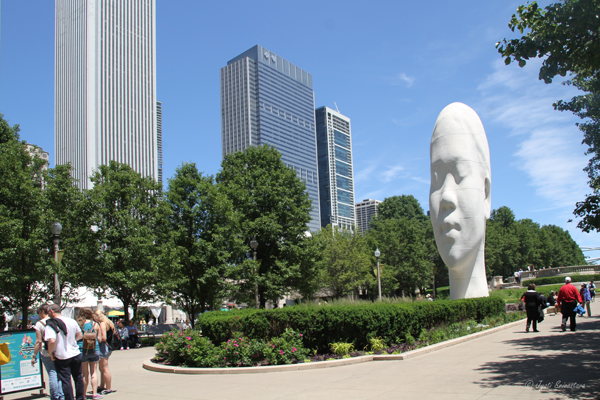 Talking about the portrait “Looking into My Dreams, Awilda”, Plensa says that it has the same proportions as the Crown Fountain. It was a project he did two years back for Rio de Janeiro. It was another of his dream project. “I remember when I was 20, I lived in Rio de Jeneiro, and I said, one day I have to do a piece over here, but in the water. I have been waiting 36 years to do it. But I got it. I thought it was a fantastic piece for Michigan Avenue, because we have the Lake on one side and then facing Madison. Well I am so pleased about it”.

Plensa also talked about the location of Awilda at the Madison Street. He emphasized how the street was important as it divided the city into North and South. He had a very philosophical approach to the concept to duality, which he explained as.. “I have long been working with the idea of duality. Like the Crown Fountain – body and soul, north and south, nature and spirit, or maybe light and darkness”. He had once said about Crown Fountain, “If the two towers are the body of the fountain, then the faces are the soul”. Coming back to the Madison Street he said, “It seems very neutral, very humble street, but for me, since I know Chicago for 17 years, I am fascinated by the street, because it splits the city into north and south. Madison is a very enigmatic street for me. Awilda is facing the Madison Street”. He really liked the location. He said, “When you are at a distance in Madison, you have an intuition that there is something floating in the air, because the piece is very wide, sometimes gets completely integrated with the sky and the tees, and when you approaching the park, you look into the face and it becomes more and more visible, and clear. It seems in some ways like a hologram floating, like a soul floating in the park. To me, it is very important the the sculpture is not only filling up the space. It is important that the sculpture are expanding the space, there is certain type of energy to it”.

The installation of the works are on loan from the artist. It is co-presented by Millennium Park Foundation with the Chicago Department of Cultural Affairs and Special Events [DCASE], and is sponsored by The Boeing Company, with the support from the Richard Driehaus Foundation.

At the Opening Ceremony, Lester Crown introduced Jaume Plensa. It can be seen in the video below..

If anyone wants to hear still more from Jaume Plensa himself, here is more of video coverage of the Press Conference with Jaume Plensa

Jaume Plensa also talked about Crown Fountain. When asked if the faces on the fountain were going to change, he responded with an emphatic, “No! No! No! No! Not at all!” He went on to say, “We took so much energy to fill 1000 faces, I cannot imagine to do more. In any ways, one of the main concepts of my project at that time was to use the piece as an archive for the city. That means, to film people living in the town and to add faces regularly. Okay in the last ten years it was not possible. It was complex, maybe in the future. But I have to say, when the piece was done, I also understood that every face is not really a portrait of anyone specific! Its an icon and it could represent anyone. And I think it is very important. It is more general. When you see a kid, it is not specifically that kid. It could be anyone, or your grandfather, or father, or your wife. And I think its a very beautiful part of the project”. 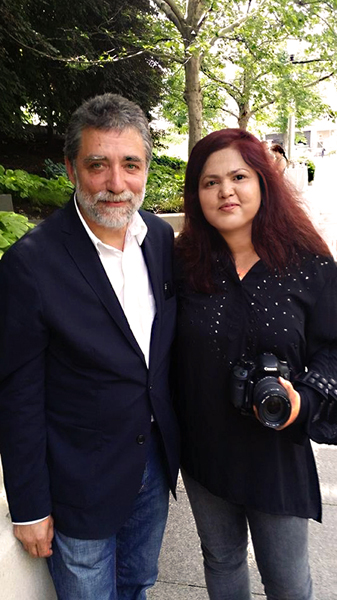 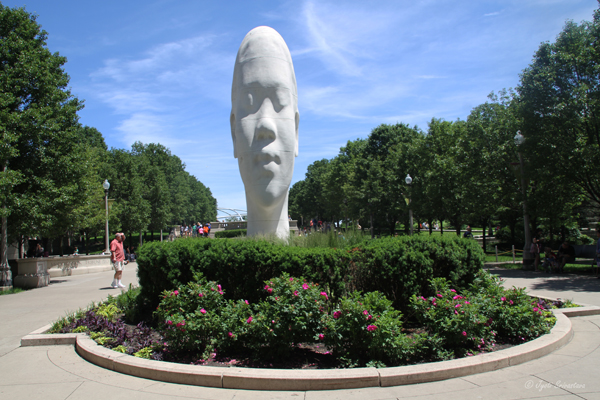